The Recordist as Enunciator; Looping in the work of Delia Derbyshire and Daphne Oram
Lyn Goeringer / Michigan State University 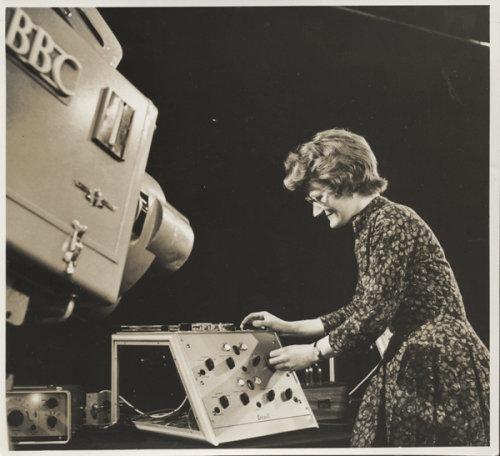 Daphne Oram in a television studio

The familiar bass line from Queen and David Bowie’s “Under Pressure” sounds.1 We are denied our expectations, and at the moment when the piano would enter, we hear the voice of Vanilla Ice.2 The song unfolds, and, the use of the introductory musical phrase from “Under Pressure” loops and is contextualized differently by the words rapped by Vanilla Ice in “Ice Ice Baby.” The piano does eventually come in, and we are reminded that the loop is there to imply pressure but the ability to remain cool. This signifying moment is to direct us towards an appropriated meaning, drawn out by rap artist Vanilla Ice.

Looping is integral in electronic music and sound art. Audio loops can be made using recorded materials that are then repeated in succession. In the instance of “Ice Ice Baby,” the listener is provided a culturally recognizable symbolic referent to another song, “Under Pressure” by Queen and David Bowie. In this article, I will discuss how it is used, and how looping practices can be analyzed using enunciation theory. I will be looking at the work of Émile Benveniste and Anette Vandsø to consider the music of Delia Derbyshire and Daphne Oram.

Anette Vandsø proposes the use of enunciation theory as a methodology of analyzing sound art, illustrating this approach using Alvin Lucier’s work “I am Sitting in a Room,”3 a sound art piece that is created by stating the same phrase and recording it in repetition over time in the same location4 . I propose to expand on this notion by considering the loop as a site where enunciation is critical, and meaning of a loop can be determined through enunciation and application of the materials in repetition. Émile Benveniste’s definition of enunciation is useful here, in which “enunciation is the enactment of language through an individual act of use”.5 In this approach, we must concede that music and sound can function as a language, where intonation and phrasing of materials can be seen as a form of enunciation. Because electronic music is a form that may not easily work within common practice standards of music making (notes, rhythm, etc.), we must consider this idea even further.

Some electronic music relies on the act of recording to create its materials rather than using traditional instrument conventions. The roll of enunciation may at first appear abstracted, particularly as enunciation theory is often reliant on deictic signifiers, such as ‘I’, ‘you’, and ‘they’. In recording, the referent is more immediate, as recorded sound is captured from the perspective of the listener-recordist as they have heard something in a particular way, recorded the sound, and then disseminated it through other means. Deictic markers, however, are not specified verbally.6 There is an implied enunciation; a voice has arisen in the capturing and re-presenting of materials. Through the act of listening, the recordist has chosen an instance to appropriate a moment of language (sound), and then re-present it to us from their perspective. Anette Vandsø proposes, within the context of the “implicit narrator”, that this system does not refer to the artist or their intention, but to imply that in the act of recording, the artist “doesn’t transmit its content in an unmediated, direct way, but reflects a number of choices”.7 I would counter that this is furthered when we consider the potential semiotic relationship between recorded or sampled materials and culture or society at large.

In the work of Delia Derbyshire and Daphne Oram, it’s possible to consider that the recorded works, relying on electromagnetic tape looping techniques, propose two different meaning constructions that are dependent on the application of loop. Looped materials become culturally significant in the work of Delia Derbyshire because of their role as a sonic signifier, particularly in the arrangement of the original theme song for Doctor Who.8 In the work of Daphne Oram, we have the construction of new sounds that become a signifier of objects whose meaning and implication can only be understood through repetition of the sound itself, as illustrated in her commercial short Tumblewash.9 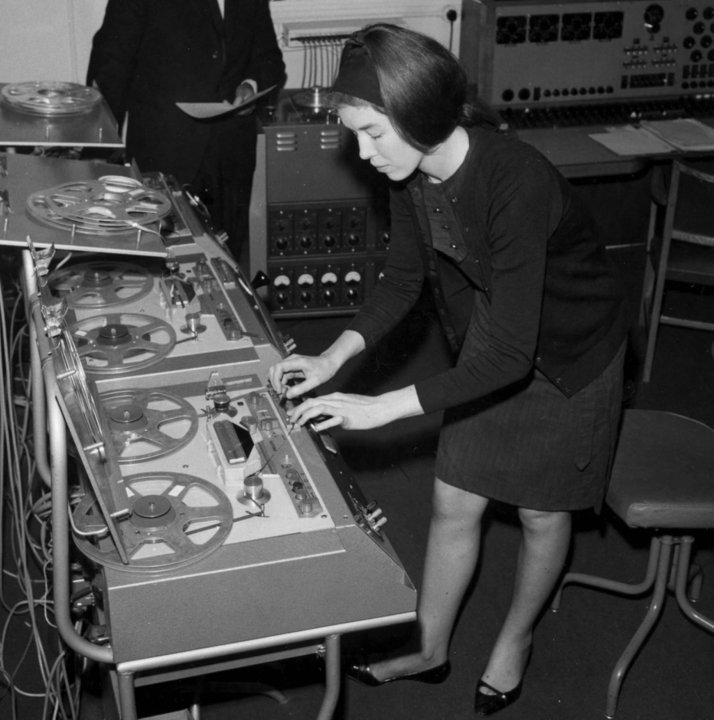 Both the theme song for Doctor Who and Tumblewash require looping in their formal construction, though the application of looping is different. In the Derbyshire arrangement, the piece begins with a rhythmic motif, that shifts pitches harmonically under a melodic tune. The bass line was created by making a recording of a string instrument on electromagnetic tape, changing the tape playback speed to shift the pitch, relying on physical looping of the medium at varying speeds, to convey tonal information. Here, we can consider an enunciation based on temporal speed as having a direct impact on the overall message and content of the sonic material. This temporality is created through enunciation, in the manner of its re-presentation. In its application, the only way to impart the needed meaning, that of a specific pitch, must be imparted by shifting the temporality — by speeding up, slowing down— and thus enunciating the sound differently. The act of enunciation creates the temporality, where the manner in which the statement is uttered creates the time conditions of the present in which it is manifested.10 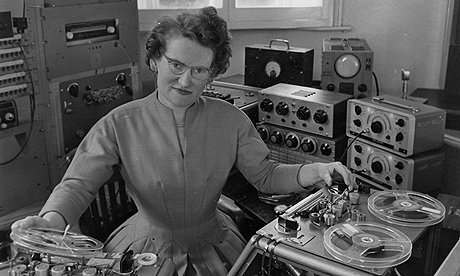 Daphne Oram brings us a different approach to the recordist as enunciator. In Tumblewash, we listen to a sound of water sloshing about, while high-pitched sounds alternate in pitch over it, eventually becoming melodic. As the commercial continues, a voice over states, “Do your wash the new way, the Tumblewash way”.11 It is here that we confirm the sounds we are hearing are signifying the washing machine of the future. The looping in this piece become signifiers — the looped water sound implies mechanical motion, while the electronic tones sounding above imply the future, where our laundry is automatic, timely, and above all, part of the space age. We are provided two levels of information to help us in our analysis: sonic and verbal. We are provided further meaning of the loop through voice over, which indicates what is implied by the sounds. This differs from the Derbyshire arrangement as the signification is direct, reliant on the symbolic meaning of water and time.

In each of these examples, the loop functions differently. In Derbyshire’s arrangement, the loop that holds a dual purpose: to provide us awareness of time, and to complete the musical function of harmonic pitch relationships. In this piece the implied meaning of the loop is through enunciation, through temporal shifting creates meaning and facilitates understanding of the piece through the perception of pitch changes over time. With Oram’s work, Tumblewash, we are given a different relationship to the loop, one that indicates labor and time saving machinery. In this moment, the context we are provided through enunciation gives us an indication why the loop is critical: It is not only sonically interesting, but through repetition, the sound conveys information the listener will find relevant. It is through the enunciation, the context of the loop, where we find our meaning.