Sound history is cultural history. And a giant part of our history has yet to be preserved, researched, or taught in our classrooms. Our omissions are disproportionately distributed among the local and the liminal, the pastoral and the public, and marginalized and minority experiences. Sound trails continue where paper trails end, and we have an opportunity to provide new insight into the cultural history of the U.S. thanks to recent innovations in sound preservation technology. The Radio Preservation Task Force (RPTF) of the National Recording Preservation Board (NRPB) of the Library of Congress (LOC) is a growing 125-faculty member and 275-archive Digital Humanities initiative working to broaden the historical record by unearthing, mapping, and making available materials that that chronicle experiences neglected in existing historical accounts, such as minority, political, orientation, social advocacy, and educational groups. Perspectives and events that have remained unaddressed by the primary document record will receive new recognition by focusing preservation on the conversational and community building character of noncommercial and local radio history. 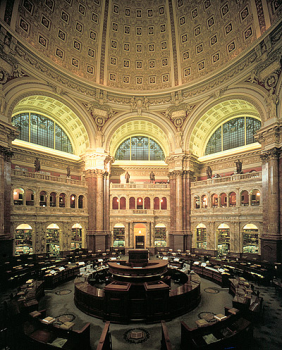 The Jefferson Reading Room at the Library of Congress

A historical marvel of nation-building, serialization, and aesthetic innovation, radio has also been utilized for multiple purposes beyond entertainment: from education, to a technology of opinion-formation, to a medium for political problem-solving. Much of the early history of the ether consists of distance learning broadcasts, public forums, and civic debates, and in addition to local theatrical and drive time programming the task force is concerned with making these important historical records accessible for the first time. To frame the project in historiographical terms, the RPTF is approaching radio history as a study of what the Birmingham school might call the genealogy of how strategies for circulation of discursive codes, as representations, became central to an expanded concept of the public sphere that included popular culture. If we accept the historiographical argument that content representations are also implementations of discursive, political, and industrial strategies, then radio might be viewed as a medium in which institutional and intellectual projects endeavored to communicate with and persuade community members about a specific perspective or initiative. In this way, radio history has the capacity to reveal the development and dissemination of cultural aspirations and viewpoints, and its consequent archive can be understood as a series of concurrent media advocacies that sought to define conditions of social attunement.

Beginning with these guiding historiographical tenets, many dominant debates that we associate with the academic study of media theory, audiences, and media industries suddenly propel radio into a central position of interest. For example Paul Lazarsfeld and Theodor Adorno’s argument over how quantitative survey research of educational broadcasting might promote progressive goals is an ongoing debate between qualitative humanists and social scientists. Wilbur Schramm’s post-war construction of communication departments provided a stable home for educational broadcasting, early public policy analysis, and anti-fascist projects UNESCO and Voice of America. CBS president and Lazarsfeld protégé Frank Stanton built a huge production culture of writers, producers, and developers who defined radio as a civic medium for commercial practice. And in many ways, this paradoxical concept, commercialism as civic practice, is for better or worse the major successful media advocacy of the 20th century. Our memory of media history sometimes seems entirely inseparable from this logic of consumerism, to the extent that the discipline is overwhelmingly focused on affirmative or resistant reactions to what amounts to a very small sampling of the experience of media, as it has been facilitated by national and transnational entertainment. 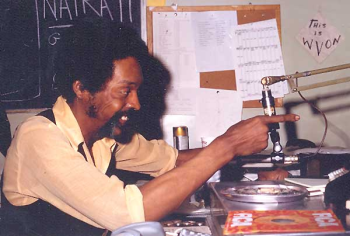 Soul Music/Civil Rights Legend DJ Herb Kent at WVON-Chicago
Preservation activities are beginning to show us that a paradigm shift might be necessary within the discipline, one focused on a dramatically expanded notion of what media has meant, and how it has mattered. The expansion and new availability of primary sources will provide content for graduate researchers to write about previously hidden origin stories, genealogies, and struggles for diversity. It’s past due that a media advocacy take place within the discipline itself to promote new visibility for historically subaltern groups omitted or maligned by commercial mass media representations; an advocacy that would seek to reinterpret “media” history not only as the legacy of a robust and impressive entertainment-based infrastructure, but as an exegesis of how communications technology has been functionalized as a tool of discursive blocs. If radio is approached as a history of, for example, how civil rights groups have utilized communications for non-theatrical message circulation, we might re-orient our relationship to “old media” as a study of the sound of mediated social centers, as an apparatus whose practitioners sought not just a “target” audience, but purposive listeners.

The perceived historical record is primed to grow significantly over the next several years thanks to our mandate from the National Recording Preservation Board, NRPB Chair Sam Brylawski, and our large consortium of media researchers headed by Project Director and eminent historian Christopher Sterling. Digitization, education, and distribution initiatives will increase archival representation and access, and in truth we still don’t know what or how much we’ll turn up. But we do know that as the golden age of library science continues to streamline methods of preservation, that (without exaggeration) tens of thousands of historical statements will be introduced into circulation over the next 3-5 years.

As I write, the RPTF1) is conducting a second round of aggregation of participating archives. Our current participant consortium is impressive – besides the Library of Congress we will be working with the National Archives of the U.S. and Canada, Our Coordinating Archive – The Library of American Broadcasting, The Paley Center, Peabody Awards, Stanford Archives of Recording Sound, Syracuse Belfer Audio Archive, Newseum, and the Wisconsin Center for Film and Theater Research, among many, many others.2 But we believe that many of our most important finds will turn up in personal collections, radio station attics, library basements, and historical societies. Over the next 3-6 months the RPTF will be working to locate and nearly double archive participation to include these equally important repositories, culminating in a conference to discuss preliminary findings at the Library of Congress.

Radio Preservation Task Force
Besides archive aggregation, over the next 16 to 24 months the task force will commence multiple projects. Our first mandate is to develop a metadata interface so that educators, radio enthusiasts, and researchers might locate content specific recordings. Building from these forthcoming analytics, we plan to promote the preservation of radio’s cultural history through two major initiatives. The first will be to construct a letterhead board of curators, federal and state archives, and media historians to identify and pre-designate archival locations to receive endangered collections before they are discarded or incinerated. Our second major initiative is to promote digitization and access through the creation of content-based research caucuses comprised of archives and research specialists. Our caucuses will work together to identify the most significant newly unearthed recordings, and apply for preservation and digitization grants. As the task force works to address historical gaps and secure safe sites for historical materials, our caucuses will commence a national educational initiative with multiple digital projects, including the American Archives of Public Broadcasting, to provide content analyses, syllabi, and curated exhibits for newly circulating recordings. Looking ahead – 24 months and beyond – the RPTF hopes to work with copyright organizations to make selected sound digitizations available for educational fair use.