Late Invites to the Party: What’s Still Not Working for Latina/os and TV
Mary Beltrán/ The University of Texas, Austin 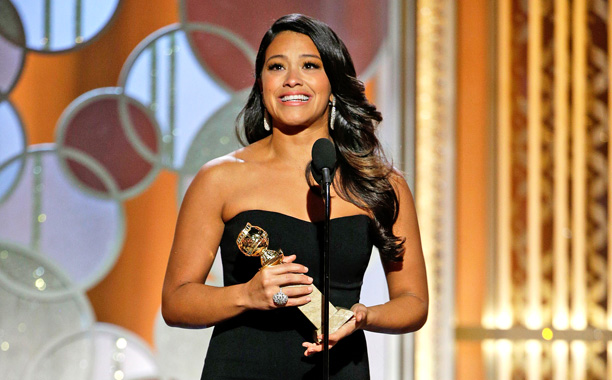 This year’s Golden Globe Awards, which aired Jan. 11, included a notable achievement for Latina representation when Gina Rodriguez, the Puerto Rican star of the CW breakout dramedy Jane the Virgin (2014+), won Best Performance by an Actress in a Television Series-Musical or Comedy. Clearly surprised to have won, Rodriguez accepted the award with a poignant speech that underscored the importance of her starring role while Latina and Latino characters are still often left out of U.S. television story worlds. “This award is so much more than myself,” she told viewers. “It represents a culture that wants to see themselves as heroes.” Rodriguez expanded on her comments to the press backstage, noting that her win allowed Latina/o viewers “to see themselves invited to the same party” of American television.

While I find Rodriguez’s win and Jane the Virgin’s critical success hopeful signs, the snail’s pace growth of Latina/o visibility in television is otherwise discouraging. A 2014 study by Frances Negrón-Mutaner and other researchers at Columbia University found there were no Latina/o lead roles in scripted television series in 2013.1 From this perspective, Jane the Virgin and Cristela, both launched in 2014, are signs of progress, but only from invisibility to—slight visibility. The number of Latina/os at the Golden Globes to hear Gina Rodriguez’s speech also is telling. Aside from the Jane the Virgin cast and the glamorous Jennifer Lopez and Salma Hayek, both of whom served as presenters, the only Latinos to be seen were Mexican director Alejandro Gonzalez Inárritu and his fellow Birdman (2014) writers, who won in the Best Screenplay category, and Louis C.K., nominated for his performance in Louie (2010+), who largely ignores his partial Mexican ancestry. Where are the Latino John Hamm and Wes Anderson, the Latina Mindy Kaling and Lena Dunham? Not invited yet.

While it was not the first time a Latina or Latino actor was recognized at the Golden Globes or Emmys for a recurring role in a TV series, the number in this esteemed club is woefully small. America Ferrera won both awards for Ugly Betty (2006-2010) in 2007, as did Edward James Olmos for Miami Vice (1984-1990) in 1986, while Jimmy Smits won an Emmy for L.A. Law (1986-1994) in 1990 and a Golden Globe for NYPD Blue (1993-2005) in 1996. These are the only Latina/o actors recognized for recurring roles in the 66 years since the first Emmy awards show in 1949. Keeping in mind that acting accolades are the result of not just performers’ abilities but also the creation of compelling characters and television narratives, what can we make of the relative absence of Latina/o actors in the television VIP club? In this essay, I ruminate on five of the primary reasons why Latina/os are still often left out.

1. First, in my assessment, Latina/o characters and storylines are still not taken seriously by many television creatives, executives, and advertisers. There is a dearth of Latina/o characters even in this New Golden Age of television, which has brought us such complex and unconventional series as Breaking Bad (2008-2013), Girls (2012+), and Transparent (2014+). This is not for lack of good intentions, however. As scholars such as Martha Menchaca have documented, the de facto segregation of cities in the Southwest in the last century has resulted in most Latina/o and non-Latina/o Americans living very separate lives.2 In Los Angeles, the hub of television production, upper-income white Angelenos typically know Latina/os as their nannies and gardeners, not as their neighbors, friends, or coworkers. Hollywood tradition also has trained American viewers (even Latina/o viewers) to expect narratives of white heroism, wit, and beauty, and of Latina/o comic relief and marginalization. This contributes to a tendency for many television professionals to consider Hispanic-driven narratives too culturally different to draw in American viewers, even as Latina/os constitute 17 percent of the potential viewing audience. Arguably, a series pitched today that includes a Latina/o hero or heroine won’t make the cut or will be green-lit with such a low budget that it will quickly fall flat. Vibrant, engrossing series such as Jane the Virgin, Hulu’s East Lost High (2013+), and NuvoTV’s reality series Los Jets (2014) are still exceptions to usual standards of practice. 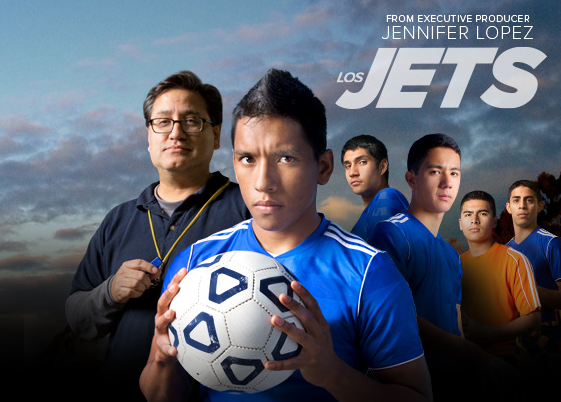 2. Another reason for the lack of award-worthy roles for Latina/os is a dearth of great writing for the few characters that do appear on network television. When characters and narratives are underwritten, stereotypical, or don’t give the actors that play them a chance to show their chops, why would we identify with and follow them? See in relation to reason #1 above: Funding with such a low budget that a series will quickly fall flat. It’s also useful to consider that Latina/o narratives have typically been relegated to the situation comedy genre, while the critically acclaimed series of the last decade have overwhelmingly been dramas and dramedies. Audiences, especially young adult viewers, clearly crave the greater complexity and nuanced characterizations possible with dramas.

3. Moreover, recent Latina/o roles arguably are often uninspired because of their genesis in series remakes rather than in original narratives. A number of Latina/o-focused series of the last decade, such as Ugly Betty, Jane the Virgin, and Devious Maids (2013+), have been remakes of popular telenovelas. These series’ lead characters thus are not the personal, original creations of their writers. For example, as much as I enjoy Jane the Virgin and Gina Rodriguez’s performance, I find the novela-inspired narrative and characters too predictable for my taste at times. The networks’ overreliance on novela remakes likely is related to confusion about what else Latina/o viewers will watch. While studies repeatedly document that over three-fourths of American Latina/os consume both English and Spanish-language entertainment media,3 U.S. television producers and advertisers still often appear unsure of how to appeal to them with original programming.

4. These last two reasons are related as well to the lack of Latina/os at the table when it comes to writing and producing television. It makes a difference that Jill Soloway, creator of Transparent, grew up with a transgender parent who came out to the family as trans late in her life. Similarly, Carlos Portugal and Kathleen Bedoya, the creators of East Los High, have been instrumental to crafting Latina/o teen characters that feel authentic even while the series works within the confines of the prime-time soap genre.

The cast of season 1 of East Los High at a benefit for the Hulu series in July 2013.

However, few Latina/os worked as television writers prior to the 1990s, and their numbers have barely grown since. The Columbia University study found that Latina/os comprised only 2 percent of writers, 1.1 percent of producers, and 4.1 percent of directors of television series from 2010 to 2013. They comprised none of the series showrunners.4 This scarcity arguably leads to depictions that fail to capture the diversity and richness of Latina/o experiences. Complicating this issue, Latina/o writers who get opportunities to create series may need more experience to first develop their craft. Without being hired for other writing positions in television, they have few opportunities to gain this experience.

5. Finally, fear of stereotyping arguably has also had a chilling effect. In response to media advocacy efforts, network executives appear apprehensive about presenting characters or stories that are strongly culturally marked or set in working class neighborhoods, for fear of portraying Latina/os in a manner deemed non-aspirational and of turning off viewers or advertisers. As a former student of mine who interned in a major network’s development department once told me, pilot scripts that posit a Latina/o or African American working-class protagonist will always get an automatic “pass” for this reason. While Latina/o characters with exaggerated characteristics such as broken English, heavy accents, and colorful costumes are less often seen in TV story worlds,5 less assimilated, working class, and darker skinned Latina/os also are rarely present. The range of roles and story possibilities has sadly diminished even while Latina/o televisual representation is seemingly more “positive” in recent years.

Gina Rodriguez’s Golden Globe win and the critical and popular success of Jane the Virgin are hopeful signs that Latina/os are in fact beginning to be taken seriously by networks and streaming television outlets. I think they point in particular to rising awareness of the grave need for networks to do so for their own survival. I believe it’s inevitable that as tomorrow’s television creators and stars, Latina/os will become welcome guests and hosts of the party. But the invites are nevertheless overdue.