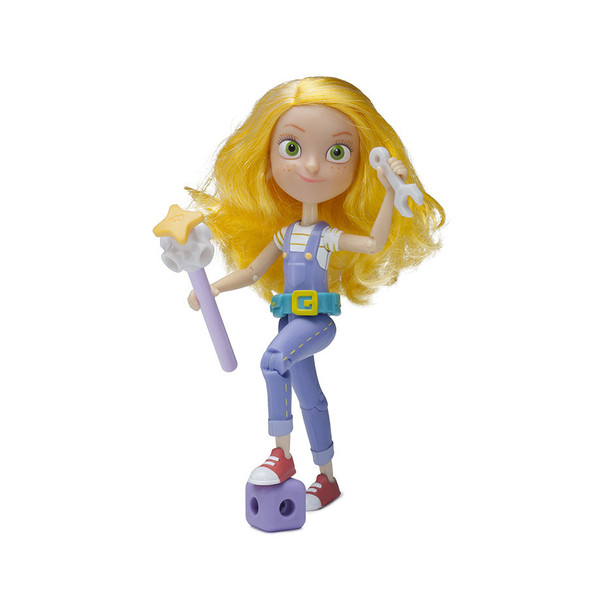 The GoldieBlox action figure.
Launched in opposition to the gender-defined play patterns favored by the toy industry, GoldieBlox construction toys have nevertheless embraced the logics of franchising, building a renewable brand out of its conflict with conformity. Its most recent product—an “action figure” directly juxtaposed to the “fashion doll” pushed on girls by toy marketers—exemplifies this position taking against accepted industry embrace of gender stereotypes. GoldieBlox seeks both brand differentiation and political legitimacy through this appeal to “action”; yet in doing so, it asks us to consider the complicated politics of the gender hierarchies underwritten by the action figure and the conflict-driven transmedia narratives supporting it.

The GoldieBlox company emerged in 2012 amid an ongoing dialogue about the limitations with which major toy marketers imagined the play of young girls. The LEGO Group had gained significant attention that year for trying to look beyond its core target of boys to more explicitly connect girls to the construction-based play long credited with preparing children for careers in design and engineering. This move was heavily critiqued by feminist voices like Anita Sarkeesian’s Feminist Frequency and activist organizations like SPARK that shared LEGO’s goal but found counterproductive its emphasis on baking, shopping, caregiving and other normative gender scripts (as termed by Mary Kearney and Ellen van Oost).1 With the “What it is is beautiful” girl of the 1980s becoming a social media meme, GoldieBlox entered the market as a would be savior who could turn back the clock on the scripts that ruled the current toy market and reconnect girls with the pleasures of engineering. Each product in the line, from “GoldieBlox and the Movie Machine” to “Goldie Blox and the Dunk Tank,” presented young builders with a box of spindles, ribbons, axles, and cranks.

Vowing to “disrupt the pink aisle” logic of the industry, GoldieBlox garnered significant public attention via Kickstarter, promotional videos on YouTube, public battles with The Beastie Boys over unauthorized use of their song “Girls” in one of these videos, and even Super Bowl advertisement. Some public commentators have also thrown cold water on this would-be feminist mission by decrying the persistent pink-and-purple (and white and blond) cuteness of the GoldieBlox character displayed on the packaging to provide a feminized narrative frame for use of the construction materials. Others have simply pointed out how the toys are not that fun and have limited engineering functionality. What interests me most, however, is the announcement earlier this month that the company would add an action figure to its construction toy line. Both this new product and the announcement itself depend on a narrative of “action” well worn in the toy industry to distinguish boys’ playthings from girls’.

The “GoldieBlox Zipline Action Figure” brings new focus to the GoldieBlox character. While existing products did feature small animal tokens in addition to engineering components, Goldie herself remained two-dimensional—a figure featured on packaging, instructions, and marketing materials (including downloadable apps). In this action figure, Goldie gets a plastic form of her own. The figure includes new building pieces compatible with old sets, intended to construct a zipline carriage to traverse Goldie across whatever chasm can support the 13-foot cord (indeed, this seems incredibly fun). As promoted by the company, however, the focal point of the product appears here https://grademiners.com/dissertation-help to be Goldie herself and her difference from other human avatars for children’s play. “For the first time ever, Goldie comes to life as an action figure!” the product page boasts. “More than just a doll, her articulated shoulders, hips, knees, and joints along with specially designed hands and feet are designed for action!” 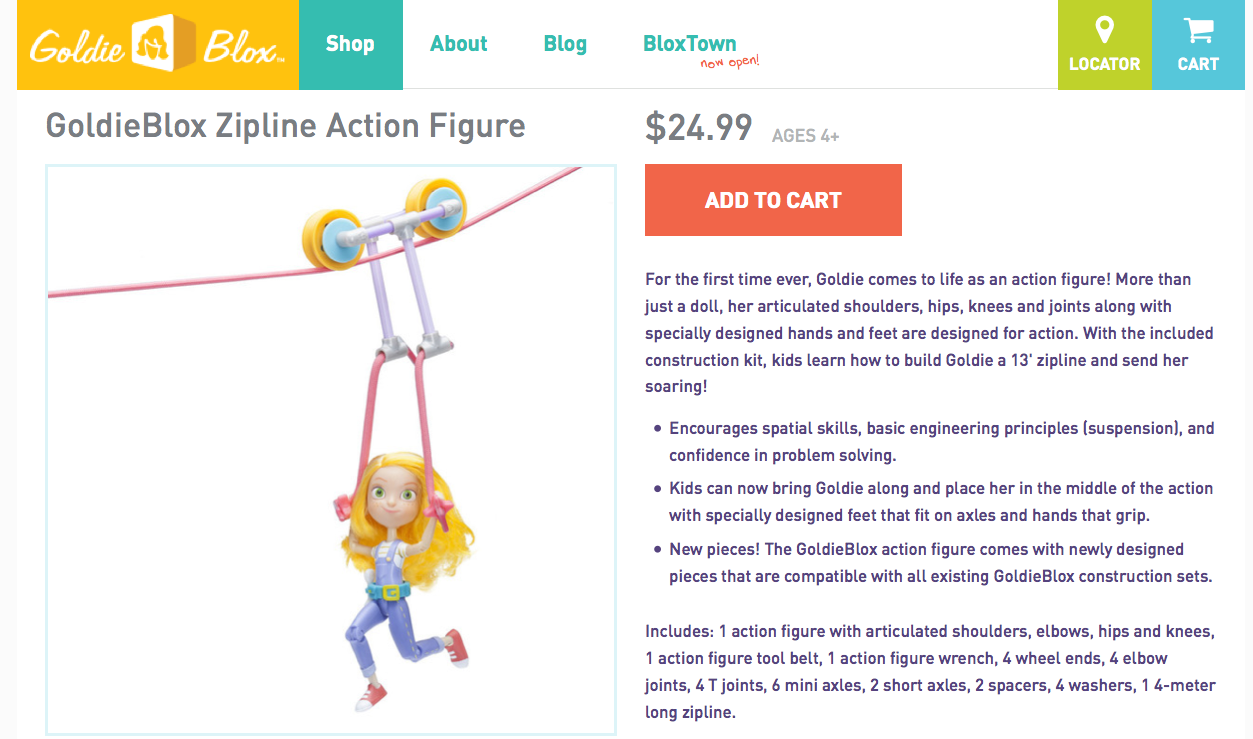 The website for the GoldieBlox Zipline Action Figure announces that “Goldie comes to life as an action figure!”
This “more than just a doll” discourse has long worked to distinguish boys’ and girls’ playthings and occlude similarities in play patterns across these differently constructed genders. Launching GI JOE in the 1960s, for example, toymaker Hasbro sought to port the razor blade principle behind Barbie (buy the doll, then the accessories) to boys’ toys. In material and economic form, early GI JOES were functionally equivalent to Barbie dolls—twelve inches of plastic covered in various cloth uniforms. Yet Hasbro insisted upon calling the toy an “action figure” to maintain gender boundaries and distinguish boys’ play from girls’. Reflecting on his immortalization in plastic form in licensed toys connected to Six Million Dollar Man, Lee Majors deployed the phrase “It’s not a doll, it’s an action figure” to similarly write my essay for me distinguish his product from something less valued. Sitcoms characters like Will on The Fresh Prince of Bel Air used the same language to reaffirm the value of their playthings by placing them in superior relation to another gendered term. The “It’s Not a Doll…” phrase was even used to legitimate a 2010 art show in Lauderhill, Florida. 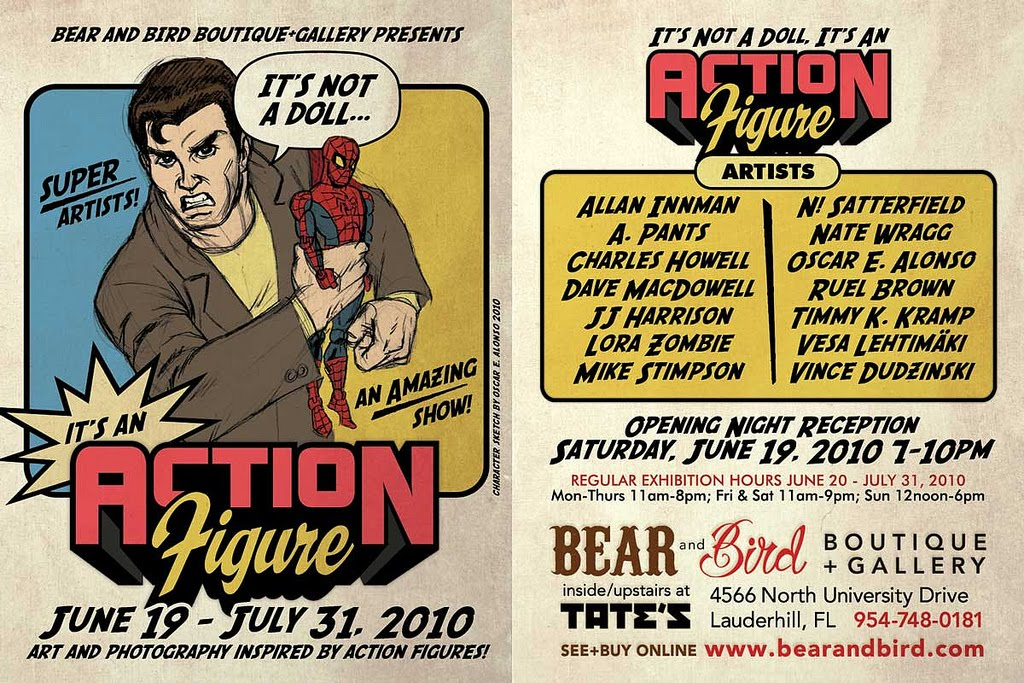 Advertisement for a 2010 art show in Lauderville, Florida.
The GoldieBlox action figure aims to redeploy this discourse. One could look at Goldie and see a “doll.” While she carries a wrench, she still has synthetic soft hair that could be read as doll-like (which after many trips down the zipline may require Goldie to borrow a brush from Barbie). My point is not that brushable hair defines dolls; the difference is not one purely of toy form or design but instead of discursive construction or research paper. More importantly, as used previously in the culture industries, that distinction has depended on the value of the masculine over the feminized realm of the doll. GoldieBlox seizes on the distinction of “action” to claim greater value for its product compared to the feminized doll, all the while trying to newly apply that typically masculinized term to the play of girls. 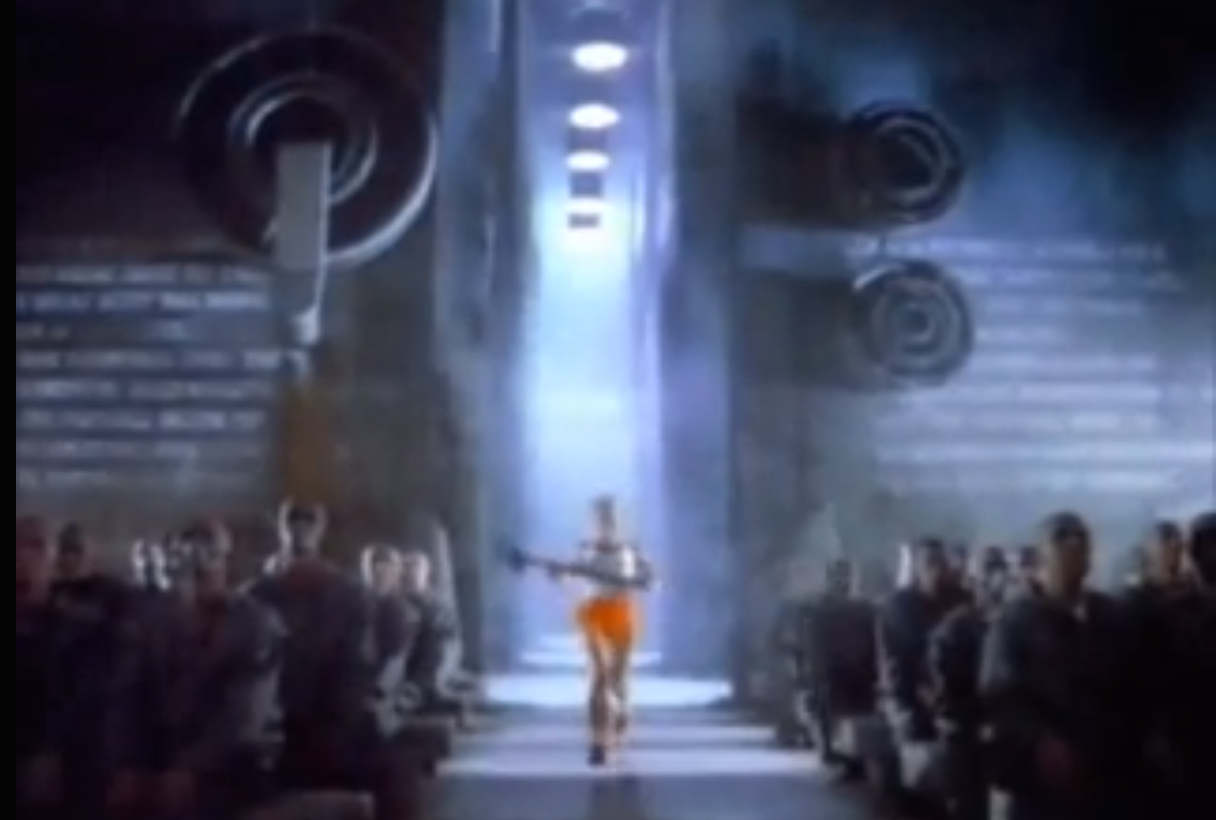 The rogue woman brings down Big Brother in the landmark “1984” Apple commercial.
This legitimization of production and politics through action coheres in the attention-grabbing promotional videos. Pitched as much if not more at parents and activists than girls themselves, the company’s videos take an overtly feminist, political stance. The video announcing the Goldie action figure, “GoldieBlox vs. the Big Sister Machine” opens with the onscreen text “Fashion dolls teach girls to value beauty over brains. One is sold every 3 seconds.” Evoking Apple’s famous “1984” ad, the video offers resistance to the totalitarian regime of beauty through more individualistic consumption. Much as the action figure itself gives Goldie more material form, the video features a live-action version of Goldie who throws her would-be wrench into the machinery of the factory in which Big Sister produces fashion dolls and transforms real girls into high-heeled automatons. Clad in toolbelt and red Converse sneakers, Goldie steps out of the assembly line, using her hammer to destroy the machinery, liberate the entranced girls, and literally “break the mold,” so the doll machine can produce her action figure.

Besides extending the industry’s longstanding investment in action as a marker of distinction from traditional girls’ toys, this video extends the principles of ongoing television/video narrative by which many action toys have been franchised It is easy to imagine Goldie’s action heroine, good-versus-evil battle against the sinister organization Big Sister in the same vein as the never-ending conflict of GI Joe versus Cobra or Inspector Gadget versus K.L.A.W. As developed out of partnerships between toymakers, comic book publishers, syndicated television producers, and others in the 1980s, these serialized good versus evil narratives helped to build brands that could be marketed across media platforms. As much as I think Big Sister could present an ongoing narrative threat to Goldie, I’m not entirely convinced that’s exactly what the future will hold (still, it’s fun to imagine villains to add to the action figure line: The Patriarch? Backlash? Scareotype?). Yet already in operation across GoldieBlox’s television commercial and online videos is the construction of a good-versus-evil industry narrative. GoldieBlox the character only now stands in for GoldieBlox the company and its heroic struggle against established industry interests and beliefs—a struggle validated through the discourse of “action.”

Action is important. Activism, whether possible through the creation of new consumer products or not, requires it. Yet the GoldieBlox franchise, GoldieBlox company, and GoldieBlox character ask us to think about the degree to which culture industries have already defined the terms of “action” and articulated them to the gender distinctions upon which they construct markets. It’s definitely possible for GoldieBlox to deconstruct and recuperate the cultural and industrial privilege accorded “action” without buying into the gender hierarchies it has underwritten thus far; but I remain worried that in seizing onto terms of action long valued in articulation to boys without interrogating those values, GoldieBlox contributes to the continued devaluation of dolls on the basis of them being “for girls.” What instead would be the comparative politics of an “action doll”? Perhaps that would be the worst of all worlds. But I wonder nevertheless whether the action figure as imagined by the culture industries so far is up to the task of supporting more gender-inclusive imagination of play. I hope that subsequent attempts within the industry to improve these possibilities (by GoldieBlox or otherwise) will spend more time thinking not just about the politics of the doll, but also the relatively less explored politics of the action figure.

1. The GoldieBlox action figure.
2. The website for the GoldieBlox Zipline Action Figure announces that “Goldie comes to life as an action figure!”
3. Advertisement for a 2010 art show in Lauderville, Florida.
4. The rogue woman brings down Big Brother in the landmark “1984” Apple commercial.