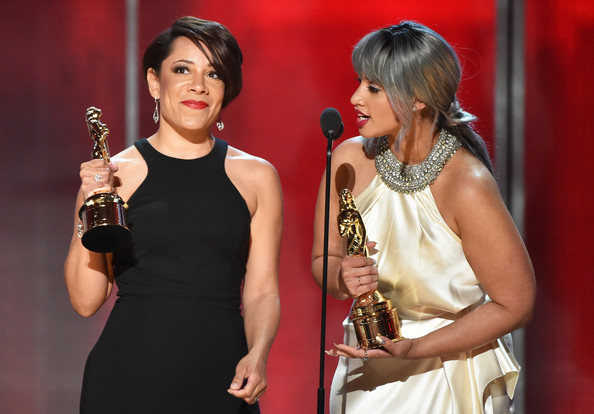 Dascha Polanco, who plays Dayanara Diaz on the series Orange is the New Black (Netflix, 2013- ), is quoted in press material announcing its award for Special Achievement in Television by the 2014 ALMA (American Latino Media) Awards: “The diversity that we represent [on the series] is becoming the face of America. The show is very real and focuses on real issues.” She continues more somberly, “The fact that it is such a big deal that there are six Latinas on a hit show is an indication that there is more work to do.”1

The unbridled optimism of the first part of Polanco’s quote is an apt illustration of the usual tone of the awards show, which celebrated its “Quinces,” turning 15 with its October 15 broadcast on msnbc. In addition to Orange is the New Black, this year’s show recognized the film Cesar Chavez, rapper Pitbull, and Mexican film director Guillermo del Toro for their contributions presenting or promoting progressive Latina and Latino images. Sponsored by the National Council of La Raza, the largest U.S. Latino advocacy organization, the show is similar to the NAACP’s annual Image Awards in celebrating actors, directors, and other notable media professionals, as well as films and television series that have enhanced Latina/o American representation in the prior year.

I’ve always had a soft spot for the ALMA Awards, since my late mother and I got to attend the show in 1998. Decked out in hastily purchased but still-elegant evening gowns for the occasion, we basked at the Pasadena Civic Auditorium in the close proximity of the likes of Constance Marie, Edward James Olmos, Rita Moreno, and then up-and-comer Jennifer Lopez and caught unforgettable performances by Celia Cruz and Lalo Guerrero. But as I’ll elaborate on below, I think it and similar awards shows have limitations as forums for promoting greater and more meaningful inclusion of Latina/os or other marginalized groups in film and television. 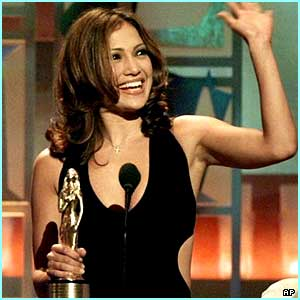 Jennifer Lopez receiving the 1998 Alma Award for her role in Selena.

On the plus side are the shows themselves. In the case of the ALMAs, it’s a festive celebration of Latina/o achievements, a party for the hard-working members of Latinowood that have pulled them off, and an entertaining treat all of us who get to eavesdrop on the event through the broadcast. As a slickly produced media event (co-host Eva Longoria underwent an impressive ten wardrobe changes during this year’s show), it’s accessible to viewers of all ages and ethnic backgrounds. Clearly, it aims to raise awareness of issues of Latina/o marginalization in the media and to do so in an upbeat, entertaining manner. This is no small thing. But what gets lost if such events are the only method of Latina/o media advocates hoping to improve the “quantity and quality of representation that Hispanic Americans receive in the mass media”?2 I would argue that an oversimplification of the politics of Latina/o representation can be the unintended downside.

First, awards shows, in their emphasis solely on a handful of successful projects, actors, and media producers, neglect to educate viewers about the more complex dynamics of the typical exclusion of Latina/os and Latina/o communities from most film and television narratives (and therefore from the American imaginary) and of Latina/o representation that still excludes many Latina/os—those too brown, too poor, too Spanish-speaking—while making stars of a select few. While the NCLR has honored actors, films, and television shows that highlight the diversity of American Latina/os, with Orange is the New Black and Cesar Chavez useful illustrations, the performers recognized on Latina/o media awards shows such as the ALMAs too often reinforce Hollywood paradigms of ethnicity and casting that have dictated the casting of fair-skinned or comfortably bronzed and fully assimilated Latina/os almost exclusively over the decades.

Second, shows such as the ALMAs can give the false impression that there is no more work to be done, that Latina/os have gained employment and status at all levels of decision making in film and television production, and that we can now just sit back and enjoy the fruits of this progress. Sadly, that scenario is far from reality today. As researchers at Columbia University found in a 2013 study, Latina/os are still dramatically underrepresented as lead actors in television series and films (none were found in 2013 prime-time series or in the top ten films of the year) and as media professionals, despite making up 17% of the American population.3 From 2010 to 2013, Latina/os comprised 2.8% of television directors, 0.4% of television producers, and 1.7% of television writers. In film, they were 2.3% of working directors, 2.3% of producers, and 6% of writers. Among the top 53 radio, television, and film executives in the media industries, only one (of 1.88%) was Latina.4

While there clearly is a dire need for it, Latina/o media activism and other advocacy for underrepresented groups is no easy task, particularly in this era in which many Americans think we’ve graduated to a post-racial and post-feminist media culture and no longer need to fight for egalitarian representation and in which media advocacy organizations operate on shoestring budgets. Scholars of ethnic media advocacy such as Kathryn Montgomery, Chon Noriega, the TeleVisions Project team (led by John Downing and published as Mary Beltrán, Jane Chi-Hyun Park, Henry Puente, Sharon Ross and John Downing), and Scott Wible have also noted the challenge that media advocates face with respect to keeping their mission interesting and timely to the news media and public.5 Wible noted in a study centered on advocacy encouraging viewership of the Showtime series Resurrection Blvd. (2000-2002) that Latina/o media advocacy has had to evolve in the last decades based on FCC and market shifts; media advocates are now expected to approach viewers as “consumer-citizens” who enact progressive change through their remote controls and their pocketbooks as opposed to through former tactics of sit ins, boycotts, and protests targeting studios and networks.6 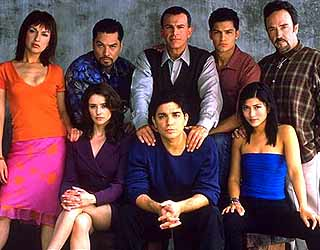 With this in mind, awards shows and annual “report cards” given to each major network regarding their employment and representation of specific groups are some of the primary tools used in recent years by ethnic media advocates such as the National Hispanic Media Council, which spearheads Latina/o efforts targeting the television industry. Notably, both of these strategies can become limited through rewarding “positive” but at times unsubstantial progress, such as in the casting of recent TV roles with actors and actresses of Latina/o and partial Latina/o descent paired with characterizations and storylines that included very little or no acknowledgment of Latina/o cultural identities or communities.

Finally, these awards shows also can reinforce the misleading dichotomy of “positive” and “negative” images, sidestepping more complicated but potentially enriching discussions of meaningful inclusion, narrative importance, and the ways in which Latina/o culture and communities are valued or not within Hollywood narratives and thus within the American imagination. And who gets to decide? Ultimately, notions of positive and negative are subjective to each of us. Too often, these notions also get simplistically paired with ideas about class, in relation to promoting the myth that poor characters are always negative stereotypes and that conversely, “positive” images always present a group aspirationally with respect to profession and income. The one-dimensional Latina lawyer with no connection to her cultural heritage then might be viewed as a more desirable image than a working class Latina maid with dignity and intelligence who takes pride in her identity as Latina and who is connected to and fights for her Latina/o community. I don’t think the NCLR has fallen into this trap this year, with its recognition of a series about women in prison and a film celebrating the leader of the Chicano farm workers’ movement. But it’s an issue to be aware of when awards shows aim to decide on the most “positive” images and narratives of the prior year.

I’m still drawn into the pomp and exuberance of the ALMA Awards and the stars who participate in and are recognized by them, but I believe the awards should be paired with efforts to introduce these more complex issues to audiences as well.

1. Selenis Leyva and Dascha Polanco accepting the ALMA Award for Special Achievement in Television for Orange is the New Black
2. Jennifer Lopez receiving the 1998 Alma Award for her role in Selena
3. The cast of Resurrection Blvd., which aired on Showtime from 2000-2002.