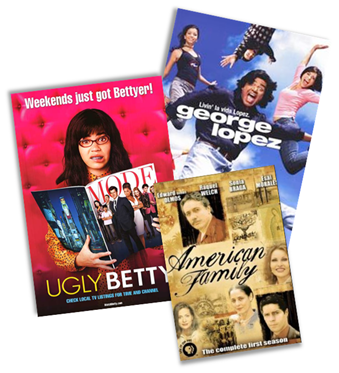 With some degree of success, Latino/a-oriented shows in English language television networks have courted Latina/o media consumers by offering narratives that attempt to portray their U.S.-based experiences, particularly those who belong to second-plus immigrant generations (for discussion, see Piñon & Rojas, 2011).1 Most primetime English-language Latina/o-oriented programming (ELLTP) – for instance, The George Lopez Show (ABC, 2002-2007), American Family (PBS, 2002), or Mind of Mencia (Comedy Central, 2005-2008) to name a few – appeared after the 2000 U.S. Census when it named Latina/os the largest ethnic minority. Despite Latina/os’ visibility across various TV formats, not all ELLTP enjoyed an equal level of success in their quest to tap into Latina/os’ $1.2 trillion dollar estimated purchasing power as some faced termination after one aired season (or a few broadcasted episodes) similar to previous ELLTP in the early 1990s – FOX’s Culture Clash (1993) and House of Braggin’ (1994-1995) as examples. Such general reception not only merits viewership or show consumption scrutiny, but also the type of images ELLTPs seem to disseminate about Latina/os among ingroup ethnic audiences, which only a paucity of information exists. Utilizing survey methodology, this article is interested in intraethnic differences in viewership and prototypicality assessments among Latina/os who had some previous exposure to ELLTP.

Media reports suggest discrepancies among Latina/os, particularly in regards to nativity status. Foreign-born Latina/os are more likely to favor Spanish-language television, whereas U.S.-born (or second-plus immigrant generations) tend to consume more English-language television (DeSipio, 20032; Rincón & Associates, 2004).3 Similar findings were attained by Moran (2011) in her interviews about media engagement among Latino families living in the San Diego-Tijuana border.4 But media consumption of a particular language, as the literature discusses, is more complex than simply nativity status with cultural maintenance (for example, being reminded of home or language acquisition) and language spoken at home influencing programming choices as well (DeSipio, 2003; Ríos & Gaines, 1998).5 When it comes to ELLTP, a media report by Rincón and Associates (2004) suggested that U.S.-born Latina/os and those who resided in Texas had higher viewership of The George Lopez Show compared to foreign-born Latina/os or those who resided in Hispanic television markets outside Texas. Nativity status, however, did not seem to matter in the consumption of American Family.

With Latina/o characters as main agents in ELLTP narratives, Latina/o characters acquire a sense of multidimensionality, thus opening discussions of whether Latina/o images act as counter-stereotypes. One aspect that must be noted is Latina/os’ placement in white collar jobs as opposed to typical subservient roles such as the help (e.g., gardeners or maids). Even though a middle-class status appears to equate Latina/o characters to the portrayals of mainstream (white) characters, some clichéd and historical attributes still permeate in ELLTP. This is especially evident when Latina/os’ are framed as criminally deviant – for instance, the Cuban-American family in CBS’s Cane (2007) whose financial success was connected to unlawful activities, possessing unflattering English accents, or an excessive sexuality, which in turn, Otherizes them as non-normative and a treat to the American way (see Ramírez-Berg, 2002).6

Research Questions
Eventually, available media reports propose that Latina/os in Texan media markets are among the highest consumers of ELLTP (Rincón & Associates, 2004), with foreign-born or U.S.-born Latina/os showcasing dissimilar media patterns (DeSipio, 2003; Moran, 2011). However, questions remain pertaining to gender, Latino ancestry, and bordertown residence – key demographics that may illustrate intragroup differences given ELLTP’s potential gender focus or ethno-cultural specificity and the availability of certain Latina/o programming exclusively to some geographic regions. Of interest is ELLTP consumption and prototypicality perceptions among young Latina/o millennials – the target viewer of Latino-oriented media (Piñon & Rojas, 2011). With little direction as to the state of intraethnic differences, we formulate research questions instead of hypotheses.

Methodology
Young Latina/o millennials (ages 18-34) were recruited via a Facebook snowball sample to answer an online survey. Because not enough responses were received as postulated by other studies that employed Facebook sampling methods (Baltar & Brunet, 2012),7 a complimentary paper survey was also administered to a convenience sample of Latina/o students from a Southwest Texas university. The survey took an average of 15 minutes to complete with no monetary incentive during February and March 2012. Combined, the study received 643 responses (496 online, 147 offline), but after data cleaning, only 426 responses were deemed appropriate to represent ELLTP Latina/o viewers who resided in Texas. Table 1 describes the current Latina/o sample, which were chiefly women, of second-plus immigrant generations, had some college education, and resided outside bordertowns. 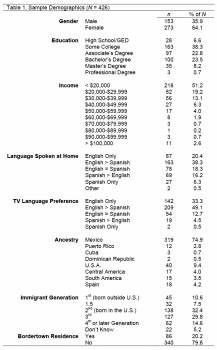 The purpose of this study was to compare ELLTP viewership and prototypicality perceptions among ingroup Latina/o viewers who resided in Texas. Findings suggest that there is little to no intragroup variation in either ELLTP viewership and prototypicality assessments, except for gender and geographic discrepancies in the consumption of particular ELLTP. However, overall ELLTP viewership remained considerably low in which Latina/o viewers oftentimes reported watching shows not very often with The George Lopez Show (TGLS), Ugly Betty, and Mind of Mencia being notable exclusions. Prototypicality perceptions, on the other hand, were equally moderate despite demographic fragmentation suggesting that ELLTP contain a reasonable amount of both criminal-related and favorable imagery. Understanding study findings in terms of the current sample and the type of narratives in ELLTP can help explain the results.

Whereas Rincón and Associates (2004) utilized a more representative and national sample of Latina/o media consumers, the current sample was highly homogenous (that is, being U.S.-born, educated, highly exposed to English-language TV, and young) and resided in one state with a high population of Latina/os of Mexican descent. Such contrast in samples thus limits the type of comparisons among studies. But sampled Latina/os had higher consumption patterns of TGLS than any other ELLTP like participants in the media report by Rincón and Associates. The dense uniformity in the current sample consequently proposes similar perceptions and reactions to either ELLTP consumption or prototypicality reception.

Why the gender and geographic intraethnic discrepancies? Regarding gender differences, one tentative explanation lies in the enjoyment of ELLTP narratives and who stars in them. Latino men tended to watch male-centered ELLTP such as Cane and Freddie, while Latinas watched more of Ugly Betty – a Latina-star show – and TGLS where Angie Lopez (George’s wife) receives a pronounced role in the narrative as an audacious mother and wife. Seeing the presence of ingroup members in ELLTP narratives – both in gender and ethnicity – may have swayed viewership among the current sample. Geographic intraethnic differences, on the other hand, could be explained by the availability and presence of Mexican programming in the area. Moran (2011) notes that because of the proximity to Mexico, bordertown residents enjoy a greater breath of Latino programming that is often perceived less ethnocentric and of higher quality than US programming. While ABC broadcasted Ugly Betty, Televisa – the highest watched open-network in Mexico, which bordertown residents have access to – transmitted the Mexican adaptation (La Fea Más Bella) of the original Colombian soap opera (Yo Soy Betty, La Fea). There exists the possibility that TX bordertown residents could have enjoyed and preferred the Mexican adaptation, but because the survey did not measure viewership of Mexican programming, this interpretation is simply a speculation.

What about prototypicality perceptions? Proponents of Constructivist Theory suggest that audiences decode media images and messages differently (see Rivadeneyra, 2006),9 but this was not the case in this study considering different intragroup demographics. Although results could be due to unequal and small sample sizes, we have to also be reminded of the homogeneity of current ELLTP viewers who appear to have similar experiences as U.S.-born Latina/os, thus decoding Latino-oriented shows congruently. This analogous reception, however, does not negate their perceptions that ELLTP both offers clichéd and favorable ingroup imagery.

The present findings also bring forth other questions, which future research should address. Why the higher exposure of TGLS over other ELLTP? How different are Latina/os’ ELLTP perceptions compared to US states with highly density of Latina/os? What shows are perceived by Latina/os as the closest to the U.S.-based experiences of second-plus immigrant generations? What sort of cultural maintenance does ELLTP gratify?