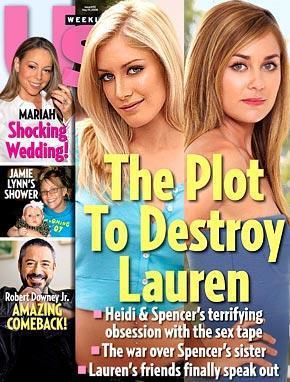 During the summer of 2007, between the second and third seasons of The Hills, a scandalous rumor spreads in the celebrity media. Lauren Conrad and Heidi Montag have been best friends, but when Heidi starts dating Spencer Pratt he predictably comes between them. The most believable reality is that Spencer, seeing a ticket to money and fame in his penchant for instigating conflict, feeds gossip outlets the lie that Lauren and her boyfriend Jason have a sex tape. When the cable television thread of the narrative picks up, Lauren confronts Heidi, who might even be innocent of these shenanigans: “You know what you did!”

There was no Lauren Conrad sex tape, but the very idea posed a grievous harm. And The Hills assumed that its viewers knew all about the summer’s true-life drama; Us had just splashed the characters on its cover along with the headline “THE PLOT TO DESTROY LAUREN.” Such drama relies, in the first place, on an understanding of celebrity sex tapes, what they are and what they mean. The audience for celebrity gossip can fill in for itself what one might look like. This imagined object is invested with volatile notions of propriety, privacy, and sexualized gender identity.

Intensifies: the celebrity sex tape offers intimate access to the personal life of the famous person, seemingly overcoming the filtering of publicity in ways similar to paparazzi photos, Instagram, and Twitter. Like much celebrity media now, the sex tape signals a loss of remoteness of public personages. In place of the mystique of privacy with calculated access through artifices of publicity, now we are offered the mystique of transparency and intimacy. Not only are stars just like us; they’re available to us in ordinary moments, the bread and butter of docusoaps. That the sex tape is generally represented as a forbidden entree into celebrity life makes it all the more fascinating as an inside view. When you watch a naked Paris Hilton grasping her boyfriend’s penis, you cannot help but marvel at the fact that this exists and you can look at it whenever you like. It’s reality TV without commercial constraints and contrivances. 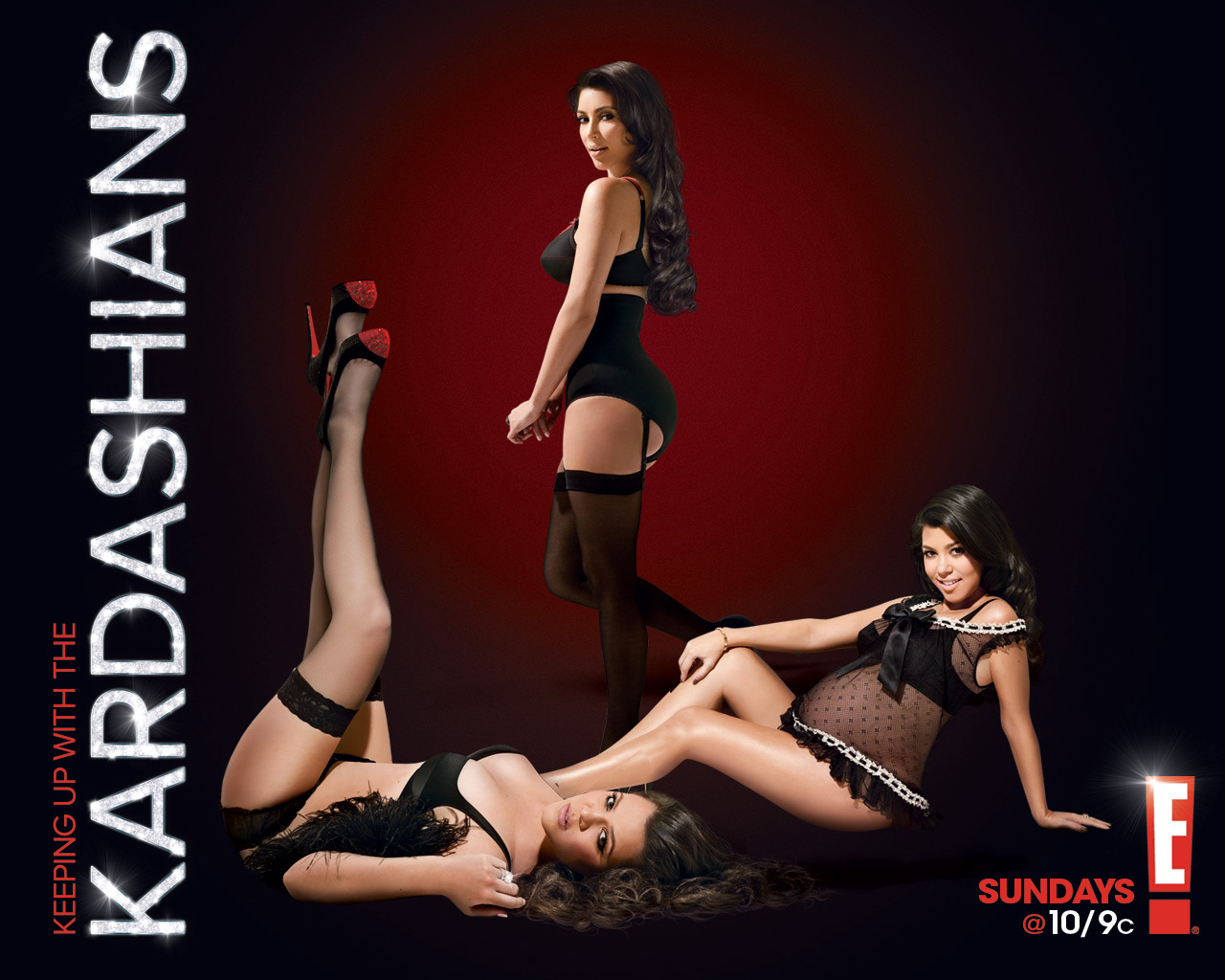 A 2009 E! Promo for Keeping Up With the Kardashians

And defies: unlike the typical celebrity media of supermarket tabloids and sites like I’m Not Obsessed, the sex tape is aimed at straight men (though not exclusively). Along with lad mags like Maxim and babe blogs like Egotastic!, the circulation of videos of celebrities having sex represents a flipside of the usual focus of celebrity culture on the ideology of unattainable female beauty and the fantasy of a glamorous good life. The straight male celeb consumer — and despite gender proscription, straight men are consumers — is a voyeur taking sexual pleasure in looking. This dudely consumption promotes an aroused connoisseurship of bodies, bangin’ bods, simultaneous with a contempt for female agency or intellect. As in the cliché about effective casting of female parts: women want to be her, men want to fuck her. Now you see it, not a simulation or suggestion, not foreplay, careful angles, obscured breasts and genitals, polite cutting away. And unlike most celebrity culture, sex tapes are also marketed as straight porn. 1 Night in Paris was the bestselling adult DVD of 2005. However exploitative, that movie helped Paris Hilton establish her brand as a celebrity well known by a wider audience than many others.

The rise of sex tapes represents one kind of broadening of celebrity culture’s audience. It also stands as an example of the mainstreaming of a highly sexualized media culture at the meeting point of pornography and reality television. Some of the biggest sex tapes have starred women who maximize the intertextual appeal of reality TV and tabloids: particularly Paris Hilton (The Simple Life) and Kim Kardashian (Keeping Up with the Kardashians). These are women walking a thin line between glitzy Hollywood and trashy Vegas, quintessentially “famous for being famous.” But this insult never quite fits, as their fame comes from being hot and rich and connected — from being “celebutantes.” At least Pamela Anderson, one template for babe celebs, had a showbiz career before unintentionally becoming a porn star. The sex tape celebutantes are essentially bodies for sale, and are generally thought to be vapid — at least as star personae. That they have leveraged their bodies into good brands speaks not only of entrepreneurial savvy, but also of postfeminist culture that makes possible a media enterprise in which women sell their own sexualized image and identity to both female and male consumers. They maximize publicity not just in the sense of publicizing themselves, but of making public what is ordinarily private.

A sex tape made public by a woman’s ex-boyfriend violates her privacy. Ethically it appears to be black and white, and we take Paris and Kim at their word that this attention is humiliating. But at the same time, they might gain in esteem from being poised victims of betrayal, and also gain brand awareness. They make a show of consternation and regret, but have also been boosted into new levels of recognition. If their public identities are fashioned as bodies men want to get with, their images can be bolstered by representations of what it’s like. In the modern configuration of celebrity, women are selling porny images of themselves quite eagerly. The differences between erotic pictures in mainstream media, like David LaChapelle’s 2000 Vanity Fair photo of Paris Hilton, and explicit sex tapes might be a matter of degree.2 What sex tapes want in polish and modesty they make up for in authenticity, and celebrities are selling that all the time. 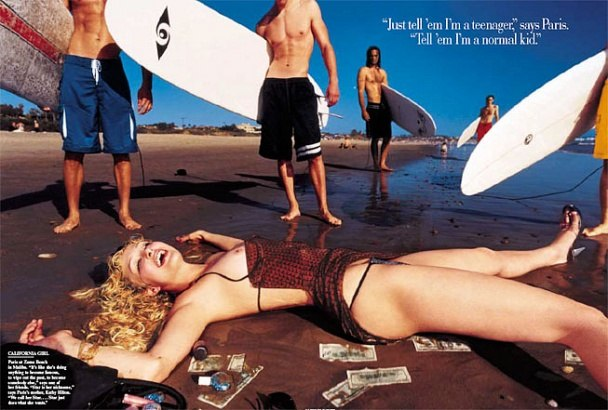 The negotiation of positive and negative values is more productively ambiguous with Kim Kardashian. In s1e1 of Keeping Up with the Kardashians (2007), Kim and her family talk about the need to respond to questions about the sex tape when Kim goes on Tyra in her first major media appearance. At first mention, the Kardashians speak in sober tones of regret. Kim is loathe to answer the questions, and her mom Kris conveys anger and frustration. But Kim and her sisters also joke about it. She says she made it “because I was horny and I felt like it,” and they giggle. Making a video recording of sex is hard to represent as a moral failure. Keeping Up exploits the notoriety that the sex tape brings its characters, and assumes the audience’s familiarity in ways quite similar to The Hills. While Kim performs her regret, she also works the advantage presented by any kind of fame. The sexualized celebrity of Kim Kardashian, the “princess” of her family, is at the heart of this series from the start.