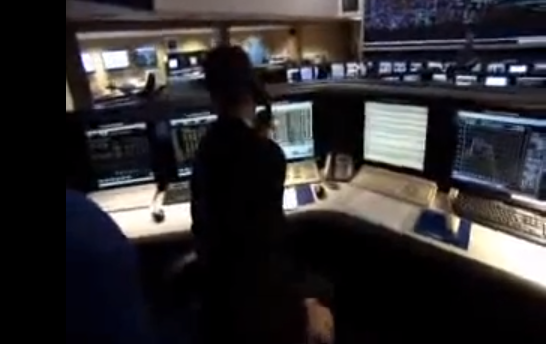 Every keyboard button you push, every screen you view, every ringtone you hear requires electrical energy.1 If you are reading on a computer, e-reader, or smart phone right now, consider how these words arrived before your eyes, how packets of data hopped through network nodes to become digitally rendered pages for your perusal. Data, whether text, image or sound, moves so rapidly and transparently that we rarely pause to think about the energizing of networks or media. Building on work in environmental media studies2, this essay offers a brief discussion of three energy-media vignettes involving water, lithium, and the sun. The goal of this discussion is to encourage further critical and phenomenological thinking about the interdependencies of natural and cultural resources, the layering and coordination of networked infrastructures3, and the subjectivities formed in their interstices.

The first scenario involves television, tea, and hydroelectricity in the UK, as conveyed in a short video entitled, “How the national grid responds to demand.”4 The video features a UK national balancing engineer perched at a computer interface with a map of the national energy grid. He is in the midst of managing what is known as a “TV pickup” – a surge in demand for electricity when the credits of popular TV dramas (such as the Eastenders) begin to roll. Within a period of about five minutes an estimated 1.5 million people simultaneously turn on their electric kettles to make tea. To manage the situation, the engineer quickly scans map of the national grid, analyzes power availability, and then draws extra load from two remote hydroelectric power plants to respond to the demand. Once he brings the hydroelectric plants online, thousands of tons of water rush down hills, generating huge torrents of power so that there will be enough electricity for citizens to sip a cup of post-TV tea. 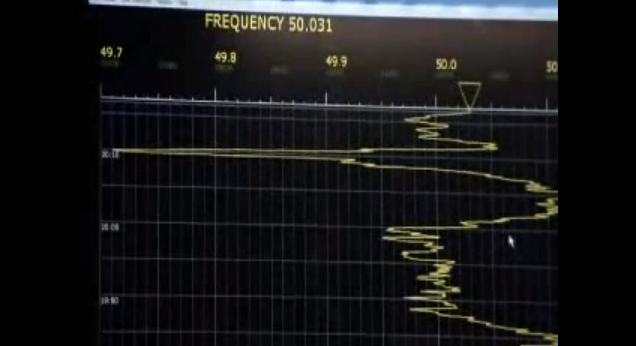 This situation reveals the intricate layering and coordination of networked infrastructures as well as the significance of water resources. As television networks air programming they also set schedules for fluctuations in the water supply and power grid. The end of a program in one network creates a phase of increased demand in another. Not only is water pumped through plumbing systems to fill kettles, the heating of this water is fueled by the gushing of water through dams at hydroelectric plants. Here, water sustains the nation’s electrical, television, and social networks. Though the video describes this situation as unique to the UK, when television’s popularity surged in the US during the 1950s, similar pressures on water systems emerged. Civil engineers reported increased demand upon water and sewer systems during commercial breaks when viewers simultaneously visited the loo and flushed their toilets en masse. Given such scenarios, media consumerism should be thought about not only as viewing what appears on screen, but also as the consumption of resources needed to capacitate that screen and the life worlds that take shape in relation to it.

While water resources energize television and tea drinking in the UK, Lithium-ion batteries fuel the network connectivity of billions of people worldwide using portable electronic devices, as well as growing numbers of electric cars. But where does lithium come from? The world’s largest lithium reserves are in Bolivia, Chile, and Argentina, and deposits have been recently found in Mexico as well.5 Bolivians have described their country as “the Saudi Arabia of lithium” yet, because of histories of exploitation by foreign developers, have taken a protectionist stance as a veritable “lithium boom” unfolds in the region. In recent years, US and Chinese firms such as LG Chem and BYD have maneuvered to tap lithium reserves, recently described as “one of the planet’s most strategic commodities.”6 7

Once lithium is extracted it is transported to companies in East Asia where assembly line workers use it to make batteries inserted in mobile devices, which must be regularly recharged. Mobile connectivity thus draws not only on lithium reserves but also on power grids around the world sourced by a patchwork of fossil fuels, solar, wind, nuclear and hydro-power, as well as human labor. If, as Tiziana Terranova suggests, the Internet is sustained by the “immaterial labor” of its users, then mobile connectivity is also supported by the time, attention, and capital required for battery recharging.8 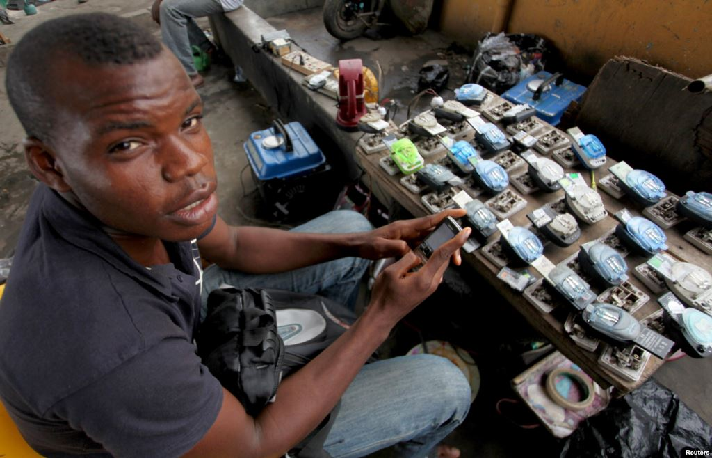 While recharging devices is relatively easy for those who are already highly mobile, it can be a daily challenge for the disenfranchised. Sites in airports once hosting public payphones have been made over as “free” charging stations for business class elites, yet mobile device users in the developing world often lack electrical access and must pay fees to charge their devices at a public market or Internet café, or poach from a friend’s, family member’s or employer’s grid access. Mobile connectivity requires lithium and human resources and is interwoven with differential access to electrical and social power.

As water and lithium resources fuel network infrastructures and media cultures, so too does solar energy. In recent years, massive solar harvesting facilities have sprouted up in sun-soaked places ranging from Abu Dhabi to Arizona, channeling energy into national or regional power grids. The Shams 1 facility just outside of Abu Dhabi is one of the largest concentrated solar power plants in the world. Its 2.5 square kilometer array of parabolic mirrors has a 100-megawatt capacity, enough to power 20,000 houses. 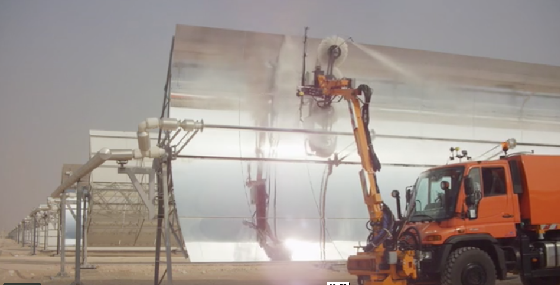 A short video celebrating the Shams 1 plant’s inauguration applauds the United Arab Emirate’s commitment to renewable energy and sustaining its citizens’ high quality of life, features a cameo of Sheikh Khalifa Bin Zayed Al Nahyan who supported the project. The image-track opens with multiple shots of the cutting edge architecture of Abu Dhabi’s modern skyline and transitions to sci-fi looking scenes of the Shams 1 solar plant in the desert where uniformed technicians inspect equipment and giant orange trucks crawl through the site with their automated arms extended to buff the shiny mirrors. Two young children, presumably next generation energy consumers, then appear, and after walking through the facility, the boy and girl venture into the desert as the sun beams on the sands around them. They arrive atop a massive sand dune and the boy uses a small mirror to reflect sunlight to those at the plant. Suddenly, images of engineers in action are rapidly intercut with computer interfaces, a switch is flipped, and an aerial view spotlights the mirrors rotating in unison, signaling the solar plant going online for the first time. In the final frame the words, “reflecting the nation’s commitment” flash on screen followed by the Shams Power company logo.9 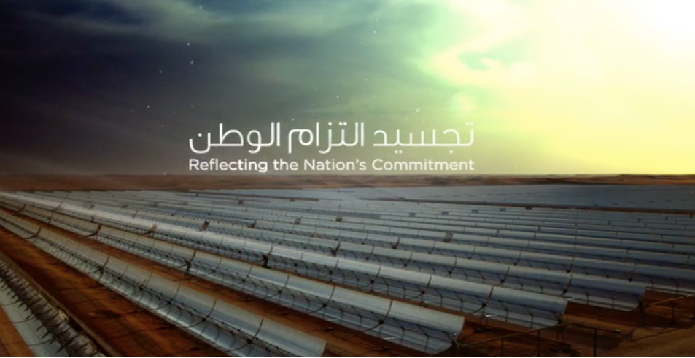 While this video promotes the national dream of terraforming the earth’s surface into fields of solar and economic power, other solar configurations are less audacious. For decades small-scale solar systems have powered facilities and consumer electronics in off-the-grid rural communities. In places from Zambia to Mongolia the sun has fueled local Internet access, computer and mobile phone use, satellite TV reception, and radio listening, linking remote locales to a scattering of networks.10 Just as lithium-ion batteries catalyze cultures of device charging, solar power generates local cultures of panel installation, tinkering, and repair, and intensifies interest in weather patterns.

Whether imagined as a system of national renewable energy or rural empowerment, the physical properties of solar power systems have the potential to cultivate an insular self-sufficiency at the very moment of (and perhaps as a response to) intensifying interdependencies and flows known as globalization. Rather than turn inward, it is vital that citizen-consumers seek relational and site-specific understandings of network infrastructures, energy sources, and global/national/local cultures so that they can participate in debates and decisions about resource futures.

By adopting a materialist approach to the study of networks and analyzing the resource requirements of television viewing, mobile connectivity, and Internet access, it might be possible to evade interpellation as transfixed button pushers, and support a project of infrastructure re-socialization, treating each moment at a network interface as an opportunity to investigate that which undergirds it, whether the geopolitics of extraction, emergent forms of labor, infrastructural designs and literacies, regulatory frameworks, temporal dynamics, or systems of differentiation and distinction. In the end, understanding the networks of the digital age involves more than tweeting, texting, or liking; it also requires learning how to recognize, sustain, and reconfigure the complex materialisms that undergird media cultures.11