Showtime’s new series, Masters of Sex, offers a fictionalized account of the lives and work of sex researchers Bill Masters and Virginia Johnson. Beginning in the late 1950s, when psychoanalysis still dominated study of sex, Masters and Johnson revolutionized the field with their focus on quantifiable data derived from physiological observations.

Part of the appeal of programs like Masters of Sex is nostalgia. Nostalgia television, whether in the form of TV re-runs Lynn Spiegel has discussed or in this newly produced version of the 50s, offers a particular irony: viewers can celebrate the progress of the present by positioning it against an unjust past.1 We especially seem to enjoy imagining ourselves as sexually liberated and knowledgeable, a fantasy that likewise often needs to be contrasted with a supposedly sexually repressed past.2 What’s at stake in the way the show celebrates and promotes sexual knowledge and scientific inquiry about sex? What are the implications of locating this in the past?

Perhaps one of the key pleasures of the show is not the sex it depicts but the particular way it gives us permission to gain knowledge about sex. By depicting Bill and Virginia’s breathless late 1950s discoveries, we get the pleasure of reveling in our distance from this era of ignorance in the progressive present. But at the same time, the show seems to know that we actually still need painstakingly detailed lessons on human sexuality. For example, in episode 6, Bill and Virginia work on busting the Freudian myth that a vaginal orgasm is superior, distinct, and more mature than a clitoral orgasm. At mid-century, most gynecologists and psychoanalysts understood frigidity as the absence of a vaginal orgasm during coitus, and typically estimated that 75-90 percent of women suffered from this supposed dysfunction.3 The root of this apparently pathological problem was often thought to lie in the woman’s improper adherence to norms of gender and femininity.4

In the show and in their research, Masters and Johnson were skeptical of the common sense assumptions about frigidity and female sexual response. In one scene, Virginia measures her friend Jane’s physiological responses, such as heart rate and brain activity, for orgasms derived from vaginal and clitoral stimulation and finds them nearly identical, except that, contrary to popular knowledge at the time, the clitoral orgasm appeared to be stronger.

Animated gif’s posted on the Masters of Sex tumblr depict the moment Virginia and Jane compare her EEG readouts for clitoral and vaginal orgasms.

Later in the same episode, Bill instructs Virginia over the phone to pick up an anatomy textbook, which offers a simple explanation for why the two apparent types of orgasm may indeed be the same:

WILLIAM: Now, there’s a plate in the back, uh, a cross section of the female’s sex organs. See how the clitoral crura extend along the pubic arch almost to the bone? It’s at least conceivable that Freud’s mature orgasm
VIRGINIA: Is just another clitoral orgasm.
WILLIAM: Because the clitoris is stimulated in both cases.
VIRGINIA: So, uh, does this mean that
WILLIAM: Keep going.
VIRGINIA: Well, it means that a woman doesn’t need a man to provide pleasure at all. In fact, we may be better off without you.
WILLIAM: That was not exactly my point.

Virginia has trouble understanding why any woman would believe Freud’s theories about so-called immature orgasms, but Bill explains: “That’s why we keep the exam rooms stocked with Kleenex. A quarter of the women who walk through my door tell me they’re frigid.” Through these types of exchanges, the episode meticulously explains and dispatches with common misconceptions about female sexual response. Indeed, a 2009 io9 story, which incorrectly credits researchers who sonographically mapped internal clitoral structures with being the first to discover them at all, suggests that misconceptions may still be prevalent. It seems that despite Masters and Johnson’s groundbreaking research, debates and mythologies about clitoral, vaginal, or g-spot orgasms and whether they are physiologically distinct seem to persist. In a study of college students, roughly one-quarter could not correctly locate the clitoris on a diagram, and a similar proportion (25% of women and 33% of men) did not know that most women will not have an orgasm from coitus alone.5

This show taps into our desire not only to know about sex but also to know what we know about it. This might explain why sex quizzes are so ubiquitous. We want validation that we know what we know. Just like an online sex quiz, in weekly installments Masters of Sex teaches us something we (probably should but might actually not) already know. 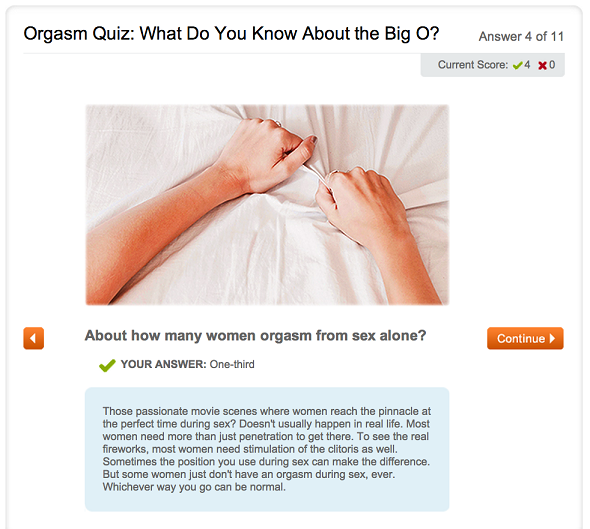 Quizzes about sex online, like this one from WebMD, are a common type of click-bait.

The program constantly reminds us with a wink that all the sex and nudity it portrays is purely and unassailably for the pursuit of scientific knowledge. The science content of Masters of Sex is often trotted out in promotional materials and reviews to give viewers permission to watch people have sex on TV. USA Today’s review reassures viewers: “They watched people having sex for their research, and so do we. But Masters and Johnson’s interest was not prurient and neither is the series. It’s explicit, but never salacious.” TV Guide likewise promises that the show “somehow never makes you feel dirty for watching.” Like the subjects who participate in Masters and Johnson’s studies by having sex with strangers while electrodes taped to their bodies measure their physiological responses, we seem to like telling ourselves that we’re only watching the show “for science.” 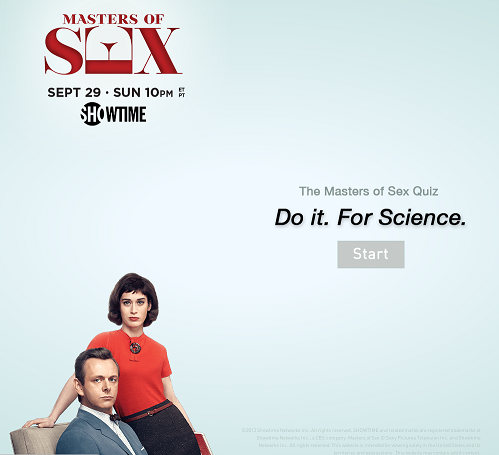 The show’s webpage also includes a 10-question quiz that invites viewers to test their sexual knowledge.

Perhaps all this earnest insistence that the show is really about science rather than sex implies that things have not changed very much. The fact that we need this excuse to watch suggests that we are still caught in the same kind of self-defeating struggles with shame about sexual knowledge that Masters and Johnson worked against. Given the ubiquitous commercial representations of sex in TV, movies, and the booming pornography industry, why do we need the veneer of science to give us permission to watch this show? Perhaps it’s because watching Bill and Virginia discover things gives us permission to learn basic facts about sex that we are supposed to already know. Indeed maybe we want to know what we know about sex because we feel so insecure about this type of knowledge.

In that sense it’s appropriate that for every move towards sexual liberation and self-knowledge, Masters of Sex takes one step backwards as well. For example, in the narrative structure of the show, and particularly in episode 4, Virginia’s supposedly unique sexual self-knowledge matters primarily because it matters to the men in her life. William Masters, Virginia’s ex-husband George, and the younger doctor Ethan Haas are all enthralled with her sexual prowess, which comes from her self-knowledge, her detachment between sex and love, and her willingness to talk frankly about sex.

Yet we hear little about how any of these qualities might benefit Virginia and a lot about how important they are to these men who are obsessed with her. Bill listens to Virginia’s ex describe her in an interview:

GEORGE [recorded]: This one’s different. She—knows her self. She knows what feels good, she’ll tell you. And she wants you to tell her what you want her to do to you. What your fantasy is. Which is a fantasy itself. I’m telling you, doctor, this woman is magic.

It is perhaps fitting then, that as George talks about how magical Virginia is, we see her rushing home to try to get dinner on the table for her two kids, missing her bus, and then settling in on the bench to wait for the next one. Though as the season progresses Bill recognizes her first as a research assistant and then as a co-author, the type of magic and sexual knowledge Virginia possesses hasn’t yet solved the problems of being a working single mother. I suspect we enjoy identifying with Virginia and congratulating ourselves for knowing everything she knows about sex. But in the pleasure of comparing ourselves favorably to the past, does it matter that this might require that we forget, at least temporarily, about the problems of the present? 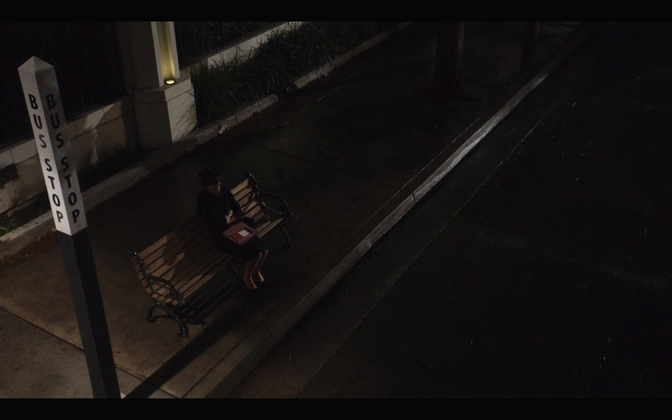 “I’m telling you, doctor, this woman is magic.”