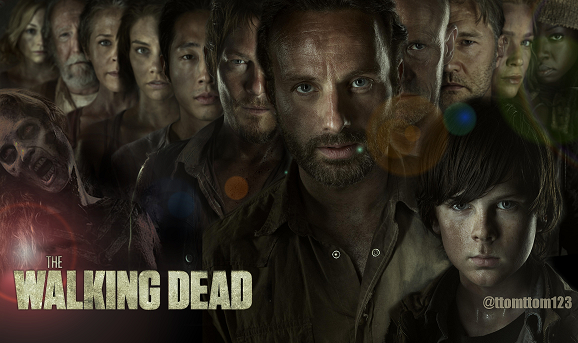 AMC’s The Walking Dead has received a fair amount of criticism for its representation of race, perhaps best summed up in the title of Lorraine Berry’s Salon.com article, written at the conclusion of season three: “‘Walking Dead’: Still a White Patriarchy.” Far from wanting to perpetuate a world divided by racial hierarchies, however, the creators of The Walking Dead have, from the beginning, seemed intent on making their post-apocalyptic world explicitly post-racial—beyond racial categories, beyond racial oppression, and beyond white privilege and power.

Rick Grimes voices this utopian aspiration in the second episode of the first season. Trapped on the roof of a building in Atlanta, surrounded by zombies, the survivors erupt into racial conflict, as the white Merle Dixon flings racial epithets at Hispanic and African-American characters and declares himself their de facto leader. When the inevitable fight ensues, Rick intervenes, beating and handcuffing Merle and declaring: “Things are different now. There are no niggers anymore, no dumb-as-shit-white-trash fools either. Only dark meat and white meat. There’s us and the dead” (“Guts”). Essential differences, theorized for centuries in terms of race, are displaced onto the absolute divide between “us and the dead.” From this point on, The Walking Dead seeks to imagine what it means to inhabit a post-racial world.

At first, alarmingly, this post-racial experiment seems less to usher in the disappearance of race than the disappearance of non-white characters. In fact, the post-racial, post-apocalyptic world ends up looking a lot like, well, the white patriarchy. African-American characters Morgan Jones and his son Duane help Rick survive his awakening to the apocalypse in the first episode of the series, but are then left behind as Rick moves on. The Morales family, a part of the original group of survivors, drives off to find family members in Alabama, and they aren’t seen again. The only African-American female character in the first two seasons, Jacqui, is not developed at all, has virtually no lines, and then chooses to immolate herself in Dr. Jenner’s destruction of the CDC in the season one finale.

Most notoriously, the series seemed unable, through the end of season three, to countenance more than one African-American male character at a time: after Morgan, there was T-Dog, who dies soon after the group discovers Oscar at the prison in season three. And once Tyreese appeared mid-way through season three, it surprised no one when Oscar was killed in a scuffle at Woodbury. T-Dog’s words from the second season episode “Bloodletting” are uncannily prophetic. Feverish from an infected wound, T-Dog says to Dale: “I’m the one black guy. Realize how precarious that makes my situation?” Precarious indeed. While T-Dog is worried about getting “lynched” in a world ruled by “two good-old-boy-sheriff-cowboys” and a “redneck,” he is in fact killed by the inexorable one-black-male-at-a-time logic of the series. Meanwhile, white men—Rick, Shane, Dale, Hershel, Daryl, the Governor—vie for leadership of the group. As Lorraine Berry writes, “white men have closed ranks and cemented their power.”

Despite obvious missteps, though, the writers of The Walking Dead have remained committed to their vision of the post-apocalypse as post-racial. Season three showed some signs they were succeeding, and season four has shown even more. Introduced in season three, Michonne has come into her own as a strong, central character. The same is true of Tyreese and his sister, Sasha, as well as former army medic, Bob. The series is emerging from tokenism, evidenced by the fact that in season four the survivors are ruled not by a white male patriarch (Rick) but are guided by a council that includes white, black, and Asian characters, women and men, old and young.

While the new post-racial world of The Walking Dead no longer erases people of color, it does, perhaps by definition, demand a studied indifference to racial identity. Virtually no reference is ever made by others or by themselves to the fact that Michonne, Tyreese, Sasha, and Bob are African American (or that anyone else is of a particular race). Race-thinking, when it infrequently happens, is represented as pathological. The first and only time T-Dog talks about race—“I’m the one black guy,” ruled by “good-old-boys” and “rednecks”—is when he’s sick, and his comment prompts Dale to worry that he has “gone off the deep end” and needs medicine fast. Alternately, race-thinking is the purview of the openly racist Merle—the only character who seems unable to let race go. In Merle’s case, his racism is part of his self-destructive, impulsive behavior, which he explains to Rick by saying, helpfully: “I don’t know why I do the things I do,” including, presumably, his insistence on calling Glenn a “Chinaman” (though he knows he’s Korean). Merle is the only person to remark on Michonne’s race, pointing out that it’s “ironic” that she has two chained zombie “slaves.” If T-Dog symptomizes race-thinking as a febrile hallucination, Merle manifests it as an unexamined reflex, an unthinking holdover from a past that’s now irrelevant.

In the world of The Walking Dead, race must be “let go.” The season four episode, “Indifference,” allegorizes this impetus. As Bob says early in the episode: “It helps to keep moving.” Daryl, Michonne, Tyreese, and Bob are on a run to find medicine. During the course of the episode, all three black characters are explicitly urged to “let go” of something. Devastated by grief and anger over the murder of his girlfriend, Tyreese hacks furiously at some vines and then holds onto the walker that lunges out at him. Michonne and Daryl yell at him to “Let go,” but he won’t, and Michonne confronts him later, asking him “Why the hell didn’t you let go?”, adding, “You should have let go.” Later in the episode, Bob almost falls off a roof and walkers grab at his bag. Again, Michonne yells, “Bob, let it go”; Tyreese shouts “Let it go. Let it go,” and Daryl says, “Let go of the bag, man.” And through her conversations with Daryl, Michonne learns, finally, to “let go” of her obsession with the Governor—realizing she needs to relinquish her anger and need for revenge in order to become part of the group.

While the things that Michonne, Tyreese, and Bob need to “let go” of are on one level, of course, specific to their stories within the series, the multiple explicit repetitions that they each “let go” also work, I argue, to signal The Walking Dead’s notion of what a post-racial world entails. It requires “letting go” of the past, along with the anger and the desire for redress that can animate memories of the racial past in particular. “Anger gets you killed,” Michonne says to Tyreese. Anger also isolates you, as it does to Michonne in her constant forays out of the prison in search of the Governor. Anger is represented as a dangerous compulsion, an unconscious holdover from the past (as symbolized by the alcohol Bob holds onto, despite himself). Bob tells Daryl, significantly, about having been “the last one standing” in two separate groups of survivors—and that he was “done being a witness.” Daryl tells him, “No need to be standing alone—not no more.” All three black characters are urged to “let go” of the past—of anger, grief, the desire for reparation, the need to be a “witness” to suffering. They are invited into the group—the new group, the only group that matters: “us” standing against “the dead.” Survival, belonging, the post-racial community, come at the expense of history. They demand to be “let go.”

In her critique of The Walking Dead, Lorraine Berry demonstrates precisely this unwillingness to “let go” of the past which is so inimical to The Walking Dead (and its fans). She raised the ire of many readers by interpreting Michonne through the lens of history, arguing that when the Governor tells Rick he won’t attack the prison if Rick turns Michonne over to him, Michonne was being treated as property, as currency, in a battle between white men—that the series thus evoked both slavery and lynching (at one point Merle puts a hood over her head). Numerous comments on the article vehemently disagreed with this reading, arguing that Michonne was, as one writer succinctly put it, simply “bad ass.” Michonne had evoked the Governor’s fury by being smart enough to see him for who he really was and for killing his (zombie) daughter and blinding him. Michonne becomes the Governor’s nemesis because of her intelligence and strength. She is not a “bargaining chip” between two white men. She is nobody’s property, nobody’s slave, nobody’s victim.

What The Walking Dead recognizes is that in this new post-racial world history can’t just be relinquished; it needs to be re-written. There must be a new narrative. The Walking Dead fills the vacuum of history with something else: white meat and dark meat, the living and the dead—and the weak and the “bad ass.”