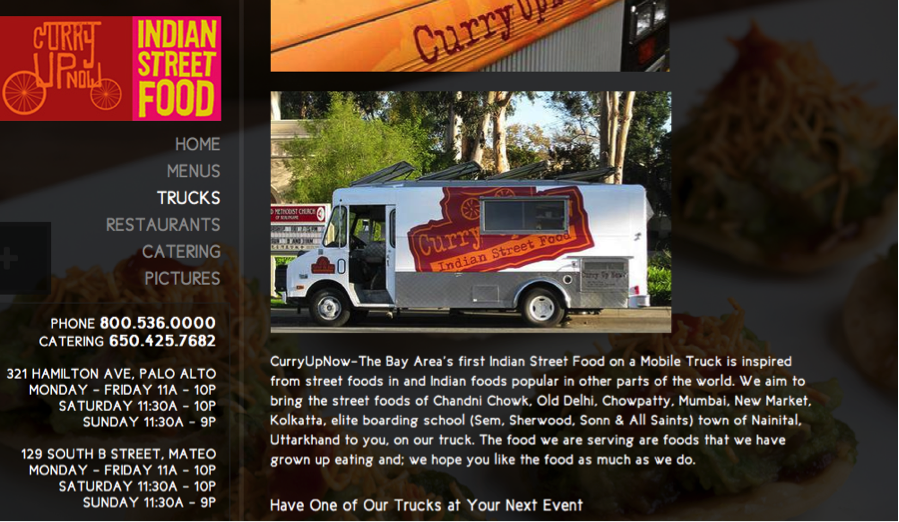 This semester in my undergraduate course “Asian American Media Cultures,” we have been talking quite a bit about food—“Asian” food as it is often broadly deemed—and its relationship to race, cultural capital and ethnic stereotypes. This column combines some of my thoughts that have emerged in the course of teaching this course quite regularly to a mix of Asian American studies majors and Radio-TV-film majors on the one hand and my own writing and researching about food metaphors in the information technology domain, Silicon Valley workplaces and Indian Americans on the other.

For many of the students in this course, it is the first time they are challenged to think critically about media institutions, texts and politics and to get away from the “accurate” or not dichotomy of thinking about representation. Likewise, I have many students for whom the diverse histories of Asian American communities in the US are a revelation. As one student put it, “I did not know that ‘Asian people’ have been in this country for so long. We never studied about them in school.” I have heard several versions of this statement over the years and have used the same to encourage students to be self-reflexive about such confessions and furthermore, locate it within a socio-historical context. How can we better understand the “I” of that statement but also view the “I” as a product of the political, historical, and social culture of the times. For example, when students learn about Asian immigrant labor in the United States in the 1800s, some try to think aloud as to why they assumed that Asian migration was a recent phenomenon.

These student reflections, I think, illustrate one set of concerns that emerge when considering Asian American invisibility or marginal presence in our public and media cultures. By the second half of the semester, however, a new question emerges. I call it the “ I don’t see what is Asian American about this media text,” question and is most commonly triggered when the media screening or clip shown does not obviously tackle either Asian American stereotypes or racism against Asian Americans. My strategy for such a question is to ask the concerned student, “what are you looking for when you look for the Asian American angle here?” It is around this time in the semester that as a class we begin to think and talk about deconstructing “Asian American” as a category. And how despite trying to engage the issue of race and difference within a critically informed framework, we seem most comfortable working with a basic set of criteria that are about marking race through cultural attributes, habits and ethnically-coded difference.

In the context of race and visibility in media and popular cultural spaces, I have been following how food, in particular—curry, that British invention overwhelmingly seen as the “authentic essence” of Indian food in the West— appears as a code for multicultural inclusiveness, or racist representations of Indian Americans as a menace or cultural pollutant in information technology spaces and places.1 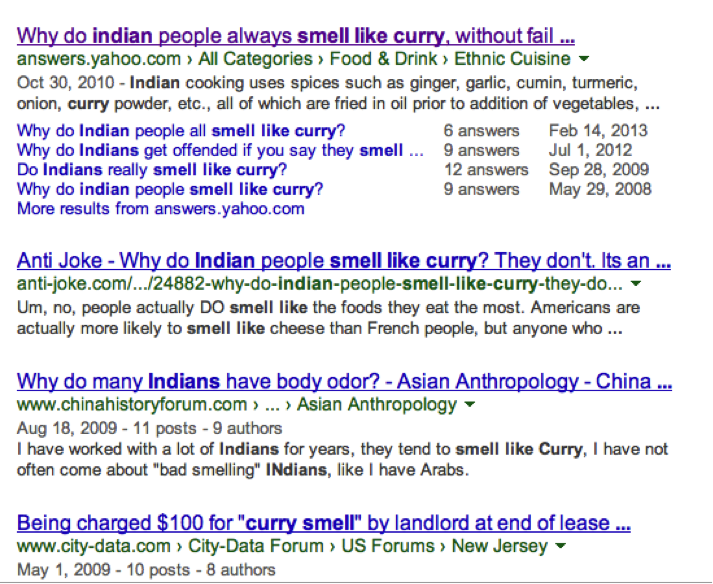 For example, while the Googleplex in Mountain View, California and Microsoft’s headquarters in Redmond, Washington serve up Indian food and a celebratory multicultural narrative through their campus food courts, the presence of Indian food in the technology domain and workplace is invoked in a very different way in some of the heated debates on online tech-centric forums. Curry invariably enters into a conversation about work visas, immigrant workers, Indian technology experts, outsourcing and the job market in the IT sector. Curry is used to mark or signify the overwhelming presence of Indian Americans in the workplace, a presence that lingers on despite being unwelcome. As opposed to the taste, look, color or texture of the food, it is the smell of curry that is frequently brought up in these workplace confrontations and tensions. For example, in a 2010 thread on dice.com, a conversation about dwindling jobs in the IT sector very quickly veers into a rant about a co-worker heating curry in the office microwave, feeling trapped by the lingering smell and by the Indian infestation in the office.2 The idea of the curry menace, embedded in the forum comments is not new. In the early 2000s, discussions about racism in Silicon Valley highlighted how Indian American dominance in the tech world was viewed as a curry menace; go back a little over a century and we find that South Asian and Sikh migrants were referred to as curry heads and curry menace.3 Type in curry, Indian and Silicon Valley in an online search engine and it is impossible to not see multiple references to the following statement by Michael Lewis in his 1999 book, The New, New Thing: “The definitive smell of a Silicon Valley start up is that of curry.”4

It is important to think about what food references and food smell or odor imply in multicultural America where diversity is ostensibly celebrated but also increasingly a site of intense confrontation and debate. In week 2 of my Asian American media cultures class, I usually offer a historical overview of Asian immigration to the US and do the big picture survey of how “Asians” are produced as the foreigner within. This semester, on the day I was going to talk about “curryheads” as a racist and pejorative reference in the 19th and early 20th centuries, we ended up talking about Nina Davuluri who was crowned Miss America earlier in the week. As the first Indian American to win the title, Davuluri was celebrated as a symbol of multiculturalism and racial progress; her win also generated a racist backlash. A lot of press was generated around Twitter and the racist tweets that linked Davuluri to terrorism, Arabs, 7-11 convenience stores, 9/11, and Muslim Obama. Once it became clear that Davuluri was Indian American and not Arab American, the racism became more focused on Indian American stereotypes and the predictable ‘curry’ reference made its way in innumerable forums and comments sections of online news—of Davuluri constantly smelling of spices, of being a “curry-muncher” and of curry during Thanksgiving being an absolutely revolting idea.

In the days that followed, The Daily Show with Jon Stewart did a segment on the Miss America pageant where Aasif Mandvi began his “Back with Brown” segment challenging Jon to “wake up and smell the curry.” 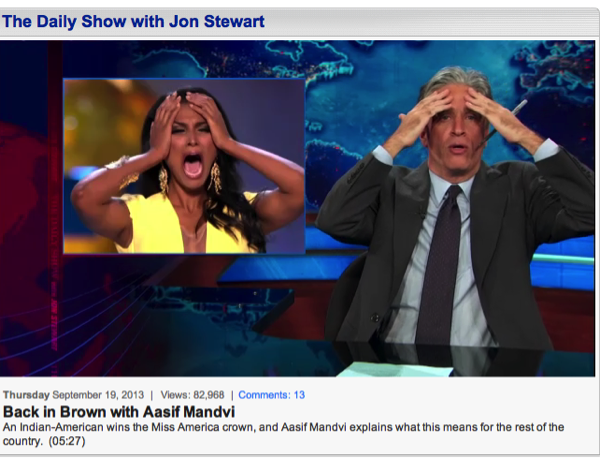 Mandvi’s segment, seen here, links Davuluri’s historic win to another achievement by fellow New Yorker, Arvind Mahankali, the winner of the 2013 National Spelling Bee competition, before suggesting that by selling unhealthy foods (through 7-11 stores) and treating health complications resulting from that (by joining the medical profession), Indian Americans were taking over America. Mandvi’s appropriation of the “smell of curry” usage is for a different agenda. While some Indian American stand up comedians incorporate curry jokes into their routine to critique Indian American culture (and in turn face the criticism that they are thriving off stereotypes), is Mandvi here attempting to use it to call attention to the racist attitudes behind the use of curry? Or more broadly, food as a referent for the sensorial experience of encountering difference and the olfactory system as a mediator of the anxieties produced by such encounters. Anxieties such as those expressed in this Time magazine article from 2010, where the author describes the changes to his home town Edison, New Jersey, as a result of the growing Indian American community there in the following way: My town is totally unfamiliar to me. The Pizza Hut where my busboy friends stole pies for our drunken parties is now an Indian sweets shop with a completely inappropriate roof. The A&P I shoplifted from is now an Indian grocery. The multiplex where we snuck into R-rated movies now shows only Bollywood films and serves samosas. The Italian restaurant that my friends stole cash from as waiters is now Moghul, one of the most famous Indian restaurants in the country.” And stretching the anxiety over race and immigation further, the writer adds, “Whenever I go back, I feel what people in Arizona talk about: a sense of loss and anomie and disbelief that anyone can eat food that spicy.”5