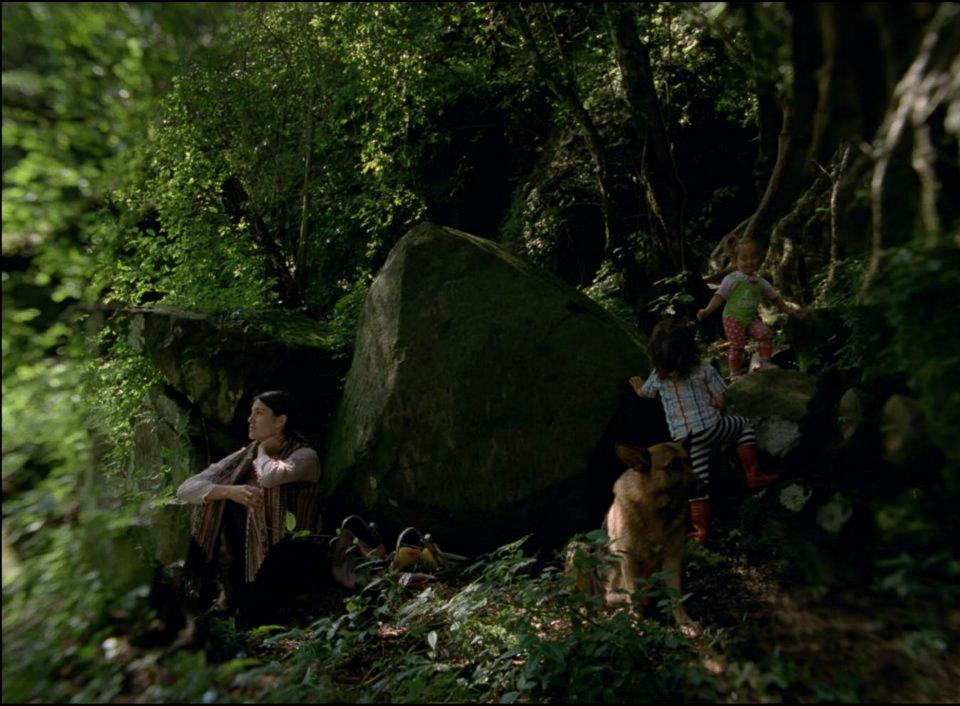 The work of Mexican director Carlos Reygadas polarizes critics. His most recent film Post Tenebras Lux/After Darkness, Light (2012), which was booed by audiences at Cannes and awarded Best Director at the same festival, is just one indication of this. I would argue that this is not just because Reygadas subverts the conventions of narrative cinema (which, as an art film director, is to be expected), but also because he subverts the cinematic stereotypes of Mexican film and the tropes of art cinema that would most readily seem to categorize his work. In this column I will look at how Reygadas both defies facile categorizations and, ultimately, how he uses cinematic aesthetics to create new structures of engagement and understanding that challenge us to broaden the limitations of our own humanity.

Two of Reygadas’ four feature films, Japón/Japan (2001) and Batalla en el Cielo/Battle in Heaven (2005), were funded in part by the Hubert Bals fund– an initiative of the International Film Festival of Rotterdam whose interest is in promoting innovative, non-commercial cinema in “developing nations.” According to the fund’s own guidelines, the films it supports have to be “original, authentic and rooted in the culture of the applicant’s country.”1 The assumption that there is a fixed cultural authenticity that can be called upon in film is, of course, problematic, and seems to be one of the things that Reygadas challenges in his work.2

Reygadas’ first film Japón challenges the notion of cultural authenticity in its very title, for the film has nothing to do with Japan, nor is the country mentioned in it at all. It tells the story of a white, middle-aged man from Mexico City who travels away from his home to a remote village in the countryside in order to end his life. In the village he meets an elderly indigenous woman named Ascen (Ascención) who gives him shelter in the barn of her rundown house. She offers him hospitality and kindness, which he rejects, until he is overcome by an incredible sexual desire that he needs to satisfy before his death, which she agrees to oblige him in.

The scene of their sexual encounter is one of the film’s most jarring, in part because Ascen appears in full frontal nudity. Though many critics have deemed this scene gratuitous, or exploitative even, I would argue that through it, Reygadas seeks to challenge our expectation of what the role of an elderly indigenous woman might be in a Mexican art film, by positioning her as an erotic object whose passive complicity in the sex act invites a more complex contemplation of her character, rather than relegating her to the clichéd representation of national folklore. I see Reygadas as making us contemplate the extremely narrow view of human sexuality that we have been conditioned to see on screen as well, and how conventional cinematic representation might serve to limit, rather than broaden, our perception of humanity. This scene makes us aware that the elderly person is not “other”- that our shock at seeing a naked aging body is really a shock at the inevitable trajectory of all bodies, and thus a shock about what it ultimately means to be human. Through this stark realization, Reygadas reveals the potential that cinema has to be truly cosmopolitan, to the extent that it gives us structures for developing empathy towards the foreign and the unfamiliar, and for understanding more deeply the divide between self and other.

Reygadas invites this type of empathy most powerfully in his film Stellet Licht/Silent Light (2007), which is about Mennonites in rural Mexico, and whose dialogue is entirely in Plattdeutsch. In this film he clearly subverts what audiences might expect a “Mexican” cinematic experience to be, in favor of an exploration of the philosophical issues of human suffering, faith, love and the sublime. This film is surprising (as Martin Scorsese has called it), both for its subject matter atypical of Mexican cinema, but also because it draws us into the main character Johan’s emotional landscape in a powerful way from the beginning, taking us off guard.

Johan is a man who cares deeply for his wife and their six children, but who falls in love with Marianne, another woman in the Mennonite community. In his interaction with his wife in their opening scene, he tells her he loves her and she returns the sentiment. Then she leaves the house with their children to allow him to be alone with his thoughts:
[youtube]http://www.youtube.com/watch?v=3AJM8MacMBo[/youtube]

The visual language of this scene- the extreme long take and slow forward tracking shot- and the haunting, mundane sounds of the rooster crowing off screen and the spoon hitting the table, combined with the slow crescendo of Johan’s emotional vulnerability (who, like Ascen and most of Reygadas’ characters, is not played by a professional actor) pulls us in gradually to his inner world, creating a powerful sympathetic resonance between character and spectator which sets the emotional texture of the film. From this point on we are led to think and feel with Johan. Reygadas does this not in the mainstream cinematic way of point-of-view character identification, but rather in creating an affective realism through physical and emotional proximity between character and spectator. He invites us not to identify with Johan nor to judge him, but rather to simply feel his pain and sadness.

The ending of Stellet Licht is a conscious citing of Danish director Carl Theodor Dreyer’s 1955 film Ordet/The Word, which complicates the film’s cultural provenance by placing it as a direct spiritual descendent of the tradition of European art cinema. Reygadas asserts no filmmaking training other than watching the films of directors like Dreyer, Tarkovsky and Antonioni, whom he names as his greatest influences. Thus in Stellet Licht he broadens Mexican cinema’s aesthetic and spiritual purview, by showing how a Mexican director cannot be excluded from making a European art film by virtue of geography, culture, or even language.

Reygadas’ most recent film, Post Tenebras Lux/After Darkness, Light (2012), is perhaps his most challenging in terms of its aesthetics: a beveled lens that refracts the edges of all exterior shots, a demon figure rendered in CGI, and a head ripped off in the last scene, all incorporate blatant computer graphics and other special effects into the naturalistic mode of art cinema, and were undoubtedly responsible for much of the negative audience reaction at Cannes. In believing that Reygadas’ aesthetic challenges are meant to urge us to reconsider the limitations of our own perceptions of humanity, however, I see this film- one which he made after a five-year hiatus taken to rear his children- as a call to reawaken our vital senses through the art of cinema itself.

The film’s narrative revolves around the corrosive effects of patriarchy: two families- one affluent and white, the other poor and mestizo- are both damaged by the father’s inability to control his own dark forces. Juan, the patriarch of the wealthy family, has violent rages and is addicted to internet pornography; Seven, who works on Juan’s land, is an alcoholic who neglects and abuses his wife and children.

The narrative is framed by the entrance at the film’s beginning and end of the bright-red demon figure into the sprawling country house of Juan and his wife Natalia. The demon’s overt male genitalia suggests the film’s connection between evil and masculine sexuality (or patriarchy on the macro level). The jarringly artificial aesthetics by which the demon is rendered seem silly and out of place, but ultimately that is the point: his entrance into the domestic space, where he soon comes face to face with the couple’s toddler son (while their daughter frolics in nature), highlights the unnaturalness of male sexual aggression’s interruption of the harmony and vitality of familial bonds and childhood innocence.

The sexual and emotional dysfunction of all of the adult characters in the film is juxtaposed throughout to the vital connection between childhood and the natural realm. This is reflected most strikingly in the film’s opening scene, in which a toddler (played by Reygadas’ own daughter) wanders alone in a field amongst animals, giddy as she points to them with newly learned words:

The film ends abruptly with a scene of a male rugby team in England who vows to crush their opponents through solidarity and aggression. This ending, on the surface unrelated to the larger narrative, leaves us to contemplate what lies between the prelapsarian Eden of childhood innocence and the learned aggression of societal conformity. I would argue that Reygadas shows us that the “other” here is ourselves; a connection we have lost- to nature, to our sensuality, to each other- and he leaves us to contemplate why, and how we might reclaim it. Ultimately his suggestion, I believe, is that cinema itself holds the potential for such illumination, being itself “light after darkness.” Only if, however, it is able to transcend the conventional representations that reinforce our own prejudices, disconnects and fears.