The Latin American television industry caught the attention of scholars worldwide given the rising visibility of a media counter flow resulting from the increasing presence of telenovelas in the world television market place. The rise of regional players such as Mexican Televisa, Brazilian TV Globo and Venezuelan Venevision was hailed as proof that cultural proximity drives audiences’ decisions in spite of the overwhelming presence of U.S. media in these countries1. Media counter flows were best represented by the conspicuous presence of Latin American telenovelas in the U.S. television market through Spanish-language television networks. However, since the 2000s, the rise of the Hispanic market as a magnet for media production piqued the interest of U.S. corporations and media conglomerates in which the push for original production resulted in the rise of Miami as new hub for U.S. Hispanic media and Latina/o popular culture for Latin America2. Since that time, NBC-Telemundo deployed a production strategy that sought to attract the U.S. Hispanic audience as well as Latino audiences across the hemisphere. Taking advantage of what Miller and Leger3 describe as runaway production, Telemundo pursued partnerships in Mexico, Colombia and Brazil to tap into the cultural resources of professionals in these countries, while finding competitive prices due to the different conditions of labor between the U.S. and Latin American markets. Mexican production has been historically relevant to the U.S. Hispanic television market due to the demographic composition of the Latino population with 65 percent of Mexican descent4. However, the duopolistic conditions under which Televisa and TV Azteca have operated in the Mexican market and their links to Univision and Azteca America respectively made it harder for other U.S. television networks to find a source of Mexican television programming appealing to their potential audiences. As a result, the networks looked for other alternatives. Due to the success of the Yo soy Betty, la fea across the different Hispanic audiences in the U.S., and the composition of the Colombian industry, the South American country was seen as a valuable programming source and as potential site for production with regional and global appeal. As a result Telemundo sought partnerships with RTI and Caracol TV, resulting in the rise of production made in Colombia. Telemundo also incorporated the Mexican house producer Argos as a partner to keep the Mexican flavor of some of their productions. It also cultivated a co-production strategy with Brazilian TV Globo for the adaptation of successful fictional formats. Meanwhile, in the U.S. the network has reinforced its production infrastructure in Miami, becoming a national and regional production leader in the last ten years. Following the steps of Telemundo, NewsCorp/Fox, saw in Colombian as a good place to locate their production, bought the independent house production Telecolombia and stroke agreements of distribution with the television network RCN. The success of these partnerships resulted in the in the launch of a new U.S. Hispanic television network, MundoFox in 2012. ABC/Disney, Sony Pictures, and MTV/Viacom have also ventured in a series of co-productions with Latin American partners across the hemisphere, such as Vista Productions in Colombia, Polka Productions in Argentina, and TV Azteca in Mexico among many others.

Changes in the television flows within the region

The strategy followed by the U.S. media conglomerates to increase their production output for the Hispanic and Latin American markets has been felt in the region, challenging a long standing three tier media order described in the 1990s by Roncagliolo5 in which there were net exporters (Brazil and Mexico), new exporters (Venezuela, and Argentina followed distantly by Colombia, Peru and Chile) and net importers (all the other countries in the region). The strategy followed since the 2000s by the U.S. Hispanic industry has maintained the predominant role of Mexico as producer and exporter of fictional programming, while it has also increased the presence of Colombian and U.S. Hispanic production and their regional visibility.
The following tables shows the number of titles or hours of new releases of fictional programming in the main television markets within the region: Argentina, Brazil, Chile, Colombia, Mexico, Portugal, Spain, Uruguay, U.S. Hispanic and Venezuela as reported by the Ibero-American Observatory of Television Fiction in the years 2010, 2011, and 20126. While in terms of new releases in fictional programming, the average of the overall national production counted for 37 percent, among the aforementioned main markets within the region, the imports from the Ibero-American region counted for 63 percent average in countries within the region, but the distribution of these dynamics is quite uneven. Brazil led the market as consumer of its own production with only 12 percent of imported fictional hours, followed by Spain with 13 percent and Mexico with 32 percent. In 2012, Brazil did not premiere a single title released from another country, so their own productions made up 100 percent of their new fictional programming offerings. In contrast, Uruguay imported 98 percent of its new fictional programming followed by Venezuela with 86, Chile with 80 and the U.S. with 79 percent. While Brazil has become exclusively an exporter, Mexico took the place as the main producer of fictional programming for its own market, followed by Brazil, Colombia, Portugal and Argentina. 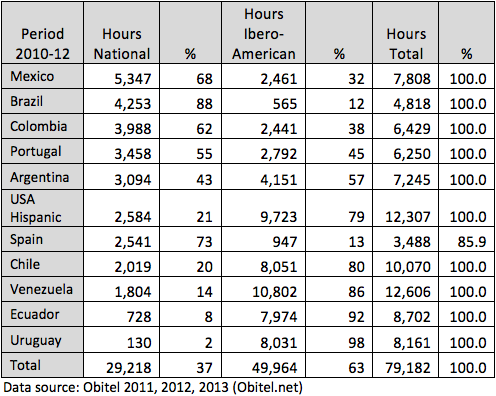 But when we look at fictional programming flows in the last three years (2010, 2011, and 2012) within the main television industries of the Ibero-American region7, a different picture emerges. Taking into account only the broadcast hours of new releases in the national television networks, four countries dominate the programming flows: Mexico, Colombia, U.S. Hispanic and Brazil, followed distantly by Venezuela and Argentina. In this period, Mexico has secured its position as the hegemonic source of programing with 40 percent of the total flows across the main markets in the region. However, the main recipient of Mexican production is still the U.S. Hispanic market which counted for around 27 percent of Mexican new releases. Colombia, while in third place as a producer, has become the second most important source of programming among these markets with 17 percent of the total flows. Colombian exports have found in Venezuela, Ecuador and the U.S. their main regional new release recipients, with 36, 27 and 14 percent respectively. The U.S. Hispanic market, while occupying the sixth place as a producer, has jumped into third place as programming distributor with 13 percent of the flows. While the U.S. programming flows have diversified across different countries, the main recipients of their programming are Venezuela, Chile and Mexico with 23, 21 and 17 percent respectively. Brazil which is arguably the most important exporter of fictional programming at global levels, in the region has fallen into fourth place with 12 percent. While TV Globo shows a robust and dynamic performance as the hegemonic source of productions and leads the rating numbers across the region in comparison to other markets, the network has exported the bulk of its programming to Portugal and neighboring countries such as Argentina, Uruguay and Chile. Portugal alone accounts for 38 percent of Brazilian fiction exports to the region followed by Uruguay with 17, Chile with 16 and Argentina with 7 percent. 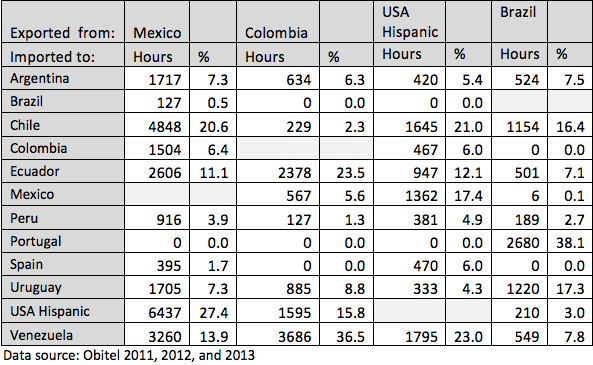 The combined hours exported by Mexico, Colombia, the U.S. and Brazil comprises 80 percent of the total programming flows. Furthermore, it is important to underscore that these countries’ position as exporters is largely based on the programming distribution of a few media corporations: Mexican Televisa, Colombian RCN and Caracol TV, Brazilian TV Globo, and the U.S. Hispanic Telemundo, followed in a second tier by Mexican TV Azteca, Venezuelan Venevision, and Argentinean Telefe and El Trece.

This landscape only shows national broadcasting television network offerings and the productions coming from Ibero-American countries. A more subtle but complex landscape arises if we considered co-productions as multinational properties and assigned them to all the countries involved, not merely the main players. Furthermore, if we take into account countries as sources of innovation and providers of scripts and formats, the balance tips to the South, with Argentina, Colombia, Chile and Brazil providing most of the titles to be produced across the region. It is important to note this landscape does not include US English language productions, and it also does not include cable television fictional programming. While broadcasting television is still a media space dominated by national or regional players, particularly in primetime. Cable television offers a very different picture, with U.S. global media corporations having an overwhelmingly dominant position.