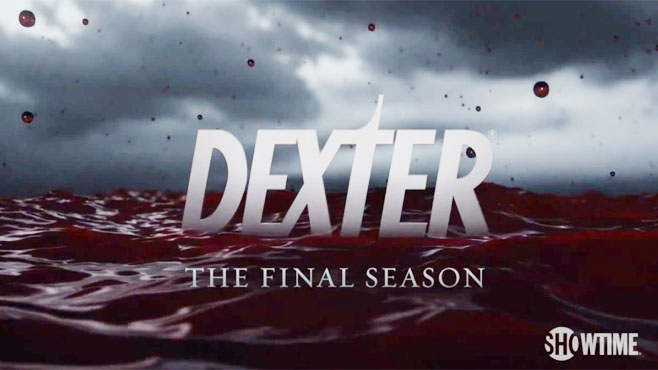 The Final Season of Dexter

Showtime’s Dexter (2006-2013) has taken some criticism over the last few years, but its recent final episode (which aired on September 22, 2013) stays true to what has been great about the series. For ninety-six episodes, Dexter Morgan (Michael C. Hall), a self-confessed “monster,” has struggled to maintain relationships and have a “normal” life, to evolve and become “human.” The finale made it clear that he can’t do any of those things. Dexter was “born in blood,” as he said more than once, and there he remained.

Americans tend to believe we can transcend circumstances that limit and entrap. Metamorphosis is what drives our favorite TV narratives. Mad Men’s Don Draper, Breaking Bad’s Walter White, and Homeland’s Nicholas Brody overcome poverty, disease, and trauma to become the centers of their fictional worlds, steering their own courses, sometimes seeming more like Nietzschean supermen than mere mortals. And however tenuous their power, however fragile their rise above their origins, their stories are driven by their willful self-making.

Dexter Morgan, however, did not make himself and cannot, it turns out, re-make himself. He was “born” at the age of three in the shipping container where his mother was butchered by a chainsaw-wielding drug dealer and where he sat for two days soaking in her blood. He was nurtured by a foster father who believed Dexter could not overcome his urge to kill. “It got in you too early,” Harry Morgan (played by James Remar) tells his young son. So Harry channels Dexter’s urges, giving him “the Code,” whereby Dexter kills only those who kill. Reinforcing the inevitability of Dexter’s nature, Harry shows him scans of his brain and those of a serial killer: they are identical. 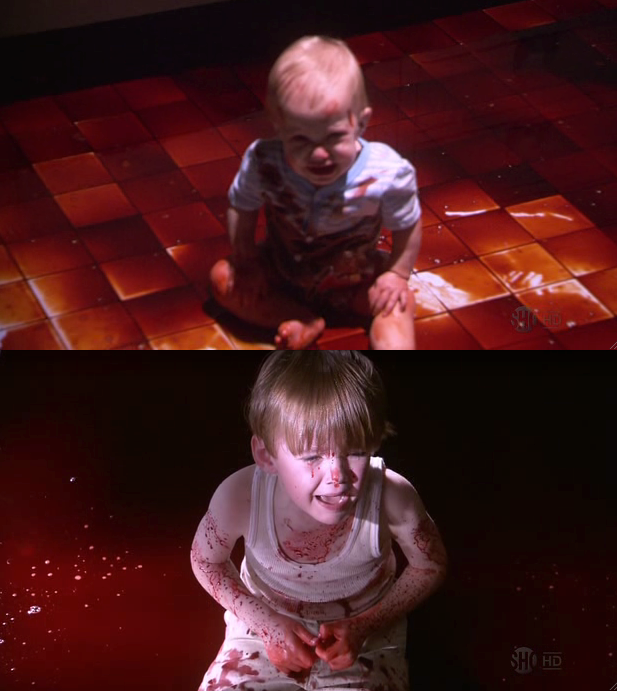 Harrison (above) and Dexter (below), born in blood

That Dexter was born not from his mother’s body but from the place where he witnessed her slaughter never lessened the point the series wanted to convey: Dexter was born a killer, even though he was “born” when he was three and from a deeply traumatic event. Nature and nurture were thoroughly intertwined: nurture (his mother’s death, Harry’s “code”) became his nature. In this, Dexter represents complex truths about propensities to violence emerging from the field of neuroscience. As Adrian Raine, criminologist and psychologist at the University of Pennsylvania, puts it in his new book, The Anatomy of Violence, social factors do not shape our behavior in a vacuum—there is no “blank slate”: our environment interacts with our bodies, “directly producing the biological changes that predispose a person to violence.”1 Or, as Dexter says in a season five episode, “Some experiences are so big they change your DNA.” They also change your brain, and no amount of struggling on Dexter’s part could change the dictates lodged in his body.

If narratives about our being determined underscore our “stuckness,” as Jennifer Fleissner has argued about American naturalist fiction,2 Dexter emphasizes how its protagonist is “stuck” through the always palpable presence of blood. Dexter can never be free of blood (his urge to kill) because it’s literally in his blood: it’s what he’s inherited by birth in the conventional sense (from his biological parents), but it’s also what he inherited when his mother’s blood seeped in him from outside. His inheritance by blood is doubled—and the series dramatizes this truth from beginning to end, never allowing Dexter to evade it although he sometimes, tragically, believes he can.

In season one, the “Ice Truck Killer” (in reality Dexter’s brother, Brian, played by Christian Camargo) leads Dexter back to the memory of his “birth” at age three. In “Seeing Red,” Dexter realizes that the frightening “boy in blood” that he’s been glimpsing in his head is himself. He remembers his mother’s murder, and he realizes why he’s chosen a life where he searches “for meaning in blood.” After all, “the sole memory I have of [my mother] is being covered in it.” The moment of Dexter’s “birth” is shockingly repeated in the season four finale when Dexter’s wife, Rita (Julie Benz), is killed by the serial killer he’s been pursuing all season (brilliantly played by John Lithgow), and Dexter’s son (Harrison) is left sitting in her blood. Dexter’s voiceover tells us, as shots of his son sitting in blood are intercut with shots of himself, at three, in blood, “I thought I could change what I am—keep my family safe. But it doesn’t matter what I do, what I choose. I’m what’s wrong. This is fate.”

The ending of the season four finale, “The Getaway”

Dexter’s “fate” moves inexorably on and in the final season he finds himself in a pool of his “mother’s” blood again, as the woman who helped create him, Dr. Evelyn Vogel (played by Charlotte Rampling), has her throat cut by yet another serial killer (the “Brain Surgeon,” played by Darri Ingolfsson). Dexter says: “The last time I was in a pool of my mother’s blood, I was too young to do anything about it,” but what Dexter does this time, in his doomed struggle to change his fate, leads to his sister getting shot, lying in another pool of blood. Dexter’s job as blood spatter analyst may give him a feeling of control over blood, feeding his hope that he can transcend his “blood,” overcome who was born to be, but that control, that hope of transcendence, end up utterly foreclosed.

Dr. Evelyn Vogel has her throat cut by the “Brain Surgeon” in front of Dexter

Dexter sister, Debra, is shot by the “Brain Surgeon”

The working out of Dexter’s fate culminates with the death of his sister (played by Jennifer Carpenter), about whom he says, in the very first episode of the series: “If I could have feelings for anyone at all, I’d have them for Deb.” And he did have feelings for her, and he suffered from her death in the season finale. But mostly he suffered the loss of what she was to him. As Vogel had pointed out, Debra reflected a positive image of himself, one that balanced the “monster” he sees. But the mirror Debra held up to Dexter cracked when she found out who Dexter really was (at the end of season six), and then it broke when she died. Dexter was forced to look at himself, finally, not at the reflection Deb offered him, and he saw the unmediated monster he was: he saw a “trail of blood and body parts.”

The illusion that he can be anything other than the monster he was born to be, that “there’s a human in there,” as Debra had hopefully told him, falls from Dexter at his sister’s death. He takes her body out to the middle of the ocean and drops her in, his last victim. And Dexter Morgan drives his boat into the hurricane and dies.

Whoever, whatever, we see in the last scene of the series, logging in the Northwest, it is not Dexter Morgan—son, brother, father, lover, friend, blood spatter analyst. In the final frame, the shell of who Dexter was sits at a table and stares blankly at the camera. There is no more voiceover, no more self to articulate—only emptiness, only silence.

The ending of the season eight finale, “Remember the Monsters?”

Dexter said once that he’s “evolving from the primordial ooze of my mother’s blood.” He learns, however, that he cannot. The final episode is entitled “Remember the Monsters?” Well, Dexter does remember. He remembers that he is the monster.