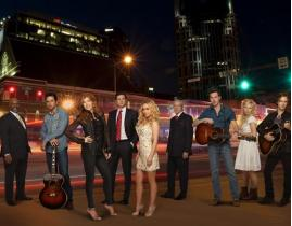 Promotional Photo of the Cast of Nashville

Mainstream country music has evolved over the years from the early folk/country songs of Johnny Cash to more contemporary country as performed by singers such as Luke Bryan and Blake Shelton. Contemporary country songs are filled with lyrics about women, beer and whiskey, war, guns, and pick-up trucks among other things. These staples of country songs paint a clear picture of what male country music stars should look like and what their interests should be. Over the years, a male country music singer has become synonymous with rugged, man’s man masculinity that is overwhelmingly white, heterosexual, and undoubtedly in control of themselves. Images of male country music singers are so uniform across the board that they almost seem one dimensional, however, television portrayals of country musicians in ABC’s Nashville (2012) complicate the image. This article will examine the characters Deacon Claybourne and Will Lexington from Nashville in order to expand and attempt to complicate the media’s understanding of male country music stars.

ABC’s show Nashville, which premiered in the fall of 2012, follows two country music stars, Rayna Jaymes, a country music legend who is struggling to maintain her legend status, and Juliette Barnes, a young country starlet who wants to be taken seriously as an artist.1 The show, while primarily focused on Rayna and Juliette, also follows a slew of other characters including Deacon Claybourne and Will Lexington. Deacon Claybourne is Rayna’s longtime song writing partner, band leader, and lover while Will Lexington, introduced later in the season, is the upstairs neighbor of two of the show’s other characters, Scarlett and Gunnar. Both Deacon and Will seem to fit the country music star mold as they are both white, seemingly heterosexual, and enjoy pursuing women, however, despite their appearance as heteronormative country music singers, both falter in some way from expectations of country music performers. Deacon is a recovering alcoholic while Will is a closeted homosexual. Country music often talks about drinking beer and whiskey, however, it rarely mentions alcoholism. Similarly, country music is full of stories of unrequited love, broken hearts, and meeting the girl of one’s dreams, however there is almost no mention of non-heterosexual relationships and currently there are no major mainstream country music stars that are openly gay. 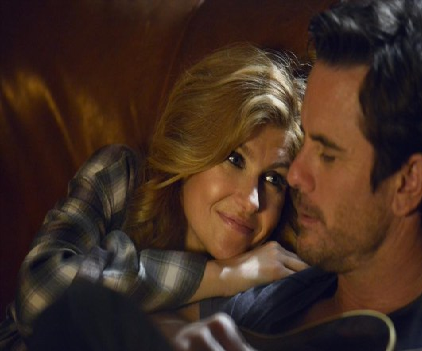 Country music stars are supposed to be steadfast and sure of their masculinity, however, Deacon wavers from the masculinity expected of him. One aspect of hegemonic masculinity as defined by Raewyn Connell is that men are to be in control at all times through the domination of women and gay men.2 While Connell expresses the importance of remaining dominant in relationships with others for hegemonic masculinity, there is also the implication that one most remain dominant of one’s self. Throughout the series, Deacon struggles with his alcoholism and remaining sober. In the final episode of the first season, “I’ll Never Get Out of This World Alive”, Deacon finds out that he is the father of one of Rayna’s children but Rayna decided to keep it a secret from him. Upon finding out that Rayna has lied to him for more than a decade, he finds himself in a bar and eventually takes his first drink in many years, plunging him into an alcohol fueled bender and ultimately out of control of his life.3 Even though Deacon seems like the prototype for a typical country music singer throughout the season, in control of his life through his sobriety, in the season finale he demonstrates that he is not as together as he may seem. Despite points in the season where it seems as if Deacon will fall off the wagon, he resists and pulls himself together and gives off the appearance that he really has control of himself. His inevitable collapse into drinking undercuts his status as a country music singer who can manage his liquor and maintain a firm grasp on his life. 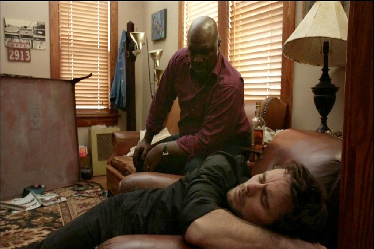 Deacon Out of Control and Drunk

Beyond Deacon’s failure to remain sober, because Rayna chooses to withhold the fact that he is the father of her oldest daughter, Deacon is no longer in control of the relationship between himself and Rayna. Being a father falls in line with being a breadwinner which Connell describes as one of the key points of hegemonic masculinity4 , so be for Deacon to be denied his fatherhood because of his alcoholism by Rayna is a strike against his masculinity. Also, because Rayna made the decision to keep Deacon’s child a secret, she becomes the dominant person in the relationship and Deacon becomes subordinate. Even though, at the beginning of the series, Deacon seems to be the model of self-control, he is unable to maintain control of his emotions and eventually returns to his old, alcoholic ways undercutting his masculine, country music performer image.

While Deacon is unable to control himself, Will Lexington maintains a strong sense of self-control in the name of ambition and the desire to be the next big country music star. When Will is first introduced, he seems like a typical cowboy who has decided to move to Nashville in order to pursue a music career. The audience, as well as characters within the show, see him hook-up with women and no one has any reason to question Will’s sexuality, however; toward the end of the season, Will loses control for a brief second and kisses Gunnar (his downstairs neighbor). Gunnar reacts adversely and Will quickly realizes the implications of his actions. In a later episode, Will explains to Gunnar when he was a teenager he was caught having sexual relations with a male friend and was kicked out until he could figure out his sexuality. 5 Will goes on to explain that he has never gone home implying that he can never go home because he is gay. The conversation ends with Will declaring the he is going to be a country music star and he will do whatever it takes to get there. In the season finale, Gunnar walks in on Will hooking-up with a woman. Confused, Gunnar questions Will about his actions only to be met with a reiteration from Will that he is going to be a country music star. 6 Because Will feels it is impossible to become a country music star if he expresses his true sexuality, he implies that it is unacceptable and abnormal for a cowboy/country music star to be any sexuality besides heterosexual. Will is willing to suppress his own sexual identity in order to achieve his biggest dream. Whereas Deacon has no self-control, Will has plenty, and it is because of his self-control that he is able to pass for his desired image of a cowboy who can sing country music. Because Will is suppressing his homosexual desires, he is dominating himself causing an interesting tension in regards to hegemonic standards of masculinity. If a person is both dominating and dominated at the same time, then hegemonic masculinity is neither realized nor unattained placing Will in an identity Limbo. 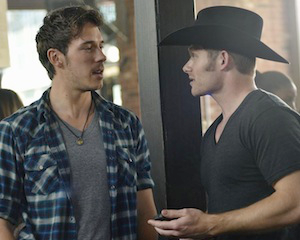 Gunnar (Left) and Will (Right)

While Deacon and Will represent two different diversions from the typical image of a country music star, they both differentiate themselves through how they exhibit self-control or lack thereof. Because Deacon cannot control his emotions about being the father to one of Rayna’s children and therefore his alcoholism and Will cannot afford to let go of control of his sexual identity, neither fit the male country music star stereotype. Even though, at first glance, Nashville seems to be teeming with male characters that are all cut from the same country cloth, Deacon and Will offer an interesting look into the depths of someone who does not meet the expected characteristics of a man living and singing in Nashville. Where country music paints a one dimensional character, Nashville expands and challenges what a real country music singer looks like.

1. Promotional Photo of the Cast of Nashville
2. Rayna and Deacon
3. Deacon Out of Control and Drunk
4. Gunnar (Left) and Will (Right)