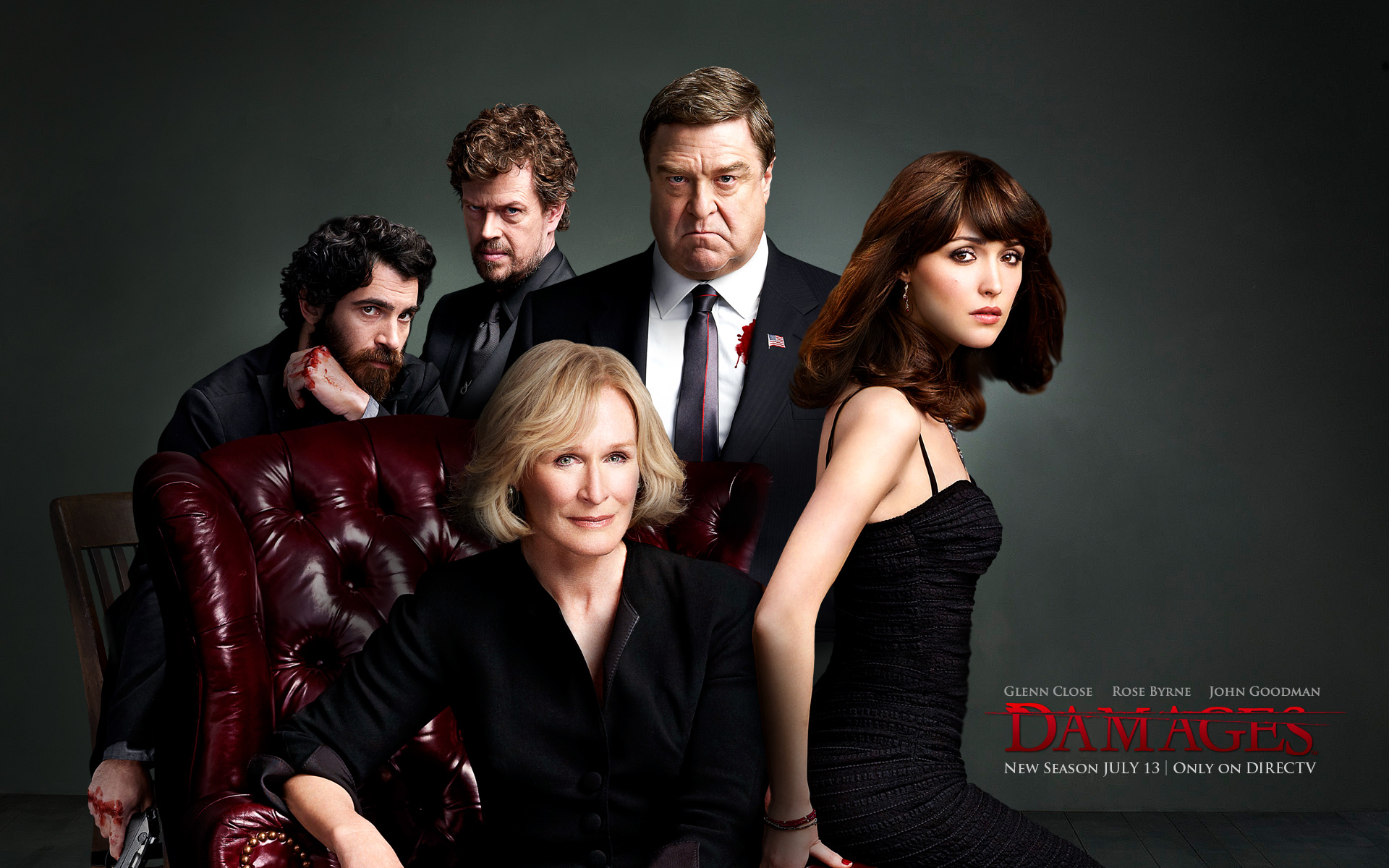 When I wrote about representations of religious characters on American TV drama in the years after 9/11, the narratives I encountered most often featured explicit and often violent conflicts between races and cultures1. Sometimes, as on Battlestar Galactica (SyFy 2003-2009) bloody battles highlighted the arbitrariness, racism, and ultimate futility of the real world wars they were allegorizing. Sometimes, as on Sleeper Cell (Showtime, 2005-06) they tried, using stories about terrorists, to educate viewers about Islam and diversity within the Muslim American community. Even when the conflicts were not violent, as on Friday Night Lights (NBC 2006-08, NBC & DirecTV 2008-11), where religious practice was pictured as part of the show’s documentary realist aesthetic of small town life, it worked as a shorthand to frame divisions between black and white families. Often, these representations seemed purposefully created for white audiences in a predominantly Christian nation to identify with characters performing a lack of prejudice and an understanding of racial and religious complexity. But by foregrounding otherness as a defining factor of religious practice, and violence as a seemingly necessary backdrop for explorations of faith, those post-9/11 representations of religious characters, taken together, tapped into older paradigms of a white Christian nation pitted against dark-skinned Muslim enemies. This essay uses the fourth season of Damages to check in with dramatic TV’s representations of religion a decade later to see how they are shifting toward a slightly different understanding of the US as a Christian nation.

Damages is a heavily serialized legal drama pitting elder stateswoman Patty Hewes against young attorney Ellen Parsons in a battle for personal and professional domination2. Season 4’s (2011) primary legal case is that of Blackwater-esque military contractor HighStar trying via whatever means necessary to cling to its government contracts. This season, shot in New York City, featuring war veterans, Muslim allies and enemies, and various shifty government types, is clearly imbricated in post-9/11 discourses of militarism, nationalism, and violent conflict. But it also seems to be part of a shift toward “religion for liberals” that moves religious representations from the immediately post-9/11 realm of dramatic conflict, violence, and destruction that marked ardent faith as distinctly available only for the reactionary, toward a more intellectual and critically engaged Christianity available for characters across a broader political spectrum. This representational mode does not reach out to Muslims, people of color, or people of other faiths, but works instead to rescue the dominant white Christianity from the relative isolation of its links to arch-conservatism, creating a slightly more inclusive and thus reinforced image of the dominant. Damages’ fourth season illustrates a sort of bridge between these representational modes. 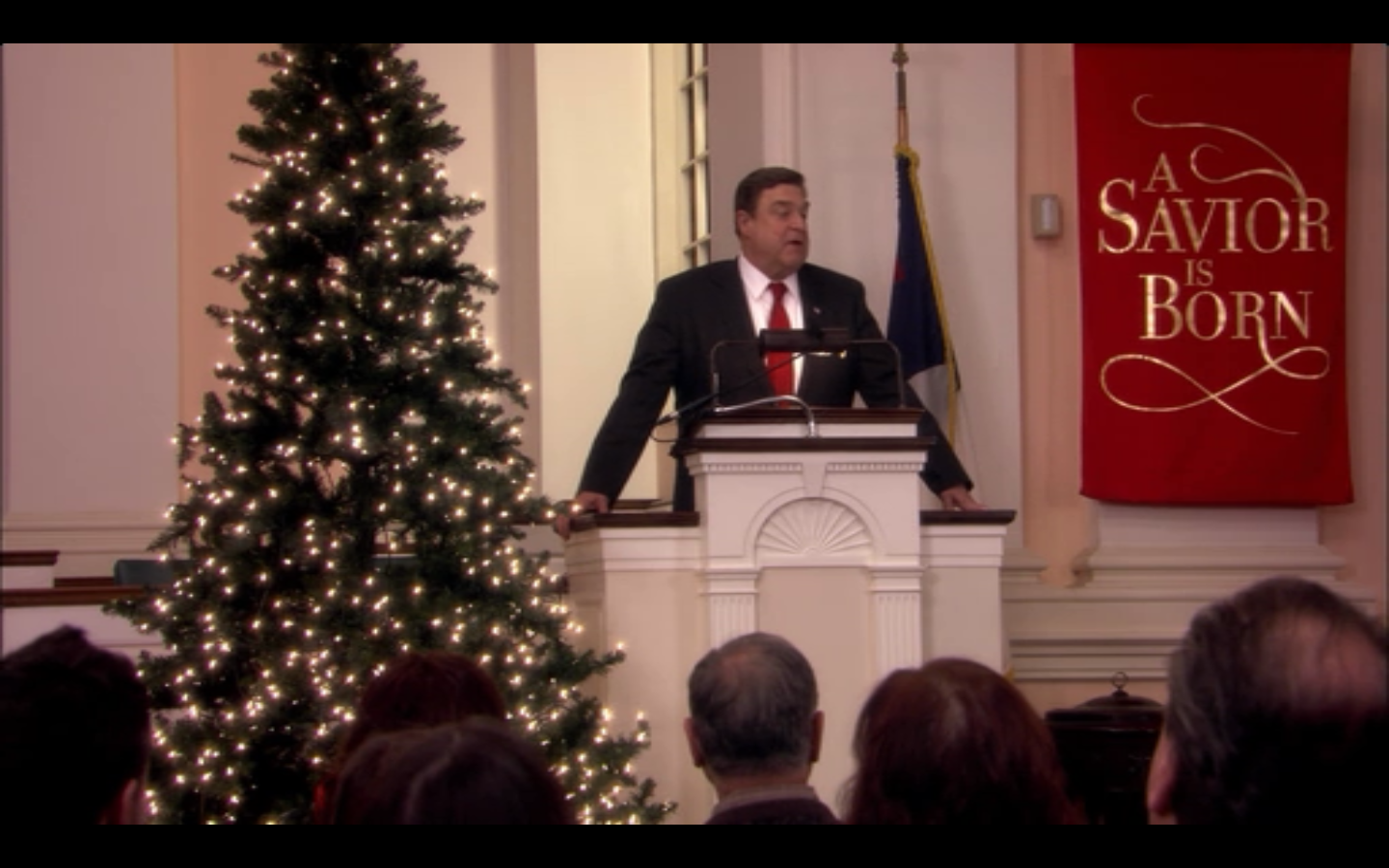 Goodman at the Pulpit

Howard T. Erickson, as seen above played by John Goodman, is the CEO of HighStar. On the one hand, Erickson’s faith works in the post-9/11 mode alongside his charm, slight Southern accent, and former military service, as a quick indicator that his character is a conservative Republican political operator. When his pastor asks him to deliver a Christmas Eve homily, that faith is linked explicitly to illegal, violent, military action. Erickson chooses Matthew 5:9: “Blessed are the peacemakers, for they shall be called the children of God” as the text on which to base his sermon, and he speaks about the suffering required to win lasting peace, comparing Jesus’s suffering through the crucifixion and the resultant salvation of humanity to the inevitable but necessary suffering of wartime in order to win lasting peace. 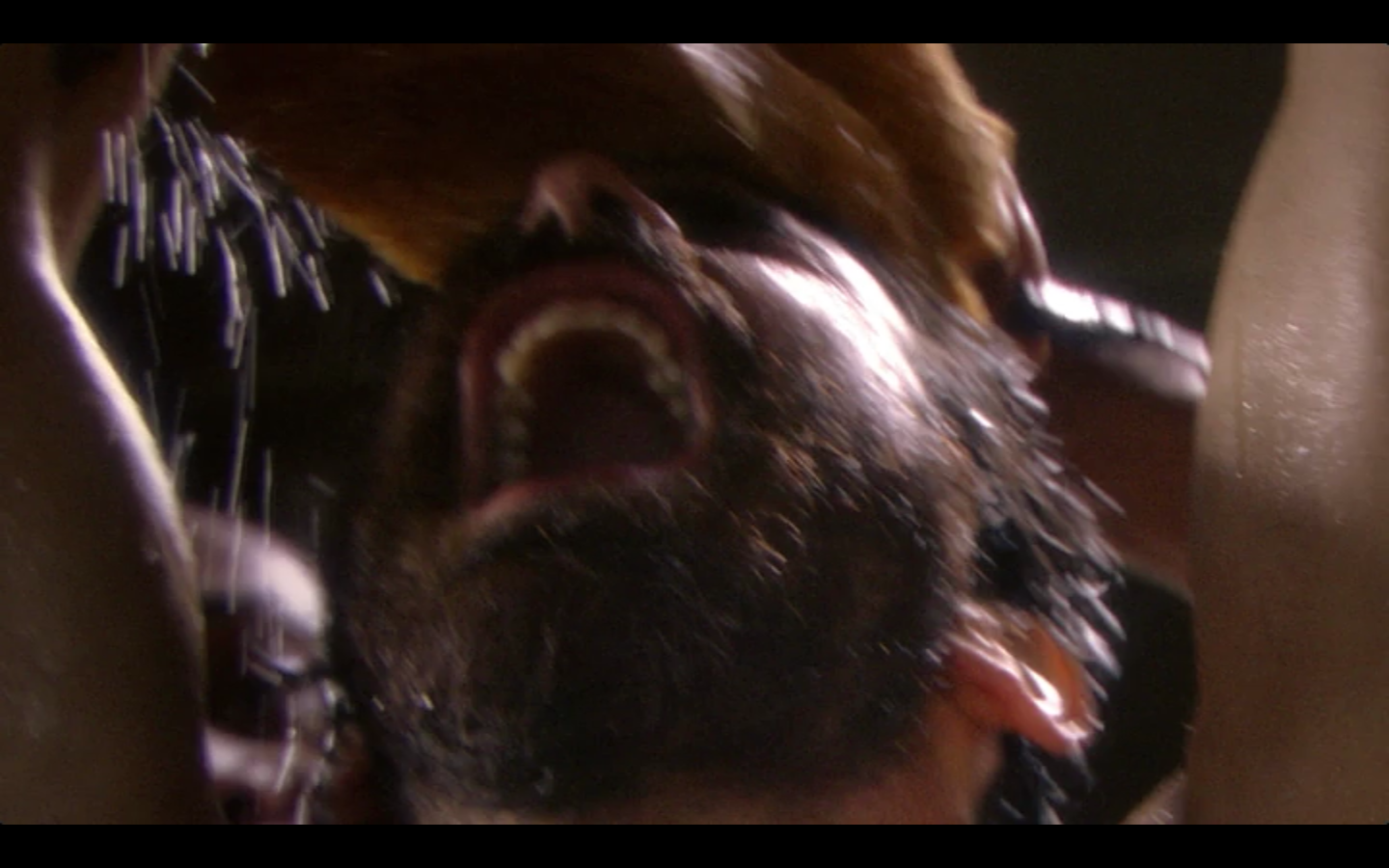 This scene3 is intercut with images of an American HighStar employee being tortured on Erickson’s orders. Erickson’s speech remains uninterrupted over the visual cuts unifying the two spaces despite radical differences in content, framing, and editing. The sequence indelibly connects Erickson’s desire to cultivate peace with his practice of endorsing torture, and the utter difference in style from church to torture room highlights his sermon’s ultimate and hypocrisy.

On the other hand, Erickson is seen to struggle with his faith, to engage with it critically and intellectually even as he mobilizes it as a tool to justify his decisions as the CEO of a military contractor. Essentially, we also see Erickson mobilize his faith as a parenting guide for raising his 3 sons. As Erickson begins his Christmas speech, his young boys smile up at their father from the front pew, relishing his mention of a Christmas card one of them made and reassuring their nervous dad in return. It is through his loving fatherhood and his need for validation from his pastor that Erickson begins to demonstrate an evolving mode of religious representation. In this mode, religious belief and practice is used not as shorthand character exposition, but as a way to humanize a supposed villain. Not every character is allowed access to multiple valences of religious representation. Erickson is allowed them at least in part because he is white and male. The keys to this mode are a lack of absolute certainty, an attitude of intellectual inquiry toward faith, and parenthood.

This link between parenthood and shifting representations of Christianity is even clearer in the character of Patty Hewes. Where Erickson’s military service, faith, and Southern-ness are icons indicating his conservatism, Patty Hewes’s status as calculating, icy villain is built from Glenn Close’s ball-busting star persona and occasionally scenery-chewing performance, as well as from the character’s status as an unloving incompetent Bad Mother. Throughout the series, Hewes’s villainy is heightened by the cold, often antagonistic relationship she has with her son, which eventually results in her adopting his daughter away from him. In season 4, Hewes’ status as Bad Parent is displaced onto her granddaughter, and a key feature of that status is Hewes’s active rejection of religious faith. 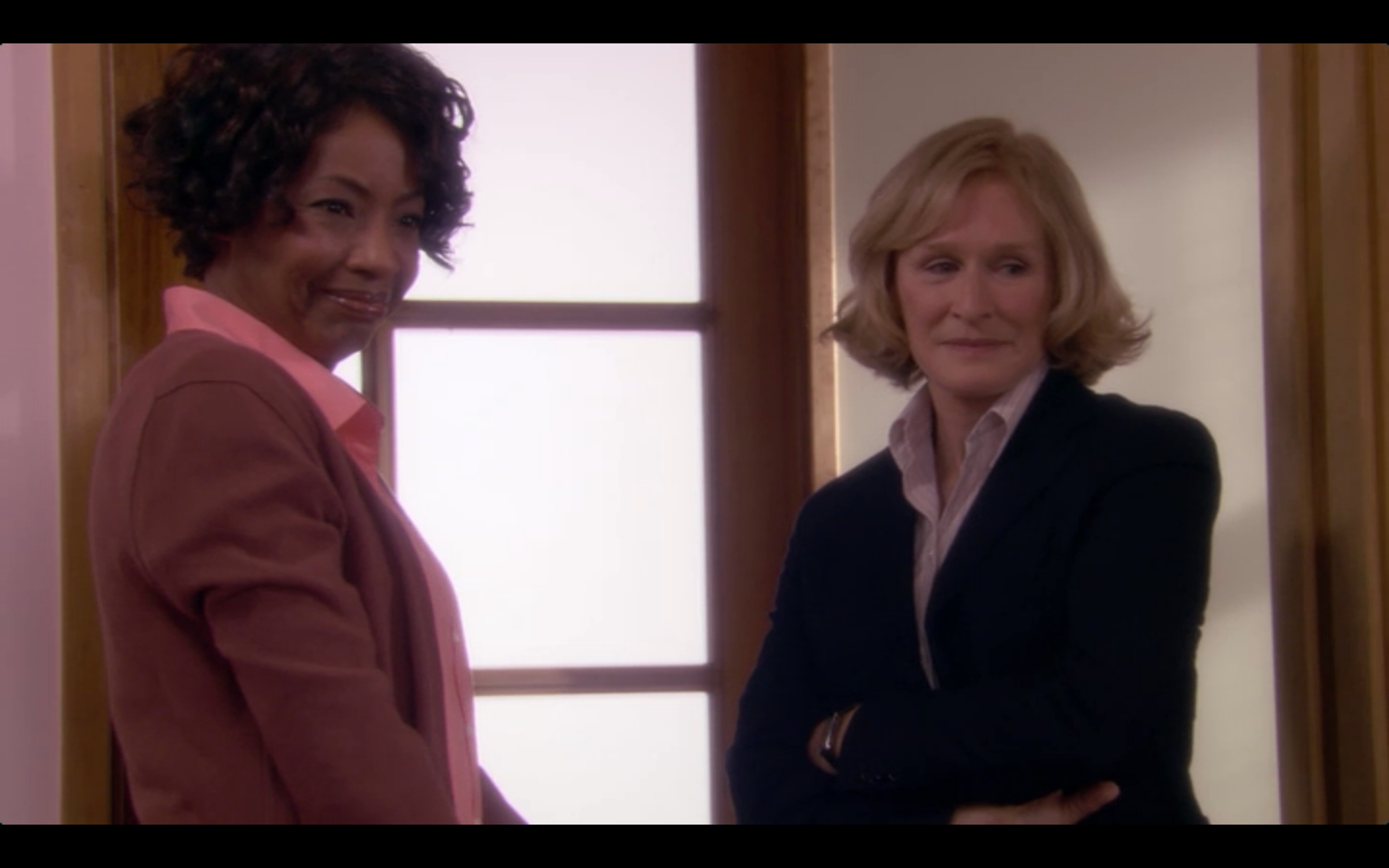 Patty and her nanny, Mrs. Auroro

Most of Hewes’s modernist home is white and gray, with enormous windows and sharp edged furniture. Her domestic space is photographed in cold light and desaturated colors with the exception of Katherine’s warm, soft bedroom filled with lacy pillows, decorated in pinks and greens. In this image, we see Hewes and Katherine’s nanny Mrs. Auroro looking back at Katherine. Hewes’s dark tailored suit, her pursed lips and stern expression recall the colors and lines of the rest of her apartment and serve as a stark contrast to Auroro’s wardrobe of pinks and earth tones, which link her visually to Katherine’s space. When we see this shot of the two women side by side, Auroro has just finished saying a prayer with Katherine. The affectionate smile and loving expression she wears in this image are paired with her religious practice as markers of her ability to love and take care of a child, just as Erickson’s faith is used to characterize him as a good father. In the next scene, Hewes asks Auroro not to pray anymore, saying she “doesn’t want [Katherine] exposed to that,” using the same terms for a religious practice that she might for the flu4. The conflict between Hewes and Auroro over whether or not religious belief and practice are a vital part of parenting continues and escalates over the next several episodes, with Auroro and faith clearly aligned with “good” parenting and Hewes’s lack of faith used to heighten her characterization as a bad parent and a series villain.

Auroro brings faith into Hewes’s cold modernist home, marking spiritual and affective labor as separate from and incompatible with the intellectual labor that brings Hewes professional success. This marks religious belief and caring as either specifically raced, as in this instance, or necessarily politically conservative, as in Erickson’s case. Yet Hewes fits neither category and her failure to engage with religious belief contributes to her monstrosity, or her postfeminist “failure” for not successfully combining parenthood and paid work5. By putting these characterizations of religious belief together, we come away with the impression that a devout yet critically, intellectually engaged, white masculine Christianity is a marker of humanity, and a requirement for good parenting. In contemporary neoliberal, postfeminist America where the nuclear family is the most valued unit of citizenship, this recuperates this particular style of Christian faith from its violent post-9/11 characterization and recasts it as a vital element of full subjectivity.