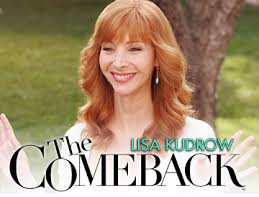 Lisa Kudrow in The Comeback

The Comeback is a half hour long television mockumentary written by and starring Lisa Kudrow. The show is a satire of celebrity reality shows. It follows Kudrow’s character Valerie Cherish of early 90’s primetime television fame. In 2005, Valerie is a struggling actress living with her lawyer husband and precocious step-daughter. The show has a complex structure as it provides the audience a look at the raw footage from a reality series documenting Valerie’s experience starting a primetime television 15 years after her fall from fame. Throughout the series Valerie is the butt of most of the show’s ongoing jokes – as she is unaware that the her documentary series will eventually be released emphasizing her worst, most awkward, and often most intimate moments. Valerie, who is ALWAYS acting, is a decidedly eccentric character – and is thoroughly committed to her comeback, despite nearly every indication that it will not happen. The sneaky, observational style of the mockumentary in conjunction with Kudrow’s skill at providing a character who at times seems completely aware of herself and at others entirely unaware – while staying unwaveringly committed to the illusive goal of a comeback.

One can easily argue that this character is representational of Emily Nussbaum’s definition of a Hummingbird character. Or, at the very least, she is an extremely close ancestor. She can be considered the precursor to Parks and Recreation’s Leslie Knope (Amy Poehler), who Nussbaum suggests is a prime hummingbird candidate in her recent article for The New Yorker entitled “The Hummingbird Theory”. The article is the first to name and begin to define what exactly is the theory. It examines which characters may fall within its range. Knope is an example because of her status as, “an alienating-yet-sympathetic figure whose struggles are taken seriously and considered meaningful”.1 Her analysis of Knope’s character goes a bit further as she suggests that she went from being a protagonist that the show, camera, characters, audience were laughing AT – to her current status as a character who is ultimately central to feminist ideology and resilience. She has become a heroine and her unique, eccentric personality in now endearing. 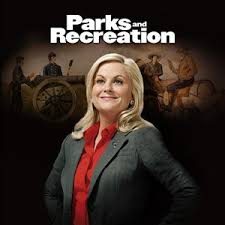 Amy Poehler as Leslie Knope in Parks and Recreation

This may be where Valerie as hummingbird leaves room for debate. Though audiences may learn to love Valerie’s irritatingly awkward personality and her commitment to her goals may be delusionally honorable – this is where things end. Even the last episode goes out of its way to keep Valerie as butt of the joke – as we see Valerie watch the first episode of her primetime documentary series. Since The Comeback only had one season it is hard to sense whether she might have transformed like Knope has throughout subsequent seasons of Parks and Recreation. However, the point of this essay is not to say what might have been, but rather to analyze how the representation of Kudrow’s Valerie supports her integration in the hummingbird family. Mirror moments in The Comeback strike to the core of traits that Nussbaum has suggested represent hummingbird characters, which can be of varying ages. According to Nussbaum, “They’re idealistic feminine dreamers whose personalities are irritants. They are not merely spunky, but downright obsessive. And most crucially, these are not minor characters”.2 In Valerie’s mirror moments we can closely examine these traits. 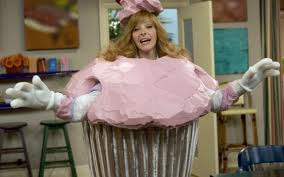 Lisa Kudrow dressed as a cupcake on The Comeback

In the episode of The Comeback called “Valerie Triumphs at the Upfronts”, Valerie ventures to New York with the cast of her new television series for a promotional event called The Upfronts. At this event Valerie and her castmates are introduced to business and media elite before the new television season begins. It is a traditional part of work year for TV stars and executives – and, of course, Valerie takes them more seriously than anyone.

This episode surrounds Kudrow with mirrors. Mirrors are used to emphasize Valerie’s insecurity. For each of these moments, the audience gets a sustained visual of Valerie’s perspective of herself (or lack of) ; meaning, it becomes clear in these shots that she is constantly lying to herself in order to maintain her outward demeanor. This may be the root of the painful, awkward nature of the show. Allowing the audience to understand where the inherent awkwardness of the show comes from may have been a tactic that the writers (including Kudrow) used keep the audience from feeling too embarrassed and disconnecting from the characters, especially Valerie who often alienates herself. In “Valerie Triumphs at the Upfronts” several moments urge the audience to reconsider how well they know Valerie Cherish. The question arises as to whether the tension in the show stems from Valerie’s inherent ignorance or if she sees but does not care that others find her drive and commitment to be flaws, despite her obvious insecurities.

Valerie’s avoidance of mirrors is an important repeated image in this episode and supports the suggestion that she is a hummingbird (or at least a precursor). The director of this particular episode wanted to emphasize just such non-mirror moments in an effort to convey Valerie’s blatant avoidance of herself. For someone who seems caught up in her own image, in “Valerie Triumphs at the Upfronts”, Valerie does everything to keep from making eye contact with the mirror. Since there are mirrors in almost every scene of this episode, this makes for a lot of on camera time spent avoiding herself in the mirror.

Before Valerie leaves to go to New York in “Valerie Triumphs…”, she brings her castmates a small surprise – four promotional photos from each year she starred in the 90’s sitcom I’m It. Valerie looks great in the picture and soaks up everyone’s attention when she reveals it. She tries to make the statement that its fun to see the pictures, because “They really show you how a show can change over the years”. One of her young male castmates sarcastically asks, “What’s the difference?” to which she responds that her hair has changed.3 This moment shows exactly how others see Valerie – as out of touch with reality. It is only through other moments in the show that we are able to see that there is more complexity to Valerie’s position. In this particular scene Valerie is being shot from behind as she sits at a room filled with vanities and mirrors for hair and makeup changes on set. While she holds her four promo images out for her castmates to see there is a wall of mirrors and lights in front of her. Despite the fact that she’s sitting directly in front of mirrors and is being framed from an angle directly facing the mirror, there is never a moment when she looks into the mirror. Thus, while Valerie avoids looking at her own mirror image, she’s gazing with pride at a reflection of herself 15 years previously. She considers these photos to be a reflection of herself, rather than the mirror that is in front of her. She desires the photos to be her mirror image, rather than the reality. If it were up to her, she’d still be on I’m It. 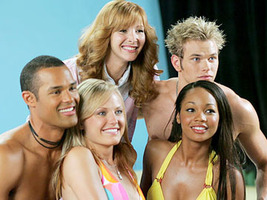 Her commitment to the idea of recreating a past reality becomes clear in this scene. It is her commitment to this possibility of renewed stardom that inspires all of her actions. This is a main trait of a hummingbird – often goal oriented to a point of distorted reality – whether in an inspirational tone like Knope or through the delusions of mental illness like Laura Dern’s character Amy in Enlightened or Claire Danes’ Carrie on Homeland. While Valerie may not be diagnosed, she certainly is not inspirational in her actions.

Instead, her distorted reality leads to awkwardness and tension consistently throughout the episode and the entire storyline of the show. Valerie knows that the only way she can continue pursuing her dreams is to avoid having to face the truth. For her, the mirror is the greatest indicator of truth, thus she avoids it completely. By never looking in the mirror she never can over-identify with her image and thus breaks down the communication barrier in her mind. Kudrow in her performance and writing have made it clear that Valerie Cherish knows the capabilities of mirror image of self, but does not want the new self-knowledge that it can provide. Valerie thinks that ignorance is bliss and intends to keep herself in the dark. Throughout this episode of The Comeback and throughout the show as a whole Valerie shows true commitment to her goal: becoming a worthwhile star again and it is through her hummingbird behaviors in front of and away from mirrors that this becomes clear.