Public Service for Whom? Teen Pregnancy on Television and Beyond
Lauren Weinzimmer / University of Texas – Austin 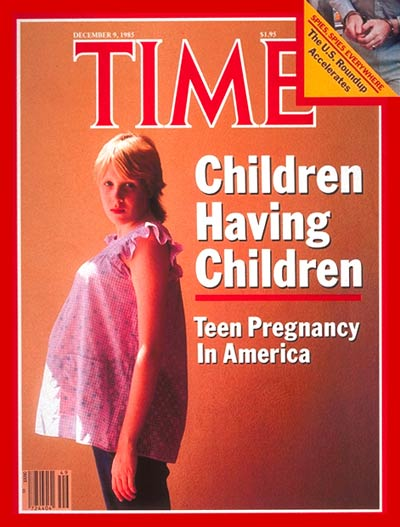 Depictions of teen pregnancy have become increasingly prolific in recent years. While the augmented attention to this longstanding cultural taboo has been witnessed across many media outlets, it was and remains especially pronounced on “non-fiction” television programming. In addition to news coverage (tabloid and more reputable sources) of Bristol Palin’s pregnancy during the 2008 Presidential Election, many scripted and reality television shows revolving around the issue of teen pregnancy have filled the airwaves since the mid-2000’s. These include MTV’s 16 and Pregnant (2009-), Teen Mom (2009-2012), Teen Mom 2 (2011-), and forthcoming Teen Mom 3 (2013-); Logo TV’s The Baby Wait (2012); ABC Family’s The Secret Life of the American Teenager (2008-2013); Lifetime’s made-for-television movie The Pregnancy Pact (2010); and many more. While not televisual, Juno (2007) is important to note as it was released during the prescribed time period.

What is perhaps ironic about the surge in programming centered on teen pregnancy is the fact that the teen pregnancy rate in the United States, while the highest in any industrialized nation, “has consistently declined over the past 20 years, except for a small spike from 2005 to 2007.”1 Additionally, these depictions of teen pregnancy overwhelmingly, though not exclusively, focus on experiences of Caucasian girls while teen pregnancy rates amongst minority populations are pronouncedly higher.

In this piece, I do not intend to point to a causal trigger for this programming, but rather to unpack the context in which many of these programs, particularly MTV’s, have gained extensive popularity and cultural resonance. The actual teen pregnancy rate aside, one cannot ignore the increase in discourses surrounding traditional family values and conservative rhetoric that have fed (or perhaps re-highlighted) the already-existing moral panic surrounding teen pregnancy. 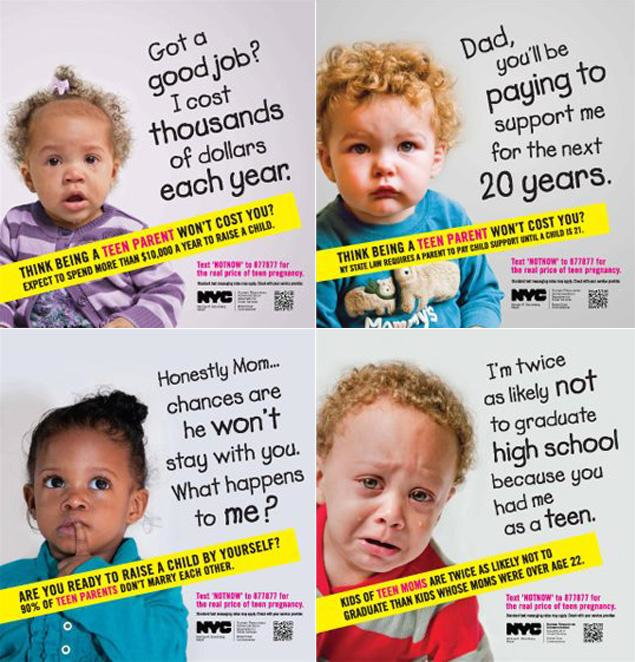 Images from “The Real Cost of Teen Pregnancy” Campaign

In March 2013, New York City launched “The Real Cost of Teen Pregnancy” public health campaign (select advertisements pictured above). These advertisements were designed to play upon the moral panic surrounding teen pregnancy, but also to victimize and further stigmatize this already targeted population. For more about the campaign and how it plays into moral panic and the understanding of teen pregnancy as an “epidemic,” see the article here.

I bring up this campaign because it is framed as being for public service, as are MTV’s reality programs which are linked to the network’s partnership with The Kaiser Family Foundation through the It’s Your (Sex) Life Campaign. While MTV’s docu-dramas 16 and Pregnant, Teen Mom, and Teen Mom 2 communicate a message of pregnancy prevention and advocate for the use of contraceptives, NYC’s billboards more overtly demonize teen mothers. Yet, both play upon normative cultural tropes that denounce teen pregnancy as a form of sexual shaming.

Unlike the still images that compromise NYC’s “The Real Cost of Teen Pregnancy” public service campaign, MTV’s programming follows the lives of teen mothers longitudinally – over many years in the case of those teen mothers featured on Teen Mom and Teen Mom 2. The reality shows are a different incarnation of public service that MTV markets as cautionary tales about the realities of teen pregnancy. While MTV’s programming has been constantly critiqued for its glamorization of teen pregnancy, I want to set that argument aside.

Unlike the victimized still images plastered around New York City, the teen mothers within MTV’s franchise are framed as vehicles for learning for MTV’s young, largely female audience. While I do not discount or deny that MTV’s programs play into the exploitative norms of the reality television genre, including heavy-handed editing and sensationalizing what would otherwise be quite banal events, I find the tension created by the dual pedagogical-exploitative aims to be really intriguing.

I wonder how much of that tension has come from the evolution and explosion of the franchise.16 and Pregnant was intended as a docu-drama that featured the stories of six teen mothers. Teen Mom, Teen Mom 2, and soon-to-air Teen Mom 3 are outgrowths from the success of four seasons of 16 and Pregnant – they demonstrate MTV capitalizing on programming that attracts their target audience and is inexpensive to produce. Yes, these programs are understood crassly as television as birth control and platforms for fame for the teen mothers, yet how much of that is resultant of the extra-textual discourse surrounding the franchise? How much of what we see all over the tabloids about MTV’s teen mothers could have been anticipated in 2009 when the Teen Mom promo above aired? 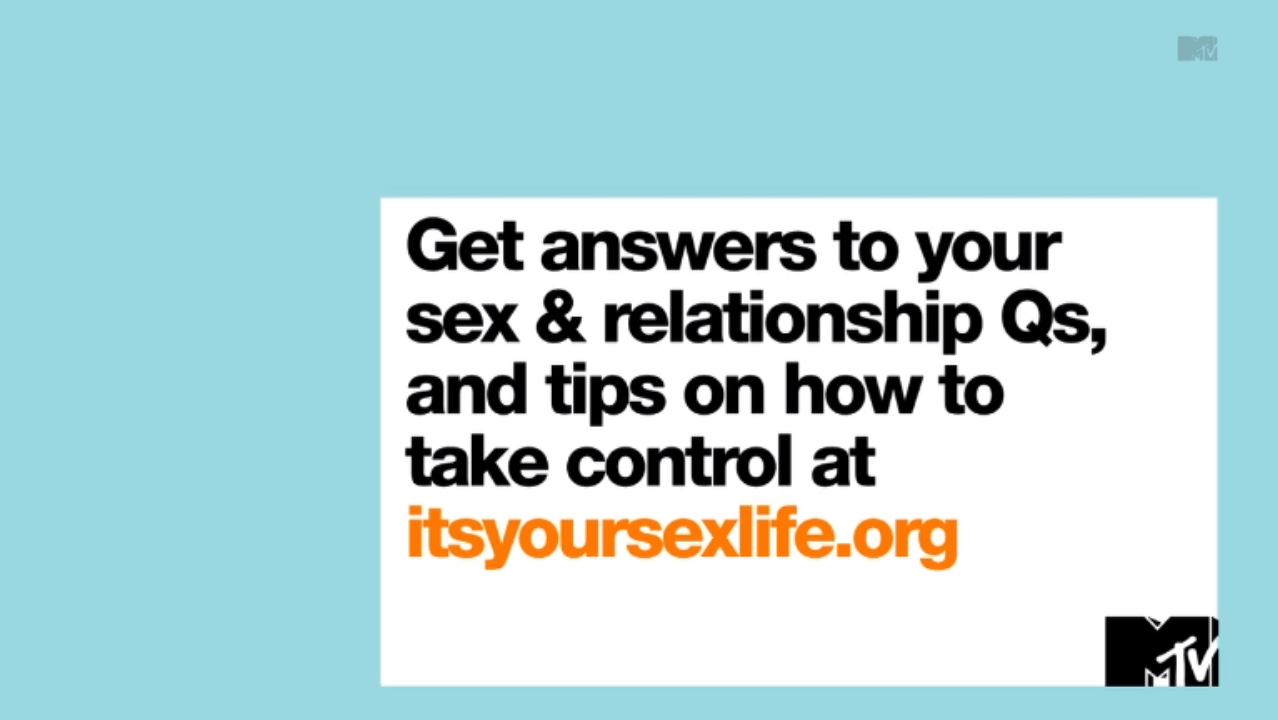 MTV’s programming has public service announcements (PSAs) embedded within shows that already function as cautionary advertisements. Between the commercials and content, MTV places plugs for the It’s Your (Sex) Life Campaign that direct the audience to online resources about pregnancy prevention. Each PSA begins with the assertion, “Teen pregnancy is 100% preventable,” narrated by a female voice. I have always found that statement jarring. Teen pregnancy is only 100% preventable in the context of abstinence. No birth control method is 100% effective. So then, what does this repeated message convey about the less forthright motives and messages coming out of MTV’s franchise?

The more I focus on this statement – teen pregnancy is 100% preventable – the more I have been encouraged to question whether or not the intentions of this message even matter. Am I putting too much stock into the statement? Profit is the ultimate motive for MTV. If their programming turns a profit and is recognized as socially conscious at the same time, the latter is just a bonus. Or is that view too reductive as well? Is this statement a way for MTV to avoid aligning overtly with abstinence-only educational movements?

A provocative element of this statement is that it only focuses on preventing the outcome of teen pregnancy; and this mirrors the “reality” that is shown within MTV’s programs. The goal of these shows is to prevent teen pregnancies from occurring. Any discussion of sexual activity is sidelined. The discourses within the shows and in the PSAs pertain to prevention – contraceptives, safe sexual practices, waiting, etc. Adoption remains a marginal discussion and abortion is rarely mentioned (it only entered the narrative of 16 and Pregnant in Season 3). While positioning their programming as cautionary tales, MTV is actually privileging prevention discourse over showing a holistic (and potentially positive) picture of adolescent sexuality. 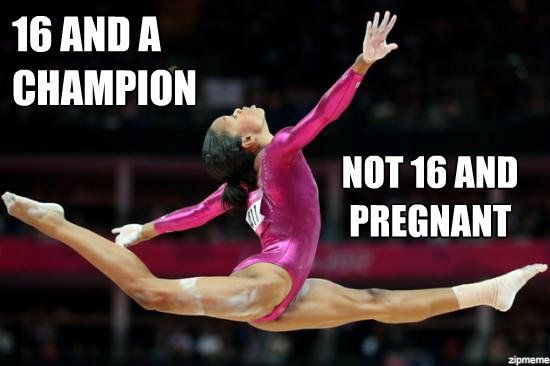 MTV’s programming validates the cultural disapproval of teen pregnancy in part because its framework refuses to address the enjoyable aspects and naturalness of adolescent sexuality. The moral panic is alive and well and the culture of fear surrounding the threat of teen pregnancy remains persistent on television and in American media more generally. So where does that leave MTV’s programming? Given their longevity, can these programs still be seen as cautionary tales? What affect has the fame these teen mothers have garnered in being MTV’s faces of this controversial issue had on the message of prevention?

Some of the teen mothers work to uphold the more pedagogical aspects of MTV’s messaging – Maci and Catelynn, both featured on Teen Mom, use the fame their have acquired as a platform open dialogue about teen pregnancy and pregnancy prevention. Catelynn, the only featured girl on Teen Mom or Teen Mom 2 to give her child up for adoption, has become an informal resource for girls facing the same decision and plans to become an adoption counselor. Yet, she and her longtime boyfriend Tyler are also featured in the current season of VH1’s Couples Therapy. That moves into how MTV’s teen mothers have exploited and profited from their fame (Farrah of Teen Mom and Jenelle of Teen Mom 2 exemplify this behavior).

There is an increasing disconnect between the “reality” of teen pregnancy within MTV’s programming and that which is publicized through popular press outlets like US Weekly and The Huffington Post. Does MTV have a stake in that disjoint? How does it affect their programming and the types of teen mothers that are cast? What happens when teen mothers like Farrah (who made a sex tape earlier this year) and Jenelle (who was arrested for heroin possession) take their fame too far and transgress other cultural taboos? Given the pedagogical and entertainment education roots and original intentions of MTV’s franchise versus the more exploitative (by MTV and the featured teen mothers alike) and profit-driven outcomes, can we argue that MTV’s programs still reflect values of public service for their audience?