In 2010, two articles critical of digital activism appeared: Malcolm Gladwell’s discussion [click here to access] of what he termed “slacktivism” in The New Yorker and Micah White’s article [click here to access] on “clicktivism” in The Guardian. While their focuses were slightly different – Gladwell was discussing social media such as Twitter and Facebook, while White highlighted tactics used by progressive sites Moveon.org and TckTckTck – both argued that activities that consist of “clicking a few links” or sharing them on Facebook are at best ineffective and at worst detract from offline practices that have previously characterized effective social change. These critiques have sparked various responses (e.g. see Silberman, 2011)1, which I cannot completely summarize here. Instead, I want to insert into the discussion the involvement of fandoms in online entertainment polls and consider what this suggests about not just different types of digital participation, but how the social locations of media users inform their engagement. 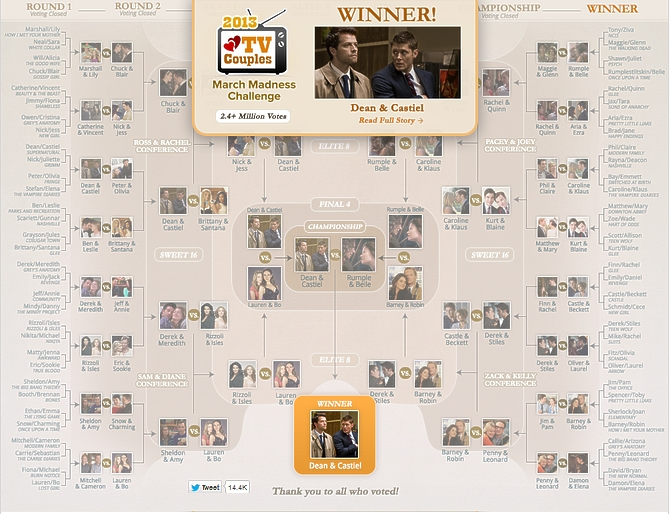 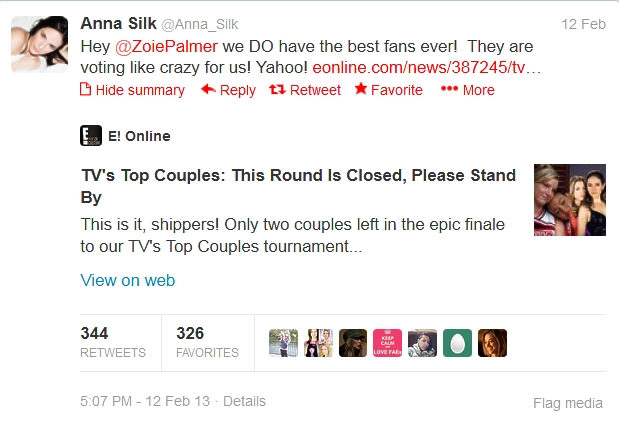 Mainstream media certainly circulate representations that maintain dominant norms, but at critical moments, they have also provided powerful challenges to the status quo. In fact, in his response to Gladwell (2010), Brandzel (2010)2 argued that media visibility was a key component of even pre-Internet movements, including the civil rights protests that Gladwell discussed, by showing viewers elsewhere what is possible. Online polls do not have the same audience and are not intended to incite the same sorts of actions, but when they result in victories unexpected by general audiences, queer fan imaginaries that have been skirting mainstream and margins are become widely visible, if only for a moment.

In an early account of fan activism online, Shefrin (2004)3 framed the emerging dynamics as forms of “participatory fandom,” and Jenkins (2006) significantly expanded the discourses of fan participation. Yet with the tide having turned significantly against “digital optimists” in recent years, Jonathan Sterne’s (2012)4 [click here to access] comments in a Flow article last year are more typical, when he asked whether interactivity is the new passivity:

Coupled with critiques like Gladwell’s (2010) and White’s (2010)5, digital participation seems to have lost much of its lustre amidst exhortations to return to more traditional forms of activism. But missing in these discussions is an acknowledgment of the different social locations of activists, or media users more generally. Though generally unstated – and such unstating reveals the familiar privileged positions of unmarked gender, racial, and class categories – critics of the slacktivist seem to envision white, male-bodied, cis-gendered individuals who are taking the easy way out on their electronic devices rather than doing something more meaningful. 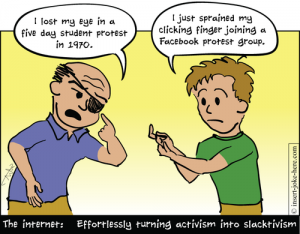 Nevertheless, people with differently embodied identities experience different risks and challenges in physical forms of activism. Scholarship on the Occupy movement, for example, has highlighted the challenges experienced by women (Anonymous, 2012), people of color (e.g. Campbell, 20116; Juris, Ronayne, Shokooh-Valle, & Wengronowitz, 2012)7, trans people (Ng & Toupin, in press)8, as well as those who could not easily set aside work and family commitments for long-term presence at the encampments (Smith & Glidden, 2012). Of course, this has not prevented such participants from being instrumental in Occupy and many offline mobilizations, and not all offline action involves street protest—letter-writing and phone calls have long been considered more effective than emails, for example. However, we should also be careful not to categorically privilege physical presence as if everyone were equally well-positioned to make that choice.

The corollary is not to treat or dismiss all forms of online activism as the same enervated beast. One case of vocabulary slippage occurred in a recent Al Jazeera article [click here to access] critiquing the Kony 2012 campaign, where the author referred to “clicktivism, or internet activism” as if the two were equivalent. Counter to this perspective, John (2010)9 [click here to access] discussed the online-only actions associated with Wikileaks, while others such as Carr (2012)10 [click here to access] and Manilov & James (2010)11 [click here to access] have detailed how social media can be key in bringing about “big change” and not, as Gladwell (2010) argued, generally serve only as a way to disseminate information.