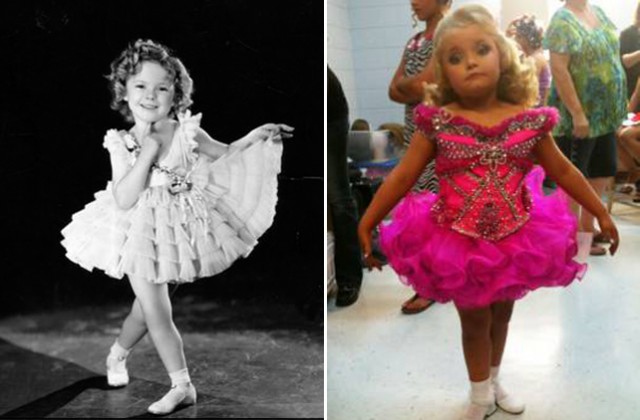 Reality television’s first full-fledged child star has been likened to Shirley Temple, if only to bemoan the differences between the most popular girl of the Great Depression and the most talked-about girl of the Great Recession. An internet meme has emerged whereby bloggers pair photos of Temple with images of Honey Boo Boo (aka Alana Thompson) to highlight Temple’s cuteness and Alana’s freakishness. Alana, whose conversation is punctuated by farts and snotty sneezes, could hardly be more different from Temple.

Golden ringlets aside, Alana Thompson is more similar to another representative of girlhood, Topsy, the incorrigible slave child of minstrelsy. Topsy originated in the pages of Harriet Beecher Stowe’s Uncle Tom’s Cabin, but during the late nineteenth and early twentieth centuries she evolved into one of the most popular characters on the minstrel stage. Like Honey Boo Boo, Topsy was an ungovernable child who invited laughter rather than the caresses commonly elicited by the “cute” little girls of stage and screen. Topsy’s signature tune, “I’s so wicked,” was an up-tempo song in which the slave child described the lengths to which her former mistress went to tame her:

She used to knock me on de floor,
den bang my head agin de door
and tare my hair out by de core,
O! cause I was so wicked!

In Stowe’s novel, Aunt Ophelia successfully reformed Topsy into a good Christian through the administration of loving discipline. However, on the minstrel stage Topsy remained delightfully unreformed.

Indeed, reality television bears some striking resemblances to blackface minstrelsy. I don’t mean to minimize the violence of racial slavery and Jim Crow or to obscure the specificity of blackface. However, a brief comparison of these two forms of entertainment might shed some light on how Here Comes Honey Boo Boo functions within the context of twenty-first century capitalism, particularly insofar as it helps to obscure the violence endured by the subjects it mocks, in this case the violence of poverty.

Minstrelsy, like reality TV, created the illusion that what audiences saw on stage was an authentic representation of African American speech, song, and dance. Before the age of mechanical reproduction, mimicry functioned as a means of reproducing actions across time and space. Similarly, television audiences often forget that the subjects we see on reality shows aren’t the genuine article but facsimiles mediated by recording technology, their behaviors shaped by the prompting of the producers, by editing, and by cinematography and mise-en-scene. This mistaking of the copy for the real thing serves a similar function in both cases, helping audiences to imagine that what they see is not a projection of a society’s pathology but the genuine article. 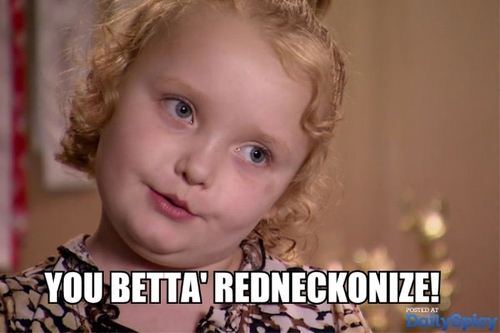 Also like minstrelsy, reality television is built on contradictory responses to its subjects. In Love and Theft, Eric Lott has demonstrated the ways in which antebellum minstrelsy was shaped as much by an anxious desire for blacks as it was an expression of violence toward them.1 Likewise, Here Comes Honey Boo Boo solicits both admiration for and derision of its redneck subjects. While the stereotyped black man has come to signify suffering,2 stereotyped rednecks often function as shorthand for rebelliousness against the restrictive norms of modern capitalism.

Here Comes Honey Boo Boo invites audiences to respond with both admiration for Alana’s family, particularly her mother, Mama June, and with disgust at their behaviors. The show offers an opportunity to celebrate the family’s rebellion against neoliberal capitalism even as it invites audiences to criticize Mama June for her failures as a neoliberal subject. Indeed, Laurie Oullette’s work has established neoliberal critique as an important framework for understanding reality TV.3 For the show’s detractors, Mama June is emblematic of the bad citizen: irresponsible, undisciplined, and complacent. She had her first child at the age of 15, each of her four daughters was fathered by a different man, and she lives on welfare and child support payments. Her corpulence is taken as a sign of her inability to properly care for her own body, let alone for her children. And she lives on the philosophy “it is what it is,” accepting her circumstances rather than working to overcome them as a good neoliberal citizen would.

In contrast, June’s supporters point to the love the family members exhibit toward one another and the fun they all seem to have playing games like “Guess Whose Breath.” Much of the pleasure of Here Comes Honey Boo Boo is derived from witnessing the family’s excesses and their unwillingness to embrace middle-class behaviors or succumb to the dictates of neoliberal citizenship. June has been celebrated for encouraging her daughters to reject an ideal of feminine beauty that would require them to lose weight (“Beauty comes in all sizes”), and self-improvement projects are subject to mockery. For instance, when a woman is brought in to coach Alana on proper etiquette, the etiquette coach is subjected to the girls’ nose blowing and belching. Rather than berate her children for their failure to take these lessons in middle-class deportment seriously, June says into the camera, “She [the etiquette coach] is what we call a square, and we’re . . . like a deformed shape.” 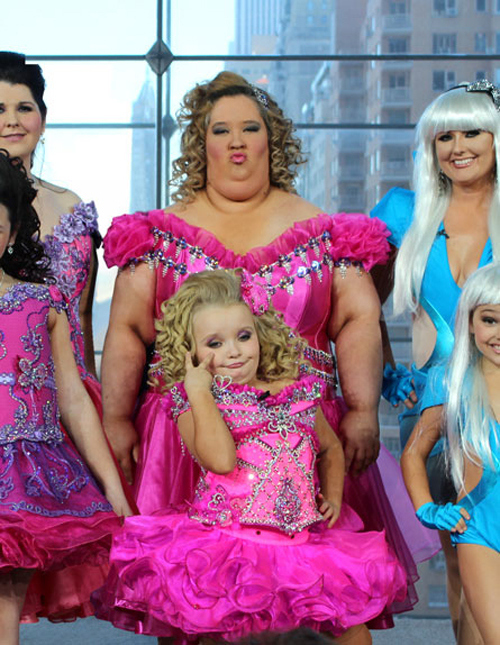 Whether one responds to Honey Boo Boo, Mama June, and their family with admiration or disgust, however, this focus on their personal behavior helps to obscure the larger problem that the show inadvertently exposes: the failures of neoliberal policy, and the violence it enacts on America’s poor. Like a host of other reality shows, Here Comes Honey Boo Boo makes a spectacle of the family’s poverty, encouraging us to respond to their eating habits, for instance, with revulsion. June’s sauce for the children’s favorite meal, “sketti,” consists of a tub of Country Crock butter and several squirts of ketchup heated in the microwave; the family eats generic cheese puffs for breakfast; and Alana is overjoyed by the prospect of “road kill” for dinner.

The show suggests that life below the poverty line isn’t all that bad as long as it’s filled with love. Nonetheless, while June’s resignation to her poverty is celebrated as self acceptance, it’s clear that the family’s health is suffering from poor nutrition, and that their poor nutrition is a result of poverty. June is proud of her ability to feed a family of six on $80 a week (that’s roughly 63 cents a meal, assuming each family member eats three meals a day). And she attributes her aversion to mayonnaise to the fact that she was given mayonnaise sandwiches for breakfast, lunch, and dinner as a child.

When we step out of the framework of discussing Honey Boo Boo’s family in terms of their success or failures as neoliberal citizens, however, Here Comes Honey Boo Boo becomes an object lesson in the correlation between poverty, obesity, and diabetes. The family jokes about what they term June’s “forklift foot,” which was injured by a forklift when she was working in a warehouse. June is loath to show the injury to her family let alone the camera. When she finally does reveal it, the foot doesn’t appear to be badly injured until one notices the bugs flying around it and her children exclaim that it smells bad. Following the lead of June’s daughters, the show frames her foot as an occasion to squeal in disgust, though some viewers have taken the revelation as an opportunity to voice their disapproval of June for not properly regulating her body. Likewise, June’s “bingo face” (her squinting to see the numbers at a bingo game) and her “neck crust” are subjected to the same ridicule, though both are signs of poor nutrition or untreated medical conditions. While the show was on hiatus, Alana’s father, Sugar Bear, was rushed to the emergency room, where doctors diagnosed him with pancreatitis and diabetes. 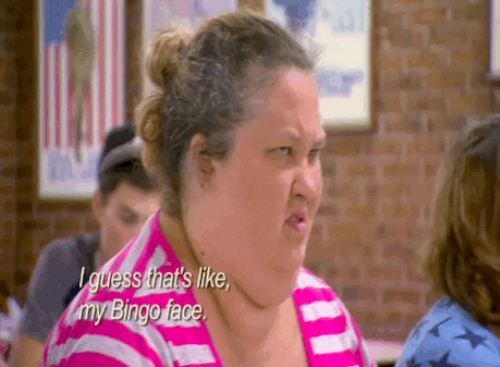 Perhaps this is where Here Comes Honey Boo Boo is most like minstrelsy. At a moment when 22% of American children live below the poverty line, a number that is increasing as programs for childhood education and nutrition dwindle, the show invites us to laugh at and with Honey Boo Boo and her family, foreclosing conversation about how policies shaped by neoliberal capitalism have failed them. Like the slave child Topsy, Honey Boo Boo allows us to reimagine the violence enacted on a class of people as a source of fun.