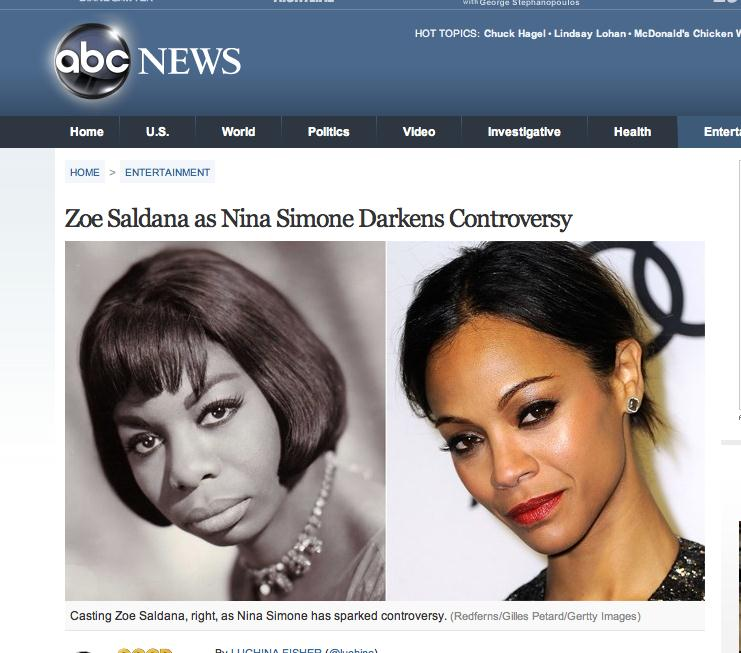 On September 12, 2012 the New York Times featured a story with the following question: “Should Zoe Saldana Play Nina Simone? Some say no.” At the heart of the report was the growing debate and on-line petitions over whether or not US-born black Latina Saldana should play the iconic African American singer, composer and Civil Rights Activist Nina Simone.1

However, underlying the questions and criticism surrounding the casting of Saldana is a complicated and serious set of issues, among them: The racially biased typecasting practices that limits roles for dark-skinned African Americans and Latinas; and, a troublesome commitment to authenticity in casting that reinforces stereotypical notions of ethnicity and race often grounded in biology and skin color. During a “post-racial” moment where race and ethnicity are no longer supposed to matter, the casting politics surrounding black Latina/o actors produce a triple-burden across gender, ethnic, and racial barriers that is increasingly difficult to navigate.2

“Soy una mujer negra” (I am a black woman)3
In an industry where there are few roles for women, fewer roles for African Americans, and even fewer roles for Latinas/os the options are limited. In 2006 the Screen Actors Guild reported that white actors are cast in more than 73% of roles; casting opportunities for ethnic and racial minorities are rare; and casting directors remain resistant to hiring ethnic and racial minorities for characters designated as white: “’Casting directors take into account race and sex in a way that would be blatantly illegal in any other industry,’ said study author Russell Robinson, UCLA acting professor of law.”4 Seven years later the casting environment remains the same. 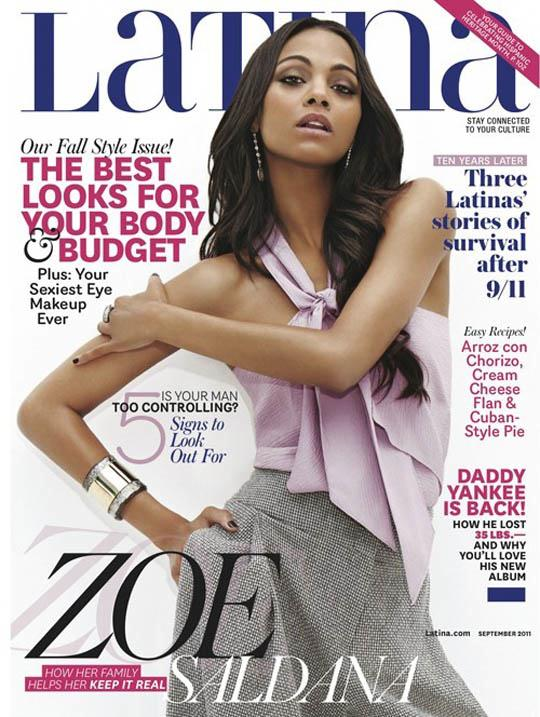 Additionally troublesome for black Latina actresses is an industry that favors light-skinned and white Latina actresses, such as Sofia Vergara or Jennifer Lopez, this also means that she is often considered too dark to be Latina: “[I’ve heard] ‘Oh, you know, you’re just not what we were looking for, your skin is a little darker,'” the New York Daily News quoted her as saying.”5 While the “Latina/o media boom” brought unprecedented visibility to some Latina/o actors, many black Latinas such as Rosario Dawson or Gina Torres were left behind. Speaking in the Mun2 documentary “Black and Latino,” Gina Torres remarked: “ When I became an actress, I quickly realized that the world liked their Latinas to look Italian, not like me and so I wasn’t going up for Latina parts, I was going up for African American parts.”6 For black Latina actresses the roles available to them are often playing black or racially indefinable characters.

Not surprisingly, Saldana has spent a majority of her Hollywood career playing African American characters such as in “Burning Palms” (2010), “Death at a Funeral” (2010) and “Guess Who” (2005). And her big break came in 2009 when Saldana was cast in the role of Neytiri, a fictional ethnic and racial hybrid, in James Cameron’s Avatar and Uhura, a Swahili inspired character in J.J. Abrams Star Trek, originally played in the television series by African American Nichelle Nichols. 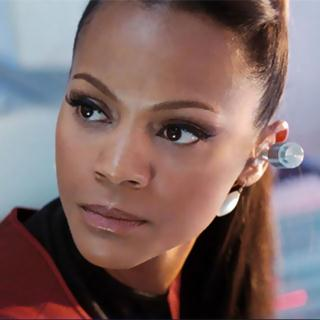 As a US-born black Latina of Puerto Rican and Dominican descent, Saldana navigates an identity that is fluid, complicated and not connected to physical appearance: Saldana, like other black Latinos, is often asked to identify herself by a racial or ethnic label, sometimes being asked to choose between Hispanic roots and black heritage.

When asked by journalists whether she’s Dominican or African-American, Saldana gives this reply: “Yo soy una mujer negra (I am a black woman).” Stating simply in perfect Spanish, “I am a black woman,” Saldana questions the assumption that one has to choose either an ethnicity (Dominican) or race (African American). Instead she stakes a claim to US blackhood through her black Latina identity. Having lived most of her life in New York City, Saldana understands what it means to be labeled, categorized, and discriminated against for being perceived as black.

Yet, Saldana’s response to questions about her identity also critiques the erasure of blackness in Latin American ideologies about racial identity: “Saldana, in a May 2006 interview with Latina magazine that featured her on the cover, said she felt slighted by lighter-skinned Dominicans who thought their blue eyes and fair skin were more attractive than many Dominicans’ dark skin and eyes.” Growing up among Dominicans who valorize blue eyes and light-color skin, Saldana recognizes that to perform blackness and Latinidad is a radical identity.

Problems with Authenticity: Why Aren’t Some Latinas Black Enough
It is Saldana’s complex desire, willingness and ability to occupy and claim a Latina ethnic identity and a US black racial identity that is at center of the discomfort surrounding Saldana’s performance of Simone. In the context of underrepresentation for African American and Latina/o communities and scarce quality casting opportunities for African American and Latina actresses, every role, especially those surrounding beloved and globally popular historical figures is highly contested. Nevertheless, calls for accurate ethnic and racial representations often enter the fraught terrain of authenticity where what one communities considers a positive representation others do not.

In the debate over the casting of Saldana as Simone, no one questions Saldana’s ability as a performer. Instead the focus is on the color of Saldana’s skin and the size of her nose: “’My mother was raised at a time when she was told her nose was too wide, her skin was too dark,’ Ms. Kelly (Simone’s daughter) said in an interview. ‘Appearance-wise this is not the best choice,’ she added, referring to Ms. Saldana.” 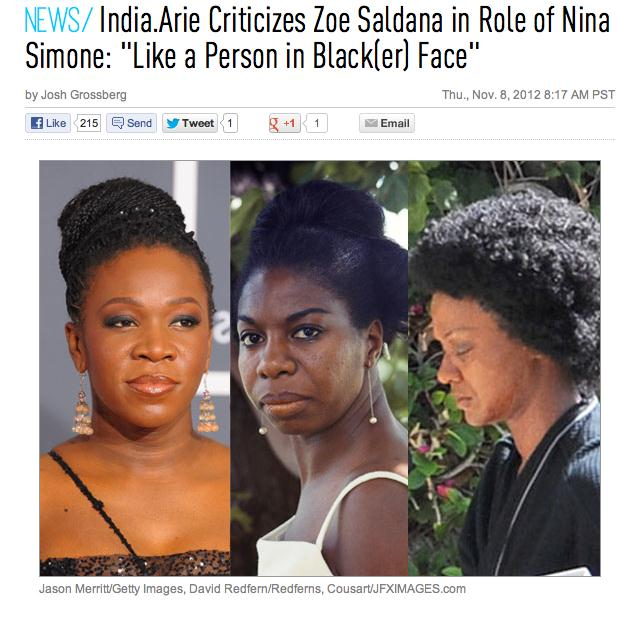 Other cultural critics read the casting of Saldana as part of the industry’s desire for light-skinned African American actresses, such as Halle Berry and Thandie Newton, who are believed to be more palatable to audiences. With an independent movie production of less than $11 million that is certainly a plausible assumption. Nevertheless, for some audiences and cultural activists, cinematic performance of African American identity are informed by popular expectations of authenticity bound with biological notions of race tied to skin color and other phenotypic markers of blackness.

An unspoken element of this debate are the existing and increasing tensions between African American and Latina/o activists and communities. Once close allies during the 1960s and 1970s nationalist struggles for better housing, education and employment in African American and Latina/o urban communities, the past few decades have moved Latinas/os away from blackness towards brownness and implicit privileging of whiteness. Neither white nor black, Latinas/os have pushed for increased access and opportunities as unique outsiders to US racial categories. Consequently, opposition to casting a Latina, whether black or not, in a coveted acting role for a beloved African American cultural figure is not wholly unexpected. 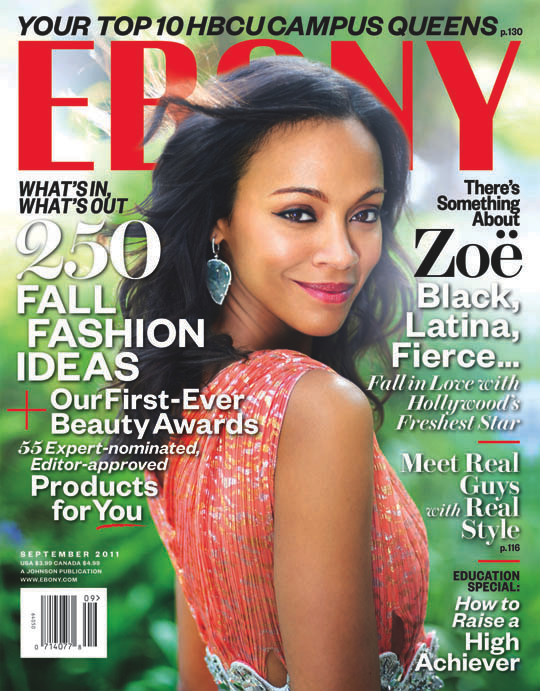 Illustrating a more fluid definition of identity, Saldana is featured on the September 2011 cover of Ebony

Ironically, the same notions of racial authenticity that inform calls for the recasting of Nina Simone also constrain casting directors from hiring ethnic and racial minorities to play roles designated for white characters. The privileging of skin color and phenotypic definitions of authenticity by casting directors limits access to Hollywood roles by ethnic and racial minority actors. And the romanticization of African American authenticity as historically uniform and fixed threatens to erase the complex history of the African diaspora inside and outside of the United States. Through her provocative lyrics about what it meant to be a woman and black as well as her life as an American ex-patriot living in France, Nina Simone herself called into the view the cultural politics of the black Atlantic that extend far beyond the borders of the United States. Similarly the casting of Saldana as Simon reminds audiences that the slave trade occurred throughout all of the Americas and that some African Americans have ethnic identities too.