Banishing Phantoms from the Skin: ‘Vibranxiety’ and the Pathologization of Interfacing
David Parisi / College of Charleston 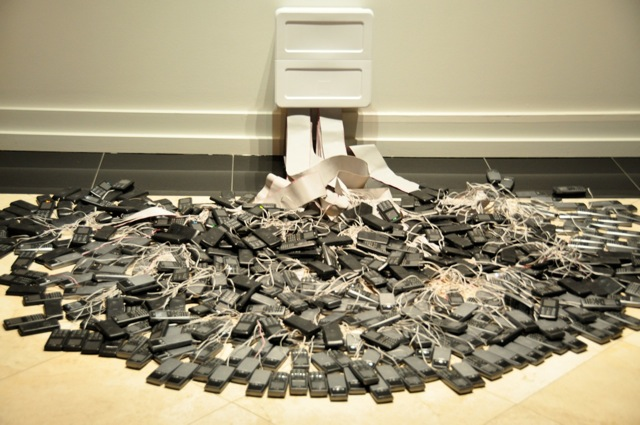 “Have you ever felt your pocket vibrating, but when you grabbed your phone there was neither a call nor any activity that would have made it shake? This is known as phantom vibration syndrome and it is real.”

-Larry Rosen, iDisorder: Understanding Our Obsession with Technology and Overcoming Its Hold on Us2

Capitalizing on the persistent contact between mobile communication devices and the bodies of their operators, designers have long employed vibrational cues, sent to via the skin, as a means of alerting their users to incoming messages. Opening up this communicative channel3 entails cultivating a new receptivity to strategically-generated vibrations, as users learn to attend to a very specific type of interruption in the tactile field. Control over the skinspace is ceded, however intermittently and sporadically, to the device. The brain, in its neuroplastic capacity, begins to treat the vibration-enabled mobile device like an extension of the body; as neuropsychologist William Bar explains: “cell phones enter the neuromatrix of the body—they become appendages.”4 While the connection between device and brain gradually solidifies, it remains necessarily unstable, prone to erroneous judgments and misperceptions. Over the past decade, with the increased proliferation of vibration-enabled mobile communication devices, these misperceptions have grown more common, and the phrase Phantom Vibration Syndrome5 has gradually emerged as a sort of ad-hoc term for designating this fugitive sensation. 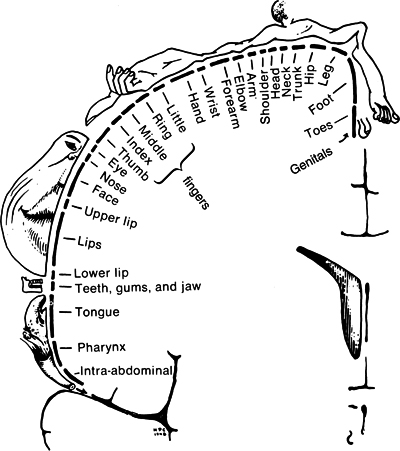 According to the neurophysiologists, the vibration-enabled cell phone gradually becomes incorporated into the brain’s map of the skin.

In this post, I argue that the popular and scientific press adoption of the term encourages users to view phantom vibrations as dangerous and threatening byproducts of interfacing with mobile communication technologies. By borrowing Phantom Limb Syndrome from the phraseology of clinical psychology, the phantom vibrations cell phone users routinely experience acquire a pathologized connotation.

But if we understand PVS as a maladjustment to changing conditions of attentiveness, in continuity with prior dis-orderings of perception, the interface becomes a site of negotiation, where new, normative conditions of sensory attentiveness collide with users’ necessarily unstable and imperfect psychophysical experiences. The pathologization narrative transforms the subject’s occasional inability to accurately perceive vibrational signals into a condition that ought to be rehabilitated, an indicator of a potentially troubled relationship to mobile communication technologies.

According to the scant psychological studies of phantom vibrations, the sensation is widespread among users of mobile communication technologies; a 2012 study of college undergraduates, cited widely in the popular technology press, found that 89% of the 290 student sample experienced phantom vibrations.6 The same study differentiates between two types of phantom sensations. The first occurs when the brain improperly or inaccurately interprets a tactile sensation not caused by the vibrating phone (the feeling of clothing rubbing against the skin, the tactile cacophony of an incoming subway train, or the deep, rumbling bass at a concert). Through a gradual process of sensory conditioning, mobile phone users affix a specific meaning to specific vibration patterns at specific spots on the body. Vibrations therefore become not merely accidental byproducts of the tactile field’s encounter with its environment, but rather “alerts of social communication” attached to their user’s constantly-shifting emotional matrix. In this first type, the term “phantom vibration,” as the study’s lead author Michelle Drouin points out, is a bit of unintentional misdirection; the user experiences a tactile sensation, but fails to correctly perceive its source. By contrast, the second type of phantom vibration involves feeling a vibrating sensation absent any physical trigger, what might more accurately be described as a “tactile hallucination” akin to the Phantom Limb Syndrome that PVS derives its name from.7 Here, the brain conjures sensation where there is none, duping the user into anxiously checking the device’s status. As a sort of tactile wish-image, a host of hopes and fears are projected onto the mentally-generated vibration; the hallucinated sensation can signify either the desire for constant and persistent social contact, or dread and anxiety in anticipation of an incoming message. Phantom vibrations are linked, in this research, to a range of attitudes—neuroticism, extraversion, and conscientiousness—as well as another pathologized relationship to mobile communications known as “Text Message Dependency” (TMD). 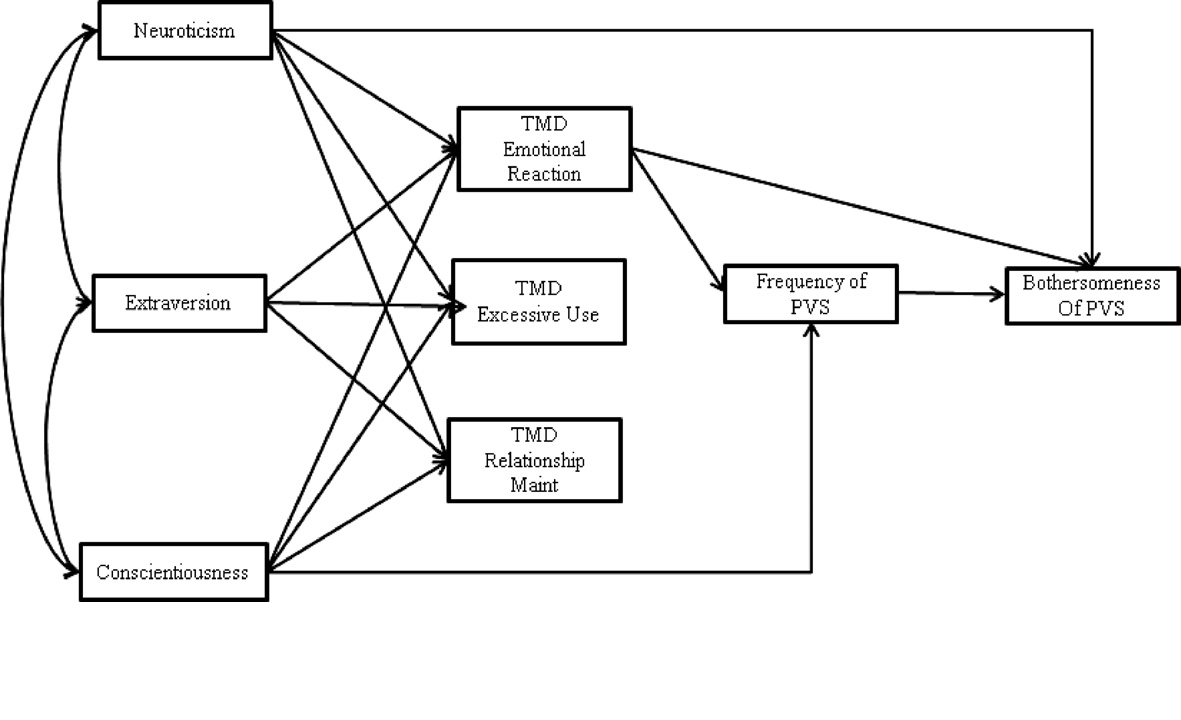 The psychological process of phantom vibrations

For all the smoke here, there appears to be little fire. The findings in both Drouin’s study and the 2010 study by Rothberg et al. imply “that phantom vibrations are neither physically nor psychically bothersome to those who experience them.”8 Drouin speculates that the individuals do not view the imagined sensations as bothersome precisely because they do not interpret them as pathological: “it is likely that individuals consider these phantom vibrations a normal part of the human-mobile phone interactive experience.” (1495; emphasis added) The discursive framing of the sensation, from this perspective, contributes to the way that users read, interpret, and relate to their own perceptual experiences.

Popular press accounts of PVS, however, are sensationalizing the skin’s phantoms. A 2011 article in Fast Company asked readers if they had “fallen victim” to Phantom Vibration Syndrome. Reaching for the phone in the absence of its vibration indicates that one is a slave of both “biology” and “our modern-day dependence on gadgets.” PVS is “more than just a pulsing sensation in the pocket,” and should instead be understood as a indicator that readers “are no longer fully present in the real world.” PVS here indexes a crisis of divided attention that needs to be actively managed and corrected. Similarly, in Rosen’s iDisorder, the experience of phantom vibration suggests a potentially troublesome relationship with mobile communication technology, part of an autodiagnostic checklist designed to help users determine the healthfulness of their relationship to mobile communication technologies. 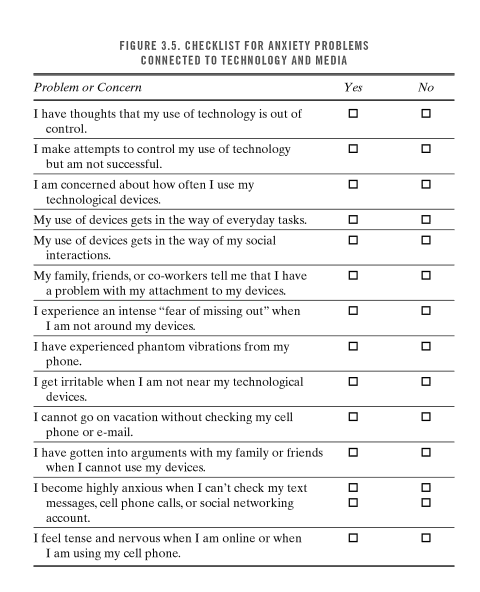 Both examples consciously refer to phantom vibrations using the medicalized acronym PVS. The narrative framing of PVS as a pathological byproduct of increased technological permeation urges mobile device users to view these perceptual curiosities as sensations that need to be managed and avoided. Vibranxiety, a less formal but often-used synonym for PVS, suggests that those experiencing phantom sensations are doing so because they are in a technologically-induced heightened state of excitement. Vibranxiety, from this perspective, serves as a synecdoche for the general condition of pathological overconnectedness— an inability to control the intrusions mobile communication technologies make upon the psychic and physical lives of their users.

The strategy of making this previously-neglected communicative modality serve a role in information processing brings a new vulnerability to the sense of touch. With the tactile channel open and on alert—receptive, anxious, and constantly scanning its domain for a signal—it now must be cared for, managed, and maintained in new ways. The mobile communication device presents its user with a new space where perception may become increasingly unstable, where perceptual processes may begin to initiate themselves even absent the device’s presence. Normative therapeutic narratives in the popular press ask mobile phone users to reframe and reinterpret tactile phantoms, to treat them as sensations that must be banished in the service of maintaining a healthy relationship both to mobile devices and to the social relationships the devices provide access to. As Jonathan Crary explains in Suspensions of Perception,9 changing communication technologies are accompanied by recalibrations in the proper parameters of perceptual attentiveness:

“For every mutation in the construction of attentiveness there are parallel shifts in the shape of inattention, distraction, and states of ‘absentmindedness.’ New thresholds continually emerge at which an institutionally competent attentiveness veers into something vagrant, unfocused, something folded back against itself.”

Though it’s safe to conclude that fears about PVS are overblown, I want to suggest that the recent interest in the phenomena calls attention to the way tactile sensations register the shifting landscape of media communication technologies. This psychophysical relationship to the vibrating device must be actively navigated, a process where users learn to properly distinguish between a ‘real’ alert and an imagined or misperceived one. Phantom vibrations are sensations that ought to be avoided: healthy users cultivate a refined and perfected ability to sense informatic vibrations, accurately distinguishing tactile signal from tactile noise, while refusing to indulge the subconscious temptation to hallucinate touches where there are none. 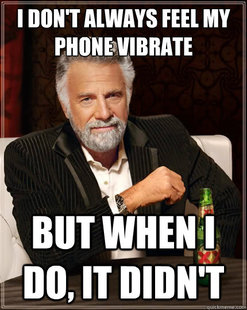