Is it the water, the stones or is it something else?
Richard Ling / University of Copenhagen 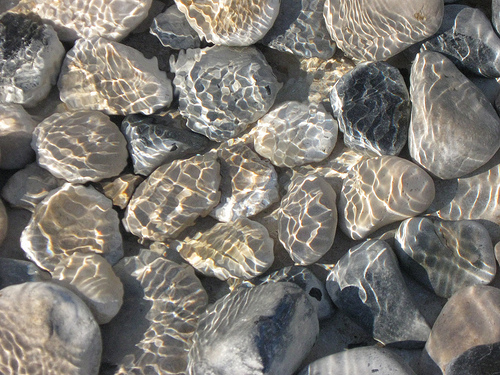 The stones illustrate the technology. The water illustrates the social processes

The title of this journal, i.e. Flow, is fortunate given the metaphor that I will develop in this article. I am interested in addressing the question of whether technology changes society, or is it society that changes technology? This is a question that is at the center of the interaction between social/technical determinism. In the one case, there is the assumption that it is technology that drives social change. Alternatively it is social structures and cultural values that result in one or another technical regimen.

Technical determinism suggests that it is technology that is at the foundation of social structure. There is the sense that changes in technology result in the restructuring of society. An encapsulation of this is attributed to Marx who said something like “The hand-mill gives you society with the feudal lord; the steam-mill society with the industrial capitalist.” In this estimation, it is the technology that is the central driving force in society. Change the technology and changes in society will follow. Obviously, in this age of interaction design and the plasticity of artifacts, this is not a well-received theory. Technological determinism in its extreme form sees technology as being a force that is outside of society.

An alternative position is social determinism. In this estimation, it is society that is in control. It is social processes that result in the development of technologies. There is not a single linear path in the development of technology, but rather it is the result of many different influences, including culture, politics, economic arrangements, regulatory regimes, etc. It is social processes that are integral in adoption. Further, the social processes also are able to take a technology that has been developed and re-work it into a format that is more appropriate for a particular context. The social shaping literature is a part of this tradition including the work on Actor Network Theory.

Society and social processes are vitally important when thinking about how we bring technology into our lives and how we use it. At the same time, technologies do matter. Indeed, there are for example, fundamental reasons why we would never have gotten the current internet out of a steam driven society.

In my musings, as I am entranced by James Creek, I start follow the technical side of the argument. I think about how the stones have gotten into the river. The stones are generally the granite and metamorphic rocks of the Laramite orogeny. There was all the faulting and the erosion that led to the stones ending up in the creek. It is possible to think about the processes by which they have ended up where they are and how they have gained the specific form that they currently have. By the time they have come so far as the stretch of creek in front of our cabin, they worst corners have been knocked off and they generally have a round alluvial shape.

The stones are well settled into the course of the river and the water might go around the edges of the stone, or it might rush over their tops. The water, of course, has a much shorter time cycle. Rather than geological time we are talking about relatively short metrological cycles. The water coming down James Creek is almost exclusively snowmelt that was deposited up on the Continental Divide in the Indian Peaks a few miles to the west. It was transported there by the westerly winds that brought the moisture to Colorado, mostly from the Pacific, and then dropped their load immediately after it had been lifted up to that 13 000 foot ridge. From there, it might percolate underground and eventually come up as a spring that flows into the creek or it might remain as surface water that flows down the valley.

If the stone is technology and the water is the social processes, I become fascinated with the interaction of the two. It is, obviously, in an absolute sense to separate these two since the technology arises out of social processes, but by doing the thought experiment that they are separate, it opens up an interesting issue, namely what happens when the two meet. What happens when the water comes gushing down the creek and past the place where I almost caught that big fish as a 10-year-old? As the water moves past the rock, there is turbulence. It might splash up or it might form eddies in the lee side of the rock.

This is the point. We can study the processes by which the rock got there and we can study the processes by which the water got there. However, it seems to me that the most interesting thing to study is how they interact. That is, the most interesting thing is the turbulence. Indeed this is what is it to study technology and society. It is to examine the interaction between the technology – that got there by one means or another – and its impact on the flux of society.

In some cases, it might be that the formation of the stones is particularly important since it causes whirlpools or waterfalls. In other cases, it is important to study the dynamics of the water since it transports the sand in a particular way or contains particular nutrients that play out in the local ecosystem. In any case, the water works away at the formation of the stones, just as the stones channel and constrain the flow of the water. We need to understand both in order to understand the total. In addition, when we focus on the interaction between the two, when we focus on the turbulence, there is yet another phenomena afoot. Indeed studying the turbulence looks at fluid dynamics that is separate — but indeed overlapping — from the geological and the metrological elements.

As with any metaphor, it is possible to push it too hard. Technology is ultimately a social construction. It is not the result of a separate process, i.e. the geological processes of the stones and the hydrological processes of the water. However, the point remains. As we study technology, we need to be aware of the facticity of the technology. The forms of technology in a society do determine things. We are born into a world with a particular technical structure and we take that into account as we work, study, create families, etc. The social processes are also just as real. Our cultures of use, the way that we engage the technology, regulate and commercialize it have real consequences in social life and in the way that the technology is formed and shaped. In addition, I hope that we also can focus on the way that the meeting between the two changes and shapes both and how it changes and shapes our social interaction.

Image Credits
1. The stones illustrate the technology. The water illustrates the social processes