“A hole new fashion”: The Polo mint campaign in India
Shanti Kumar/University of Texas at Austin

“A hole new fashion.” With these words, the transnational corporation Nestle launched a new line of “designer” Polo mints in the Indian markets in July 2011. To link Polo mints with the glitzy and glamorous world of high fashion, Nestle India partnered with the Goa-based designer Wendell Rodricks who came up with the package designs for four new “signature” flavors – Lime Mojito, Watermelon Sorbet, Peach Schnapps and Cocoa Mocha.

According to a report in the Economic Times , a spokesperson for Nestle India claimed that almost 80 percent of the stock for the “signature” flavors was sold out within a couple of weeks after the launch of the “hole new fashion” ad campaign. Reflecting on the success of the campaign, Rodricks remarked, “This was completely off-the-cuff. But I approached it from a design perspective. These polos look very festive and I have used bright Indian colours such as saffron yellow and rani pink which would instantly catch people’s attention.”1 How Rodricks came up with this “off-the-cuff” idea of creating a designer look for Polo mints is visually documented in the following television ad released by Nestle.

Although many might find the concept of the “hole new fashion” ad campaign funny, few would think that designer labels have anything in common with mass-produced commodities like mint candy. However, Rodricks is no stranger to the strange art of combining the high-end world of fashion with low-end commodities of mass advertising. Crowning him the “the king of collaborations,” the LuxeReport profiles how Rodrick has used his creative skills as a fashion designer to “infuse some life into more utilitarian products.” Among Rodrick’s notable “utilitarian” designs are a signature line of bed linens for Bombay Dyeing, designer uniforms for Goa’s local police, a limited edition of bottles for Himalayan Natural Mineral Water and, of course, the Polo mint campaign.2

In recent years, other top fashion designers like Manish Malhotra, Tarun Tahiliani and Satya Paul have collaborated with makers of big brand names in India to release “limited editions,” “Diwali specials” and “designer collections” that promote everyday consumer products. Satya Paul, for instance, was hired by American Express to design a cruise wear line of clothing called “Jewels of the Sea” for its cardholders who are part of the Platinum Cruise Privileges Programme. In addition, American Express also got other top fashion designers like JJ Valaya, Ritu Kumar, Rohit Bal, Suneet Varma, and Malini Ramani and Tarun Tahiliani, to design twenty five shawls that would be available exclusively for American Express Platinum card members in New Delhi. Tarun Tahiliani also designed a special ATM for Citibank in 2010, and Manish Malhotra created a designer line for crockery maker La Opala, and a special series of Pepsi cans for the Hindu festival of Diwali in 2011.3

As brand consultant Alpana Parida points out, “This kind of a packaging intervention elevates a mass product to a product also for the select, and lifts a brand’s image greatly.”4 For instance, Pepsi’s strategy of “Diwali edition” designer cans in India is not unlike Coca Cola’s collaboration in a different context with Italian designers like Donatella Versace to create a “limited edition” of cans in support of earthquake victims in Italy in 2009. However, Parida argues, international designers like Versace or Tom Ford are not well known in India. On the other hand Indian designers like Manish Malhotra or Wendell Rodrick are better known in India. With the growing integration of media, fashion and consumer culture in the past few decades, Indian fashion designers have gained greater visibility as costume designers for Bollywood heroes and heroines, or for beauty queens in global pageants, and for supermodels in fashion shows.

In a hypermarket cluttered with too many products seeking the consumer’s fleeting attention, association with designers who are identified with big name stars in Bollywood, television and fashion magazines can be a big advantage for low-end consumer products in India. In this context, the “hole new fashion” campaign designed by Rodricks for Nestle particularly stands out in the crowd because unlike all other products which try sell something, Polo mints seek to sell nothing; or more precisely, what Polo wants to sell is not the mint, but the hole in the mint.

In fact, when Polo mints were first launched in India in the summer of 1995, Nestle started with the slogan — “the mint with a hole” – which the company has conventionally used for positioning its uniquely designed mints in the highly competitive global confectionery markets. Unsure of success in the emerging Indian markets in the 1990s, Nestle launched the “mint with a hole” campaign on a very low-budget using hoardings (billboards) in cities and towns. The campaign lacked the glamour, glitz and gloss of television and magazines that is usually associated with giant multinational corporations like Nestle. 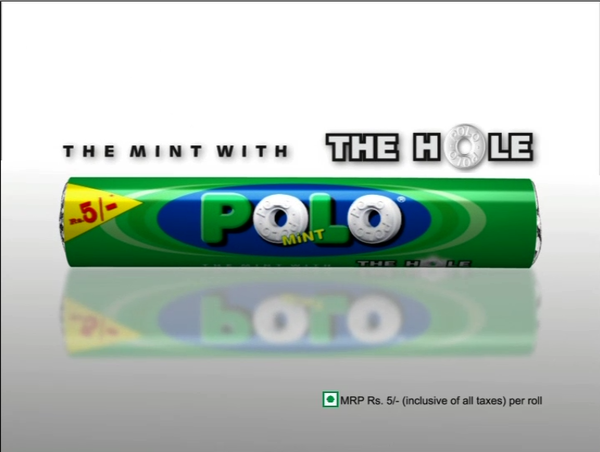 “the mint with the hole”

As Freddy Birdy and Naved Akhtar, the Creative Directors of the first Polo ad campaign in India found out, the mint commodity is a very low-interest product in people’s mind. The only way to promote Polo mints, they realized, was to present it “in such a way that every time you see it, you think of it in a new way.” Beginning with that assumption, they began playing around with several ideas to sell the product. But in the confectionery market crowded with minor variants of a banal commodity like mint, there was very little novelty in the product to “play around” with. Thus, they accepted Nestle’s position that the unique selling proposition of Polo in the mint market had little to do with its being a mint commodity. Instead, its uniqueness was based on the fact that Polo was the only mint with a hole. The task was thus to use the “uniqueness” of the hole imagery to sell the ordinariness of the mint commodity. As Akhtar candidly recalled later in a television interview, “the hole doesn’t do anything to the mint as such.”5 The hole is “just an advertising property of the brand.” Thus, the hole was fashioned as a brand difference to “create some excitement” around the product.

Recognizing the need for continual circulation of new meanings to sustain consumer interest in the imaginary brand distinction promoted by the “mint with a hole” campaign, Akhtar and Birdy decided to “keep doing repetitive advertising throughout the year, rather than have one burst and stop after that.” The idea being, in Akhtar’s words, “every time you see a Polo ad, it is something refreshing, something new.”6 Constrained by the initial low budget of the campaign, and limited by capabilities of initially available media like hoardings, car stickers, and press ads, Akhtar and Birdy decided to create simple, attention-grabbing spots (after the initial success, the campaign was enlarged and extended to television).

In one of the advertisements, Polo mint is stood levitating in thin air with a halo around it, accompanied by the text “Enlightenmint.” In another ad, Polo is elevated to a “Hole of Fame” where its portrait is placed next to global superstars like Marilyn Monroe and Humphry Bogart, with the tune “Unforgettable, that’s what you are…” being played in the background. By cleverly fashioning the imagery of “Enlightenment” and a “Hall of Fame,” the ad creates an artificial class distinction between Polo — the mint with a hole — and all other mints which do not qualify for the higher status of “Enlightenment” and the “Hole of Fame.”

In the 16 years between the award-winning 1995 campaign of “Mint with a hole” and the most recent 2011 campaign of “A hole new fashion,” Polo had a few other less influential ad campaigns. The more notable among them, were campaigns with the taglines “Polo khao, seeti bajao” (Have a Polo, blow a Whistle”), “Beta Sweater Pehno” (Son wear a sweater), and “Looking for the Hole.” When examined “rationally” all the Polo ad campaigns seem outright silly or even nonsensical. But as Birdy remarks, “the nice thing about Polo advertising is that it takes the whole thing as one big joke and the consumer is involved in that joke… he is party to that joke… It is one big mass level joke… The minute it starts taking itself too seriously, it stops being funny.”7

While Birdy may be right in his insistence on a playful reading and his refusal to read the ads “seriously,” he does, however, ignore the central paradox inherent in the mass-level joke. The mass-level joke, as Slavoj Zizek tells us, is serious business. In Zizek’s words, “the comic effect proper occurs when, after the act of unveiling, one confronts the ridicule and nullity of the unveiled content—in contrast to encountering behind the veil the terrifying Thing too traumatic for our gaze. Which is why the ultimate comical effect occurs when, after removing the mask, we confront exactly the same face as that of the mask.”8

Of course, the significance of the “hole” in all the Polo ad campaigns – from “mint with a hole” to the “hole new fashion” — is recognized as “one big mass level joke” which should not be taken seriously. Yet, the very success of the campaign depends on consumers taking the hole in the mint seriously and buying Polo over other brands. But instead of being alienated by the fact the hole does not do anything to alter the taste of the mint, consumers are invited to acknowledge –with a chuckle — the empty promise of the hole as a founding principle of the ad campaign.

However, the fact that the “hole” joke in the Polo campaigns must be taken seriously by consumers for it to work does not indicate ineptitude or “false consciousness” as traditional Marxist ideology critique would have us believe. Rather, it is the consumer’s conscious involvement in the mass-level joke, and not false consciousness that sustains and promotes the seriousness of the ad campaign. As Zizek would say, the hole is “not simply hiding the real state of things; the ideological distortion is written into its very essence.”9 To put it another way, from Zizek’s perspective, “Enlightenment” is not Enlightenment. But consumers are buying into it not because they do not know the truth about the emptiness of the hole imagery in the advertising. They know it, but they are still doing it.