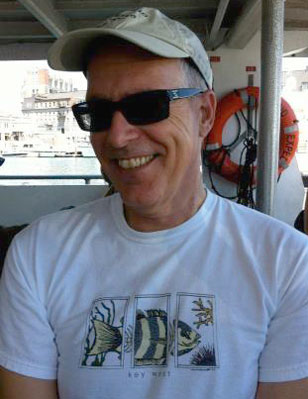 I’ve been asked to write an introduction to Alexander Doty’s series of short essays for FlowTV in order to pay tribute to him, and will simply confess from the outset that an objective account from me is impossible: Alex was a dear friend for over 30 years; we collaborated on one of the first volumes of essays devoted to gay, lesbian and queer criticism of popular culture, and had a lot of fun both in and out of our academic careers. I’m devastated by his senseless, unexpected loss, and don’t really expect to get over his absence from the world: as recent tributes to him demonstrate, I share my grief with hundreds of others, which is some comfort. And of course we all have Alex’s influential, sharp-eyed, and witty work.

Reviewing some of that work, including the FlowTV essays, reminds me that my warning of my lack of objectivity is, in fact, just an assertion of one of Alex’s critical assumptions, a recognition of the necessary subjectivity (by no means the same as unselfconscious egotism or narcissism) of engaged criticism of popular culture. Alex’s queer theory was deeply rooted in feminism, and though the phrase’s fashionable heyday is past, he remained committed to the credo that “the personal is political.” Once Alex came out as gay, he remained proudly and fiercely queer, without apologies. But he had been trained in fairly traditional literary studies, and his decision to write a Ph.D. dissertation in an English department on Alfred Hitchcock was, at the time, a bold break from tradition, although the rise of film studies provided increased institutional support for that early shift in his career.

However, his turn to what he helped to define as queer theory, as well as his turn to television as a subject for queer analysis, represented much more daring and professionally risky moves for a Catholic boy from west Texas. To add even more potential risk, his turn to TV criticism from a queer perspective was rooted not only in the close analysis of texts, but in the phenomenological and cultural act of television viewing, which Alex saw as a deeply personal pleasure as well as a lively social activity. He delighted in the various forms of social exchange that accompanied collective viewing, and even his “private” viewing was animated by discussions with friends and colleagues that made the domestic act of TV watching much like public film going in the classical Hollywood period – an occasion for gossip, commentary, snapshot reviews, and pop connoisseurship. Although the expansion of cable made collecting TV programs nearly impossible, for much of his life Alex pored over TV listings in order to plan the viewing and eventually the almost magical recording of almost any old film, as well as his favorite current and childhood shows.

It doesn’t surprise me that he began his contributions to FlowTV with a retrospective glace that he presents as simultaneously autobiographical, historical, and critical, nor that he attends to details that fill in the television viewing conditions of the cold war American family. For Alex, his retroactive understanding of the implicit queerness in both himself and the mainstream television he consumed as a child is not entirely separable from the memories of the carpet he watched from (with any sweet nostalgia for the era undercut by his eroticizing that viewing position), or the network of desires that were battled in any family in the era of a single television set and only a few broadcast channels. For Alex the experience of the mass media as a general activity was always balanced by the specificity of viewing at a particular place and time, and in particular company, whether among family, friends, or lovers. (In his recent essay on the reception of the stars Greta Garbo and Marlene Dietrich in the 1930s, he writes, referring to Dietrich’s notorious preference for wearing pants, “Leave it to Dietrich to make queerness a matter of commonsense practicality.” I suspect one could replace Dietrich with Doty in that sentence to make the point I’m seeking here.)

Alex’s embrace of the internet was cautious, but I think he jumped at the chance to write an online column on television because it allowed for the currency that the lag time of academic publishing does not: a lot of Alex’s published work on TV was on older shows, which allowed for hindsight: he could consider Lucille Ball’s career in its entirely, for instance, when evaluating her crucial TV series. After his introductory piece his other FlowTV essays are necessarily more tentative, written with him willing to see what happens with a series that is ongoing. And while Alex had the remarkable ability to maintain a comic and even personal voice in work that remained theoretically rigorous, these pieces also feel to me like they are closer to his spoken voice, which demonstrated a quick wit and generosity, even when at its most critical: it’s a shame his writing doesn’t include his frequent laughter or mock outrage, delivered in melodramatic tones. I suspect these essays include views he would have been glad to revise if the creators of the TV shows under discussion had been wise enough to revise their work to meet his expectations. I am terribly sad that we won’t get to see those revisions or the insights that he should have been offering us for many years into the future, but right now any remaining fragments of his sharp, witty, and engaged personality are to be treasured.