Serialization and Genre Expectations: The Case of The Killing
Janet Staiger / University of Texas at Austin 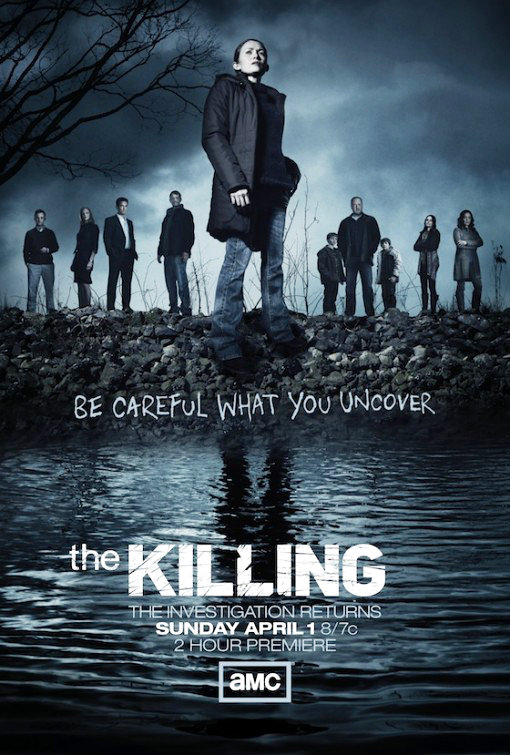 Promotional Image for the second season of The Killing

My experience watching the U.S. version of The Killing (AMC) leads me to ask about the limits of serialization in relation to genre. Specifically, the question is about an average viewer’s ability to retain sufficient narrative information pertinent to engaging with the story when the gaps between the episodes not only are seven days long but when a season break of some ten months occurs. I think I have a fairly normal memory. I do a lot better when I am taking notes on a narrative, but I only do that when I intend to write or teach the story.

For The Killing, the second season immediately launched itself into the story with possible suspect Belko Royce having just shot mayoral candidate Darren Richmond, claiming that he did it (killed Rosie Larsen?) and shooting himself. Meanwhile, detective Sarah Linden has discovered that a photo which seems to suggest that Richmond might have been the killer of Rosie Larsen was faked. What does not occur is any sort of recap of suspects or events. Perhaps this is because The Killing is constructed via throwing out for each episode a red herring which is then discovered to be just that: a false lead.1 So giving us some ten to fifteen false clues from the first season would have been a waste of narrational time. What it does do, however, is suggest that the first thirteen hours of watching The Killing probably does not matter. Indeed, the second season promptly introduces a new set of issues: what was going on at the Casino and Reservation? Who is back-stabbing whom about the waterfront development? Who is Rosie’s biological father (and what does this have to do with anything)? A viewer arriving at the start of the second season probably could have entered the narrative at this point and been as able to solve the crime as the devoted first-season audience member. 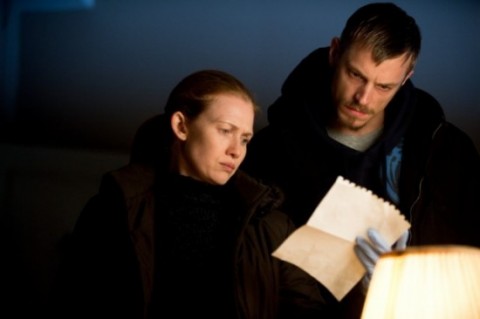 Detectives Linden and Holder continue the investigation in Season 2

Of course, what I am supposing here is that the viewer is trying to handle the story as a classical detective narrative. In a Flow essay published after the first season’s conclusion, Kristen Warner and Lisa Schmidt argue that The Killing might be better considered as a “feminine narrative.” By this phrase, they posit that the “melodramatic emotion” of the series was as satisfying–and for them perhaps more satisfying–as a genre of engagement than the genre of detection. I can certainly appreciate this position. In a paper on the reading demands for Lost, I point out that for that program at least four reading strategies are operating for viewers:

. . . Jason Mittell argues that its pleasure was more than (1) its game strategy (solving the mystery of the island and the chronology of and causes for events); it was (2) an “operational aesthetic” in which viewers engaged with “how” the creators of Lost are authoring such a complex text. The operational aesthetic also had a sort of game aspect to it since the game was played with the creators of the story. Sharon Ross demurs somewhat, suggesting that primary pleasures included speculating about and predicting what would happen with (3) the characters and their relationships, a point backed up by Jonathan Gray and Mittell in a survey of fans . . . . One could also add to this list the pleasures of (4) the science fiction genre, once the program rather explicitly indicated that our characters were not hallucinating before the moment of their death . . . .2

Certainly we recognize that different viewers may be preferring one approach over the other or enjoying several or moving from one to another.

However, my concern here is the memory demands required for engaging with detection versus melodramatic emotion, or perhaps detection and melodramatic emotion. In fact, not only has the temporal gaps in presentation made it difficult to figure out who killed Rosie and why, but a great deal of the emotional pathos of The Killing is lost when viewers cannot recall earlier circumstances alluded to later in the plot. For instance, take one of the first-season scenes that Warner and Schmidt rightfully praise: “Far from being bored, we were engrossed, even deeply moved by the ‘red herring’ dealing with the misidentification of a young Somali teacher Bennet Ahmed as a key suspect. This was a plot arc of several episodes, exploring the ugly but very ordinary racism of nearly every one of the protagonists.”3 Because of the police suspicion directed toward Bennet, Rosie’s father, Stan Larsen, and Belko brutally beat him. Stan is caught and arrested for the assault, based on a confession from Belko. As the second season continues, only one small reference returns to Stan’s pending conviction. Then in the tenth episode of season two, Stan waits at the Ahmeds’ home for their return and tries to apologize for his mistake. The Ahmeds reject him. After Stan leaves, Bennet’s wife notices that Stan has fixed their porch light. Stan’s gesture of contrition–one painfully small given the harm that he has committed–is gigantic in terms of the melodramatic moral about racism.4 But is it lost for many people? 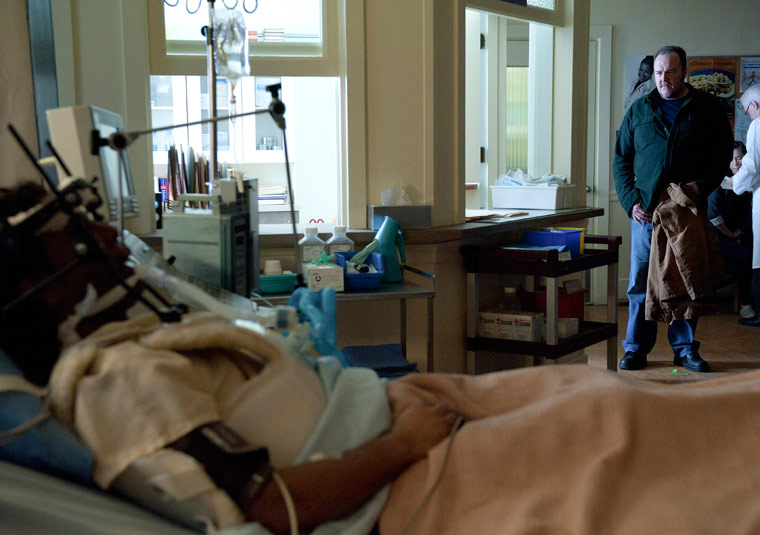 Bennet Ahmed and Stan Larson in a scene from Season 1

Scholars have noted that devoted viewers of soap operas retain information about character relations that may span twenty to thirty years. But I wonder whether remembering who had whose love child years ago is quite the same memory feat as piecing together who could have been where the night of Rosie’s murder. Programs such as The Killing try to solicit viewer involvement in solving the crime: AMC is offering a prize of $10,000 to someone who figures out who is the killer.5 To assist, AMC offers at its website bios of the possible suspects, episode guides, and newsletters. So, if someone wanted to do the work to piece this together, he or she could try–although each new episode is offering additional details that add to and even refute earlier data. So, in some ways, even the most devoted viewer in the classical detective mode probably just needs to give up trying to read the show that way since he/she has little chance of “beating” the narrative. The program 24 has some similarities to The Killing; however, soon into each “day,” the narrative develops a rather straightforward goal with internal deadlines propelling the action. So the “game,” or compositional demand of creating a story from the plot, is much reduced in its memory requirements.

Another solution to the temporal gaps between episodes and the consequent demand on memory is binge viewing: waiting until the program comes out on DVD and watching it in a concentrated form. Still, given the way The Killing is presenting its clues, that would probably not help–although some of the emotional drama may have more resonance. I watched the Danish version of the program on DVD in that concentrated way before beginning to view the U.S. program in “real” time last year. Narrationally, the writers for both versions did the same thing: each episode raised a possible suspect only to eliminate him/her (at least for that proposed reason), with new information ending the episode in cliffhanger mode. So it was as “impossible” to figure out the killer until the last episode in the binge viewing method as it is in the current week-to-week process.

Does this narrational strategy diminish my pleasure? In one way, yes. I like the game classical detective stories offer. As the Ellery Queen mysteries explicitly announce at a reasonable point in the story, the reader has been given all of the clues he/she needs to solve the mystery.6 However, the classical mystery has proliferated into many other generic varieties of investigating crime and attempting to render justice. These variants have different affective requests and rewards. So it must become just a matter of adjusting my expectations to the text and giving up worrying about remembering the clues. The fact is, I will not solve in advance the case of the killing of Rosie Larsen; I will just have to watch the final episode.