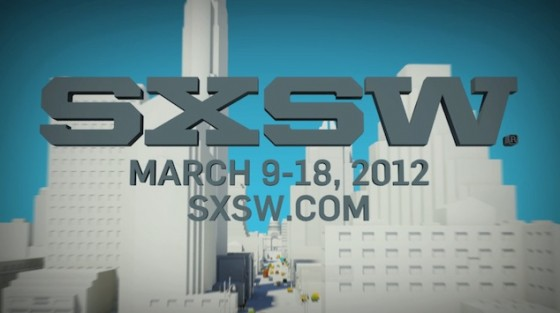 The last few years at South By, I’ve seen many a high, many a low.

I’ve seen a band that only last year were buzz-machine darlings, who last year blew minds right off Maggie Mae’s rooftop, but this year, despite tens of thousands of Facebook ‘friends,’ arrived to no hotel room, to a gig no one knew about nor cared, and played with an ambivalence only the truly jaded know.

I’ve seen, at the Aussie Showcase Dan Brodie say: “This next one’s a love song,” right before singing: “You make me want to kill…again!” This was jarringly juxtaposed with the next act, the spit-shined radio-ready pop and dueling front-man duo of Hungry Kids of Hungary.

I’ve heard the fragile alt-country melodies of Sharon Van Etten get swallowed whole in the cavernous Central Presbyterian Church, and overheard a label rep say: “It’s like listening to music underwater in your bathtub.”

I’ve seen another label rep yelling into an iPhone at a road manager halfway around the world: “You left the lead singer WHERE? At a gas station? In WHAT part of Sweden?!” Then, a couple calls later (one fielded from the Swedish Highway Patrol) say with a shrug: “As long as there’s no dead hookers involved, I’m over the moon!”

I’ve seen 4 guys (Bear’s Den) playing manic power-pop at Klub Krucial, going full-out until all the power goes ‘Poof!’, and….silence. Nothing. Then ‘Poof!’, power’s back up, the boys pick it up mid-song, unfazed. (There’s not a venue in all Austin in which this is unfamiliar).

I’ve seen the very moment a Dutch 3-piece, all-female hard-rocking band named Rebelle was signed as an opening act on a European tour and an Australian festival. The look of long-held dreams made manifest on the faces of 3 lovely meisjes was priceless.

I’ve seen all this year after year while walking mile after mile up and down Dirty Sixth. Yet when I turn to journalism to read about what I’ve seen, what I know happened, the few dreams realized and the many deferred, or even—the music, I find the music writers of the world writing about…well, here’s what:

1) Don’t Write About Music—Write About Crazy Band Names Instead!
This is what the Washington Post did. I kid not. The ‘journalist’ poses the not-even-half-heartedly rhetorical question: “Is this the worst era ever for band names?” and then, most likely sitting in Java-Jive in the Hilton, with no more ‘reporting’ done than flipping to the ‘Artist Index’ of the SXSW Pocket Guide (pgs. 58-91), writes about how many bands have names that contain: Gold, Moon, Ghost, Black, Bear, & etc. The ‘kicker’: “Maybe all the great band names have been taken. There’s a certain ‘it’s-all-been-done-before’ ennui that permeates this crazy information age. And it’s spawned a generation of musicians that sound like they’ve given up and resorted to naming themselves after whatever they see in their living rooms…”1 My assessment: articles like this suggest a certain “it’s-all-been-done-before” blasé pose by music journalists, an ambivalence which prevents them from actually doing their job (i.e., writing about music), leading to a certain ennui in the reading public that might go quite far in explaining why said journalists are a breed facing extinction. 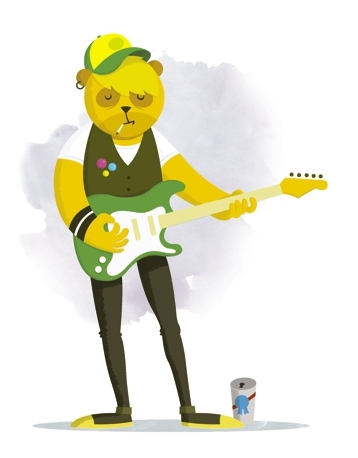 There will be pandas: With thousands of bands headed to Austin for SXSW, let’s hope their music is more inventive than their names. Illustration by Spike Press.

2) Write About How Crazy-Crowded SXSW is!
This no-brainer meme is a favorite to ‘set-the-scene,’ and no SXSW lede is complete without it: “Anyone who has ever been unfortunate enough to attend Mardi Gras in New Orleans will have an idea of what the centre of Austin has been reduced to as SXSW hits its climactic weekend.”2 Or this: “How big is too big? In its 20th anniversary year, there was much talk about how big SXSW has become. There was a lot of griping about the difficulty of getting into some events. It was impossible to get into shows by the Beastie Boys, Morrissey, the Pretenders or this year’s buzz band, the Arctic Monkeys, without getting into line hours ahead of time.”3 My only question: Why would anyone coming to SXSW want to get into the Beastie Boys, Morrissey or the Pretenders? (A: See Meme #5).

3) Write About Corporate Takeover
Even though journalists may be technically correct on this one, does it really bear repeating? Who’s benefitting here? (Hint: free PR, even when written with sarcasm). To wit: “Wow, pop-up gigs have come a long way since the first band decided to, er, pop up and play a gig. Not that I’m implying that this Vaccines show was anything but spontaneous, you understand. Oh no. That a massive AOL Music banner had been erected, live-streaming was in effect and a T-Mobile promotional campaign was underway (more gigs should involve queuing punters being invited to test out the new Galaxy handset – it embodies the very spirit of rock’n’roll) was simply testament to how on-the-ball these company’s can be.”4 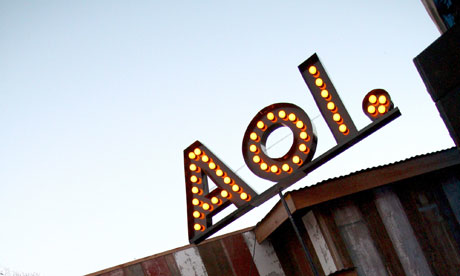 4) Write Only About Bands that Come From Your Part of the World
I understand, I get it, I know: Journos need to fill the ‘proximity’ news value. However, playing this card is as easy as it gets (exception: See Meme #1), and pandering on this one misses two key points: 1) your audience can read about their own local bands the other 51 weeks of the year, and 2) perhaps your audience might like to hear about the other 2,000 bands that they know nothing about? Here’s a quick sample of headlines:
• “A Seattle Writer Encounters Seattle Bands … in Austin” (Seattle Times)
• “The British Labels Making it Big in Austin” (The Guardian)
• “Denver’s Music Scene Making a Splash at SXSW” (Denver Post)
• “Music Acts With State Ties Include Alabama Shakes, G-Side, Pierces, Monarchs” (Birmingham News)
• “Chicago at SXSW: Our Complete Band List, Showcases & More” (Chicago Tribune) 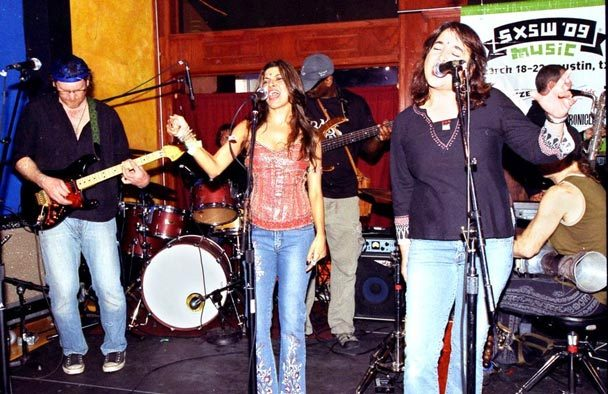 5) Write Only About Established Acts; Ignore the ‘Undiscovered’
This meme can be nicely summed up by this subtlety from Sharon Van Etten, performing at the Swan Dive: “Thank you for not going to see Duran Duran! I love them, but I love you more!” Or, if you prefer cynicism, this, from Rolling Stone: “Thousands of aspiring young musicians migrated to Austin for the annual SXSW festival, but luckily there were some veterans to keep the kids’ egos in check.”5

Really, Rolling Stone? Keeping the ‘kids’ egos in check?’ Because to me, nothing says ‘ego’ more than an established act coming to Austin to siphon off the energy and poach a crowd in order to resuscitate a career that should already have died a natural death.
Again, headline samples best demonstrate this meme:
• Superstars Take Over SXSW (Rolling Stone)
• SXSW Day 2 Brings Stone Temple Pilots, Cheap Trick (Billboard)
• Kanye West’s Not-So-Secret Show Surpasses Expectations (Seattle Times)
• Metallica Sneaks in Set at Musical Festival in Austin (Denver Post)
• Duran Duran Kick Off World Tour With a Bang at SXSW (Spinner) 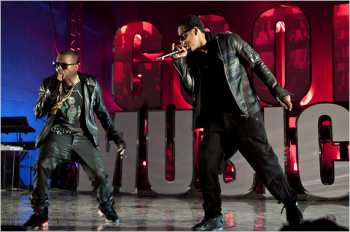 “Kanye West and Jay-Z performing in a late-night show at South by Southwest in Austin, Tex.” Photo: Daniel Boczarski/Getty Images for Vevo

6) When It’s Done Right: It’s the Music, Stupid!
Tempting as it is to fall into the clichés of music writing described above, let’s not claim that Lester Bangs wouldn’t be proud of some current practitioners, especially where the writing is first and foremost about recognizing artistry and craft. And for finding craft in unknown bands from the far corners of the earth, who, for one week converge in and around Dirty Sixth, the folks at the Austin Chronicle are without peer. But we’d expect this of them, it would be downright criminal if they didn’t own this.
Further, the fact that The Guardian comes in a close second in terms of wall-to-wall coverage and giving credit-where-credit-is-due is in itself both a testament to the resources they devote year after year to this event, and an indictment of American journalism, that no major U.S.-based publication even comes close to their music reporting and writing (I’m talking to you, Rolling Stone).
There are, however, individual exceptions, chief among them Jon Pareles at the New York Times, Ricardo Baca at the Denver Post, and Jim Fusilli at the Wall Street Journal, all of them being music journos who can tell an open- from an alternate-tuning. Case in point: this kicker, from WSJ’s Fusilli: “But there were times when SXSW worked as it should. On Wednesday evening, I joined about 30 people in a small club to see Children Collide, a trio from Australia. The one song I’d heard by them prior to SXSW was intriguing—imagine Dick Dale fronting an early Black Sabbath that plays with Sonic Youth’s intensity—but it didn’t prepare me for the explosion of their furious, intricate music. When we met later in the week for coffee, they had a collective cat-that-ate-the-canary twinkle in their eyes. They knew they’d made an impression, they said, and believed their music would determine their destiny. ‘We’re comfortable with what we do on a creative level,’ guitarist Johnny Mackay told me. ‘Something will happen on the professional level.’”6

This is what the SXSW that I’ve seen is all about.

2. There will be pandas