1-2: The Jaguar shark (left) and the undersea community (right)
in The Life Aquatic with Steve Zissou (2004).

The Mediterranean films Respiro (2002) and The Life Aquatic with Steve Zissou (2004) culminate with a movement – of camera, characters, and viewers – under the surface of the ocean. In her essay contrasting the films, Elena Past argues that this cinematic submergence is correlated with a movement past “earthly concerns” into a more inclusive space where characters can commune with aquatic others.1 As the crew descends to find the Jaguar shark, Past notes that they are brought together, beyond their terrestrially based conflicts, and the undersea environment becomes a place where they can consider ecological ethics. In this scene, as they gaze out the submersible’s window, they are united for the first time in a shared vision of the undersea world (Figures 1-2).

This essay tracks the origins of the cinematic framing of undersea environments in order to draw attention to the historical specificity of this view. The Life Aquatic’s framing of underwater space as a de-politicized sphere apart from historical conflict is a trope present across aquatic film and television, from the The Abyss (1989) to the Blue Planet series (2002). In recent films, the movement underwater is often linked with a multiplication or expansion of the frame itself. Aquaria and museums are similarly moving toward large-scale, immersive, and apparently unframed underwater exhibits (Figures 3-4).2 Together, these discursive sites situate the movement underwater as a progression beyond social (and particularly racial) differences and a step towards interconnection with others around the world in preserving the ocean, the common heritage of all mankind.

Here, I chart how early popular underwater film envisioned the ocean, not as a place to escape earthly concerns, but as a territory to be exploited, an area of contestation and battle, and a zone imbricated in the interactions of white explorers with coastal islanders. The sea was not a site to be communed with, but one that was inhabited by racialized (and often dangerous) others. It was not until the 1960s that American film and television “whitewashed” the ocean, erasing indigenous peoples from the narratives and depicting it as a region beyond territorial concerns. It was at this point that the undersea environment became a safe place for a middle class American family to explore and to reconcile their internal differences. 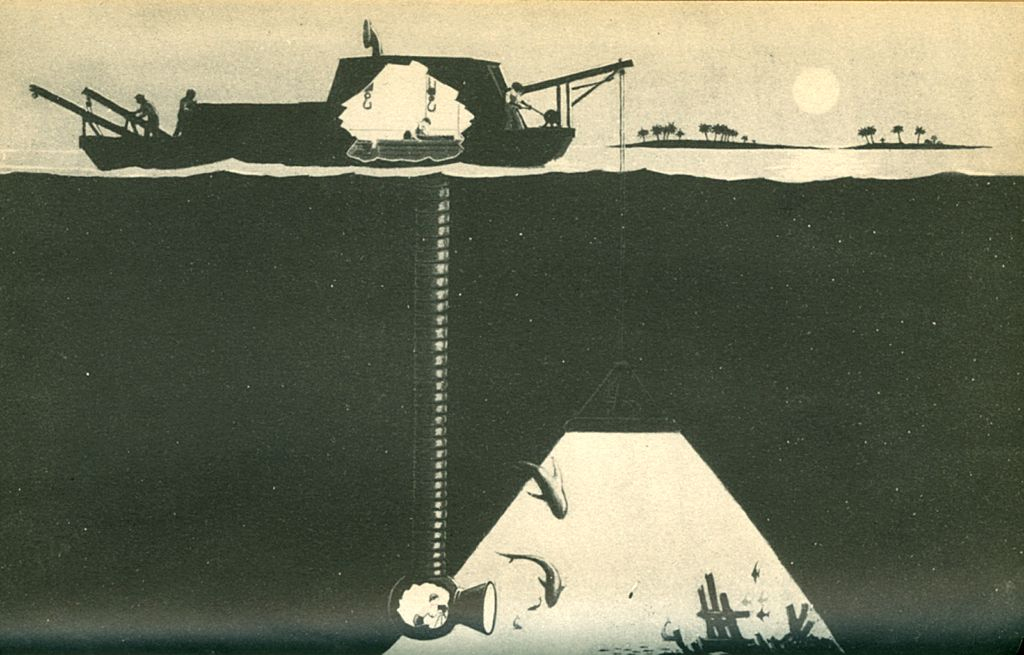 The first popular underwater cinema was produced by the Williamson Brothers between the early 1910s and the 1930s. They developed the “Photosphere,” a submerged tube that extended to the seafloor from a boat, and in which a cameraman could photograph the aquatic landscape through a round glass window (Figure 5). Both underwater and surface shots at times included this round frame, eliciting the perspective of the periscope or the porthole (Figure 6). The films often included reverse shots of onlookers inside the sphere, who would comment on the beauty of the scene via intertitles (and later through voice over). Structured into this view, audiences were encouraged to gaze out onto the seafloor as a foreign terrain, but they nonetheless remained safely distanced from it.

Narratively, the films of this period depicted the undersea landscape as an exotic space navigated by dark-skinned islanders. Islanders both helped to facilitate film production and became some of the films’ main subjects. In the Williamson pictures, they caught fish, battled sharks, and freed (white) helmet divers from the perils of the ocean (Figure 7). Some of these stories, such as 20,000 Leagues under the Sea (1916), went further to portray the ocean as a site where a racialized aquatic other might subvert colonial authority. In this film, true to the Jules Verne story, Captain Nemo is an Indian and his undersea journey is in part an effort to escape British colonization (Figure 8).

6-8: The round frame of early aquatic cinema (left); dark bodies stand out against sandy coastal seas (middle); and Captain Nemo as an exotic, colonial other in
20,000 Leagues under the Sea (1916) (right).

In the post-war era, a new set of narratives emerged that projected the ocean as a space of danger, a site where conflicts played out both between nations and between humans and monsters. There were two distinct cycles of submarine films at the beginning and end of the 1950s (beginning with Mystery Submarine (1950) and extending to Up Periscope (1959)) as well as a cycle of undersea Creature films, including The Beast from 20,000 Fathoms (1953) and Creature From the Black Lagoon (1954). In these narratives, the indigenous people who had formerly helped with the production of undersea cinema were displaced either to the coastline or to the figure of the undersea monster.

Parallel to this narrative shift, a new underwater aesthetic emerged. During World War II, the aqua-lung was developed, a technology that meant that divers were no longer tethered to the surface for air. They could now swim freely into the depths and they took the underwater camera with them. In this process, the cinematic images of the ocean become much more mobile. Cameras moved up and down, from surface to seafloor, and travelled laterally along with the currents. In addition, the underwater scenes often lacked both dialogue and voice over. Instead, intense and overwhelming scores exaggerated the sense of danger in the aquatic environment. In the racially charged stalking scene of Creature From the Black Lagoon (1954), for example, the camera floats around the undersea environment and even adopts the point-of-view of a Creature looking up from the deep. The sound takes on a narrative role and, alongside the mobile framing, heightens our perception of undersea danger. As the underwater cinema of the 1950s “immersed” viewers in the ocean, they brought this audience into a zone of social and territorial struggle, rather than providing an escape from it.

9: Underwater stalking in Creature from the Black Lagoon (1954).

By the 1960s, the undersea monster and submarine warfare cycles had run their course. A new genre of underwater films, ranging from Jacques Cousteau’s documentary World Without Sun (1964) to the underwater domestic comedy Hello Down There (1969), focused on aquanauts in undersea habitats. The seascape was now captured within square windows that resembled the frame of the television screen, and it ceased to be an immersive and threatening space. While there were occasional battles against sea monsters, these were often alien monsters. White explorers were no longer under threat from racialized Others originating in coastal territories, but inhuman ones from distant planets. The coastal islanders that had previously been important to undersea narratives were excluded from the frame. From within the domestic habitat, aquanauts began to look out into the ocean as their own neighborhood, and in many films, characters’ dialogue serves to familiarize the undersea view. As underwater imagery expanded onto television, in shows including Flipper (1964-1967), Voyage to the Bottom of the Sea (1964-68), and The World of Jacques-Yves Cousteau (1966-73), the ocean became a backyard, a site safe for an audience to navigate and explore.

With the transition to a domesticated ocean, undersea film and television sidelined the coastal politics and conflicts that had permeated many of the previous films. Underwater environments became a natural landscape that could be inhabited by an American family. They were no longer the domain of coastal peoples, but a “blank” without history. It is in the undersea film and television of the 1960s that the contemporary view of the ocean originated: a site where we could move beyond social differences and explore our interconnections with others via a shared gaze out onto the subaquatic world.

A longer version of this essay is forthcoming in Ecocinema Theory and Practice (Routledge, 2012). Thanks to Meredith Bak for comments on this version of the article.