The ever-popular superhero genre places importance on differentiating male bodies, emphasizing the dichotomous relationship between the body of the weakling and the body of the superhuman. Whether the body has reached superhuman heights through scientific blunder (The Flash, The Incredible Hulk, Spiderman) or is from another world altogether (Superman, Thor), special attention is given to celebrating the grandiosity of the superhuman body.

Movie-going audiences are familiar with this focus on the champion1 male body, not solely in superhero films, but within the entire action genre; however, a shift in how the male body is represented has taken place in the 21st century. Actors like Michael Cera, Shia LeBeouf, and Jesse Eisenberg became featured in action films (Scott Pilgrim vs. the Universe, Transformers, Zombieland), while more standard action stars like Sylvester Stallone, Bruce Willis, and Jason Statham were swept by the wayside, starring in movies that celebrated the nostalgia of the muscle-bound action star (Rambo, Live Free or Die Hard, The Expendables), and were met with ambivalence. The 21st century shift resulted in the emasculation of the protagonist, relying on the presence of a more understated male body, as well as a more passive demeanor. 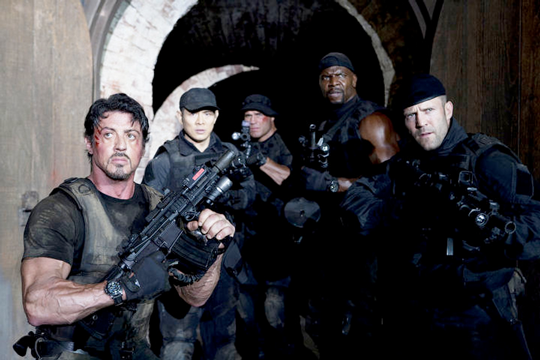 In an interview with the LA Times, Sylvester Stallone lamented the moment when actors of his ilk lost their spotlight. “It was that first Batman movie…The action movies changed radically when it became possible to Velcro your muscles on. It was the beginning of a new era. The visual took over. The special effects became more important than the single person. That was the beginning of the end.” Indeed, stars not necessarily known for their physique began taking on roles that allowed them to perform a heightened physical prowess. For instance, Tobey Maguire’s casting as Peter Parker/Spiderman brought the geek-as-superhero to the forefront, and while Maguire did have to go through considerable training to become Spiderman, there was still a level of visual enhancement — digital and practical . Stallone’s assessment of the bodily shift that occurred in action cinema highlights the importance of technology in recreating the body of the male protagonist. Tobey Maguire’s physique doesn’t need to be built up excessively because the computers can simulate the appearance of a champion body, and his suit can be shaped to provide more muscular contours. Muscles are no longer a prerequisite.

It is appropriate, then, to consider Captain America: The First Avenger as a reversion to an action star with a champion physique, with 21st century nuance. The formula of the superhero film contains the very transformation necessary to perform this “remasculation.” Although described by Details as a male reclamation of “badassness” and “balls,” the term “remasculation” in this context suggests muscles are back, and this time it’s personal. The post-Captain hero will combine the two conflicting masculinities, resulting in a more emotional, less sexually-charged male ego: a hybrid with the body of Stallone and the heartfelt angst of Cera. 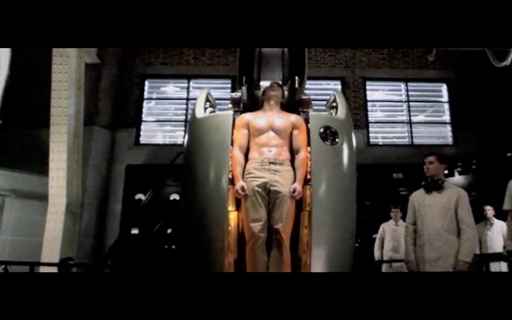 Evans’ transformation is revealed in Captain America: The First Avenger

Starring Chris Evans — an actor previously known for his role as the Human Torch in the Fantastic Four franchise — Captain America is a story about Steve Rogers, a young man who makes up for his lacking size through his strength of will and patriotism. Despite numerous rejections from the US Army, Rogers still attempts to join in on the war effort, even if his body, small and frail, doesn’t fit the standards of the American military. Rogers’ determination ultimately qualifies him to undergo an experimental operation involving a top secret super-serum that should transform his body to that of the ideal American super-soldier: tall, muscular, seemingly indestructible, with perfectly parted hair — though, the hair may or may not have been a result of the experimental serum. Technology transformed Steve Rogers into the captain of America, the very symbol of American masculinity and bodily perfection.

Contrary to Steve Rogers’ minute-long metamorphosis, technology played a very small role in Chris Evans’ actual preparation for the role. Evans underwent substantial training to become Captain America, and technology became important in downsizing his body for the first act of the film. Unlike the stars who used “Velcro,” Evans achieved the champion body through a strict regimen of muscle-building for months before filming, and continued throughout shooting. Much to Stallone’s satisfaction, the muscles became the object of the audience’s gaze. The focus placed on Evans’ body becomes evident through the literal reveal of Steve Rogers’ new, improved body. The subsequent moment when Peggy Carter (Hayley Atwell) touches Rogers’ chest, in what appears to be a reflexive action, further draws in the audience’s gaze — perhaps a visual manifestation of the viewer’s response, male or female. 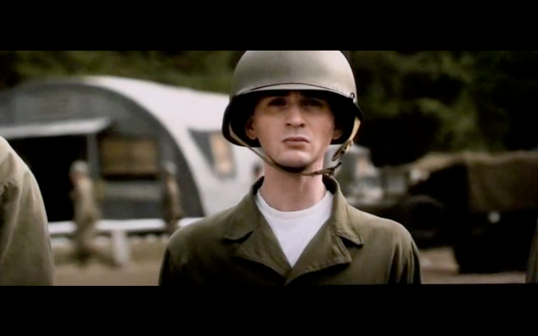 Now that Steve Rogers has been transformed, or remasculated, his demeanor is still that of a man who’s lived a life in a feeble body. While he is riding around World War II Europe on a suped-up motorcycle (presumably a Harley Davidson), he still lacks the sexual prowess of his 1980s predecessors. Steve Rogers confesses his inability to find love, but post-serum Rogers doesn’t seem to have much of a problem getting female attention, he just completely lacks experience with women. In the film, Rogers is seduced by a female secretary. He had just been declared a hero for effortlessly rescuing prisoners of war, but lost his confident composure when approached by the secretary. Though Rogers possessed a champion body, he maintained the same mindset and level of sensitivity from his days as a weakling. An apparent trade-off and contradiction of sorts, Rogers sacrificed sexual agency for muscles and a life devoted to his nation.

In contrast to the films with the nerds of the 00s, Captain America’s hero doesn’t get the girl. Scott Pilgrim vs. The Universe, Zombieland, and Kick-Ass don’t feature a protagonist with the body of an athlete; instead, they are meant to represent the average American teen type. These characters have to get over their various personal obstacles that don’t necessarily involve a physical challenge, but in the end, their prize is winning the girl. Their bodies remain the same, but they have to reach a new level of introspection in order to win the affection of a woman. In winning the girl, these characters regain an element of masculinity that isn’t necessarily found in Captain America. Indeed, Steve Rogers as the Captain wins the affection of Peggy Carter, but he doesn’t “get the girl” in the end. It is later revealed that Carter remembers Rogers in his pre-serum body, as her gaze is fondly fixed on his recruitment photo. The feeble Rogers is the one who won in the end. Captain America, on the other hand, sacrificed himself not for love, but for (and because of) his champion body (and country).

Captain America: The First Avenger, in this regard, is reshaping masculine representations in action film. The emerging masculine identity, I’ve proposed, combines the champion physique of the 20th century action star with the boyish innocence and sensitivity of the early 21st century protagonist. The new masculine hero is sexualized, not sexual. The masculine hybridity of Captain America may result in a hero whose muscles are, in fact, real, and still possesses behavioral characteristics more similar to a protagonist from a quirky indie film rather than that of a high-budget shoot-em-up. There will always be a place for the Stallones and Stathams, Ceras and Eisenbergs; however, the new face (and body) of the 21st century hero looks like Chris Evans’ Captain America.