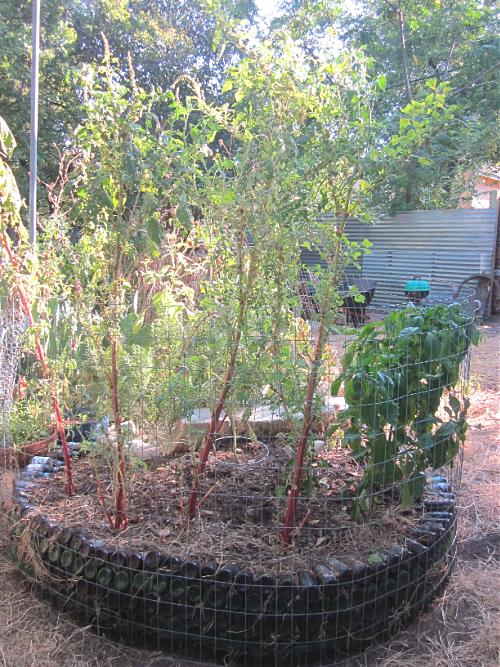 Seeds the size of little freckles potentially grow into plants taller than me. They like full sun and make valuable shade for more delicate vegetation. When I first planted it a year ago, the amaranth sprouts shaded by the pecan canopy were stunted. Early in the spring a mystery green grew along with them and took over. Sometimes I let these unknowns grow in the garden just to see what they turn into.

The amaranth sprouts in the yard’s sunnier spot were soon three feet tall, then five, then seven. We cook up the youngest leaves like spinach and throw them into soups and salads. Orange-headed beetles with black-and-white-striped backs fly in from somewhere and nibble the leaves to skeletons. Killing them with organic insect spray (with a neurotoxin derived from chrysanthemums) was pointless as new bug waves flew in every day. But we are after amaranth grain, not just greens, so ratty leaves are less of an agricultural than an aesthetic problem. At grain harvest time I discover numerous insects using the stalks as habitat — a young praying mantis, white spiders, tiny caterpillars that come out of the harvested grain that night to endlessly circle the lip of the bowl.

The mystery plant in the shady amaranth patch threw out a small bouquet of white flowers that ripened into dark purple berries the mocking birds ate. Fruitlessly, I search online, trying to identify it as edible or deadly. Finally, I snip a branch to bring to Boggy Creek Farm, where Carol Ann Sayle identifies it as “poke salat,” a wild green that’s toxic if incorrectly prepared. “You can eat the young greens, but you have to boil it and throw off the water three times. It was a pioneer food.” She guessed it got into our garden through bird droppings. It has many names across the south. It’s an edible weed like lamb’s quarters or dandelion greens. Elvis sang about a poor Louisiana girl who collected polk salad. Native and settler people used to make dye and ink out of the berries, and its roots fix nitrogen like legumes. In Argentina, the Ombú, a related plant in the genus Phytolacca, grows to over sixty feet tall on the pampas, surviving wildfires by hoarding water in its massive trunk. 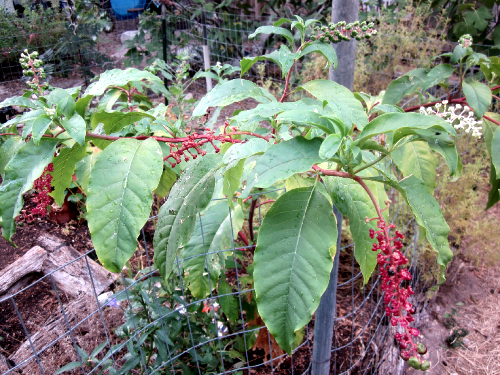 Midway through last year’s hot summer some amaranth grain becomes ready to harvest, but I don’t yet know how to do it. A quick Google search turns up several garden blogs — Kitchen Therapy (focusing on health issues and gluten-free foods), a Survival Podcast (“if times get tough”), and the Backyard Gardening Blog which gets my hopes up: “Yield will be approximately a pound of grain per dozen plants.” One day I daydream about building a solar dehydrator for surplus tomatoes and figs, and find DIY plans on Surviving the Middle Class Crash. On all of these blogs, gardening shifts from being a form of middle class pleasure/recreation to the serious register of provisioning the family or community. They host links to commercial sites like Seedsnow.com that sell seeds as “survival kits.” Cultivating plants becomes a way to directly engage what the blogs describe as economic and ecological collapse.

Information and techniques gleaned from these blogs, as well as seeds purchased online, are virtually circulating potentials that shape far-flung landscape patches. Similarly, collectively imagined futures are affective potentials that are beginning to change urban land use patterns and social relations. The middle class crash, or adverse weather like droughts and flooding connected to climate change, are future events1 that people are responding to (or preparing for) not only by individually altering consumption/production habits or imagining daily life off-the-grid, but also through social enterprises and green capitalist business ventures like community gardens, for-profit organic gardens, and seed distribution companies. Such businesses often double as informal educational institutions that teach the public about gardening and raise awareness on issues of “food security.” Publicly circulating fantasies of ecologically catastrophic futures alter the way we see/feel/use ordinary urban resources like abandoned lots, front lawns, and tap water. The “fantasy” or “imaginary” or “virtual” act on potentials in material practices and agential objects/things/life forms to generate new landscapes and atmospheres. Weedy plants like amaranth shine with some kind of promise of collective survival as future threats heave into everyday life.

Pigweed or careless weed is a wild strain of amaranth that cotton farmers despise. After harvesting the amaranth grain I thrash the stalks around the yard and next to a nearby highway to spread seeds. Maybe they’ll go weedy like the lamb’s quarters we got from Vince at the Cathedral of Junk that lives on as hundreds of purple seedlings popping up everywhere every spring. Carol Ann said she met a woman from Germany who lived off lamb’s quarters while her town was under siege in WWII. On top of growing greens, some amaranth species produce a gluten-free grain with protein content higher than wheat, soybeans, and milk. Like lamb’s quarters, their seeds are small, light, and plentiful, easily distributed across patchy landscapes by wind, birds, and rain. People have cultivated amaranth all over the planet (especially South America) for thousands of years. Specialty gluten-free, gourmet crackers like to advertise that they are made of “ancient grains.” The amaranth growing at Boggy Creek Farm are native weeds semi-cultivated for the greens, but they don’t produce much grain. 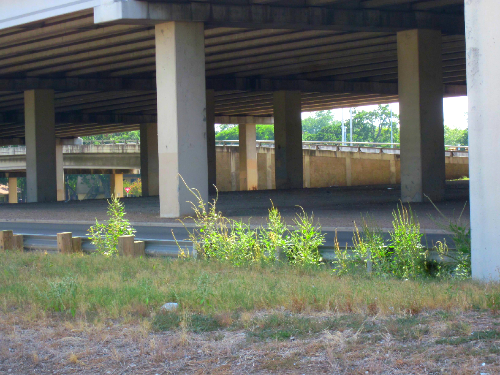 This spring, some amaranth sprouted around Ephemerata Gardens and next to the highway. It seems to be naturalizing — an Asian green, Amaranthus tricolor, from a packet of heirloom seeds distributed by the family-run company Botanical Interests. Like some garden blogs, the company’s owners express concern that old time gardening knowledge, techniques, and seeds are endangered. Accordingly, “Our packets are like mini-encyclopedias, full of information to inspire and assist every type of gardener.”2 The amaranth seed packet’s interior is printed with a breathless biographical sketch concerning the plant’s special relationship with soil, sky, and human bodies. Amaranth is

a C4 plant; it is much more efficient at converting atmospheric carbon to biomass than most plants on the planet. This is why it grows so fast, is so productive, and is very adaptive … Worldwide, the greatest use of amaranth is for the grain which contains the amino acid lysine, an amino acid NOT in other grains. Its combination with other grains makes it a fairly complete protein. Amaranth can actually be grown for the grain in the home garden (unlike wheat) and made into a flour; one square yard of amaranth can produce 2 pounds of seed! 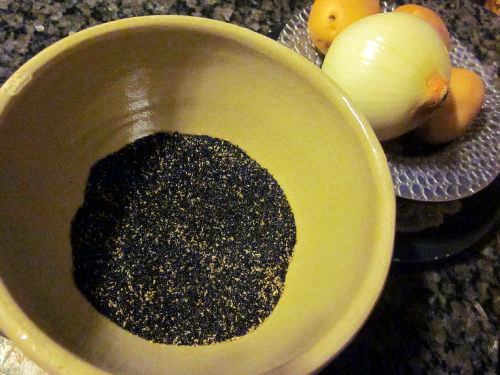 Last year I harvested about a half cup of grain from four plants in our sunnier amaranth patch. Dreams of growing my own flour are tempered by a steep learning curve. To harvest seeds, pick clumps of flowers from the stalks and rub them between your palms. Then sift them through a window screen onto a piece of cardboard. Try to blow away the remaining chaff without losing too much grain. Most importantly, do all this somewhere the seeds can enter the landscape patch and grow weedy. All they need is good rain every spring. What could be a better survival kit than edible urban weeds?