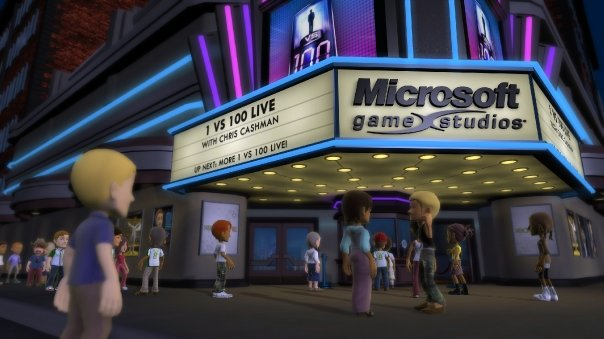 Microsoft’s attempt to carve out a Primetime for video games

In 2009, Microsoft launched “Primetime,” an attempt to merge the worlds of video games and television by establishing a marquee gaming timeslot. The pilot project for this primetime model was a version of the television game show 1 vs. 100, marking a unique venture into the realm of cross-media formatting. Converting television shows into video games is nothing new, but in the past these were single screen affairs. However, 1 vs. 100 was devised as a type of massively multiplayer event, bringing thousands of people online at the same time to compete in a live show.

Their approach to pulling off this translation, however, had certainly been seen before, with Ben Fritz wryly noting, “The future of video games is starting to look like the past of television.” Indeed, 1 vs. 100‘s emphasis on the live required players to tune in on schedule and sit through un-skippable commercial breaks, despite emerging in the era of the DVR. Moreover, following television’s lead, Xbox Primetime was supported by advertising, an uncommon and unproven method for video games. While Microsoft (and their competitors) have been fairly savvy about bringing television content to their consoles, this attempt at bringing a standard television concept to the medium of the video game quickly collapsed.

However, 1 vs. 100 was not simply a random attempt to remediate a television concept, but meant to capitalize on a number of significant trends in the gaming world and bring together a variety of different initiatives within Microsoft. First, it was Microsoft’s first foray into the realm of free-to-play gaming, a current industry trend for massively multiplayer games that Microsoft is said to be experimenting with today. This low barrier to entry was crucial for establishing a large enough audience to become appealing to the advertisers meant to fund Primetime, but also made the game appear as an added bonus for Xbox Live subscribers.


Microsoft’s Robbie Bach introduces Primetime and plays some 1 vs. 100

While Sony’s PlayStation Network online service is free for all users, Xbox Live requires a paid subscription (about $60 per year) for many fundamental services, most notably online gameplay1. Online multiplayer gaming is enough of an incentive for many dedicated gamers, but over the years Microsoft has attempted to add value to their Gold service to entice new users and encourage existing players to maintain their subscriptions. Netflix became an early “killer app” that made a Gold subscription worthwhile, but as Netflix has diffused to almost every other device under the television (including other competing consoles), Microsoft has had to expand their offerings. 1 vs. 100 filled this role perfectly, adding a free, family-friendly, recognizably branded game show that sought to bring players back to the online service on a regular basis.

Moreover, the game was released on the heels of a redesign of the online dashboard, dubbed the New Xbox Experience, that was meant to encourage social interaction (through the addition of avatars) and streamline marketplace purchases. 1 vs. 100 was one of the first titles to allow players to show off their newly designed avatars in-game, while prizes came in the form of Microsoft Points, the service’s invented currency, both of which encouraged player investment in the service. Furthermore, while Microsoft may not have been directly making money from sales of 1 vs. 100, the game was supported by integrated sponsorships and advertising and aligned to profit from Microsoft’s 2006 acquisition of in-game advertising firm Massive.

As such, 1 vs. 100 seemed poised to synergize, readying the technological infrastructure for free-to-play on the Xbox 360, encouraging an increase (or retention) of Xbox Live subscriptions by non-dedicated gamers, valorizing the acquisition of Massive and more deeply embedding in-game ads, encouraging usage of Microsoft’s online marketplace and currency, and ensuring regular online attendance of detached gamers.

However, despite critical success Microsoft cancelled 1 vs. 100 after two seasons and has quietly abandoned the idea of “primetime.” In many ways, it appears that Microsoft misunderstood the idea of Primetime in its translation from television to video game. For Microsoft, Primetime was defined primarily by a specific timeslot. However, in both television and video games, consumers are rejecting rigidly scheduled programming in favor of media available on their own time. For television, this points to the rise of timeshifting, while for games it signals the increased presence of bite-sized smartphone and Facebook games, as well as traditional game titles accommodating players’ limited or fragmented gaming time (through devices like frequent checkpoints)2. 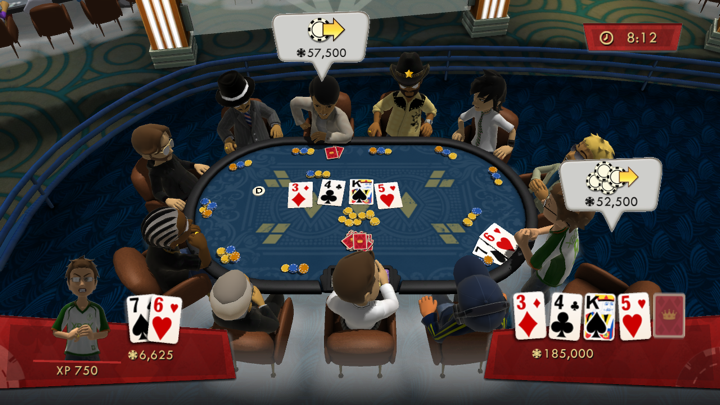 Lessons learned from 1 vs. 100 contributed to the development of Full House Poker

Despite these threats to the “time” in Primetime, Amanda Lotz suggests that this content is still “the most viewed and dominant form of ‘television’” largely because primetime is “determined as much by its budgets and production practices as by the time of day it airs3”. For games, however, the big budgets, high production values, and marketing muscle of “AAA” game titles are more likely to be reserved for first person shooters like Halo or Call of Duty than for free quiz games like 1 vs. 100. Much of the development cost of 1 vs. 100 went into the infrastructure necessary to facilitate thousands of gamers in one coordinated game on Xbox Live. These expenditures and the experimentation with live programming were expanded in the unlikely “spiritual successor” Full House Poker, as well as integrated into the system’s ESPN functionality. So while 1 vs. 100 may not have found an audience quickly enough, it laid the groundwork for future free-to-play and large-scale coordinated interactive entertainment on the console.

Finally, television’s primetime comes out of the medium’s longstanding relationship with advertising, amassing viewers in order to deliver these collected eyeballs to advertisers. Video games, on the other hand, have struggled to engage with advertisers even as monetization systems change. Today the traditional boxed retail product is giving way to games as services funded by subscriptions, microtransactions, or added downloadable content, but still without a viable solution for primarily ad-driven content. Sources close to 1 vs. 100 claimed lack of advertising support was at least partially responsible for the game’s cancellation, which seems likely given Microsoft’s closure of Massive a few short months later. 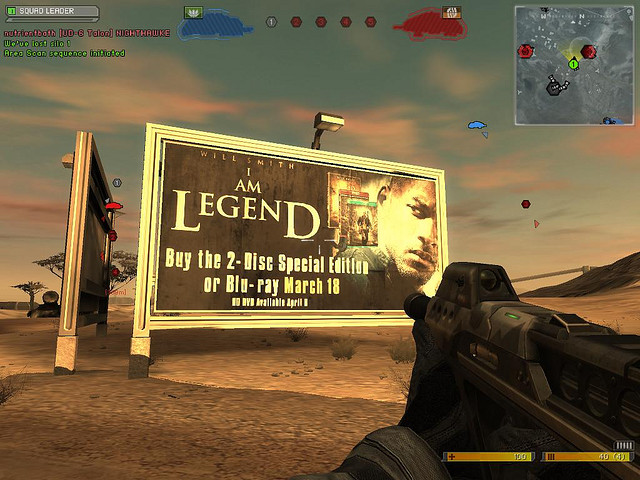 An advertisement for I Am Legend towers over the virtual battlefield

Ultimately, for a medium like the video game that has yet to figure out a viable advertising method and is in the midst of a chaotic struggle over monetization, Primetime may simply be an idea that is too entrenched in the specificities of television to be easily translated.