Specifically, I’ve conceptualized this term to apply to the ways in which black gayness is deployed in a bid to kill two (or more) birds with one stone (although this term can be applied outside of a black gay context). Put another way, including black gay male characters within otherwise white shows allows for the representation of a double dose of otherness – a black character to appease those, like the National Association for the Advancement of Colored People (NAACP), who call for “more color,” specifically on network television, and a gay character to appease those, like the Gay and Lesbian Alliance Against Defamation (GLAAD), who want more representations of gayness on television. The driving question behind the notion of “compound otherness” is: In a sea of white characters, is there a lone character who is tasked with representing all of the “otherness” the show presents to its viewers? 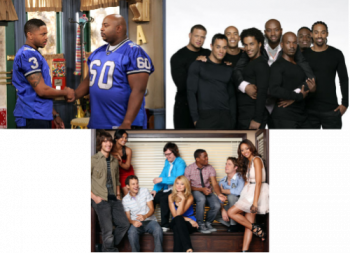 (L to R) The Game, Noah’s Arc and Greek provide instances of television texts that do not exemplify “compound otherness.”

Because we often understand concepts in reference to its binary opposite, “compound otherness” doesn’t apply to a show like LOGO’s Noah’s Arc, which is set in a black gay community, largely devoid of whiteness and heterosexuality (although if there were a white heterosexual character, he or she would likely signify “compound otherness” as I’ve conceptualized it). Nor does it apply to a show like the UPN/BET show The Game where a black gay character is featured for a two-episode arc because he is simply gay in an otherwise black world – there is no compounding of otherness here. Lastly, “compound otherness” doesn’t apply to ABC Family’s Greek because while Calvin, is both black and gay, he is not tasked with representing the only black person nor the only gay person on the show. In other words, what makes “compound otherness” unique is that a single character does all the work of otherness in a text. 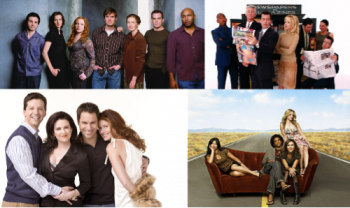 (L to R) Six Feet Under, Spin City, Will & Grace and Emily’s Reasons Why Not all exemplify “compound otherness.”

Several texts exemplify this concept as I’ve conceptualized it including NBC’s Spin City and Will & Grace, HBO’s Six Feet Under and ABC’s short-lived Emily’s Reasons Why Not. The space here does not allow for an examination of the ways each of these texts exemplify “compound otherness,” but I want to briefly assay Will & Grace to illuminate how the show fits within the framework of “compound otherness” as I am conceptualizing it. The decision to use Will & Grace to illuminate what I mean when I talk about “compound otherness” has nothing to do with the popularity or enduring cultural significance of the show. Rather, it is because the show marks an axis of otherness that is not often observed in American television: nation. 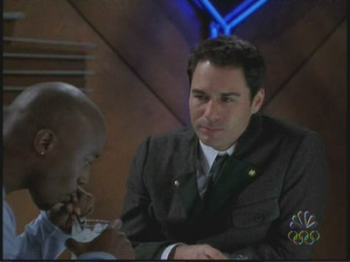 In Will & Grace’s eighth season, Taye Diggs portrayed James Hanson, a Canadian black gay man who also happens to be Will Truman’s love interest (at least for a four-episode arc). While the show has featured Gregory Hines as Ben Doucette, a love interest for Debra Messing’s Grace, and series regular Shelley Morrison as Rosario Salazar, there are two ways in which James Hanson’s otherness is compounded that separates him from those representations. First, Hines’ Ben Doucette is simply a black heterosexual man on Will & Grace, satisfying only one axis of difference – blackness. Heterosexuality is normative on the show as 50 percent of the series regulars are heterosexual and Grace is involved in far more romantic relationships than Will. Rosario does satisfy my definition of “compound otherness” in that she is both Hispanic and lower class. Viewers are to assume that although Will and Grace cohabitate for the majority of the show, that they are middle to –upper-middle class, Karen is certainly upper-class and Jack, although he only works odd jobs, manages somehow to be read as middle class (hence my assertion that this theory is expandable beyond the way in which I am developing it here). But James, who is more important for my theoretical endeavor, compounds otherness by embodying both race and nation.

For James, it is illustrative to look at the way in which the character is raced and sexualized in a way that marks his difference from these other characters of color. First and foremost, James is one of the few characters on network television whose gayness and blackness are made explicit. Instead of making viewers read race onto Diggs’ body, the dialogue over the course of his four-episode arc marks him racially as different. In one of the episodes, Grace is happy to participate in a “green card marriage” if only to send her mother a Christmas card with her black husband and Karen Walker gets a kick out of the notion that interracial marriages are legal. He is hypersexualized like the big black buck of stereotyping lore. This is particularly illustrative when several wedding guests (and Jack McFarland, Will’s best friend) allow that James could pound them each “like a piece of veal” reifying the danger associated with interracial coupling and the myth of sexual prowess of black male bodies.

Clip from NBC’s Will & Grace episode The Definition of Marriage

In addition, Diggs’ James is marked as different with reference to nation, with the explicit subject positioning of him as Canadian. While the claim can be made that this marking of James as Canadian works as a plot device, I argue that it provides another axis along which to mark difference. One of the guests at the wedding asserts that he was unaware that they “built them like that in Canada.”

Most importantly, James is a black gay man (or a gay black man depending on how one reads him)1 – a little-seen creature on television – especially on a show that enjoyed/s ratings and critical success like Will & Grace. Because gayness is most often associated with whiteness2 in mass mediated discourses as well as Black Nationalist discourses, to see an explicitly black gay male body marks it as different (perhaps his Canadianness is specifically used as a plot device to place his outside of an American notion of blackness and a mythical black community?). His black gay body, like his black body, is sexualized in a way to which other characters are not subject. Jack, although allegedly Will’s best friend, offers to host a naked bachelor party with just Jack and James as invited guests.

As media scholars continue to examine the types of representations on television, particularly with a critical eye toward the ways in which minority bodies are constructed, it’s important to examine the ways in which single minority bodies are called up to represent many axes of otherness. Are these shows being touted for their representations of black men and gay men when those characteristics really represent “compound otherness?”