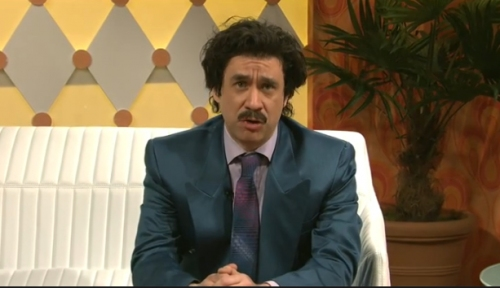 As a curious addition to the reoccurring sketch repertoire of Saturday Night Live (SNL), “The Manuel Ortiz Talk Show” has now had three or four incarnations over the last couple seasons. While undeniably a caricature based on perceptions of the Spanish-language television talk show genre, it seems to also be a unique text in that it does not refer to an ambiguous Chicano-centric latinidad. The sketch provides an opportunity to examine emerging alternatives to dominant representations of a Latino/Hispanic identity for it utilizes a representation of a Latino population less familiar to a U.S. audience. However, as the sketch is performed by almost exclusively white actors, it operates not as a reflection of Domincaness, but a performativity of Dominicaness. In this column I am attempting to do a performative analysis on a media text that’s intention is to be a performance. However, I am not looking at the literal theatricality, but the symbolic performance of identity as costume. Within this performance of a Latino other, a construction of Dominicaness is therefore created for a uniform U.S. mainstream audience. Consequently, this seemingly out of place sketch moves satirical and parodic performance beyond the theatrical to a level of performativity of identity, more specifically, a drag of latinidad, that is based on an appropriation of constructed essentialized Dominicaness.

While not unusual for the mostly white cast of SNL to quite literally, as well as symbolically, perform sketches in black or brown-face, the sketch of “The Manuel Ortiz Talk Show” seems to be an ethnic representation without a well known mainstream referent. Situated as Dominican only through a brief channel promo that displays later programming, the viewer is shown the channel name, television dominicana, displayed in blue with a red and blue emblem that is reminiscent of the Dominican flag. Without this introductory promo, the large majority of SNL’s audience would not be able to identify it as representation of Dominican television. While it does vaguely draw on and subsequently parody a few aspects of Dominican talk show formatting and style, for a mainstream audience not in the know, it seems like a very generic spoof of Spanish-language programming. However, because of this promo introduction to each sketch it is positioned within a highly specific space of Latino representation, even while the ubiquity of Latino or Hispanic generic representational aspects within the sketch itself are undeniable. For example, Manuel himself, as well as every man that is featured in the sketch, has been packaged with a certain generic Latin look that involves characteristics such as dark hair and mustaches. These markers disavow, for the purposes of the sketch, the white performers’ racial identification, providing an ethnicized reading of identity.

While the packaging itself is reason enough to analyze this particular sketch, it is the behavior of the performers that locates for the audience the highest intensity of comedic appeal as well as the most exaggerated aspects of the sketch. This exaggerated behavior is best highlighted in the staging of performers entering and exiting the stage of this fictional show. As the show’s guests enter onto the stage they are greeted with Latin-Caribbean music which signals to everyone on the fictional talk show that they should dance. Throughout the sketch, as a new guest comes onto the stage the music again plays and every performer stands up and dances this same dance. The sketch will involve 10-20 of these entrances and exits that are accompanied by this music and the simultaneous dancing. It is as if exaggerated “Spanglish” was not enough for the over the top caricature that the sketch’s writers aspired to, they needed this shared and repetitive dancing behavior to push the sketch over the edge to the ridiculous. It is this heightened sense of performance and caricature that transcends the sketch from mere theatrics to a performativity more reminiscent of drag.

According to Judith Butler, gender is not something that one is it is something that one performs. To highlight the performance that is gender, she references drag as a means of exposing this constructed performativity. She insists that “drag…implies that all gendering is a kind of impersonation and approximation…gender is a kind of imitation for which there is no original…”1. Furthermore, “by disclosing that there is no original to imitate, drag denaturalizes, divulging the culturally fabricated nature of gender. It reveals all gender as only ever parody”2. While the above cited discussion of performativity is located solely in the academic discourses of gender, this concept is not un-reconcilable with performances of both race and ethnicity. Just like gender, race and ethnicity are identities with no natural or essential existence and are, accordingly, performed in similar ways.

Furthermore, due to the fact that none of those who are performing this Dominicaness within the sketch are in fact Dominican, what we actually have here is something very similar to gender oriented drag performance. In essence, “The Manuel Ortiz Talk Show” is a drag of Dominicaness where white actors are embodying and offering a parody of what they are constructing as Dominican. The embellished packaging of the performers is an entry into the embodiment of what is being represented as Dominicaness, where they subsequently are able to “wear certain cultural signifiers…” through their performance3. When speaking of gendered drag, Butler argues that drag “produces on the skin, through the gesture, the move, the gait…the illusion of an inner depth”4. In the same way, the sketch is a parodic illusion that is produced on the performers’ bodies. 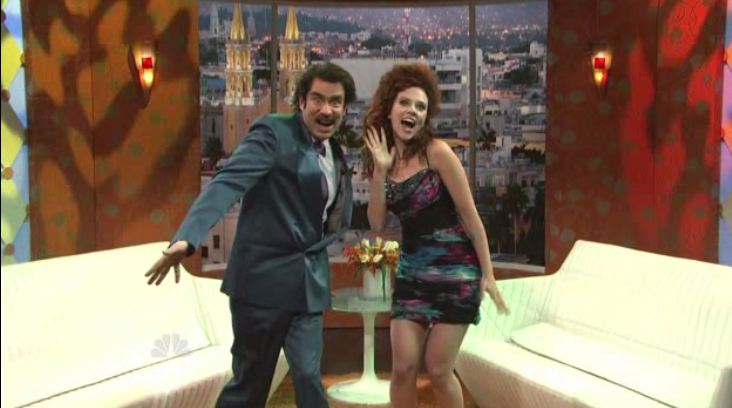 One of the most confounding aspects of “The Manuel Ortiz Talk Show” is that it exists at all. A mainstream U.S. audience has very little knowledge of the Dominican Republic and Dominican media. However, the fact that SNL is produced in New York City does seem to suggest that the writers of this sketch might have an atypical awareness of a Dominican presence. The sketch would be most entertaining for those familiar with Dominican media, for instance Dominicans in the U.S., people in New York City (who because of their proximity to Dominican communities have a better insight into Dominican culture), and other Latinos of Caribbean origin or descent. Outside those three groups, these references would not connect to already known aspects of Dominican media.

It is because of this lack of an original referent, this text therefore does not operate as a simple parody of already understood Dominicaness, it becomes constructive. While politics of representation are just as valid to discuss, it is the embodiment of what is represented as Dominican latinidad that seems most important here. The sketch breaks with an unidentified representation of generic latinidad (while continuing to use the conventions of that form of representation) to provide an alternative performativity of a more marginalized and specific latinidad. This break is something infrequent in U.S. media, one that would normally provide potential of a better mainstream understanding of a not so pan-ethnic identification of a unified latinidad. When alternative representations are performed as a reflection of the performers’ identity, not as a drag of ethnicity or race, we see that “at the heart of the intersection of performance and latinidad is a desire to find spaces of possibility, instability, and coalition across difference which are not static, sentimental, or overly utopian”5. However, that is not the case in the performativity we see in “The Manuel Ortiz Talk Show.” This constructed Dominicaness, which has no authentic or original referent for the mass audience, is utilized by the sketch as a mask, as a costume. As such, the performativity of the sketch is little more than an inside joke to a select few and the drag of Dominicaness for the majority of its audience.

1. Franky Benítez
2. Hot Off The Press