In Wings of the Morning (1937), a young girl, Maria Duchess of Leyva (Annabella), pretends for a sojourn to be a Spanish duke who, mixing with a gypsy colony in Ireland, meets a handsome young Canadian horse trainer, Kerry Gilfallen (Henry Fonda). A number of early scenes engage in a particularly interesting form of gender play, wherein, for example, this “Duke” encounters Kerry in his bath or, later, is forced by circumstances to spend the night in a small barn sleeping with him in the hay. Dressed carefully as a boy, yet at the same time clearly enough for the viewer a girl in disguise, this character puts on a gruff voice and does the best she can with gestures and attitudes befitting a certain bratty masculinity. For his part, Kerry is entirely innocent of the disguise through these scenes, until one particular moment when, having retrieved the Duke’s horse Wings of the Morning and returning with the “boy” and the beast to his camp, he decides they should pause for a pre-breakfast swim in a tranquil lake. The boy runs off “modestly” but Kerry corners him in a huge bush and proceeds (hors scène) to tear off the clothing. As we see shoes and fabric flying out of the leaves we suddenly hear Kerry exclaim, “Oh! I didn’t know!” Not long later, in his estate, the heroine appears in full female regalia at the top of a flight of stairs (regalia decorated with burgundy red, indeed, a color to which the camera was especially sensitive and one which led a viewer to exclaim special delight [see Mayer qtd. in Street 206], inspiring him to gaze in wonder and exclaim, “Holy mackerel! My friend the Duke!” It is at this point, of course, that the two can begin a romance, and this they do, doddling beside a little pool and dipping their feet together, Kerry in a pale yellow turtleneck and Maria in a pale yellow straw hat.1  2 Sharply limning all of these proceedings is the splendid pioneering three-strip Technicolor cinematography by Ray Rennahan and Jack Cardiff: this film was the first shot in Technicolor in England (see Slide 37).3 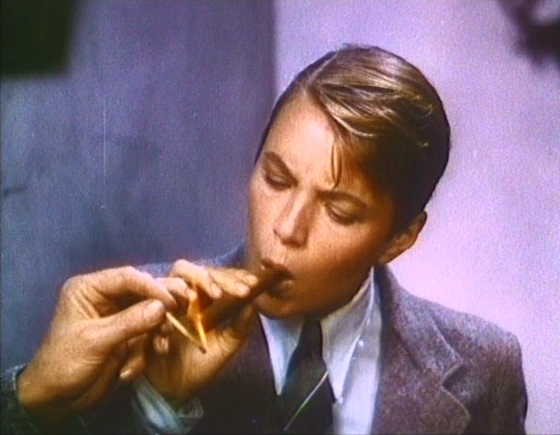 What I wish to point out is not only that, taken seriously, Kerry’s erroneous reading would be insubstantial and inadequate, in itself, for promoting the plot (as it would be: this isn’t a story about a horse trainer meeting a boy); and therefore that it is mandatory we should be given some alternative view, a continuing portrait of “Mario” as a flawed construction being mounted by a (legitimately) conniving young woman; but that the performance must be only a little flawed, or at least, not so flawed as to call into question Kerry’s perception (and thus, his dignity). If we must continually be prodded to see a femininity that he is continually missing, that femininity mustn’t be so categorically obvious that he becomes weak for missing it (note in this light Judith Butler’s consideration of gayness as “necessary drag” in “Imitation” 227ff).4 Nor can the fact that he is missing it be left for attribution to any fault of his own, or to the overriding cinematic convention that binds the elements of this story (and consciousness of which, on our part, would remove us subtly from engagement with the moment). I think it is possible that the maintenance of tension between Maria’s intentions at disguise and Kerry’s (for us, somewhat difficult) naivete is achieved not so much by virtue of what Annabella and Fonda manage to accomplish before the camera (although they are both very precise in directing their gazes, exhibiting poise, and using movement to playfully cajole one another as two young males might) as by virtue of a state of desire that can be taken as applying to the viewer. 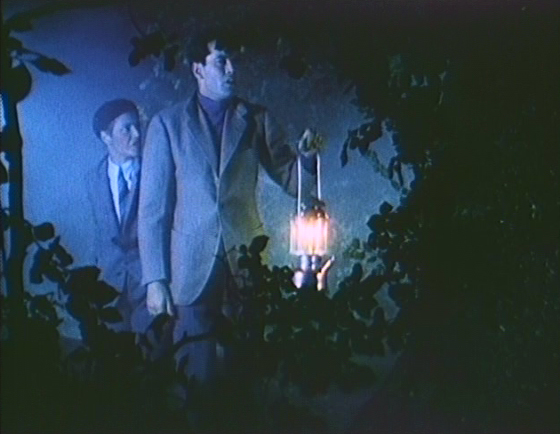