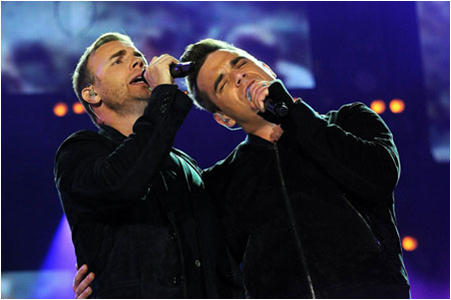 “My wife calls him my boyfriend. I call him my captain.” Williams introduces Gary Barlow at Help For Heroes, Twickenham Stadium, 12th September 2010.

At the time of writing, a CFP for the interdisciplinary conference “Making Things Whole Again: The Take That Reunion” is being circulated following what it calls “the long-anticipated reunion of Take That and Robbie Williams and the unprecedented sales figures for their summer tour [in] 2011.”1 This is symptomatic of more than purely scholarly interest in this current British pop culture phenomenon. The reintegration of singer Robbie Williams into the line-up of Take That, the boy band that spring-boarded his music career, was a UK pop culture talking point in 2010. Take That were a pop music phenomenon in Europe in the 1990s, they split in 1996 following the departure of Williams from the group, and successfully reformed without him in 2006. The relationship between Williams and former band-mate Gary Barlow, the group’s principal songwriter, played out in the media as a bitterly competitive rivalry, as both embarked on new careers to markedly different levels of success. However, following the announcement in July that Williams was rejoining the group, the pair publicly reconciled. The mediation of this reunion occurred surrounding the release and promotion of their single “Shame,” a duet that narrativized their estrangement and subsequent reconciliation, and that primed the public for the group’s accommodation of Williams, appositely bridging his re-entry in a manner commensurate with their larger narrative. In line with current popular cultural conceptualizations of close male friendships, and a culture attuned to the vagaries and changing ideals of mediated masculinities, the public spectacle of reconciliation staged by Williams and Barlow was framed, perhaps inevitably, as a bromance.

As one formation of postfeminist masculinity, the bromance trope has considerable discursive currency in contemporary media. Before the widespread adoption of this single word epithet, the phenomenon was variously termed “man crush,”2 “guy love”3 and in academia its antecedents can be found in earlier discussions of, for example, “queer straight masculinity,”4 “male intimacy”5 and of course “homosociality.”6 It has been succinctly described by Glyn Davis and Gary Needham as “a queer form of bonding between straight men,”7 whereby “[t]he borders of homosociality, masculinity, and acceptable physical affection are troubled and toyed with… indicative of a wider cultural awareness of sexual identity fluidity.”8 There has been a buzz of scholarly interest in this trope (e.g. Kelli Marshall’s recent Flow piece discussing Boston Legal) particularly around a pronounced Hollywood trend for the production of bromantic comedies, most notably I Love You Man.9

It is fitting that the reparation of the fractured relationship between Barlow and Williams should take place in discursive terms that queer homosociality, given that the group’s ur-narrative has, to varying extents and at different times, self-consciously unfolded in queer terms and through a discourse of “ambiguous sexuality.”10 It is an established part of Take That’s rise-to-fame narrative that their early promotional build-up took place at the UK’s gay clubs, which they toured under manager Nigel Martin-Smith. Also well known are Smith’s allegations about Williams’ sexuality, who in turn has always courted the queering of his public identity, making po-faced statements such as “I only wanted him to love me,”11 “I think there is a gay man in everybody,”12 and “He’s my soulmate… I hate it when I’m not around him.”13

The media’s narrativization of the Williams/Barlow bromance of September and October 2010 effectively commenced with the 2005 broadcast of Take That: For The Record, the documentary produced around the tenth anniversary of the group’s split, which prefigured their then imminent reformation, sans Williams. Williams displayed open hostility towards Barlow (“I mean it. He is a wanker”) in a continuation of the combative terms upon which their fractured relationship had been framed since the group’s dissolution, and with which Barlow was complicit (“Only one person can win.”) The extent to which this played out as a spectacle of competition, rivalry and one-upmanship was lampooned in the satirical series Star Stories(see below the two clips).[flv]http://flowjournal.org/wp-content/uploads/2011/02/Star-Stories-clip-11.flv[/flv]. [flv]http://flowjournal.org/wp-content/uploads/2011/02/Star-Stories-clip-2.flv[/flv] Latterly, For The Record was bookended by Take That: Look Back Don’t Stare, which chronicled Williams’ reintegration into the group, filmed prior to but broadcast after his reconciliation and collaboration with Barlow.

The UK press were quick to utilize the currency of bromance as buzzword of the moment in popular conceptualizations of masculinity, enthusiastically framing their renewed friendship and performing partnership (one paper called it a “‘bromantic’ reunion.”14 ) as such, as it had recently done for the partnership of Prime Minister David Cameron and his deputy Nick Clegg following the formation of the coalition government after the UK general election.15 Something similar occurred surrounding the release of The King’s Speech and its depicted friendship between George VI (Colin Firth) and speech therapist Lionel Logue (Geoffrey Rush).16

As indicated above, the release of ‘Shame’ anchored and fuelled the mediation of this reconciliatory bromance. The normalization of emotional articulacy to some formations of postfeminist masculinity, and the advent of the “post-closet era”17 notwithstanding, ‘Shame’ and the male intimacy required of its performers, still evinced anxiety over its transgression of the bounds of straightforwardly normative constructions of straight masculinity. This was made manifest via the tongue-in-cheek recourse to the iconography, visual aesthetic, queer gazes and performance mannerisms from Brokeback Mountain, which is heavily gestured towards in the track’s accompanying music video in the aforementioned ways. The video for ‘Shame’ over-determines its depicted queerness to the point of what Margo Miller calls “ironic dismissal,”18 also evidenced by Williams’ loaded reference to his wife while introducing Barlow as his “boyfriend” and “captain” live onstage at a televised concert, which kick-started the framing of their reconciliation as a bromance. 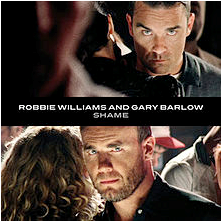 The single cover for ‘Shame’ depicts the ironically charged gaze exchanged across a crowded bar in a scene from the music video (see below).

The reintegration of Williams into the larger group dynamic has also borne witness to the re-queering of Take That, as evidenced by their homoerotic video for ‘The Flood,’ their first single since Williams re-entered the frame, which cross-cuts between a boathouse locker room and a boat race, and by live performance of it surrounded by naked male dancers. 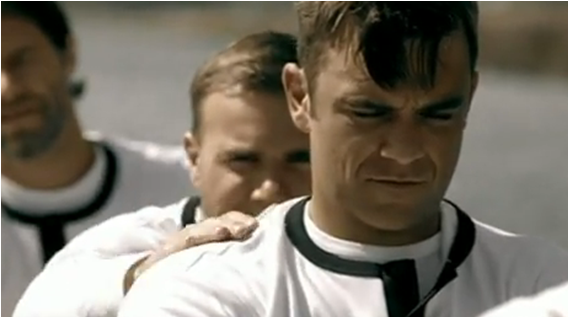 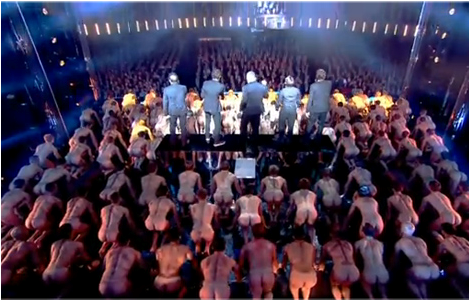 The fifteen-year-long build-up to the end of one of British pop music’s most well known and bitter rivalries thus culminated with a cross-mediated bromance that a generation of aging fans attuned to the current zeitgeist of changing masculinities has seemingly willed into being.