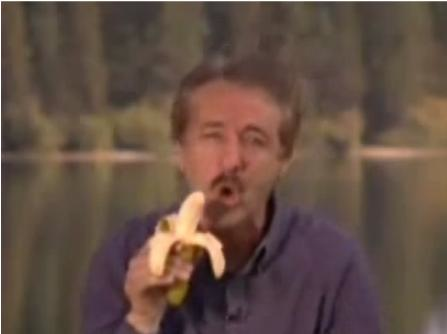 How does this banana fit?

Colleagues and I recently completed two studies examining short, de-contextualized videos, such as those one might find online. Some of this research is now in print, a format sometimes ill-suited for demonstrating the flow of media culture. I have chosen to take advantage of FlowTV’s online format—specifically embedded video and reader comments—to invite readers into a small portion of this research.

To appreciate the effect of de-contextualization and maximize the potential for polysemy, I now invite readers to view this video before reading on about the video and why we were studying it. This may be an artificial viewing experience for some, but everyday many people click on video links with little explanation or context. Feel free to enter your reading in the comments section below.

Some Readings of the Banana Video

I located this video in 2007 by using the search term “crazy video” on YouTube. My colleagues and I showed this video, along with many others, to 26 participants and asked them to describe what they saw (Johnson and del Rio 2010). We found nine distinct responses with some participants producing two readings simultaneously. Let’s look at them by frequency, starting with the readings produced by only one participant:

One participant said only “It was about a banana.”

One participant said it was a game show where participants were given a prop (the banana) and asked to improvise humorous remarks.

One participant said it was “women’s programming.”

One participant said it was a debate and the other person in the video was about to give a rebuttal.

One participant stopped the video in middle and stated that it was “ridiculous.”

One participant gave a very lengthy answer covering elements discussed by other participants, but concluded that she could make “no guess at all” about what it was.

Three participants said it was a commercial or infomercial for bananas.

Four participants said it was a “joke” or “parody” involving sexual innuendo that one would find on a comedy show, such as Saturday Night Live or MadTV.

Fifteen participants said it was “a religious video,” “religious program,” or “infomercial promoting the existence of God.”

The majority of participants, fifteen, go it “right”—in the sense of correctly recognizing the producers’ intentions. The video is an excerpt from a series of religious videos titled “The Way of the Master,” produced by the two men who appear on screen, Pastor Ray Comfort and 1980s sitcom star and evangelist Kirk Cameron. Recognizing Kirk Cameron and knowing that he is an evangelist closes down other possible interpretations. When I first viewed the video, I did not recognize Kirk Cameron and believed there was a possibility the video was meant to be humorous. Only when a graduate student pointed out that the second man in the video was Kirk Cameron did I know for certain that the producers really believed the argument stated in the video. 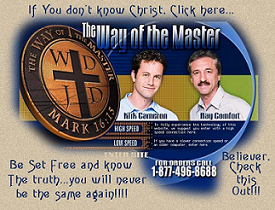 The Way of the Master

My colleagues and I studied this de-contextualized video fragment, along with many similar videos, to develop a vocabulary for discussing satire, irony, and parody from the perspective of the audience rather than the author or text. Defining and studying satire, irony, or parody is challenging because they involve a relationship between author’s intentions, textual features, and audience responses—three things rarely combined in one study. We studied the banana text along with intentional satires to compare audience responses and understand how audiences distinguish between the two. We found that participants did not always describe satire using the same vocabulary as critics and scholars. This is more than just a difference in terminology; the labels employed by some audiences suggest they may be using a different categorization scheme altogether.

Out of 26 participants, only four expressed an opinion that the banana video was a parody or joke. But even if the text isn’t interpreted as a joke or parody, it can offer some of the same enjoyments, which is one reason it was excerpted in this form and distributed on YouTube. There is potential humor in how bad the argument is, the juxtaposition of infomercial hype with a simple banana, the sexual innuendo, and the low production quality. There is also pleasure in offering or watching rebuttals. Ray Comfort is a popular target for atheists wishing to argue with believers. For someone who enjoys argument and has basic video production skills, Ray Comfort’s work is great source material (some rebuttals video can be found here and here).

These sources of viewing pleasure are the same ones found in intended satire and parody. The terms satire and unintentional satire may be variations of what viewers call the ridiculous. The participant who chose to stop the video stated that it was “ridiculous.” In a different study of intentional but ambiguous satire (Johnson, del Rio, and Kemmitt 2010), we found audience members using terms such as “joke,” “ridiculous,” “funny,” and “crazy,” without using terms like “satire” or “parody.” The term ridiculous is useful because represents both a textual property and an audience activity. A ridiculous text is one ridiculed by audiences, an act expressed in the many responses and parodies prompted by the banana video. 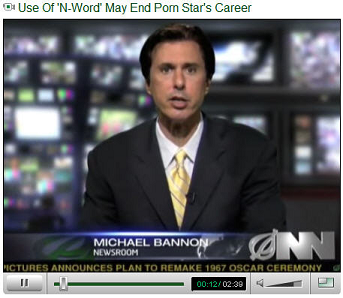 A “ridiculous news pundit” from the Onion News Network

Other examples of ridiculous discourse include news and commercials along with their parodies. A search on YouTube for “ridiculous news pundit” turns up video of Bill O’Reilly, Nancy Grace, Tucker Carlson, and the Onion News Network. Comically bad commercials are collected in playlists online, along with many commercial parodies which mimic their tone. Sometimes it is difficult to tell the difference, as with this example:

It only took me a moment to investigate the authenticity of Bobby Denning, Inc., the store featured in this video. Seems real. Did the commercial ever air? I haven’t investigated further and I imagine few of the approximately 260,000 YouTube viewers have either, because ascertaining its authenticity is not a requirement for enjoying it. The video is just ridiculous, and some people enjoy that kind of thing.

Johnson, A., & del Rio, E. (2010). Interpretation and evaluation of satirical arguments. Conference paper—International Society for the Study of Argument.

2. The Way of the Master image from Scrape TV Humor