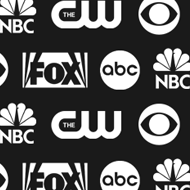 In Part 1 of this series of articles, we considered the positioning of characters of color in the television network promotional photos for the 2009-2010 television season. In this installment, we discuss some of the challenges we experienced conducting this research and some questions that came to mind while doing it. In Part 3, we will consider the 2010-2011 season’s photos (including Undercovers and Outlaw).

Our first challenge for this series was to determine exactly who “counted” as an actor of color, a surprisingly difficult task. Although the photos were accompanied by an alphabetical list of actors’ names, there was no key for us to determine who was who. We recognized many of the actors. Some have been regulars or recurring guest stars on other shows. By eliminating them, we could determine who the lesser-known ones were.

Identifying who is considered an actor of color is nonetheless a dicey proposition. While not wanting to invoke a “one drop” sort of policy, actors were identified as “of color” if they looked “other” or were identified someplace on the Internet (mostly on IMDB or Wikipedia) as having at least one parent or ancestor from the identified ethnic group. However, the labels are quite malleable. For example, words like Latina/Latino, as opposed to Hispanic, and what those words connote, are contested. The fact that people that form these cultures have complexions varying from very light to very dark can make this complicated. Does Brazilian Morena Baccarin, who is ethnically “white” and doesn’t “look Hispanic” (we only found out she was “other” when doing research) label herself as “of color”? How do we identify the many mixed-race actors in the group?

While the darker complected Lourdes Benedicto of ABC’s Flash Forward is relatively classifiable as “of color,” what do we make of the Brazilian Morena Baccarin of the same show, or of the half Japanese, half white Reiko Aylesworth of ABC’s The Forgotten?

One thing that made this more intriguing is that names were usually not something that indicated the character’s ethnicity. For instance, John Cho would have been easy to identify as having Asian ancestry just from his name, even if he weren’t well known already. On the other hand, when we didn’t recognize Asian-American looking Stephanie Jacobsen of Melrose Place and Jenna Ushkowitz of Glee, we couldn’t identify them in their photographs based only on their names.

In addition, for women in particular, it is obvious that Hollywood gravitates toward a beauty standard that favors “whiter” features, such as lighter skin, smaller noses, long straight hair, or eyes that aren’t too “slanted.” Many women of color chosen for television roles, therefore, appear to be mixed race. As Mary Beltran and Camilla Fojas state in the introduction to their book Mixed Race in Hollywood, “Recent roles are part of the overall boom in the casting of mixed race actors in contemporary film and television . . . It cannot be determined how audiences ‘read’ these actors and models with respect to notions of race and ethnicity, however, particularly if they portray characters coded as white ” (11). More often than not, these mixed-race female actors are likely often read as fully African-American or Asian-American or Latina by viewers and are chosen instead of female actors with darker skin or other easily identifiable markers of race.

Mixed-race actors may also be increasingly popular because they give the appearance of reflecting the “new America,” one full of comfortably mixed marriages, happily blended workplaces, and bully-free schools. In Beltran’s chapter in her edited volume, she writes that someone like Jessica Alba, who reads “white,” is likely to have a very different, and more “bankable” career than someone like Rosario Dawson, who reads as “of color,” even though both have Latino ancestry (264). Alba herself told Entertainment Weekly that “the actresses with darker features usually end up playing villains or foreigners or the girl the guy cheats on his girlfriend with.” Therefore, a “heroine” needs to be closer to white on the beauty spectrum. 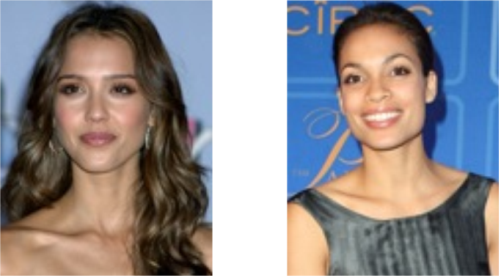 The more “white featured” Jessica Alba gets different kinds of roles than the darker Rosario Dawson.

Keeping all these issues in mind, out of 119 actors shown in the collection of photos of the casts of 17 dramas or dramedies 2009-2010, we counted (assuming that any of these may be mixed-race) one Latino man, two Latina/Hispanic women, three Asian-American men, four Asian-American women (one technically a girl), seven African-American men, and six African-American women, plus one actor who is Maori. In other words, 24 out of 119 actors (or approximately 20%) are, or may be, “of color” and 95 are white, compared to 41.92% of people of color in the actual US population.1 Three photos, those for Vampire Diaries, Parental Discretion Advised (aka Life Unexpected, which includes only the lead actress), and Parenthood, whose photo included 13 people (including small children), had no actors who appeared to be of color. South Asian faces were not part of such lineups on US television until extremely recently and now there are quite a few (most on comedies or cable). Native Americans are still entirely invisible.

The Vampire Diaries (CW), Parenthood (NBC), and Parental Discretion Required (CWᡄbecame Life Unexpected) had no actors of color in their upfront photos.

The photos demonstrate that racism is still in force at the television networks. No character of color is central except for half-Asian half-Caucasian Lindsay Price of Eastwick. As bell hooks explained, “For the most part television and movies depict a world where African Americans and whites co-exist in harmony although the subtext is clear; this harmony is maintained because no one really moves from the location white supremacy allocates them on the race-sex hierarchy” (hooks 1996, 113) as these photos obviously show. The sexism that hooks mentions is also a factor. White men are in the front in dramas a lot more than they are not. ABC was the worst offender. In every ABC photo except for Eastwick, a white person is in front, with a second white person slightly behind and anyone of color towards the ends of the photos. NBC and Fox were slightly more inclusive, including characters of color towards the center of some photos, while CW employed a very small number of actors of color. 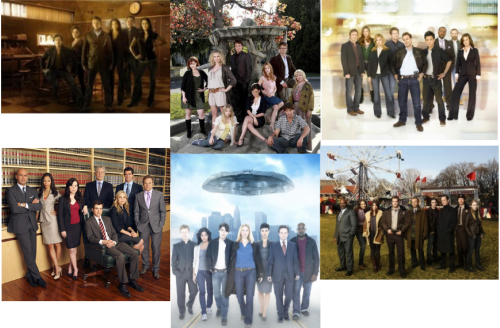 By including actors of color at all, although they are marginalized, the networks can tell groups such as the NAACP that they are adding representation from non-white groups, without making any real social strides in terms of actual race-blind casting. Perhaps publicists and photographers are following guidelines that say there artistic reasons for the placements of characters of color in photographs that have to do with balancing light and dark, or rules of formal composition, or perhaps because all the black men are the tallest actors in the shot they should be in the back. Even so, it would seem to make sense for the networks to violate such compositional rules to avoid reinforcing negative stereotypes that have been in force for so long.

Many Americans proudly think of themselves as tolerant and may consider the country post-racial, so blatant prejudice is rarely displayed in the mainstream. However, the fact is that many white people are unaware of the frequent and subtle racism that many people of color still experience. This, coupled with marginalization, lack of representation, or negative stereotyping of people of color in the media can result in viewers having a narrow and inaccurate view of an entire group.

“Jessica Alba is our Must Girl of the Summer : The 25-year-old starlet is on the brink of Hollywood domination”. Entertainment Weekly. June 30, 2006