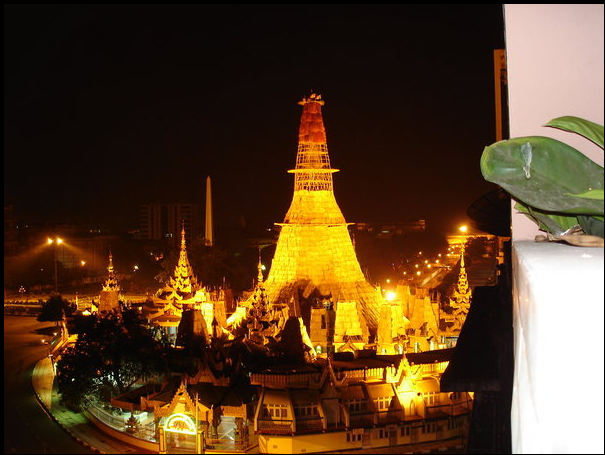 Burma (or Myanmar) is not a place that people normally associate with the glamour of film stars, or the fun and frivolity of celebrities, unlike in neighbouring India or Thailand. But each year the very matter-of-factly named ‘Myanmar Economics Import/Export VCD’ company produces a disk of the year’s most memorable television ads, showcasing some of the many Burmese celebrities on television at the moment. As a testament to the catchiness of the ads, disks have become so popular that they can be bought on street corners in Yangon for about 1000 Kyats (US$1). Though advertising in Burma is highly vetted for political content, much like film and print media, the samples featured show a surprising array of entertaining themes and ideas. Much of television advertising, in some way or another, draws upon the profiles of versatile Burmese celebrities to engage and build brand value.

As there is a distinct lack of foreign content (and product) in Burmese commercial culture, local celebrities have become a mainstay in the ad industry, giving individual campaigns both a degree of credibility and personality. Without the resources of international advertising and market research companies, Burmese directors also lack the financial support available to agencies in other regional cities. Production values inevitably suffer – sound and image quality can vary from ad to ad, and campaigns can appear haphazard and uncoordinated. This does not take away from advertising’s local appeal. Most advertising promotions and story narratives, for instance, use movie stars, footballers, singers and other famous people, who become associated with local products and places advertised on TV. And as private and government advertisements are mixed in together, celebrities play a politically complex role in their advertising appearances.

Celebrities perform a range of different social, cultural and political functions. In Burma their social and cultural roles are no different, though they have the added burden of maintaining an identity within a politically repressive and highly media-controlled society. In this environment, advertising provides celebrities with a short-term financial reward, and an opportunity to further promote their brand image. Though some actors have used their fame to voice criticism against junta policies, most see advertising in practical terms of maintaining a career. Many live near the relatively small Yangon CBD, in some of the few middle class (by Burmese standards) suburbs, where they may find it difficult to maintain anonymity. It is not uncommon see singers and actors in the street, during social encounters or even whilst they are shooting a new TV commercial. The localness of famous people in Burma, in this sense, gives their patronage an extra sense of familiarity in advertising work. 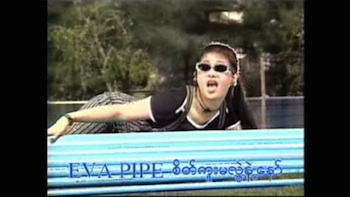 Celebrities signify both modernity and tradition in Burmese advertising. Actors and singers frequently promote products like traditional medicines, make-up and clothing, as well as mundane household items, such as PVC piping, paint, batteries, toothpaste, paper and soap. ‘Luxury’ products like jewellery and restaurants are also advertised, alongside less glamorous government products and utilities such as banks and factories.1 Restaurants fall into the ‘luxury’ category, which combine both modern and traditional motifs. The Golden Prawn restaurant (Shwe Bazun) ad, for instance, has a young couple (Htet Htet Moe Oo and Dwe) celebrating their wedding with doughnuts and cake, and then later donating food to monks in a Buddhist ceremony. Adverts for jewellery also combine signifiers of luxury with tradition, such as the Solid Gold (Shwe Zin) commercial, again featuring the actor Htet Htet Moe Oo, who this time is clad in an excess of gold bangles, diamond rings and a traditional dress and tiara, shot in soft focus as she sings to the camera. Apart from the government ‘public service’ announcements, these ads convey aspiration through a combination of both modern and traditional images.

The vast majority of ads focus on everyday items of necessity like water, medicine, batteries, paper and soap. In a Western context, the celebration of ordinary household products via the singing and dancing of celebrities may appear a little outdated – perhaps over the top. But in Burma they are quite normal, and part of the local celebrity-building process. My favourite is the Eva Pipe ad (see below), which mixes both government-style manufacturing footage with glam-pop style singing and frolicking. Htet Htet Moe Oo can be seen singing to the camera about the reliability of the company’s rather phallic plastic pipes. In the next ad, the actor Khine Thin Kyi sings her praises of OK Paint, which she claims makes the house look beautiful in any colour. The OK Paint ad is sung to the famous ‘Do Wah Diddy Diddy’ tune of the 1960s, and both have karaoke subtitles to invite the viewer to sing along.

There is an obvious kitsch value to these ads. Karaoke, dance, elaborate costumes and a bit of acting can be pieced together to sell any product. It is a real slapdash way ads are produced, even though certain levels of consistency are maintained. There are a couple of reasons for this. Firstly, without large-scale investment companies have few resources to produce anything different; local businesses also don’t make much profit, so the investment for greater production values is not important. Likewise, without exposure to foreign advertising or products, audiences are also more comfortable with local celebrities. And, lastly, producers are weary of upsetting fussy government censors, and so make very conservative decisions as to what kind of material will gain approval. This makes for a very amateur-looking industry, but one that is rich in celebrity culture and local references.

Even though there is a consistency about production values in Burma, some television ads have become what we may call ‘postmodern’, self-consciously melding different genres and styles. One of the most sophisticated ads of this type is for Arrow, a brand of writing paper – which features five of Burma’s most famous actors, including the country’s highest paid comedian, Yarzar Neywin. 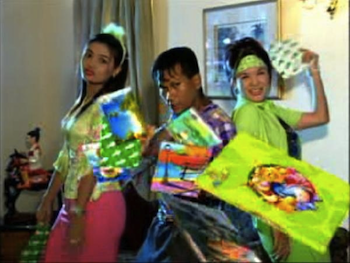 The ad begins with children singing about Arrow to the ‘Old MacDonald’ theme, with a blocky cartoon animation hailing the brand name. The next scene takes place inside a plush living-room, with an unhappy looking young woman sitting with her parents as they negotiate the terms of their daughter’s marriage to an edgy looking young man sitting across the table. The father awkwardly rejects the dowry offering. All seems to be lost, until the father spots an ad for the Arrow notebooks in the paper. And then, right on cue, the famous sweat-banded arm of Yarzar Neywin breaks into the frame to place a new dowry offering on the table. He reaches into the box and pulls out the Arrow notebook. When he explains that he’s the company boss, the daughter pays him a smile. Then a freeze frame snaps a wedding-like picture of the two, and the product name appears over the screen. Some music and rapping signifies a third sequence in the ad. Lighting transforms the boring Burmese household into a nightclub scene, and all of the actors begin singing the virtues of the product – ‘good for students, good for business, always reliable, flex your muscles with Arrow’.

It’s an exciting ad – all for the rather mundane product of a blank-paged notebook. Such celebrity appearances signify fun and entertainment, and the Arrow ad encapsulates this in a particularly postmodern way, drawing the message out into three separate segments. The ad does not discuss the virtues of the paper, but self-consciously promotes the brand’s credentials with a certain sense of style, relating the aspirations of celebrity culture with the ordinariness of writing paper.

By contrast, the more conservative style of advertising in Burma is produced by the government, and their products are usually banks or factories. A number of banks incorporate computer graphics in their advertising, in an attempt foster a technologically sophisticated image, and dispensing with celebrity endorsements. The Asia Wealth Bank (AWB) is one such commercial, which begins with a computerised map where images of computer screens represent the different branches across the country. The voice-over claims that the bank is one of the first to offer electronic transfers, a claim which seems farcical given that Burma has less than 5000 internet connections, and ordering foreign currency is illegal. Bank ads also invariably show large piles of cash which, although is necessary for living in such a hype-inflated economy, deems the electronic banking/ATM concept a little problematic. 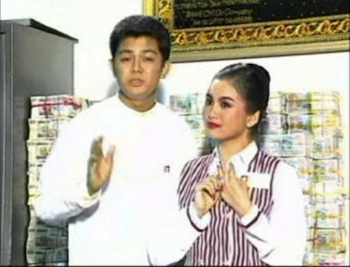 The Universal Bank ad demonstrates a different style of government advertising, using two well known celebrities to shore up its credibility. The ad shows a young mother and father explaining to their son and daughter the importance of financial planning. It is a simple ad, but inter-textual knowledge of Kyaw Thu (who plays the father) may compromise his endorsement. Over the past decade, for instance, Kyaw Thu has generated public interest by offering funeral services to poor families in Yangon. When this venture was curtailed by the authorities, he maintained his opposition by opening small pharmacies, which could assist people who couldn’t afford medical treatment. Through his ongoing resistance to junta edicts, he has become known as an activist by trying to help poor people, and thus drawing attention to the junta’s poor record on human rights.

That such a celebrity would be chosen to represent a government institution seems strange, but in Burma it illustrates the somewhat ill-planned nature of advertising and brand management in general – both in terms of government and private ads. On the one hand, screening celebrities known for their known opposition to government politics may suggest a level of freedom not properly experienced by ordinary citizens. On the other, the use of open-minded and free-thinking celebrities also highlights a peculiar public relations battle the government always finds itself losing.

Politics and celebrity in Burma

From watching these ads alone, however, it may be tempting to think that Burmese celebrities play a very neutral role in the country’s politics. This is not true. Burma has one of the harshest laws against freedom of speech, affecting ordinary citizen’s right to voice criticism against government officials, politics and policies. A number of prominent celebrities have actively antagonised government censors. Zarganar (whose name translates as ‘tweezers’) is perhaps the most famous, most recently because of his public support for the protesting monks in 2007, for which he received a ten year prison sentence. At great personal risk, three of the actors in the Arrow ad (Yarzar Neywin, Htun Eindara Bo and Kyaw Hein) all evade official orders to travel and help refugees of Cyclone Nargis in 2008. Popular culture and national politics in Burma can seem worlds apart in such desperate times, but there seems little doubt that the popular success of celebrities is in part due to their ordinariness, which sometimes includes holding dangerous (for Burmese) political views.

Unlike directors, some of whom are commissioned to make pro-government films, celebrities mostly appear apolitical in their work, but occasionally perform subversive gestures off screen. In everyday life ‘acting normal’ entails avoiding any public criticism of the government, but in a public relations sense this is not always practically possible. Besides, Burmese celebrities need to protect their popularity, and that means not being seen to support a political entity so wildly unpopular. Celebrity careers entail the promotion of ordinary aspirations in advertising, containing the voices of a liberal-minded society waiting for its time to truly shine in the limelight.