We Have Met the Fans, and They Are Us: In Defense of Aca-Fans and Scholars
Catherine Coker and Candace Benefiel / Texas A&M 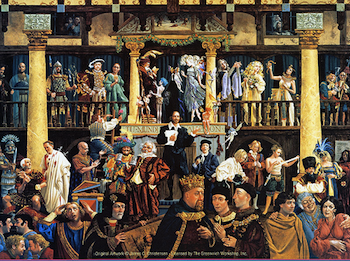 Scholars engage as fans and as critics

At a recent conference we attended, we listened to several otherwise promising papers that all began with the statement, “Now I am not a fan…” The speakers each then proceeded to discuss the texts at hand, and many of them made egregious errors—of fact, of character description, of key details which displayed a lack of knowledge of the material referenced. As any good fan will tell you, this does not happen in trufan circles where such mistakes (if they occur!) would invite derision or not-so-subtle correction with a helpful list of sources attached. It is worth noting that, at this very same conference, we were also in attendance with colleagues who demonstrated an ample, masterful knowledge of their chosen subjects and texts, but who were likewise wary of the “aca-fan” appellation. Why is this, we wonder?

Throughout the history of literary and cultural scholarship, there have always been people who are “fans” of their subject area. Shakespeare scholars, Milton scholars, Melville scholars, and so forth, have all engaged with their chosen narratives at a deep and profound level. They hold an intimate knowledge of the history of the author (and in fact, much literary history is the result of obsessive digging for obscure biographical materials), of the work, of the cultural context through which the work was founded, and they know the selected text itself with all the thoroughness and passionate interest of a biologist who has discovered a new organism, desiring to know it down to the cellular level. These people are fans, whether or not they wish to claim the title. Indeed, it takes a unique, fanatical (!) level of engagement with the material in order to make thoughtful academic study even possible, considering the years of one’s life necessary to devote to obtaining advanced degrees and writing theses and dissertations. Academics, like it or not, are fans.

It is only with the current rise in study of contemporary popular culture texts that the term “fan,” with its negative and derisive connotations, has been applied to those passionate about their subject areas. If you look at the history of fan studies, stretching backwards in time to the earliest fan histories as written in the late 1940s by Science Fiction fan-scholars, you will see a desire and an attempt to uncover and to preserve knowledge in fields that would not be viewed as legitimate for academic study for decades to come. Were it not for such fan-scholars, such as Harry Warner Jr. or Sam Moscowitz, then the earliest documentation of some areas would be lost entirely. Academic analysis of newer media forms, such as film, often lags behind its source material as well. Critical film journals with serious writing about film, were not published until well into the 1960s—many decades after the cinema was invented.

The first studies of media fandom were conducted by academics who often claimed not to be fans, yet nonetheless displayed a deep intimacy with fan culture and practices, such as Camille Bacon-Smith, Constance Penley, and even Henry Jenkins at the first. Early studies were submitted in the guise of ethnographic surveys, often looking at fans in a tone not dissimilar from that used with the study of exotic and primitive cultures in some distant land. Questions like “How do you select your leaders?” were not too far removed from questions like “Explain the mating practices of your tribe.” Despite this early and awkward phase, the burgeoning field of fan studies has become one that is steadily rising in both prominence and in interest. Conference papers, journal articles, and a multitude of book-length studies have shown that academics are increasingly aware of fan engagement and practices with regard to popular media texts.

The question is still occasionally raised whether the fan academic can function objectively as a scholar while concurrently in an atmosphere of deep engagement with other fans. Is it possible or even necessary to maintain critical distance from a text while simultaneously discussing it with deep affection and even love? If one is tempted to shrug and answer, “Go ask a Trekkie,” we respond with “Go ask a Beowulf scholar.” Both texts involve a language removed from our own, a lengthy history of the text with multiple iterations and exhaustive commentary, and a tightly-knit group of followers who expect a high level of engagement and who will not tolerate sloppy errors or ignorance of the source material. 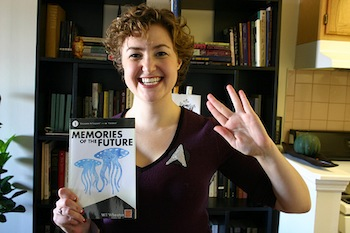 The question, then, is not whether the engagement of an aca-fan is appropriate in the study of cultural production, but how can the critical study of any text succeed without the passionate and knowledgeable participation of the scholar? Indeed, fans not only expect but will accept nothing less than clearly delineated arguments with reams of citations to back up any and all assertions. A popular misconception among some academics is that within the fan community, no criticism of the beloved source text is allowed. This is not only patently untrue, but frankly, laughable, as five minutes spent on any respectable fan board will attest. Fans will quickly target and exhaustively analyze any lapses in continuity or characterization in their text with a thoroughness that would make CIA investigators, let alone scholars, weep in envy.

This is particularly true of source media created in the last decade, as the omnipresence of the Internet has facilitated both the rapid communication of fan-to-fan as well as of fan-to-creator. Communal spaces like websites, chat rooms, social networks, and other electronic havens allow for the global participation of fans with the source text. Emails flow freely from fans to authors, and many still consider the old truism that “one letter sent represents ten that were never written” to apply. One can see this take hold when watching television series whose characters and storylines will frequently “give fan service” in homage to the people who are essentially paying the bills.

If multi-million dollar conglomerates are willing to take the fans seriously, why aren’t academics? Fans are no longer considered to be the pale-skinned geeks living in their mothers’ basements, hunched over their mint-condition comic books and day-old empty pizza boxes. Fans are everyone, everywhere. They are business men, they are career women, they have families and children. They are writers and artists themselves. They are editors, filmmakers, and webmasters. They are scholars. They are us.