“We are all together:” Fan Studies and Performance
Jen Gunnels / New York Review of Science Fiction and M. Flourish Klink / MIT 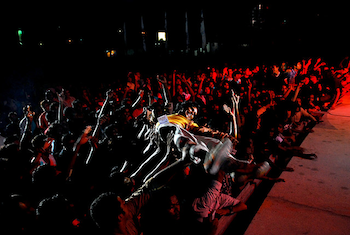 In the moment: fandom or scholarship?

Fandom is a performed set of practices. It is something that one does. This fact firmly links it to the concerns and methodological practices of performance studies. Fan studies is fraught with a number of issues based in researcher identity—especially in conducting and publishing fieldwork. How should the researcher identify themselves in relation to their subject? Should they resist or embrace identification with the subject matter? These questions may largely be answered if fan studies scholars examine the practices and methodologies of performance studies and its related fields. The situation is extremely complicated, and yet, it’s ultimately very simple. The question of participation in and through the body is vital to a greater understanding of the subject if and when possible. That this is called into question at all seems a bit silly.

Performance studies itself has had a difficult birth and remains misunderstood in many respects. Kurt Lancaster offers one of the best definitions of exactly what the field encompasses. “Rather than inventing its own discipline, performance studies uses already existing methodologies in new ways. I applies theories from linguistics, semiotics, philosophy, anthropology, Marxism, feminism, among many others in order to further understand human behavior as, in, and through performance.”1 Dealing as it does with live bodies, performance studies owes a great deal, of course, to theater, but it also borrows a great deal of its methodology from anthropology and ethnography. There is a very good reason for this. Ethnography has called for the researcher to experience the culture under study as much as possible through the body. Other subsequent researchers have brought this idea with them and its achieved perhaps the highest recognition for its utility in the field of performance studies.

This provides an excellent intersection with fan studies and its research concerns. Bronislaw Malinowski, the father of modern ethnography, recommended full participation as well as the traditional position of observer to fully understand the culture being studied2. Following this principle, ethnographer and performance theorist Dwight Conquergood reiterates: “Recognition of the bodily nature of fieldwork privileges the processes of communication that constitute the ‘doing’ of ethnography: speaking, listening, and acting together”3. Fan enterprises mirror these activities as Jenkins, Fiske, Helleckson, and others have documented. Even so, the tensions remain between the researcher and the subject, methodological rigor, and the subject subsuming the researcher.


Part 1 of 6: Conquergood’s “The Heart Broken in Half”

The tension, however, is not particularly new, nor has it gone unrecognized. The work of Victor Turner, Clifford Geertz, Dwight Conquergood, and Richard Schechner shows that methodological rigor and representational ethics can be defined and maintained, even in tricky circumstances. As Victor Turner has noted, the Cartesian dualism separating the subject from the object casts an understanding of the close interaction between body and mind as something irrelevant to research. He and the other researchers mentioned above possess a collective belief in the necessity for the observer to participate within the community being studied reintegrating the importance of embodied experiences in research practice. Performance creates a reflexivity allowing the subject/object dichotomy (either/or) to become a simultaneity (both/and). Similarly, the concept of imaginary communities posited by Benedict Anderson—with reference to the sociological studies of Henri Tajfel and Erving Goffman—can help the fan studies researcher pick apart the complex relationships between cultures and subcultures, defining their relationship to their subjects more successfully.

Those who denigrate close work or identification with fandom call to mind early detractors anthropology/ethnography and the very white, very Western stigma/fear of “going native.” That somehow by experiencing the subject on the subject’s terms all else will be eschewed and our cultural clothing rent as we become intellectual savages running naked through the streets beneath the Ivory Tower. That is not to that there isn’t bad research is out there. There is. Some scholars do lose themselves in the work and the results are navel gazing monographs more representative of the scholar producing them than the subject under scrutiny. 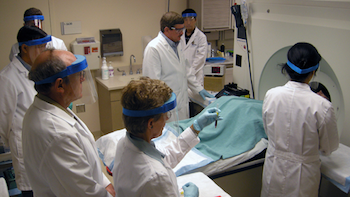 An excellent example of how identification with the subject through bodily participation comes from a documentary aired on National Geographic’s Explorer titled “Fatal Insomnia.” One segment caught my particular attention. It narrated the work of a psychologist conducting studies into the experience of torture victims. He took the opportunity to participate in a three day voluntary experience of torture conducted by Delta Force. He would be kidnapped and subjected to sleep deprivation torture. While it was a voluntary situation and he knew it would stop within 72 hours, he still gained a far greater understanding of a torture victim’s state of mind—something only gained through the body in similar situation—than he would researching in a library or by maintaining strict objective distance. His insights into the actual experience trump the suppositions of other researchers who do not choose to participate in such a manner. While this represents an extreme example of bodily knowledge and a researcher’s proximity to the subject matter, it remains a valuable illustration of the potential insights grained through bodily approaches.

Current advances in neuroscience, making inroads with many diverse subjects within the humanities, further complicate an understanding of researcher participation. As I pointed out at the beginning, fandom is a doing, something that is experienced, no matter what the level of participation is. As humans, the body is the site of experience. Even the literary scholar must experience the text through her eyes, while the act of reading may produce a visceral, bodily response. Bryan Reynolds points out, in Transversal Subjects: From Montaigne to Deleuze after Derrida, “consistent with Gallese’s hypothesis, Tanya Chartrand, et al. claim that thinking about a behavior (as neurologically modeled) leads to performing it . . .”4 In other words, to an extent, thinking about a physical act produces neurochemical reactions in the brain similar to those produced by the actual act. Thinking can be tantamount to doing.
The concept of embodiment is of interest and can be of use to the fan scholar—embodiment both literal and figurative. Through an understanding of and respect for the ways that culture is inscribed upon the body—whether that body is real or virtual, whether it consists in flesh or in a username—fan studies researchers can come to terms with their concerns, and the concerns of others, about objectivity, identity, and representation.