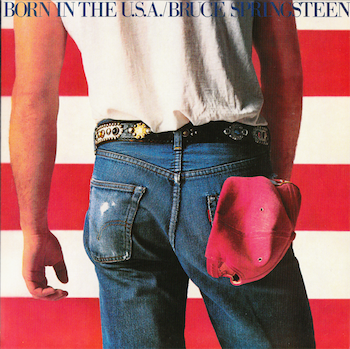 “Born in the USA” (1984) is at the top of all internet lists of “most misunderstood songs.” Its critical look at the treatment of Vietnam Veterans was taken as a patriotic anthem from its release in 1984 to the present. Other notable examples of alleged misuse of music include the Beatle’s “Revolution” used in a Nike commercial, Devo’s “Beautiful World” and “Freedom of Choice” used in Target and beer commercials, Janis Joplin’s “Mercedes Benz” used in, you guessed it, a Mercedes Benz commercial. How can this happen? For fans who believe they know the “true” meaning of such songs, the explanation lies in the stupidity or laziness of audiences who haven’t taken the time to listen carefully. For cultural theorists, the explanation is that texts are always polysemous, audiences use their own interests and ideology when constructing meaning, and there is no way to determine the “real” meaning anyway.

Both of these explanations are compelling, but I think that artists have more control over the interpretation process than is commonly believed. In this essay, I look at some things artists have done that make their songs amenable to misuse and how artists have tried to reassert control over such songs.

Some of the responsibility rests with the songwriters. “Born in the U.S.A.” illustrates how song structure and ambiguous lyrics open a text up to contradictory interpretations. The verses describe the bleak future that awaited veterans returning from Vietnam and the chorus repeats the slogan “I was born in the U.S.A.” four times. The slogan, when extracted from the verses, is ambiguous and can be placed into an entirely different set of signifiers, such as a campaign speech by Ronald Reagan.1

Throughout his career, Springsteen has struggled with what he calls the “co-opting” of his music. When asked his thoughts about the Ronald Reagan incident, Springsteen demonstrated a good understanding of why it happens:

My music, it’s often been a football . . . where I’d occasionally have folks from the far left to the right wanting to use it as “this represents us and our ideas.” And that’s just something I live with and I always have a chance to go out on stage at night and say my piece and sing my songs. In my songs, the spiritual part, the hope part is in the choruses. The blues and your daily realities are in the details of the verses. If you look at all my songs—Badlands, Promiseland, Born in the U.S.A.—the spiritual comes out in the choruses, which I got from Gospel music and the church. The blues and the details of what the song is moving to transcend are almost always contained in the verses. But people use pop music in a lot of different ways. So it’s an ongoing struggle, what can I say?2

Springsteen seems resigned to an explanative posture. He recognizes that the very structure of his songs contributes to their cooptation, but continues to “go out on stage at night and say my piece and sing my songs.” Despite a career filled with explanations on stage and in interviews, “Born in the U.S.A.” still serves as a patriotic anthem for many.

Could Springsteen do better? Consider a very different example from a few years earlier. In 1981, the Dead Kennedys began to worry that neo-Nazis were digging some of their songs, such as “Kill the Poor” and “California Uber Alles.” Their response was to issue a clarification in the form of a new song, “Nazi Punks Fuck Off,” rather than trying to explain the old songs.


The Dead Kennedys issue a clarification

In “Nazi Punks Fuck Off,” both the verses and the chorus are unambiguously critical of Nazi Punks. This leaves few easily extractable phrases, though Phil Donahue once truncated the song title to “Nazi Punks” when citing examples of neo-Nazi influence in punk.3 To avoid this type of misinterpretation, perhaps DK should have gone with “Fuck Nazi Punks.” Donahue’s gaffe aside, DK chose an effective strategy to clarify their intentions and exclude unwanted audiences. The song is a direct statement of their beliefs. No sarcasm, no satire, no question that the surface meaning is the real meaning, though most of their other songs are highly sarcastic in tone. Perhaps Springsteen could have taken DK’s approach and recorded “Fuck Reagan” as soon as he heard Reagan talking about him on the campaign trail. Obviously, that would have dramatically changed Springsteen’s career.

Most alleged misuse of songs comes not at the hand of politicians, but advertisers. Numerous Devo songs have appeared in commercials, often in ways that appear to directly contradict what the band stands for. For knowledgeable fans, the meaning of Devo songs is shaped by their understanding of the band’s concept—devolution. Beginning with such an understanding, songs like “Freedom of Choice” and “Beautiful World” appear to comment on how consumer culture represents the devolution of the human species. From such a perspective the songs appear obviously sarcastic, but to others it is probably just weird.


“Beautiful World” in a Target commercial

Financial realities have encouraged Devo to embrace rather than resist the commercial use of their songs. Devo does not own the rights to much of their music, but can make money by re-recording them for commercials, as explained by Devo founding member Jerry Casale in a 2003 interview:

Today, when people use Devo’s music in commercials, they either completely miss the point or on purpose, excise the irony. Target used “Beautiful World,” and of course, left out the line “For you, for you, but not for me.” They just made it a beautiful world straight up. . . What’s funny is, we never made any money, and only through publishing now, are we making money, ironically for the wrong reason. But built into Devo was that comment on how society works and how people see things different ways and there is no one explanation of reality and that people do not share one idea or logical idea of reality. This just proves it. We don’t feel bad about the little bit of money that trickles to us now that we never got in the first place because they used these songs in a terrible way. It’s almost more subversive because you go, “This can’t be, it’s all wrong.” It’s almost like Dada, it’s like something the artist Jeff Koons would do. By misusing it so badly, they’ve created something that amuses us, entertains us.4

If Devo wanted their message understood, they certainly could have selected a better strategy than saying the exact opposite of what they mean and relying on the audience to do their homework about the theory of devolution. But Devo had an incentive to work with advertisers and promote multiple interpretations of their message. I don’t agree with Jerry Casale that the advertisements were subversive of Target’s actual purpose, though I share his feeling of amusement and entertainment at seeing the songs used in a “terrible way.” I think about it often when I’m shopping at Target.