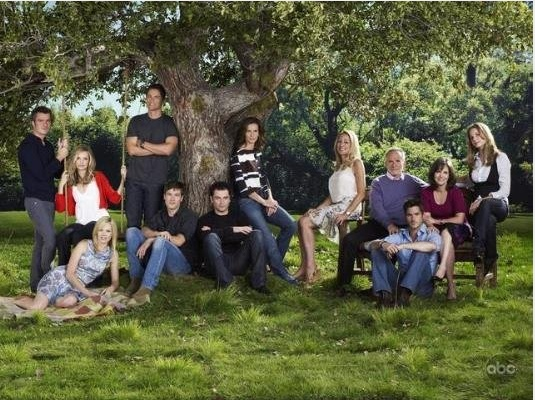 The cast of Brothers & Sisters.

In my last column for this volume of Flow, I want to address questions of queer temporality and narrative closure in the season four finale of ABC’s family drama Brothers & Sisters. As one might expect of a season finale, “On the Road Again” resolves some narrative arcs and establishes new ones for the upcoming season. I’m particularly interested in the beginning of a new storyline for one of the central characters, Saul Holden, who learns that he is HIV-positive. This storyline addresses queer temporality in multiple, contradictory ways—relating to the beginning and ending of narratives, life cycles, and historical moments. 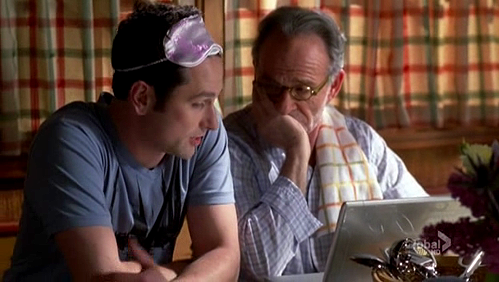 After finding out that one of his previous partners is HIV-positive, Saul (right) and Kevin (left) discuss the situation.

Saul’s discovery of being HIV-positive might seem like an odd choice for opening up a new narrative arc. After all, for the longest time, this discovery set a character on a journey toward an inevitable death. While televisual representations of HIV-positive gay men have moved away from aligning HIV/AIDS with (impending) death, traces of this alignment linger. In “On the Road Again,” numerous characters reassure Saul that he still has a long, healthy life ahead of him. Indeed, characters’ dialogue includes the phrase “living with AIDS,” thus acknowledging a major victory of AIDS activism, namely shifting AIDS-related terminology from focusing on death to focusing on life.1 At the same time, numerous signs of aging are associated with Saul: he talks about his new hearing aids, explains he hasn’t had sex since the Hindenburg exploded, and reveals his birth year, 1938, when calling his doctor about his test results. Thus, while Brothers & Sisters strives to avoid the representational pitfall of aligning HIV-positive gay men with death, Saul is nevertheless portrayed as an elderly man with potentially fragile health.

This alignment of Saul with images of being elderly is compounded by the presence of a young gay couple, Kevin and Scotty, who are in a monogamous, long-term relationship. Throughout all seasons, Brothers & Sisters calls on generational difference as a key way of representing Saul, Kevin and Scotty’s varying attitudes toward being gay. In the season four finale, generational difference functions both as a way of distinguishing Saul, Kevin and Scotty’s experiences as gay men and as a more general way of demarcating the representation of past and present gay lives and practices. Saul is portrayed as a member of an older gay generation that lived through the heady days of frequent partners and unprotected sex in the late 1970s and early 1980s, whereas Kevin and Scotty belong to a “post”-AIDS generation that values monogamy and a normative way of life.2

Kevin, Scotty, and Saul argue about Saul’s hesitancy to get tested for HIV.

This alignment of specific temporal modes (past and present, old and young, outdated and contemporary) with specific queer practices (e.g. “promiscuous” vs monogamous) becomes most obvious in an emotionally-charged confrontation between Saul, Kevin and Scotty. After Saul discovers via Facebook that one of his former partners has been HIV-positive since 1988, Kevin and Scotty repeatedly encourage Saul to get tested for HIV. Saul eventually confronts Kevin and Scotty about the pressure that they put on him:

Saul: “Do you have any idea what you’re asking of me? Do you? This world the two of you live in, where everything is so easy and so much is possible. You have a surrogate carrying your child! You’re married!”
Kevin: “Technically, we’re not married.”
Saul: “Oh, Kevin, excuse me, I’m so sorry, you’re domestic partners, whatever. When I was your age, I just hoped I wouldn’t get arrested when I walked into a gay bar.” 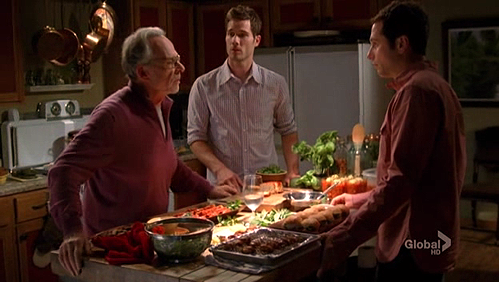 The emotional confrontation between Saul, Scotty, and Kevin.

In this scene, Saul’s life and experiences as a gay man are associated with the past while Kevin and Scotty’s experiences are aligned with the present (and, via the mentioning of their unborn child, with the future).3 It is not surprising at all that the AIDS crisis of the 1980s functions as temporal marker dividing these two generations. The discovery and impact of HIV/AIDS is one of the major turning points in LGBT history, after all. As with many historical turning points, locating and narrating the origin and impact of HIV/AIDS is a complex and contested historiographical undertaking. Brothers & Sisters relies on a normative way of narrating the significance of the AIDS crisis. Via the contrast between Saul, on the one hand, and Kevin and Scotty, on the other, the series privileges a moralizing discourse that identifies Saul’s experiences as part of a shameful past and portrays Kevin and Scotty’s life choices as exemplary, or, at the very least, as preferable and appropriate to the current historical moment.

In addition, the confrontation between Saul, Kevin, and Scotty also underlines the progress gays and lesbians have made in terms of gaining equality. While Saul had to fear arrest when visiting gay bars in his younger days, Kevin and Scotty live out-and-proud lives as domestic partners. This notion of steady progress for and increased visibility of the LGBT community is also often associated with the AIDS crisis of the 1980s. Mainstream historical accounts frequently depict the late 1980s as a moment in which “mainstream” America underwent a change in attitude toward the gay and lesbian community; this change in attitude subsequently led to more equality for gay and lesbian Americans.4 What is often left out of these histories is that this (slow) change in attitude went hand-in-hand with a normalizing discourse that advocated couples like Kevin and Scotty as representatives of a new way of gay life. Queer identifications and practices that fell outside of this norm became reprehensible reminders of a past that gays and lesbians should leave behind. From this point of view, the late 1980s constitute a collective moment of “growing up,” especially for gay men.5

The proliferation of gay and lesbian media images during the 1990s played a major role in solidifying this normalizing divide between a shameful past and a much-improved present by providing numerous images of white, middle-class, gay and lesbian Americans. Brothers & Sisters itself is a program that continues to advocate this particular discourse of gay and lesbian representation by continuously emphasizing the differences between Saul and Kevin and Scotty’s experiences and choices. Moreover, when Saul, during a conversation with his sister, links his promiscuous youth to a lack of role models, it isn’t too difficult to imagine Brothers & Sisters patting itself on the back for doing a much better job of providing role models to confused gay youth. In this moment, the series simultaneously inserts itself into a progressive LGBT history and provides a way of interpreting this history. According to this logic, there was once a time when televisual role models were absent, leaving young Saul drifting, but queer television history has made great strides toward programming such as Brothers & Sisters—programming that ensures young gay viewers won’t stray off the (normative) path.

It is certainly a pleasant surprise to see a mainstream network drama such as Brothers & Sisters address the topic of HIV/AIDS in the LGBT community. But the series relies too extensively on a model of queer visibility centered on normative visions of generational and historical difference to challenge televisual tropes of gay men living with HIV/AIDS. In the upcoming season, it will be interesting to see if Brothers & Sisters continues to oppose Saul as elderly HIV-positive man and Kevin and Scotty as young parents to deepen the contrast between a shameful queer past and a bright “homonormative” future.