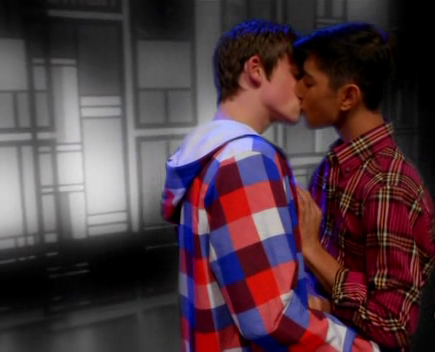 In my previous column, I explored the impact of FlashForward‘s cancellation on our understanding of the series’ depiction of queerness and race. In this column, I turn to another type of narrative closure typical of television, namely the ending of a long-running series, and investigate what potential it offers for representing queerness and race. Ugly Betty ended its four-season run on ABC in April 2010. Due to plenty of advance notice, the series had the opportunity (and imperative) to wrap up its major storylines during its final season (in contrast to FlashForward‘s late cancellation, which made it impossible to wrap up storylines).1 The coming-out storyline constructed around teenager Justin Suarez in the final episodes of Ugly Betty is particularly interesting in terms of closure, queerness and race. By finally confirming that Justin is indeed interested in boys, Ugly Betty resolved one of its most long-standing narrative mysteries.

The significance of Justin’s coming out oscillates between posing a challenge to the typical “Hollywood ending” of heterosexual romance and falling in line with the demands of post-closet (and post-racial) television. On the one hand, Justin’s developing relationship with fellow theater geek Austin goes against heterosexual closure: Justin ends up with a boy, not a girl (how far outside of heteronormativity this storyline falls is another question, of course). On the other hand, it confirms the impression that, according to Ron Becker, “all men on [post-closet TV] who are gay are out, and any man who isn’t out is obviously (and securely) straight—otherwise they’d be out.”2 In the final days of Ugly Betty, there is no room for Justin’s previously ambiguous queer identity. 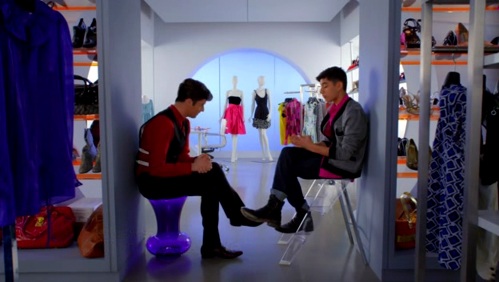 Not surprisingly, then, the Suarez family finds out about Justin’s newly embraced sexual identity even without the obligatory “I’m gay” from Justin (rather, Bobby caves to the persistence of Hilda, Justin’s mother and Bobby’s future wife). Eager to demonstrate their acceptance of Justin, the family decides to throw a surprise coming-out party replete with rainbow streamers and PFLAG brochures. Once again it is Marc who intervenes and calls attention to the problematic nature of the planned party. Marc explains that “it’s not about you being fine with it, it’s about Justin being fine with it.” Marc’s intervention calls attention to television’s tendency to shift the emphasis of queer storylines away from queer characters to their (straight) families.3 But once again, it is only the circumstances of coming out that are being called into question, not the act of coming out in itself. After all, Marc ends his party-stopping intervention by explaining that Justin will come out in his own time. While Ugly Betty actually narrates the pressure surrounding the decision of when and how to come out, the narrative doesn’t question that Justin’s coming out will (or should) happen. 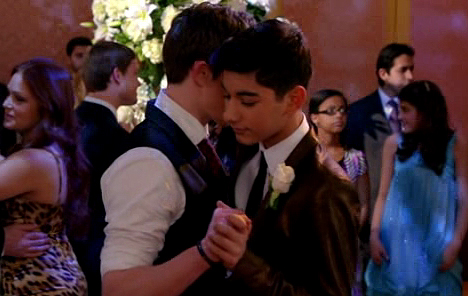 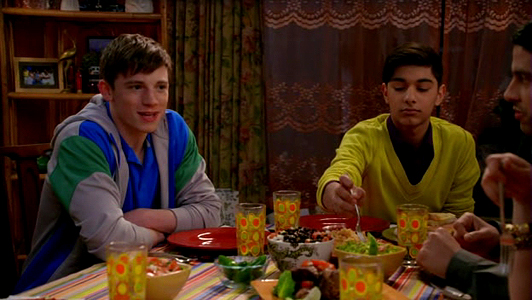 While Ugly Betty demonstrates some self-reflexivity regarding televisual coming-out tropes, it has a large blind spot regarding the interracial aspect of Justin and Austin’s relationship. The only remark about Austin’s whiteness appears in the series’ final episode, when, during a family dinner, Austin observes that he is glad to become “a part of this Latin family” to which Hilda replies, “We’re gonna spice you up so much you’re gonna forget you’re white!” Perhaps it is not strictly necessary for Ugly Betty to address the interracial nature of Justin and Austin’s relationship. The differences in their cultural backgrounds don’t seem to be on Justin and Austin’s minds—they are busy enough processing the idea that their sexual identity might fall outside the norm. Moreover, Ugly Betty projects the (too) comforting notion that Justin and Austin are part of a post-racial generation for which racial difference isn’t important anymore.4

Yet, the idea that race and sexuality, especially queer sexuality, are separate matters is one that has circulated in American culture for a long time and has turned attention away from interrogating how entwined discourses of race and sexuality are.5 Austin’s brief remark about being included in a “Latin” family and Hilda’s response about making Austin forget that he’s white seem like throwaway lines. But I think they reveal the labor involved in a post-racial outlook on TV and beyond. Racial or cultural differences might not be openly addressed, but they don’t go unnoticed (Austin’s awareness of the Suarez as a “Latin” family) and they need to be actively forgotten. This contradictory process recalls Justin’s coming-out storyline: a dramatic declaration of “I’m gay” seems unnecessary, but a definite confirmation of his gay identity still concludes his character’s final narrative arc. Instead of seeing these as mere parallels, I argue that the “forgetting” of Austin’s whiteness constitutes a moment in which a post-closet outlook merges with a post-racial perspective. Accordingly, both society and televisual representations have supposedly progressed far enough that racial and sexual difference doesn’t make a difference anymore. But this glossing over of difference crucially depends on a precise identification on which side of the dividing line between gay/straight and white/not white one falls.