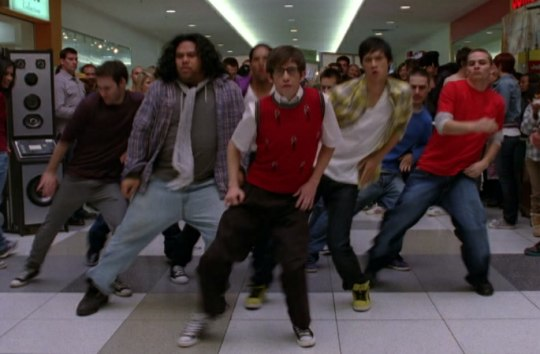 As a “Gleek”, a fan of the Fox musical comedy Glee, I have many favorite moments from the first season of the series. None, however, rival a musical number from the episode “Dream On,” in which Artie, the New Directions member who is in a wheelchair, daydreams about being able not only to walk, but dance with finesse. (It goes without saying that the representational politics of the number are problematic, as is often the case for Glee). The number, Glee’s version of Men Without Hats’ “Safety Dance,” is set in a busy indoor shopping mall, and the dancers that back up Artie, including some of the series regulars, spontaneously pop out of the mall crowd to join him. The virtual fourth walls between the series and its fans and between the show’s stars and its extras drop away as shoppers are suddenly dancers and others in the crowd enjoy the show, taking pictures and shooting video of the dance on their phones, with the scene in fact edited with that video footage included so that the fans’ POV is momentarily made central.

The performance is dynamic, surprising, seemingly spontaneous, and fun. Then after the last words of the lyrics are uttered, it ends, just as abruptly as it began. The dancers slip back into the moving throng of shoppers, Artie is back in his wheelchair, and it’s as if it never happened. In other words, the number is a brilliant flash mob dance and nod to the show’s fans, a truly gleeful surprise.

At the time I was already aware of Glee flash mobs popping up around the globe, but my appreciation for “Safety Dance” brought me back to explore the phenomenon. As readers may already know, flash mobs are described as such because they appear spontaneous, involve large numbers of people, and are “anonymous and playful performative interventions”1 that pop up suddenly in public locales, then disappear just as quickly. While they have historical roots in performance art and community-based ritual, the origins of the modern-day flash mob are often traced to Manhattan in 2003, when an underground group known as the Mob Project, using cell phones and other social media, organized a number of seemingly spontaneous, often absurd performative moments in public locations (hundreds of participants breaking into seemingly random applause, making bird sounds, or pretending to be frightened of an animatronic dinosaur in a toy store, for instance).2

As news reports and videos posted on YouTube publicized the trend and web sites and Facebook have been utilized to solicit and organize participants, larger and more elaborate flash mobs have emerged. While some still focus merely on surprising moments, as in the case of a light saber-fighting flash mob and “freezes” (in which participants act as if they’re frozen in time, a stunt originated in Grand Central Station and later recreated by thousands of participants in Sydney and later Paris),3 in recent years they have at times involved participants engaging in song and dance, such as in the case of flash-mob performances of songs from The Sound of Music and of Michael Jackson’s “Thriller,” a clear flash mob favorite.

In this regard, Glee’s feel-good music and premise of underdogs forming a community of performers make it appear tailor-made for inspiring flash mob dances and theatrics, and in fact videos on YouTube and elsewhere document Glee flash mobs performing in such disparate and far-reaching cities as Seattle, Columbus (Ohio), Dublin, Madrid, Rome, Tel Aviv, and Kuala Lumpur since the series debut in the U.S. in 2009.

What’s the flash mob craze all about? For one, flash mobs seem to appeal to the individuals who participate in and witness them, as noted by dance arts writer Doug Fox, because of “the compelling nature of spontaneous collective action”.4 I wish James Carey were still here to talk about his take on the rise of communal performance in this regard and the sense of community, if fleeting, forged among flash mob participants. While journalists and scholars often critique the lack of focus of flash mobs (as in Selina Schepers’ description of flash mobs’ “power of many, in the pursuit of nothing”)5; others have countered that while not directly political in focus, flash mobs illustrate that citizen resistance can quickly be organized and model one type of communal organizing.6 I also believe that flash mobs can reaffirm a sense of connection to one’s community and of the nurturing power of communal performance for performance’s sake, such as Carey (and the writers of Glee) might argue.

Admittedly such utopic notions don’t completely capture the nature of flash mobs today, however. Lost spontaneity aside as flash mobs increasingly involve rehearsal and pre-production planning, what about when flash mobs have been spearheaded by networks or companies with something to sell? It turns out that many of the Glee flash mobs that have taken place outside the U.S., including those that took place in Spain, Italy, and Malaysia this spring, were in fact organized by the FOX network affiliates in those cities to publicize and promote the series debut in those countries.7 How does that change the meaning of these performances, for participants or for observers?

And in other instances networks and film studios have now used flash mobs or at least borrowed some of their strategies for promotional purposes. FOX, for instance, organized a publicity stunt that they called a “stache mob” in early June to promote their series The Good Guys: actors in fake mustaches to resemble Guys star Bradley Whitford’s mustachio’d Dan Stark appeared at a busy Los Angeles intersection and in Penn Station in New York City, giving out coffee and doughnuts in the spirit of imagined notions of police officers, while flash-mob dancers performed in Times Square to promote the release of the film Bollywood Hero last year. Fans of the NBC spy comedy Chuck could perhaps be viewed as closer to an actual flash mob when they surprised crowds in several U.S. cities in April dressed as Nerd Herders to promote the renewal of the series. But it was arguably already the beginning of the end of the flash mob when the organizers behind a flash-mob performance of “Single Ladies” in London’s Picadilly Square in April 2009 were revealed to in fact be Beyonce Knowles and Trident, and when Suave staged a flash mob-esque, “hairography”-heavy dance performance in Times Square in March to promote their hair products.

So what separates an actual flash mob from its ideologically hollowed out, though perhaps equally spectacular facsimile? Of course spontaneity, but even more it would seem that a true flash mob is necessarily driven by individual, rather than corporate drives and goals (whether that individual goal is to get a thousand people sneezing at once or to surprise and entertain in a more substantial way, of course, might widely differ, however). In the case of Glee flash mobs that have posted video clips online, it was initially difficult to accept that many had not sprung up naturally, so to speak, because of fan enthusiasm for the performances and ethos of the series – which after all, is about the joy of performing and coming together as a community to do so. But can we blame networks and corporations for wanting to harness the joyful potential of the flash mob? What better way to inspire individuals to believe, like Artie, that what we see in our dreams might at times actually become reality – if only for a performative moment.