“That’s All I Intend to Share Right Now”: Adultery and Privacy in The Good Wife
Suzanne Leonard / Simmons College 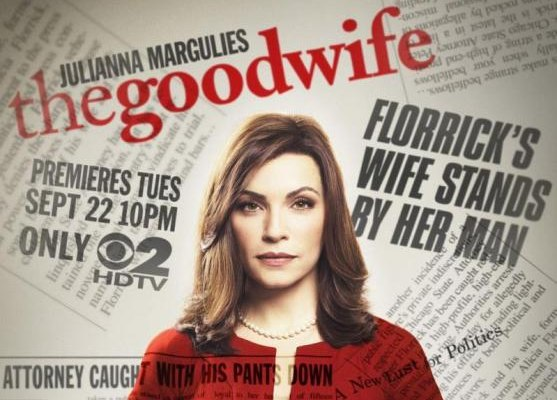 Though always a hot topic, the adulterous indiscretions of famous husbands and their accompanying ritualistic public shamings have been near ubiquitous in last few months. Directly on the heels of her Oscar win for The Blind Side, actress Sandra Bullock faced painful revelations about her husband Jesse James, who apparently had been carrying out a series of illicit affairs throughout their five year marriage. The ever more abject James was rendered a Nazi sympathizer and portrayed alongside his bevy of tattooed mistresses, while Bullock was martyred as the wronged wife, and surprise mother (!) who, in a shocking fakeout, surreptitiously adopted a daughter without the press’s knowledge. During the same period, and after his self-imposed hiatus following the exposure of his extramarital dalliances, a newly reformed Tiger Woods returned to the Master’s championship, complete with a Nike ad featuring the words of his late father, who asks him if he has learned anything. Recent reports suggest that a divorce from wife Elin is imminent.1 In the political milieu, Rielle Hunter, mistress of disgraced politician John Edwards and mother of his previously repudiated daughter, posed for a tasteless GQ spread in the April 2010 issue, and conducted an unrepentant interview where she cites Elizabeth’s wrath as instrumental to the breakdown of the Edwards’ marriage.2 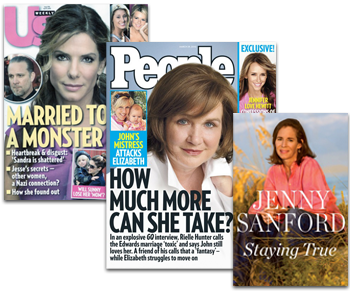 The many martyred wives of the past year

In such a climate, Julianna Margulies’s critically acclaimed return to television as The Good’s Wife’s Alicia Florrick, the humiliated spouse of a philandering and possibly corrupt politician, has had ample and even unexpected extratextual support since its release last fall. Self consciously patterned after the public scandals of Eliot Spitzer, Mark Sanford, John Edwards, Larry Craig, James McGreevy, and Bill Clinton, the show promised, or so it seemed, to reveal the private emotions and disappointments of the figure around which speculation in such cases often turns–the capable and often quite accomplished wife for whom the revelation of her husband’s betrayals may come only a few hours before that awful press conference. In The Good Wife’s suggestive reimagining of that moment, Alicia silently greets the cameras beside her husband Peter (in a stroke of brilliant casting, played by the ever elusive Chris Noth) and, when they are backstage, promptly slaps him across the face.3 In this case, however, the would-be victim quickly transitions into the star of the show.4 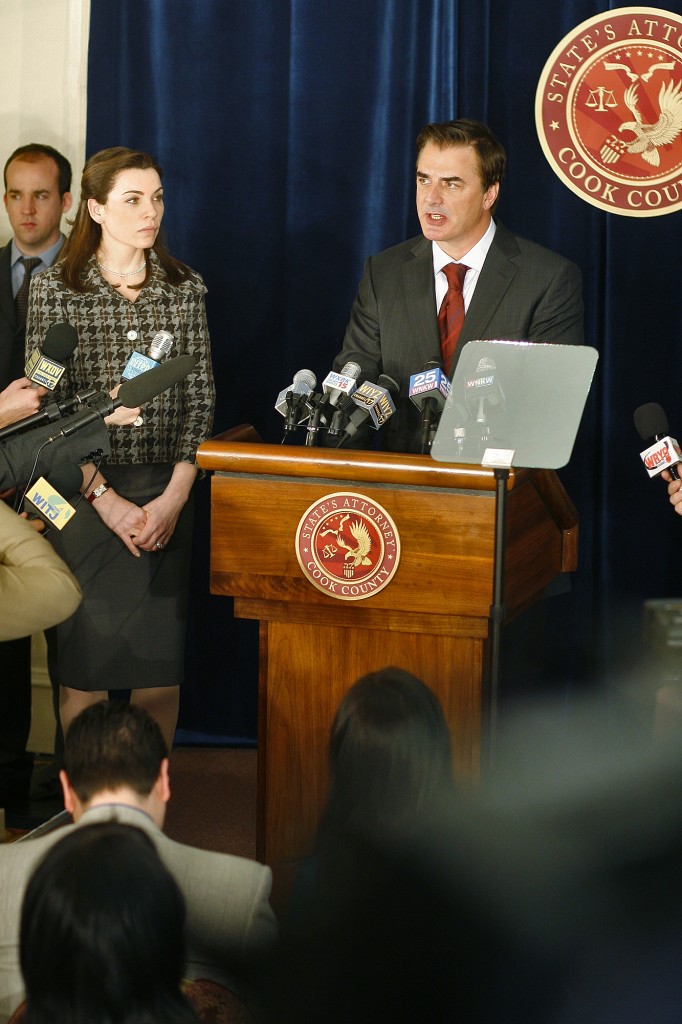 While the choice to figure the aftermath of infidelity as a procedural drama rather than domestic melodrama nods to the success of franchises like CSI and Law and Order—not coincidentally, another Noth vehicle—the hybridization of genre present in The Good Wife confirms not only that the procedural can be repurposed for the interest of female audiences, but also that in this fantasy anyway, male adultery can be instrumentalized in service of the female protagonist. In this rewriting, the scorned wife is cast in a different role altogether, emerging as the capable laborer who must take responsibility for her family’s financial well-being. While her former State’s Attorney husband sits in jail on charges of fraud and corruption, and is later released to house arrest, Alicia returns to work as a junior associate at Stern, Lockhart and Gartner, a law firm managed by Will Gartner (Josh Charles) a law school friend/ex-lover. (Even by the close of Season One of the series, it is still not quite clear which.)

Alicia’s work life and the compromises the law firm repeatedly makes in the face of a brutal economic climate consumes most of the show’s airtime, a move which suggests that the drama’s main concern is not Peter’s scandal, but rather the life Alicia constructs in the wake of it. In this, the show knowingly nods both to the real-life women rendered silent by their husbands’ scandals (Sandra, Elin, Elizabeth) as well as draws parallels with perhaps the most famous aggrieved wife of them all, Hillary Clinton, whose successful reentry into the public forum seems to have inspired the show’s positioning of male adultery as female opportunity, and the show has numerous times cited Clinton by name. The question of whether this comparison is meant to flatter, however, has became increasingly acute, as latter episodes have linked Alicia’s career advancement to a series of backdoor deals greased by her charming husband’s reputation, his allies, and his connections.

Much like Clinton, Alicia presents a largely impassive demeanor, an impression aided by the stoic and no nonsense persona that Marguiles brings to the role, a legacy of her early work on ER. Scripting her such, the show has increasingly dichotomized her handling of the affair to Peter’s, and in so doing, has offered surprisingly nuanced insights on the relationship between scandal, sexuality, shame, and privacy through its first season. If the American nation was once surprised by the serial adultery of men who built their reputation (and even, as in Spitzer’s case, their profession itself) on the appearance of a superior moral code, in a post-Spitzer era, the out of control male libido seems at once commonplace and yet still in need of disciplinary pageantry.

As witnessed most recently by the Tiger Woods media blitz, adulterers must still be put through the paces of a predictable script—remorseful confessions usher in a period of solitary repentance and reflection, and the adulterer emerges chastened and cured. Because, as Michael Warner reminds us, “the demand for more shame simply feels like morality”5 this familiar trajectory offers itself as a shortcut to absolution, though one wonders exactly who such a show is meant to convince. Scripting Peter Florrick’s adultery and attempted redemption in similarly calculating terms, The Good Wife is perhaps to be praised for the cynicism with which it approaches the economic and professional calculations that drive these public confessions. Peter’s image consultant advises him to seek counsel from a black pastor in order to better connect with a black constituency, and while Peter’s religious conversion is initially presented as plausibly genuine, later episodes suggest a more bitter truth. Feigning religiosity, Peter uses his and his family’s church-going as means to escape the confines of house arrest and stage a surreptitious meeting with a former colleague. 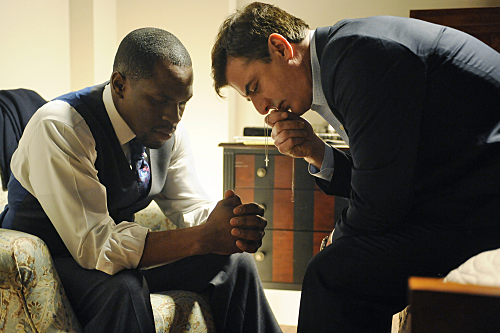 Alicia’s best weapon against a prying public remains the ferocity with which she, and the show itself, guards her private life, a strategy that deserves note in a postfemininst media culture wherein the women’s confessional seems her only recourse with which to meet public speculation.6 Instead, the show patently refuses to answer the questions its subject matter inevitably prompts, repeatedly refraining from divulging how Alicia really feels about her husband’s affair, what kind of marriage they had prior to it, whether she still loves Peter, and to what extent she seriously considered or is considering leaving him. The early episode “Stripped,” for instance, closes on the image of Alicia crawling into bed to listen to her husband’s sex tapes, but withholds their content as the screen fades to black. Such a strategy forces audiences to look through Alicia’s eyes at the sensationalistic news stories that accompany the revelation of the scandal, but more importantly, has the unexpected virtue granting her a private space in which to do so. By maintaining an ethos of quiet refusal, The Good Wife suggests that the problematics of desire, the sustainability of monogamy, and the capacity for forgiveness are open questions, inquiries that remain present, difficult, and uncomfortable. 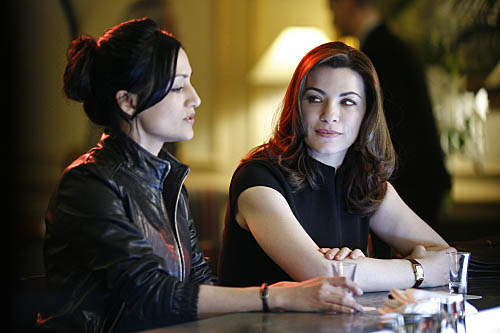 Trying to get answers

That the show is well aware of this strategy has also been alluded to repeatedly in character dialogue. When Kalinda (Archie Panjabi), the law firm’s investigator, asks Alicia in the pilot episode how she could stand by her husband at the press conference, Alicia notes that she too used to judge women who behaved similarly, and yet that when it happened to her, she was “unprepared.” Likewise, in the episode “Mock,” Alicia initiates a conversation with her children in order to clear the lines of communication between them. When, however, she is asked pointedly by her daughter about her relationship with Will, Alicia cuts her short by saying “that’s all I intend to share right now.” Rather than offer trite explanations for female psychology, the show resolutely insists on privacy for its female characters, particularly with respect to their sexual lives. Alicia questions Kalinda outright in “Hybristophilia” if she is gay (a speculation that has circulated all season, and has been answered only in the vague suggestion in recent episodes that Kalinda is bisexual) and Kalinda refuses to answer. “I’m private,” she says. Finally, when law partner Diane Lockhart (Christine Baranski) consummates her long flirtation with ballistics expert and sparring partner Kurt McVeigh (Gary Cole)—a duo that straddles political affiliations and has drawn comparison to the real life Mary Matalin/James Carville romance—in “Doubt” the encounter takes place entirely off camera, to the point that viewers were not aware the liaison actually happened until evidence of it comes out in court the next day.

In kissing and not telling, The Good Wife might be lauded for its work on female sexuality, and particularly its admission that desire often obeys a logic of its own, one that America’s Calvinist notions of life-long monogamy deliberately ignore. Peter’s arrival home from jail coincides with increasing sexual tension between Alicia and her boss Will, and Alicia shares a forbidden kiss with Will in the office in “Heart,” and comes home and unexpectedly initiates passionate sex with her husband.

Such narratives suggest that sexual beings are entitled to their personal proclivities, renegade acts, and subtle intimacies. As Ellen Willis wrote in regard to the Clinton scandal, in a statement that is still applicable today, “while sexual secrecy has broken down, sexual privacy has yet to be achieved”7 The Good Wife seems to be making strides in that direction, for when it come to its female character’s intimate lives, the show appears willing—for the moment anyway—to maintain their privacy and keep their secrets.