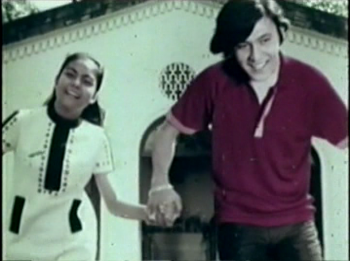 Nora Aunor and Tirso Cruz III star in the 1971 film, Guy and Pip.

The lack of a national audiovisual archive—a problem rooted in a dearth of funding, a lack of political will, and the deterioration of archival storage formats—is a pressing question for Philippine film and media studies.1 Many important films are unavailable on VCD or DVD; in some cases, the last known prints or master negatives of canonical Filipino films are available only at the British Film Institute or the Cinémathèque Française. When no extant 35mm or 16mm prints survive, a poor-quality Betamax or VHS copy suffices; failing that, a lost film must be reconstructed through secondary sources alone.2

On my first visit to the ABS-CBN Film Archives in 2005, I was told that their holdings represented roughly 2,400 of the mere 3,000 titles that survive from the inception of Philippine cinema (some 8,000 films are estimated to have been produced locally since the cinematographic apparatus was introduced in 1897).4 Maintained for broadcast content, the ABS-CBN Film Archive is not a public research collection; special permissions are required for visiting scholars. The archive’s temperature-controlled vaults, designed to preserve access copies on broadcast-quality video for the medium term and film prints and master negatives for long term storage, represent the best archival conservation measures in the Philippines. Temperature controls are able to arrest, but cannot reverse, the degeneration of films previously subjected to improper storage in a tropical climate. Such limitations notwithstanding, the ABS-CBN film archive is presently the most significant bulwark against the encroaching loss of the majority of Philippine cinema.

The fragility of the Filipino audiovisual archive–much of it on video–is primarily a problem of media obsolescence.5 In the 1980s, deteriorating studio era classics were transferred to Betamax by Mike de Leon, a major director of the Philippine New Cinema and grandson of the LVN studio founder, Doña Narcisa “Sisang” de Leon.6 In some cases, these flickering Betamax tapes are now the last extant copies of lost LVN films, themselves objects of restoration on digital video.

Marita Sturken observes that analog video was never intended to be an archival medium. Video was designed to allow consumer recording of television’s simultaneous transmission, offering the immediate pleasure of instant replay.7 So the irony of Philippine cinema’s pocket archives, like others around the world, is that works in the older medium of celluloid were archived on video formats that were newer but also inherently ephemeral. In the Philippine context, then, film history was first preserved and is now endangered as videotape history. VHS, Betamax, and three-quarter inch U-matic tapes, as well as their respective playback technologies, are already archival artifacts as carefully preserved as celluloid.8 I vividly recall, on a visit to the short film archives of the Mowelfund Institute in 2005, seeing a roomful of old audiovisual equipment that had been cannibalized for parts to keep a single U-matic videocassette deck in working condition. Such archives are not only invaluable collections of media; they are also little “museums of obsolete technology,” in Alexander Stille’s apt phrase.9

Nor is the archival problem reducible to analog video. Given the short-lived nature of technological formats in an era of accelerating media obsolescence, Lucas Hilderbrand’s emphatic warning bears repeating: “digitization is not preservation.”10 Clay tablets and medieval parchment are more long wearing than modern acidic paper; black and white photographs are more stable over time than color photographs; the shelf life of celluloid motion pictures exceeds the twenty year lifespan of videotape, which is double the estimated decade-long stability of digital storage.11

In an age when media obsolescence is more recognizable than ever, the pressure of impending archival loss provokes a demand for historical reckoning. The Philippine archival situation is grim, but the response of historically-minded film buffs can sometimes take an inspired, playful form. This is the case for the campy period film Pepot Artista (Pepot the Movie Star, 2005), an independent digital film written and directed by Philippine film critic, historian, and archivist Clodualdo del Mundo, Jr.12

Pepot Artista recreates the movie-mad culture of the early 1970s, a milieu dominated by the superstardom of Nora Aunor (affectionately referred to as “Guy” by her fans) and Tirso Cruz III (nicknamed “Pip” by his devotees), who were romantically linked both on- and off-screen. The child protagonist Pepot (Elijah Castillo) is the impoverished moviegoer-as-dreamer: a little boy who sells komiks (comic book-sized movie magazines) on the street, Pepot dreams of emulating his screen idols: the action star Fernando Poe, Jr. (“FPJ”) and teen icons Guy and Pip. 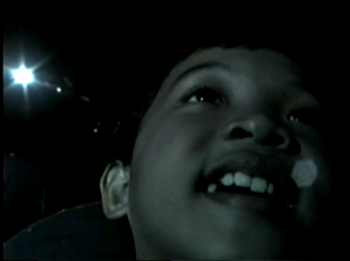 The star-struck Pepot looks up at the screen, the beam of a film projector behind him.

Pepot’s story in the 1970s is framed by the retrospective voice-over narration of a present-day movie writer. As the Narrator (Noni Buencamino) realizes his lifelong dream of telling Pepot’s story, the film’s three-tiered structure, built on the motif of cinephilic dreaming, is laid bare. Pepot’s dream of superstardom and the Narrator’s dream of recounting Pepot’s tale parallel the filmmaker’s offscreen archival dreams: del Mundo’s important 2004 monograph, Dreaming of a National Audio-Visual Archive, had drawn attention to Philippine cinema’s archive crisis a year before the film’s release.13 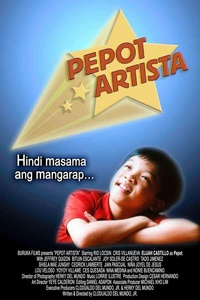 Archival footage is central to the film’s appeal. Excerpts from the Manuel Silos classic Biyaya ng Lupa (Blessings of the Land, 1959), the FPJ action flick Alas, Hari, at Sota (1971), and the Nora Aunor teen romance Lollipops and Roses (1971) address knowing film buffs while offering cinematic pedagogy for moviegoers who have never seen these films. Pepot’s contagious cinephilia, then, can evoke a longing for films one has never seen, initiating spectators into the popular pleasures of the archive. This, in fact, is the important work Pepot does for my own teaching of Philippine Cinema.14 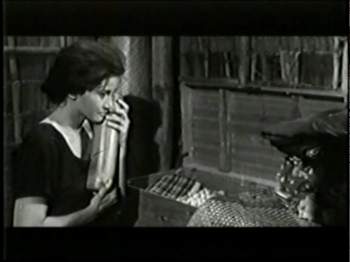 Excerpts from older films like Biyaya ng Lupa (Blessings of the Land, 1959) are interspersed throughout Pepot Artista.

The joke of an early scene is that an unnamed motorist who buys a magazine about Guy and Pip is the actor Tirso Cruz III himself. The joke plays on deliberate anachronisms: the actor as he looks in 2005 makes an appearance in the diegetic world of the seventies, and archival footage of Guy and Pip as youthful matinee idols are juxtaposed alongside the visage of the older actor in the present day. Pepot’s buddy fails to recognize Pip, but Pepot and the offscreen spectator do. Pepot’s cross-generational, anachronistic gaze of recognition at Pip functions as an inside joke, both a cinephilic homage to pop icons and a self-reflexive jab at the film’s nostalgic recreation of the seventies. 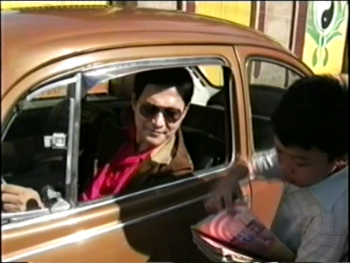 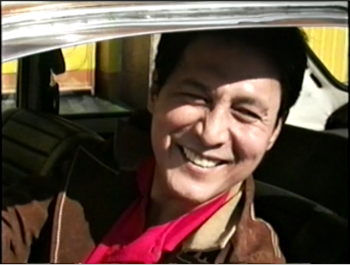 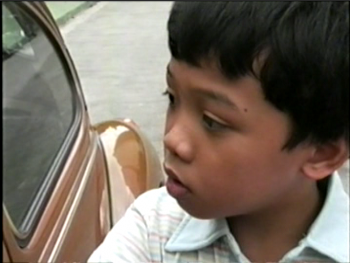 An anachronistic inside joke in Pepot Artista: the actor Tirso Cruz III in 2005 plays himself in the seventies; Pepot recognizes him.

The interspersed footage from Guy and Pip (1971) features Maria Leonora Teresa, a three-foot-tall ceramic doll to whom the teen stars croon a hit ballad. Guy and Pip’s famous white “love child” is parodied in a later scene. Pepot fantasizes that he has been adopted by Guy and Pip impersonators; he joins their act, playing the transvestite part of their doll-daughter. 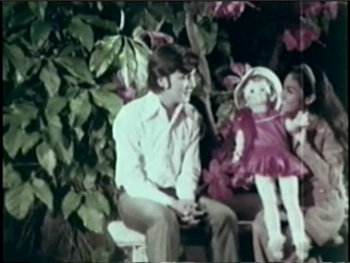 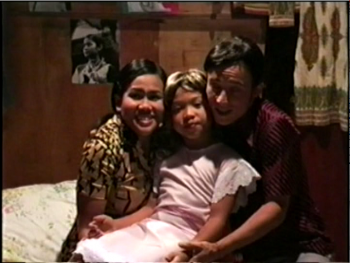 …is parodied by Pepot in drag.

Pepot’s gendered and racialized impersonation of the inanimate blonde doll is also a form of temporal drag.15 Retrospectively inscribed onto the cross-dressing body of the young boy’s fandom is the foreknowledge that Nora Aunor’s gay male following would grow steadily in the years to come. In a kind of temporal condensation, the nostalgia of our own decade and a foreshadowing of 1980s films thematizing fandom are rear-projected onto Pepot, a queer child of the early seventies. 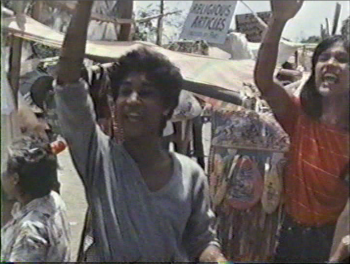 In the context of Philippine cinema’s fragile and fast-declining film and media archive, Pepot Artista’s inside jokes and archival footage fold the old into the new, enacting the survival of nearly-forgotten popular pleasures. Pepot’s wellspring is the affective archive of a filmmaker-preservationist, a fandom steeped in history.

My thanks to Vicky Belarmino and Mary del Pilar, both members of SOFIA, the Society of Filipino Archivists for Film. See http://dev.martinisantos.com/sofia/.