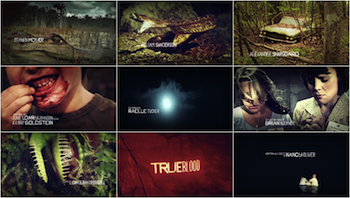 Opening title sequences seduce, invite, prepare and inform their audiences. Frequently foregrounded and formally complex, the opening sequence can attain a level of import far beyond its introductory capacity. Forming a kind of audiovisual contract with the viewer, television opening credits represent a privileged space of narrational suspension, cognitive mapping, libinidal activation and spectatorial engagement: in short, they can be both a space of pure pleasure in image and sound and one that sets the stage, tone and atmosphere for the ensuing action. Especially when accompanied by a voice-over, they frequently also offer essential narrative points and information. For all of this significance, import and visibility, the opening credit is a much under-theorized and under-analyzed audiovisual space. Despite numerous websites, blogs and internet top ten lists, there is very little scholarly research into the space of the opening sequence in either film or television.

Indeed, because of the television series’s fundamental repetitive seriality, the opening sequence is a particularly integral and intriguing field for analysis, a fact that networks such as Showtime and HBO have recently recognized if we look at recent innovations in their series’ title designs. The willing viewing of, and listening to, the opening sequence of a TV series on a weekly, daily or hourly basis (depending on your viewing situation) is a unique spectatorial experience suggestive of the potential import of the space of the credits. It is crucial to remember here that this audiovisual experience is absolutely optional in televisual viewing – there are no implicit norms, coercive forms or social prohibitions in the viewing or non-viewing of opening televisual sequences. Whether viewed streaming on-air, on video or downloaded online, the attention paid to the opening sequence is a non-compulsory and discretionary activity.

It is also an audiovisual experience imbued with intense pleasure, concentration and engagement. A quick look at a few key websites considering opening sequences as well as a glance at youtube remakes of openings indicates the level of audience engagement in these seemingly secondary, formally non-diegetic, paratextual televisual moments that frequently have little to do directly with series content. Producers, designers and composers have clearly noticed this power of the opening sequence. For instance, the work of Los Angeles based a52 and Seattle’s Digital Kitchen have garnered awards, attention and a wide popularity verging on cult fandom with sequences characterized by atmospheric, tonal and audiovisual sophistication and ambiguity. Together, these two design companies are responsible for a large number of the television title sequences shortlisted by different internet and fan sites: Dexter, Six Feet Under, True Blood, Nip/ Tuck (Digital Kitchen) and Carnivale, Deadwood and Rome (a52). Sharing stylistic experimentation, all of these opening sequences suggest the powerful emotive and tonal paratextuality of the title sequence. 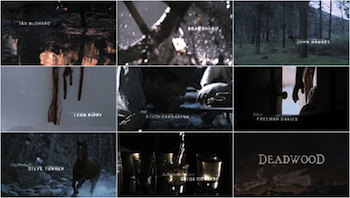 Although stemming from a literary framework, Gerard Genette’s concept of the paratext has been an influential one in media studies. In a media context, it indicates not only the space of the opening and closing credits, but also advertising, fandom and trailers and other elements that work alongside a text (in this case a film, television show or series), but that are not strictly a part of the main diegesis of that text. With opening title sequences, we see the way this concept both productively expands and problematically restricts the critical engagement with main title design: as the afterlives, fandom and aesthetic appreciation of main titles indicates, many sequences acquire a textual status that operates in conjunction with the main text but not in a secondary parasitical relationship. In this way, opening credits can be (and sometimes are) seen as short films, works of art in their own right and not simply a medium for advertising the main text. This can be tied to the willingness of audiences to engage in repeat viewings: there is an appreciation and pleasure in the sequence itself that cannot be accounted for by the textual analogue of the book jacket cover.

In order to explore this in a little depth I want to look at the affective engagement, abstraction and experimentation in the paratextual space of the opening credits for True Blood [view] and Deadwood [view]. Both of these opening sequences are marked by central ambiguities, as the openings give impressions and tone but relatively little information. This ambiguity is key as the sequences work on an abstract rather than narrational level: neither of these sequences is particularly informative about the series, neither clearly indicates narrative focus, genre or story and neither features a central character. In these sequences, we have no real sense of characters or storylines, yet each is strong in conveying atmosphere, a sense of the historical past and a tonal gothic.

In both Deadwood and True Blood, the emphases are emotional and abstractly conceptual: suggestive of the series and poignant to those familiar with the show, the sequences on their own contain little that is informative or preparatory for the viewer. For example, the opening of True Blood trades in a kind southern gothic through a blending of archival footage of religious ritual, clansmen, animal decay and violence and erotic spectacle. Other than the billboard decrying fangs, there is no indication of the series’ concentration on vampires and the supernatural; instead, natural decay and degradation pair with images suggestive of a strong desire for human interaction, sexual and spiritual. As the producer for True Blood Alan Ball has noted, the opening for the series works toward abstract conceptualism, rather than narrational detail: “I wanted a sense of the twin polarities of the need for transcendence as it plays out in the rural south – of church and sort of whipping yourself up into an evangelical frenzy and the honkytonk on Saturday night where you basically do the same thing only through drugs and hooking up and getting into brawls.” 1

Similarly trading in abstracted and aesthetically beautiful imagery, Deadwood’s opening sequence gives a sense of period and place, but only in very non-specific terms. Fractured images of a butcher, the radiance of blood running down a white screen and a horse running in the wild coalesce to emphasize a vague sense of the dialectic of freedom and restraint, life and death. The brownness of the series’ cinematography is given this privileged moment of quiet respite as the isolated images invite a concentration that the cacophony and muddiness of the actual series does not allow. These effects are intensified in the musical opening that offers the plaintive strains of a fiddle that is tonal and pleasurable, but also indicative of melancholy and loss.

I emphasize the auditory aspect, because it is crucial to recognize the place of music in the opening credits. Title songs or themes set tone, mood and play a significant role in both the appeal (or lack of appeal) of the title sequence and the pleasures that can be found in its repeated viewing. Studies on music and cognition have shown that familiarity breeds enjoyment: we are more apt to like a piece of music the more often we hear it, a fact known by mainstream radio, music and culture industries. Together with the experimental, fractured and imagistically oriented visual track of both of these openings, the title music works to mark the opening sequence as a distinct and singular space: David Schwartz’s innovative opening theme “featuring Fiddle, Cavaquinho, Weissenborn, Guitar, Harmonium, Duduk, and Kitchen Pots,” and Jace Everett’s country song “Bad Things” have both taken on lives outside their series-based paratextuality, a status reflected in the opening sequences themselves.

Not merely ancillary, informational, functional, commercially based advertisements for the series, the opening sequence is both an integral part of both Deadwood and True Blood (and many others) and a textually cohesive, if not totally independent, cultural and aesthetic object. Engaging in a contract with the repeat viewer, luring in the neophyte and seducing all, the well designed opening sequence surpasses the boundaries of paratextuality to become a ritualistic event, enacted before every viewing and appreciated as a unique televisual moment, one that becomes more exceptional in its serial repetition.