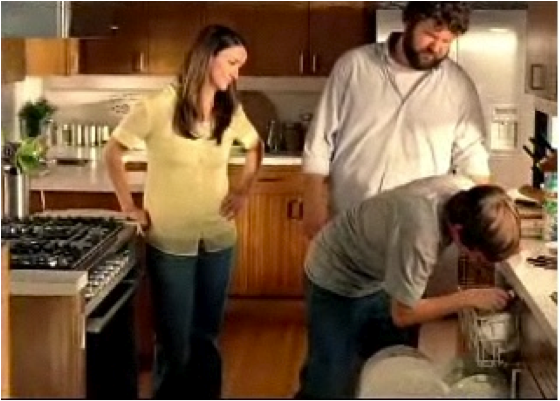 A mother walks into her kitchen, surprised to find her husband and son busy at the dishwasher. The husband explains that he set a record for the most dishes cleaned in one load, 61 dishes and a garlic press, and that the son is trying to beat it. His wife insists that 61 dishes will overcrowd the dishwasher and some dishes will not get clean, to which the husband retorts, “Got clean when I broke the record!” He continues to hover over the son, sabotaging his efforts, as the wife looks on, disgruntled.

Commercial advertising persists as one of the most contentious sites of ideological discussion in mass media. Especially in T.V. commercials, where time constraints limit the range of complex narratives, advertisers must rely on what attracts its target audience. By relying on standard narratives forms, advertisers “reduce production costs, and conform to audience expectations.”1 Some industries, like household cleaning aids, rely on a traditional selling points and representations to sell their products. Household cleaner commercials—dish washing aids, laundry detergents, surface cleaners, etc.—generally target women, especially mothers, and portray women in their advertisements. They are stewards in the domestic space, concerned with the cleanliness and health of the home.

Men or male figures do feature in household cleaner ads, but generally to reinforce the woman as the active cleaner. Husbands often appear in the periphery, either separate from the action or a cleaning novice who looks to the wife to find the solution. This tradition has been challenged over time, with commercials that feature men as cleaners (usually inadequate ones2 ). More recent campaigns by prominent brands—Tide and Cascade of Procter & Gamble, and also the emerging “green” company Seventh Generation—complicate the role of the father and husband as participants in the maintenance of the home.

The female homemaker is traditionally the protagonist and often the only character in a household cleaner advertisement. Even when children or husbands are present, it is typically the singular task of the mother to clean spills, wash clothes and generally maintain the beautiful home. Other family members represent a kind of playful chaos, which only the mother’s determination and work ethic can counteract. While the product may lighten her workload, it is still her responsibility to buy, use and enjoy the products. It is also important that the woman finds contentment in the clean home. At the conclusion of a commercial, we will often see the triumphant and serene smile on the woman’s face as she surveys her domestic landscape.

The recent Cascade campaign (2009-present) parodies the traditional household cleaning narrative, upsetting the “natural order” in the home, but does not overthrow the ideologies inherent in the more traditional narrative. The Cascade commercial referred to as “World Record”—noted in the introduction of this paper—follows a traditional narrative arc of a household cleaner commercial; the dishwasher is dirty, we hear about the cleaning power of Cascade and the dishes are cleaned.3 It is instead the dynamics between the characters that deviate from the norm. Instead of ending in bliss, the ad leaves us with a sense of disorder in the home. First, the introduction of the husband as the cleaner is jarring. Although the wife holds the traditional knowledge—that a “too full” dishwasher will never properly clean the dishes—the husband has learned that the power of Cascade can overcome a full dishwasher. However, because the commercial is comedic, we excuse these abnormal occurrences; the masculine competition in a traditionally domestic site, and more importantly, that Dad is cleaning. Because of the unreliable nature of the family narrative in this commercial, we do not see the father as a steward of the home, and the tradition of the feminine domestic sphere is not challenged.

Another commercial, Tide’s “Busted,” takes the man’s role as cleaner a little further. In the advertisement, the father stains his wife’s tablecloth while eating a Sloppy Joe, but gets it out with Tide, thereby avoiding trouble. The wife/mother is absent during the entire process, and the father and sons clean Mom’s tablecloth, which provides them with a sort of bonding and learning experience.4 In the Tide ad, the woman is visually absent and therefore independent of the domestic scene, but we still acknowledge her as the maintainer of cleanliness. It is Mom’s tablecloth and she is one who will be upset to see it ruined. The father, on the other hand, enjoys a carefree, “plate-less” meal with his sons. He may be the one who cleans it up, but he is still representative of chaos and messiness. Just as in the Cascade ad, the husband takes over the role of cleaner, but does not challenge the wife’s as the primary arbiter of cleanliness.

Men also tend to appear in household cleaner commercials that do not include the act of cleaning, thereby bypassing the danger of feminization. Many advertisers focus on their brand “story” as opposed to the efficacy of the product. Often referred to as the self-congruity theory, advertisers align the personality of their brands with the perceived personality of their consumers, hoping to establish brand loyalty.5 My first example brings us back to the Tide brand, with a commercial called “Dad.” Like the earlier Tide commercial in this paper, we see another man and his son. The primary shot zooms out from the baby’s face, strategically catching the father’s wedding ring and eventually widening to a touching scene of the two napping on a clean set of linens. The soft female vocals in the background express a (woman’s) need to be with the family, the two we see napping in the shot. The ad may feature male characters, but the ultimate audience is the absent mother, similar to the other Tide ad, “Busted.”

Seventh Generation, the eco-conscious household and hygienic care company, also approaches the household cleaner commercial as a chance to express their company mission over the efficiency of the products. Known as “Protect Planet Home,” the campaign supports sustainable, environmentally friendly world.6 The aired T.V. commercial depicts slices of life from different characters’ points of view. Some are men, some are women, but the important element to note is that no one is actively cleaning. The commercial focuses on responsibility of consumers to buy “green” products and promote a verdant, harmonious world (as seen below in the last shot of the advertisement). For Seventh Generation, the consumer may be male or female, but the duty of cleaning is not addressed and therefore does not place the the man, or anyone, as the primary maintainer of the clean home. 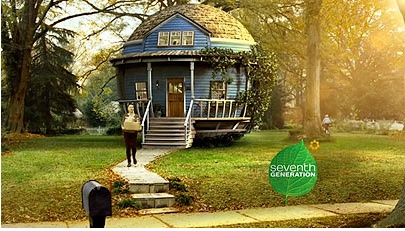 Household cleaner commercials are no longer limited to the product comparison or cause-and-effect narratives that only feature women in the home. As we’ve seen, men have entered the domestic space as participants in maintaining a clean home. In addition, commercials have stepped outside the act of cleaning and focused more on the lifestyles of their consumer markets. Ultimately, the household cleaner commercial is about family and harmony in the home. As such, it behooves advertisers to maintain a traditional—or at least non-controversial—depiction of the family, focusing on women as the primary consumers and homemakers, and men as their helpers.