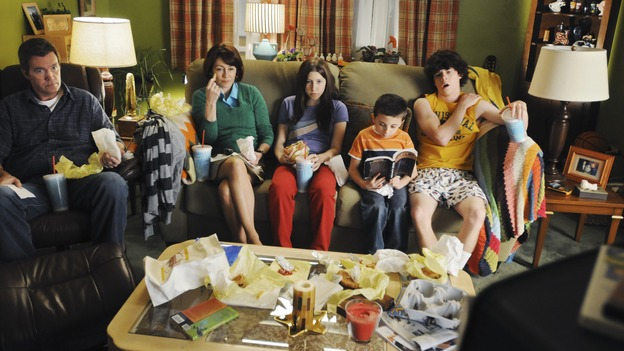 According to the show’s adult stars, Patricia Heaton and Neil Flynn, the title The Middle refers to the middle of the country (the family resides in the fictional town of Orson, Indiana), middle age, and middle class. These first two descriptors are correct, but the third is questionable. Even Flynn doubts this label in an on-camera interview with TV Guide when he says that middle income or middle class is something “these people would be lucky to claim.” Indeed, one look at the Heck family’s 1970s ranch-style home, modest blue sedan, fast-food eating habits, unflattering clothes, and occupations (manager of a quarry and a used-car saleswoman) suggests that, despite its title, The Middle is not a middle-class American sitcom. To be placed in that category the show would need to feature relatively affluent settings, prestigious professions, and well-groomed characters like those found in Father Knows Best, Bewitched, The Brady Bunch, Family Ties, The Cosby Show, and Modern Family. But it doesn’t; rather, The Middle’s homely mise-en-scene and grassroots-type themes resemble those of working-class sitcoms like The Honeymooners, The Flintstones, All in the Family, Roseanne, The Simpsons, King of Queens, and According to Jim. As a result, we should analyze it as such.1

Richard Butsch has discovered that since its inception, the domestic American television situational comedy has relentlessly manipulated gender traits to suggest that the working class is inferior to the middle class.2 Working-class sitcoms, for example, traditionally feature incompetent, immature, and irrational husbands/fathers who have to be bailed out of inane (yet comical) situations by their capable, responsible, and logical wives (e.g., Alice and Ralph Kramden, Florida and James Evans, Marge and Homer Simpson). Middle-class family sitcoms, on the other hand, usually present both sexes as “a superb team […] intelligent, sensible, and mature,” and neither is devalued or revered in spite of the other (e.g., Carol and Mike Brady, Maggie and Jason Seaver, Claire and Heathcliff Huxtable).3 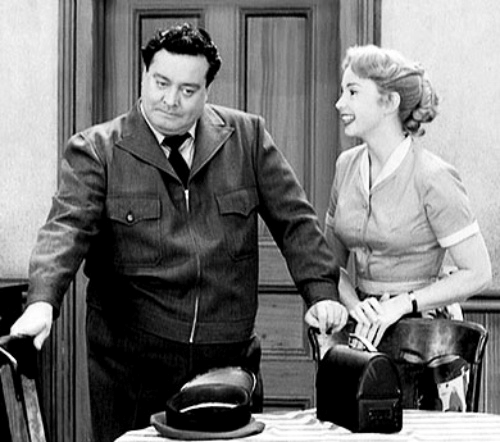 Based on its blue-collar mise-en-scene and themes, ABC’s The Middle — and Mike Heck (Neil Flynn) in particular — should take on the stereotypical character traits of the working-class sitcom. For example, Mike should lack good sense and engage in emotional childish outbursts, Frankie Heck (Patricia Heaton) ought to make up for what Mike lacks in intellect and maturity, and the Heck children — Axl (Charlie McDermott), Sue (Eden Sher), and Brick (Atticus Shaffer) — should best their father mentally and otherwise.4 But this is not the case. Instead, Mike helps his kids with their homework, coaches their spelling-bee competitions, and empathizes with their dating issues. As well, when Frankie has to work late on Thanksgiving and Christmas, he (along with other family members) prepares the turkey feast and shops for presents. Moreover, unlike his working-class sitcom predecessors, Mike responds wisely to delicate situations. For example, when Sue brings home her new boyfriend, whose effeminate mannerisms, interests, and clothes indicate he is gay, Mike suggests that he and wife hold off telling their daughter the truth: “She’ll figure it out eventually…or he will,” he counsels.5 Finally, in contrast to other working-class males like Homer Simpson and Dan Conners (Roseanne’s John Goodman), neither Mike Heck’s children nor his wife ever appears more intelligent or capable than he.6 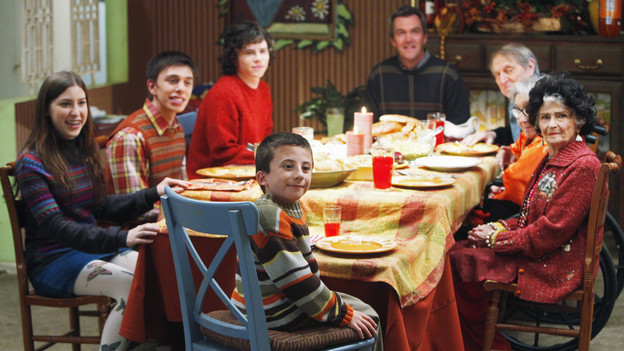 So why this shift? Why would The Middle move away from the buffoonish male stereotype that the working-class sitcom has perfected over half a century? Why would it bestow traits of the middle-class sitcom father — self-assured, admired, competent — on its blue-collar character?7 Three words: the current economy.

The Middle is the only working-class situational comedy to premiere in 2009-2010, and it is the only non-animated working-class domestic American sitcom currently in production as well as the only one set in Middle America.8 One might say, then, that for good or bad, in contemporary popular culture The Middle alone signifies familial life in the Midwest. Now, consider the current unemployment rate: nearly 15 million people, the majority of whom live in blue-collar Michigan (14% jobless) as well as other Midwestern states like Illinois (11.2%) and Ohio (10.9%).9 If we reconcile these two realities, we might conclude that it would be mighty irresponsible and potentially risky of ABC to depict its sole blue-collar husband/father (and family) in the negative manner of the traditional working-class sitcom. Indeed, having a bumbling, unthinking, incompetent man represent the multitude of out-of-work and undervalued Midwestern blue-collar males at this time, in this economy, in this job market would be unquestionably insensitive and out of touch. It’s just a shame that such a positive modification had to derive from such a dismal real-life situation.