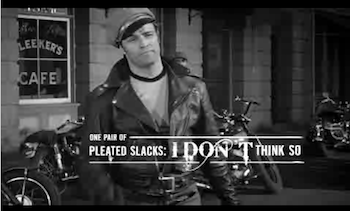 The online accumulation of archival footage of Hollywood stars (both routine and rare) has generated a surge of video appropriations. Found footage or archival films, once screened only in museums, festivals, and classrooms, are now one of the most dominant forms of user-generated content on YouTube and other online archives. This proliferation of appropriative content is transforming not only our understanding of how archives are constructed and excavated but also our understanding of the contemporary star system. Of the many stars whose images have been (literally) reshaped by archival practices in the YouTube era, Marlon Brando’s posthumous conversion from the post-classical Brando (the fat expatriate) to the classical Brando (the virile American icon) offers a particularly valuable example of the archival preservation and restoration of stardom. Since his death in 2004 (just before the birth of YouTube), several archival maneuvers have restored the classical Brando as the dominant image of the once-fallen star in contemporary culture, recuperating his compromised star power for commercial ends.

Brando’s archival rebranding has emerged not only on YouTube but also on television. Last summer Mastercard released a new installment in the long-running Priceless commercial campaign – a commercial featuring a series of icons of style rebellion in visual anticipation of the tagline “A perfect pair of jeans – Priceless.” The 30-second commercial combines Billy Crudup’s ubiquitous voiceover, David Bowie’s “The Jean Genie,” and archival images of an eclectic set of jean-clad stars: Marlon Brando, Carlos Santana, John Wayne, Marilyn Monroe, The Ramones, and – once again – Marlon Brando. Footage of Marlon Brando from The Wild One both opens and closes this short commercial, becoming the most resonant image in the Priceless “Break in Your Jeans” campaign, a promotional contest announced in the commercial. The final cinematic image of Brando on his bike becomes an animated icon of a generic male figure on a motorcycle in the online and print campaigns for the contest, promising the perfect pair of jeans and a trip to the destination of your choice to the winner and transforming Brando into an animated icon of corporately-mediated rebellion.

View the ad at Brightcove.

The commercial brings together star images from a range of media contexts and stylistic sensibilities. The thin denim thread that connects these stars would suggest an attempt to target as broad an audience as possible, but the commercial resists the temptation to establish cultural breadth through its archival excavation, limiting its footage to canonical, even classical, films and concerts. This historical focus locates the “pricelessness” of denim-based cool in the past; these star images would at first seem to resonate more with the Greatest Generation than Generation Y. The campaign for the promotional contest, however, features an image of a young couple about to embark on their Mastercard-funded adventure. The commercial’s inter-generational appeal relies on the audience’s ability to recognize if not each individual star within the commercial then the cumulative cool of their combined star images. While the viewer may not be able to identify The Wild One as the film from which the iconic Brando footage is drawn (or even that the actor is Marlon Brando, as a recent screening of the commercial to a group of students revealed), he will be able to recognize Brando as an icon of American masculinity adorned in not only denim but also leather and metal. Brando’s star image in this commercial functions both as a specific icon (for those viewers who can access memories of Brando’s performance in The Wild One and his other early triumphs of Method rebellion) and as a generic icon (for those viewers who may not be able to identify Brando but who can identify the brand of masculinity Mastercard is marketing.) Mastercard’s Priceless Jeans campaign offers consumers (and particularly male consumers) the reassurance that adventure and cool don’t come with a high price tag, that the perfect pair of jeans is more essential to the visual construction of American masculinity than any luxury item – welcome news during a long economic recession that has left many consumers unemployed. The image of Brando as Johnny Strabler sitting on his motorcycle becomes a corporate emblem of a cross-generational glamour available to everyone.

Released five years after Brando’s death, the Mastercard commercial both re-glamorizes and re-Americanizes Brando’s image after decades of decline. This posthumous cultural recuperation of Brando’s stardom effaces the later images of the fat Brando who struggled under the weight of his professional ambivalence, his political commitments, and his family dramas. The Priceless campaign’s archival appropriation locates Brando in 1953 before professional and personal chaos would mar the purity and legibility of his iconicity. The attempt to fix a star image in a particular (youthful) historical moment isn’t a novel practice; the isolation of moments of perfect beauty drives the celebrity industries. The Mastercard commercial, however, presents Brando as an icon of American masculinity – linked to the images of John Wayne in the same commercial. Despite his long residence as an expatriate in Tahiti, his multilingual forays into European co-production, and his outspoken critiques of American and Hollywood domestic and international policies, Brando emerges in the commercial as a symbol of sanctioned American defiance rather than international decadence. By detaching this footage from the mounting archival evidence of Brando’s commercially destructive nonconformity, Mastercard adapts the archival strategies of fan videos and other found footage films in order to re-present the reluctant star as an emblem of American consumerism. 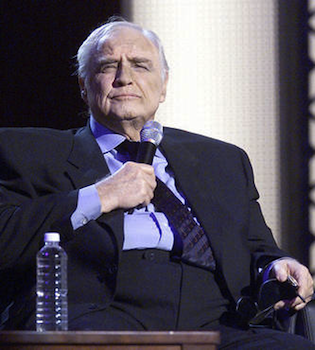 Brando interviewed in his later years

Brando’s resistance to the commercial exploitation of star images surfaces in formerly elusive interview footage from the 1966 Maysles film Meet Marlon Brando, one of several new entries in the online archive of screen tests, interviews, and other paratextual clips that restore Brando’s visual, cultural, and commercial appeal. Until recently, the film was difficult to find. Now the 28 minute documentary has been posted in three parts on YouTube, providing fans an opportunity to watch Brando interact with a series of journalists to promote the film Morituri. In the interviews, Brando makes little effort to conceal his ambivalence about the film, choosing instead to use the occasion of the interviews to reminisce about his midwestern childhood and to lampoon the ways in which film stars are expected to sell a variety of products (including themselves.) Flirting with the beauty queen-turned-journalist Mary Fran and other young female journalists to the amusement of their male counterparts, Brando describes himself as a “husker” in reference to his Nebraska roots but resists the industrial imposition of a new identity as a “huckster.” Using the same coquettish charm we see on display in another recent archival discovery – Brando’s early screen test for a film called Rebel Without a Cause (not, as some commentators have concluded, the same film that later starred James Dean) – Brando laments the influence of cultural tastemakers like “Hedda Hawker” and the conversion of actors into “sellable items” who in turn sell other items.


Marlon Brando Screen test: “Rebel Without a Cause”

At every turn, Brando refuses the invitation to plug Morituri, discussing instead a range of irrelevant topics – from the public ignorance of the obstacles facing Native Americans to the beauty of his female interviewers. Moving comfortably if not expertly from English to French to German during the series of interviews, Brando communicates his discomfort with celebrity without alienating those reporters who seek to mine that celebrity. The interviews are by any measure (other than the studio’s) a success, failing to promote Morituri but managing instead to promote its star. The emphasis on Brando’s Method acting in the reception of his film roles (both the celebrated and the denigrated) may have distracted critics, scholars, and fans from the recognition of Brando’s ambivalent hucksterism, his ability to sell a performance, an image, or a film without subduing his hostility toward the system that produces and markets those performances, images, and films as products.

The archival evidence of Brando’s commercial recalcitrance in the Meet Marlon Brando interviews only strengthens the consumer appeal of his archival cameo in the Mastercard commercial. The commercial doesn’t introduce Brando as a model of consumer behavior; rather, it presents Brando as a model of resistance, whose well-worn jeans become the focal point of a visual ensemble of cultural defiance. The husker-turned-rebel (visually interchangeable for some contemporary audiences with the rebel without a cause) becomes a husker-turned-huckster whose archival avatar unknowingly sells an image that anyone with a Mastercard can buy.